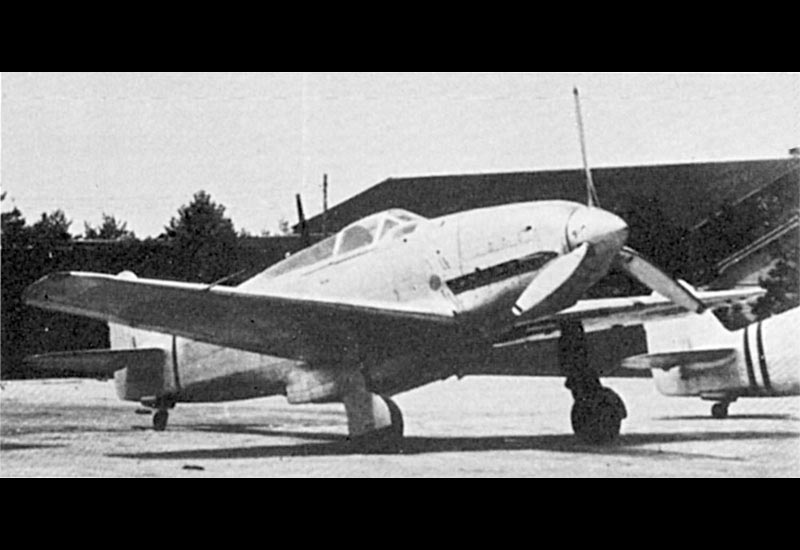 The Kawasaki Ki-60 was an ultimately abandoned interceptor/fighter design that was attempted as early as 1941 with the program born to an Imperial Japanese Army (IJA) requirement for such an aircraft in 1939. The fighter would utilize a liquid-cooled inline piston engine and refined aerodynamics to promote a strong rate-of-climb while utilizing cannon as primary armament to contend with the latest in Allied offerings - particularly the larger, heavier bomber types. The engine of choice became the German Daimler-Benz DB 601 series inline which was locally manufactured in Japan as the Kawasaki "Ha-40", set to deliver 1,175 horsepower output. Kawasaki also undertook the design and development of the airframe and this work was attributed to engineers Takeo Doi and Shin Owada. Doi ultimately participated in several notable Japanese aircraft designs including the Ki-45 "Toryu" heavy fighter and Ki-100 fighter.

The Ki-60 was to become a part of a two-phase program, the Ki-60 representing the heavier, cannon-armed interceptor against the lighter, machine gun-armed fighter in the Ki-61 "Hien". Work on the Ki-60 began in February of 1940 and led to a completed, flyable form by March of 1941. By this time, the Japanese Empire was fully embroiled in the World War against the major parties of the Pacific Theater, primarily the British along with her commonwealth allies (it would not be until December of 1941 that the United States would officially declare war on Japan).

The Ki-60 was originally intended to carry 2 x 0.50 caliber Ho-103 heavy machine guns in the nose and 2 x 20mm Mauser MG 151 cannons in the wings which would have given it formidable firepower against any modern aircraft type of the period. The nose guns were synchronized to fire through the spinning propeller blades and installed slightly offset from one another - the left-side gun projecting slightly further than the right-side installation. The Mauser cannons were fitted in the wings, one gun to a wing. While slower firing and with a limited ammunition supply compared to the machine guns, cannons were excellent in bringing down larger bomber aircraft whose frames were keen to absorb much punishment from machine gun weapons. A single cannon shell could wreak havoc through a direct hit on an engine, therefore putting the entire bomber in jeopardy. As an interceptor, the Ki-60 did not require provision for external munitions such as bombs and no mention of aerial rockets was made.

The Ki-60 was of a largely conventional external configuration with the engine set within a forward compartment, the cockpit at the middle and a tapered empennage. The inline engine drove a three-bladed propeller assembly which was synchronized with two machine guns mounted in the cowling. The cockpit was set just ahead of midships with adequate views over the nose and to the sides. The canopy was lightly frames with a raised spine aft, though the aft section was completed as transparent to improve views to the "six". The raised spine projected a deep fuselage for the aircraft, as did the radiator installation between the wing main units. Each main wing unit was straight in its design with rounded tips and housed a cannon or machine gun installation with their applicable ammunition supply. The tail unit sported a single vertical fin (rounded) and low-set horizontal planes. The undercarriage included a pair of retractable main legs (single wheeled) and a tail wheel. This presented the aircraft with a "nose up" appearance when at rest and, coupled to the poor visibility out of the cockpit, made for tricky ground running and taxiing for the pilot.

As built, the prototype Ki-60 tested below expectations, proving too heavy and sluggish at the controls than expected and providing some dangerous flight characteristics to boot. Her top recorded speed was just 350 miles per hour. As such, the follow-up prototypes were revised while they were still under construction at Kawasaki. The Mauser cannons were dropped to reduce weight and replaced by lighter Ho-103 heavy machine guns instead - in effect reducing the interceptor's general effectiveness in combat to just four machine guns. The wing area was increased for better stability and general aerodynamic refinements to the fuselage were made. A second and third prototype were ultimately completed to this new standard but only managed to increase maximum speed by 10 miles per hour while their climb rate was pedestrian for an interceptor type - reaching 16,000 feet in six minutes. The listed operating ceiling was a useful 32,800 feet.

With the Imperial Japanese commitment now spread into Asia and across the vast Pacific, troublesome projects like the Ki-60 were abandoned - only the three prototypes ever completed. The Ki-61 "Hien" fighter continued development (borrowing some of the lessons learned in the Ki-60 development) and managed to be built in 3,159 examples for the IJAAF, the first batches beginning service in 1943. This model also begat the Ki-100 fighter which appeared in 395 examples in the early part of 1945. The IJAAF used the Nakajima Ki-44 "Shoki" fighter as an interceptor to replace the original Ki-60 specification and these aircraft emerged in 1942 and saw 1,225 produced before the end of the war in September of 1945.

Values are derrived from a variety of categories related to the design, overall function, and historical influence of this aircraft in aviation history.
Overall Rating
The overall rating takes into account over 60 individual factors related to this aircraft entry.
26
Rating is out of a possible 100 points.
Relative Maximum Speed
Hi: 400mph
Lo: 200mph
This entry's maximum listed speed (348mph).