Captured German wartime technology allowed the Soviets to advance their jet fighter programs such as the Sukhoi Su-9 series.

Authored By: Staff Writer | Last Edited: 05/20/2019 | Content ©www.MilitaryFactory.com | The following text is exclusive to this site. 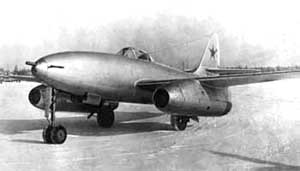 While the concept of the turbojet engine lingered for some time, it was not put into practical use until the latter part of the 1930s with engineers in Britain and Germany both leading the way. The United States and the Soviet Union - all to become major participants in aircraft development during World War 2 - were relatively slower players to emerge with viable turbojet-powered solutions. For the latter, one of the earlier jet-powered fighter attempts became the Sukhoi Su-9 developed from captured German technology by Sukhoi OKB. Work on the type began in 1944 as the Red Army progressed through its bloody offensives, taking German-held ground - and all booty therein - in the process.

The Soviet copy made no qualms about its German design origins for the lines of the famous Messerschmitt Me 262 "Schwalbe" - aviation history's first operational jet fighter - were clearly apparent in the Sukhoi submission. The aircraft was given a well-contoured and smooth fuselage encapsulating the required avionics, cockpit, armament and fuel stores. Wings were straight appendages with underslung engine nacelles, one engine to a wing. The tail consisted of a rounded vertical tail wing and high-set horizontal planes providing an overall traditional arrangement. The pilot sat just ahead of amidships under a three-piece canopy with light framing. The undercarriage consisted of a wholly retractable tricycle arrangement with two single-wheeled main legs and a twin-wheeled nose leg. When at rest, this gave the Su-9 a pronounced "nose-up" appearance. The Su-9 was also completed with an ejection seat, this based on the design of the German Heinkel He 162 "Volksjager" emergency jet fighter.

Armament was concentrated in the nose assembly with barrels protruding a short distance ahead. The arrangement was a mixture consisting of 1 x 37mm Nudelman N-37 cannon and 2 x 23mm Nudelman-Suranov NS-23 cannon. The 37mm fitting was afforded 40 rounds while the twin 23mm installations were fed by 200 projectiles per gun. Such a cannon-only arrangement would become a staple of Soviet jet-powered fighters of the near future. Beyond its dedicated fighter role it was envisioned that the Su-9 would also carry up to 1,100lbs of external stored for when in the fighter-bomber role - a role which saw the airframe outfitted with cockpit armoring for added protection. The original 37mm nose cannon could also be replaced by a larger-caliber 45mm Nudelman N-45 series weapon - though at the cost of total ammunition allowed onboard.

From the outset, it was expected that the Sukhoi design would be powered by a pair of in-house Lyulka TR-1 series turbojets. The TR-1 would become the first Soviet-designed turbojet engine in history and attributed to engineer Arkhip Lyulka himself. Despite its promising scope, the engine ultimately failed due to its poor thrust output (2,800lbs). During early development, the Su-9 was outfitted with outright Soviet copies of the German Junkers Jumo 004B series turbojet.

The war in Europe had ended in May of 1945 and the Pacific War wound down in August of that year. Work progressed on the Sukhoi fighter. The first prototype was not completed until October of 1946 and saw its first flight recorded the following month, proving the design sound for the whole. There continued output thrust issues with the engines which would never be officially resolved before the end of the program. The Su-9 prototype was then featured in an August 1947 flyby over Tushino Airfield. This was also joined by the Su-11 prototype, an Su-9 offshoot fitting Lyulka TR-1 turbojets.

By this time, competing designs from Mikoyan-Gurevich and Yakovlev began to outshine the Sukhoi development. Soviet authorities therefore began to focus on these newer, faster aircraft which essentially forced the Sukhoi fighter project to come to naught - only two prototypes ever being completed (Su-9 and Su-11). The Su-9UT designation would have covered a proposed two-seat trainer of the base Su-9 fighter featuring a second cockpit and limited armament and internal volume. The Su-13 was another proposed evolution of the series, intended to solve the thrust output issue even more so. A night-fighter variant would have been born of this initiative as well.

Soviet Union
(OPERATORS list includes past, present, and future operators when applicable)
✓ Air-to-Air Combat, Fighter
General ability to actively engage other aircraft of similar form and function, typically through guns, missiles, and/or aerial rockets. ✓ Interception
Ability to intercept inbound aerial threats by way of high-performance, typically speed and rate-of-climb. ✓ Ground Attack (Bombing, Strafing)
Ability to conduct aerial bombing of ground targets by way of (but not limited to) guns, bombs, missiles, rockets, and the like. ✓ X-Plane (Developmental, Prototype, Technology Demonstrator)
Aircraft developed for the role of prototyping, technology demonstration, or research / data collection. ✓ Training (General)
Developed ability to be used as a dedicated trainer for student pilots (typically under the supervision of an instructor). 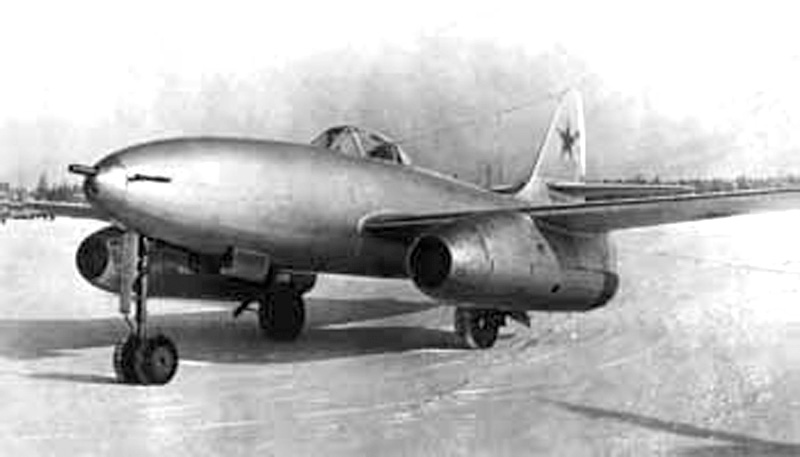