The Schiebel Camcopter S-100 is a rotary-wing Unmanned Aerial Vehicle of Austrian origin.

Authored By: Dan Alex | Last Edited: 06/22/2022 | Content ©www.MilitaryFactory.com | The following text is exclusive to this site. 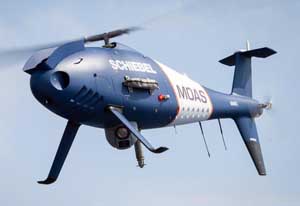 The Schiebel Camcopter S-100 UAS (Unmanned Air System) is a relatively new addition to the world of UAVs (Unmanned Aerial Vehicles) and currently garnering global interest from several notable parties. While dominant examples in the UAV category of the world today are primarily of conventional take-off and landing, the Camcopter is a rotary-wing system with qualities more akin to a helicopter allowing for true Vertical Take-Off and Landing (VTOL), not requiring use of long prepared runways. This drastically broadens the mission scope of such UAVs and makes for a multi-faceted, multi-role platform ready to fulfill a variety of mission requirements regardless of terrain for the discerning UAV-minded customer. The Camcopter S-100 is also billed as a solution that goes beyond military-minded use and can be operated in conjunction with law enforcement and civilian services. For example, such a VTOL system can be used in counter-smuggling operations, environmental disasters, data collection or real-time information reporting.

Austrian-based Schiebel, the concern behind the Camcopter S-100, was founded in 1951 in the field of electronics and branched out into military products during the 1980s, specifically developing battlefield mine detectors. Schiebel then tried its hand in the field of UAVs during the 1990s ultimately delivering their S-100 in 2005. The first S-100 customer became the United Arab Emirates but recent interest has been received from the German, Pakistani and French navies. S-100s are produced out of the Schiebel Wiener Neustadt facility south of Vienna.

The Camcopter S-100 exhibits an very interesting design appearance that sports a shapely "tear-drop" fuselage. The nose is well-formed and dominated by a large grill assembly along its top side and vent slits along its lower areas. The deep portion of the fuselage contains the powerplant while the underside of the fuselage houses the variable payload facilities. The empennage is essentially a short tail section capped by a dorsal and ventral vertical tail fin. The dorsal fin also features vertical tail planes in a "T" arrangement. The ventral tail fin doubles as a tail skid in a three-point stance when the S-100 is at rest. The undercarriage includes the tail skid as well as a pair of wheel-less forward main landing gear legs. The two-blade main rotor assembly sits low against the fuselage spine while the two-blade tail rotor (used to counter the inherent torque rotation caused by the main rotor blades) is set to the portside of the aircraft. S-100 construction includes use of composites with a reinforced internal structure for the rigors and abuse of the battlefield - even in maritime environments. Dimensionally, the S-100 presents a running length of 10 feet with a width of 4 feet and a height of 3.65 feet.©MilitaryFactory.com
Advertisements

Performance-wise, the Camcopter S-100 is cleared to carry up to 110lbs of payload and sports a mission endurance time of 6 hours while reaching out to 124 miles from its Ground Control Station (GGS) within line-of-sight (LoS). These specifications allow the Camcopter to undertake various payload fittings while staying on station for large durations of a mission. Its maximum service ceiling is 18,000 feet and an optional fuel tank can increase operational endurance over 10 hours. Additionally, the VTOL nature of the Camcopter S-100 means that the system can be launched and retrieved from land or sea bases unlike other conventional UAVs requiring runways. This quality has already garnered the interest of several global navies where the S-100s robust nature has proven effective, particularly in the unforgiving at-sea environment. Power is supplied by a 50 horsepower rotary engine allowing for speeds up to 138 miles per hour in short bursts (to best manage endurance).

The entire S-100 package includes the GCS with applicable heavy-duty field laptops, software and pilot control system and officially supports up to two S-100 UAV systems. The S-100 can be fitted with various electro-optical and infrared camera system payloads from various manufacturers and, more recently, radar systems have become optional to the S-100 customer. Other mission-specific payloads can include loudspeakers, communication relays, laser scanners, "Identification Friend or Foe" (IFF), high-powered spotlights and sensors. While not typically armed, the S-100 has been displayed with the Lightweight Multirole Missile (LMM) system affixed to its starboard side, indicating that this VTOL UAV will be able to fulfill a myriad of battlefield roles beyond the usual reconnaissance and surveillance sorties offered by other UAVs. Beyond its standard payload provision, the S-100 can also carry underslung loads for air drops. This is handy is servicing allied personnel requiring supplies "behind enemy lines" or dropping smoke to cover advances/retreats.

The S-100 can be manually managed throughout its mission or operate completely autonomously without human intervention, taking-off and flying to and from preset mission waypoints before coming to an automated landing all its own. The ground operator can intervene at any time during the S-100s operation to suit mission changes. Should the operator ever lose control of his/her UAV, the S-100 is completed with an "automatic home point recovery" function that kicks in. Navigation is via Inertial Navigation System and Global Positioning System.©MilitaryFactory.com
Note: The above text is EXCLUSIVE to the site www.MilitaryFactory.com. It is the product of many hours of research and work made possible with the help of contributors, veterans, insiders, and topic specialists. If you happen upon this text anywhere else on the internet or in print, please let us know at MilitaryFactory AT gmail DOT com so that we may take appropriate action against the offender / offending site and continue to protect this original work.

April 2012 - It was announced that the Camcopter S-100 was successfully trialed from an Italian naval vessel, becoming the first Unammned Air System to do so. The S-100 was fitted with camera equipment during the operation.

May 2013 - A U.S. military-controlled S-100 UAV was claimed by terrorist group al-Shabaab in Somalia.

June 2013 - On June 16th, 2013 pictures were released by Schiebel showing the S-100 Camcopter being evaluated at sea from the flight deck of the French Navy FS L'Adroit P725 patrol vessel. The UAV was covered in an all-red scheme with white tail band.

February 2014 - Schiebel announced that the Italian Navy had officially selected the Camcopter S-100 as its primary UAS. The vehicle became the first such aircraft to fly from an Italian ship during evaluations (back in 2012).

October 2015 - It was announced that the South African Navy had successfully tested the Camcopter aboard its vessel, SAS Protea. The tests ran from October 20th to the 23rd and featured the Selex ES SAGE Electronic Support Measure (ESM) system used for maritime surveillance and anti-piracy work.

August 2020 - The Camcopter has been demonstrated, through a flight to an offshore platform, in attempt to interest the Oil and Gas industry on the lower-cost unmanned air vehicle in the supplies and equipment delivery role. Currently, manned helicopters are the primary means of offshore distribution.

(Showcased performance specifications pertain to the base Schiebel Camcopter S-100 production variant. Performance specifications showcased above are subject to environmental factors as well as aircraft configuration. Estimates are made when Real Data not available. Compare this aircraft entry against any other in our database or View aircraft by powerplant type)
None. Mission-payload largely of sensors, optics and mission-specific equipment such as loudspeakers and spotlights. Two hardpoints available.

Proposed armed configurations have been displayed with ligthweight air-to-surface missiles.

General Assessment
Firepower
Performance
Survivability
Versatility
Impact
Values are derrived from a variety of categories related to the design, overall function, and historical influence of this aircraft in aviation history.
Overall Rating
The overall rating takes into account over 60 individual factors related to this aircraft entry.
92
Rating is out of a possible 100 points.
Relative Maximum Speed
Hi: 150mph
Lo: 75mph
This entry's maximum listed speed (137mph). 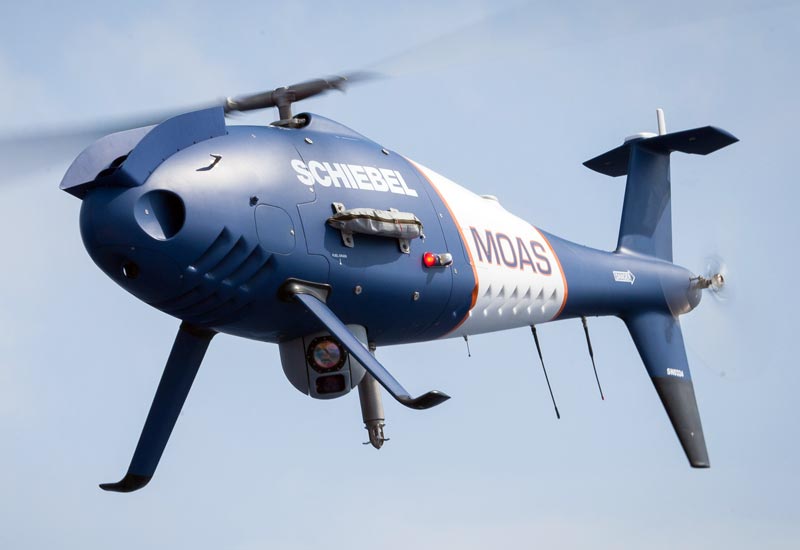 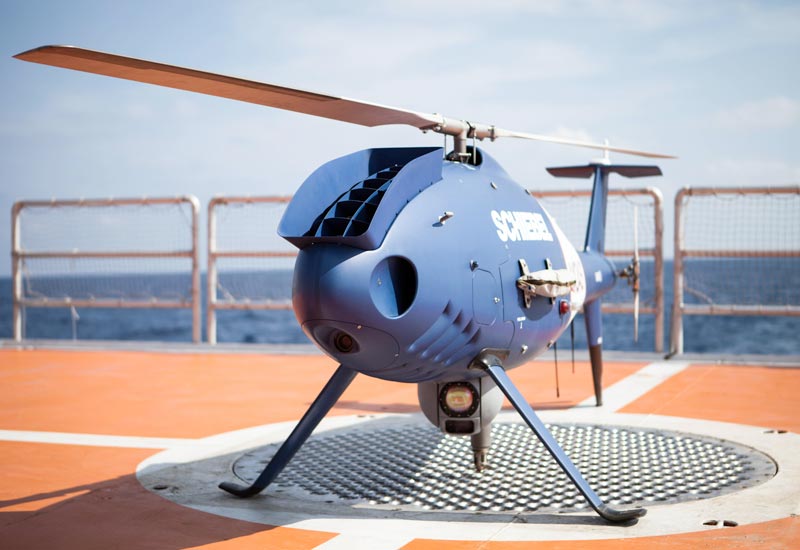 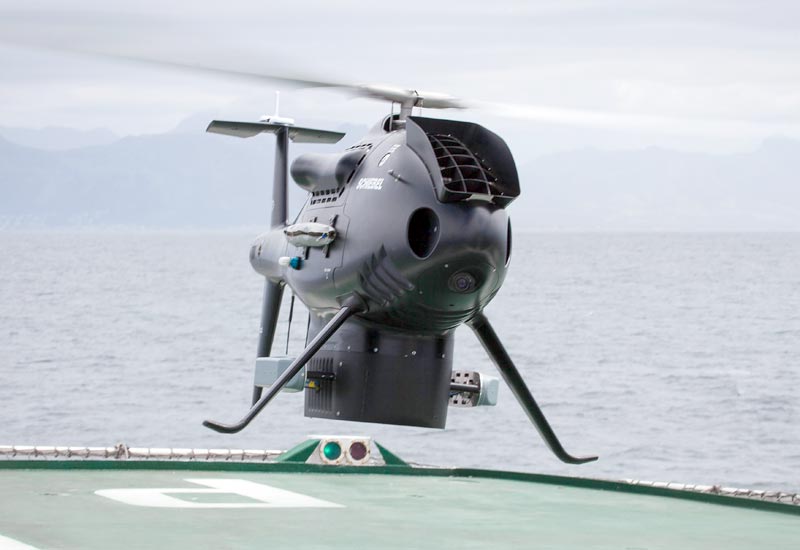 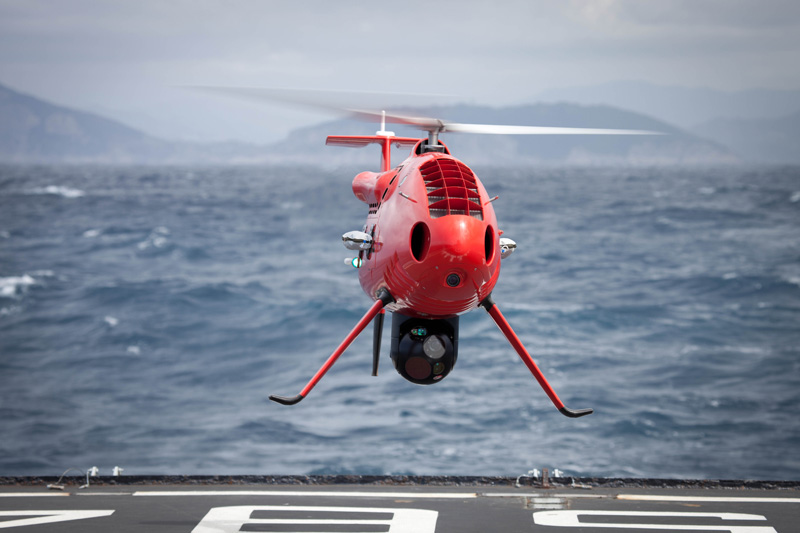 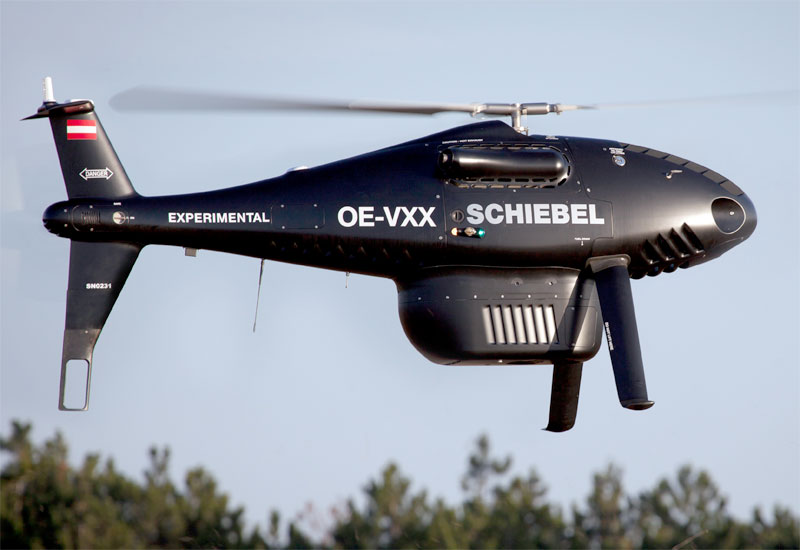 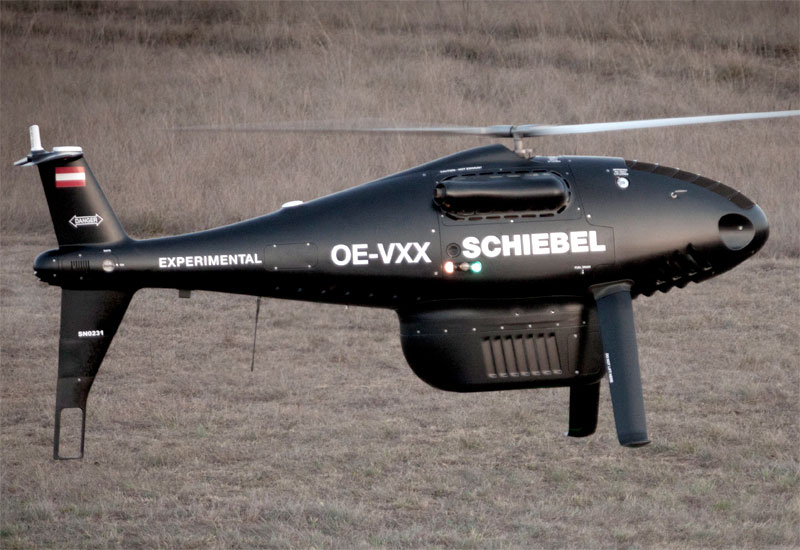 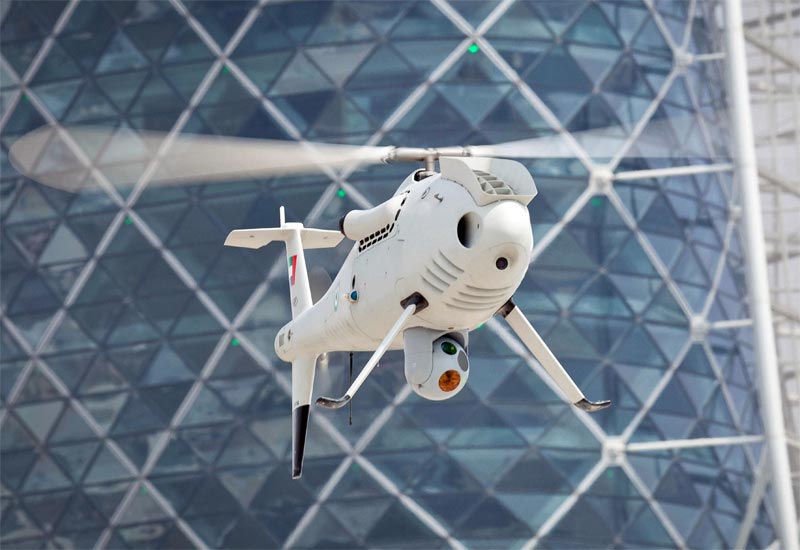 A Camcopter in flight during IDEX in Abu Dhabi; Schiebel press release; used with permission
8 / 15 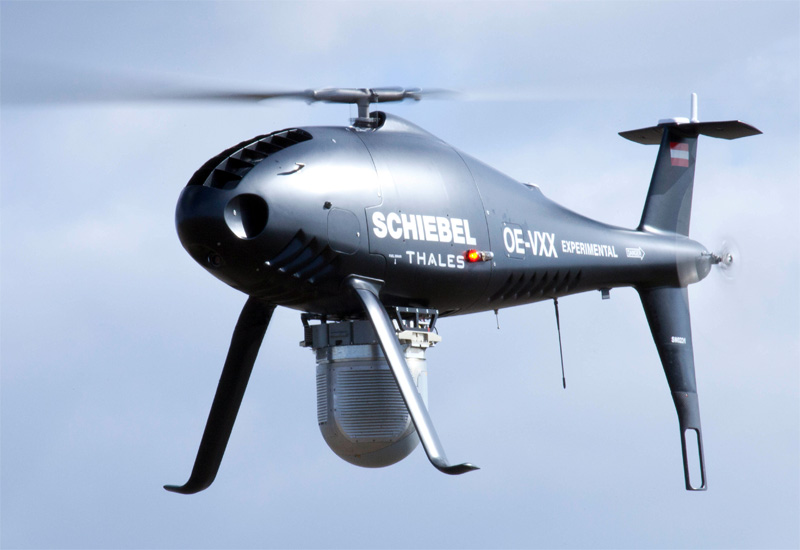 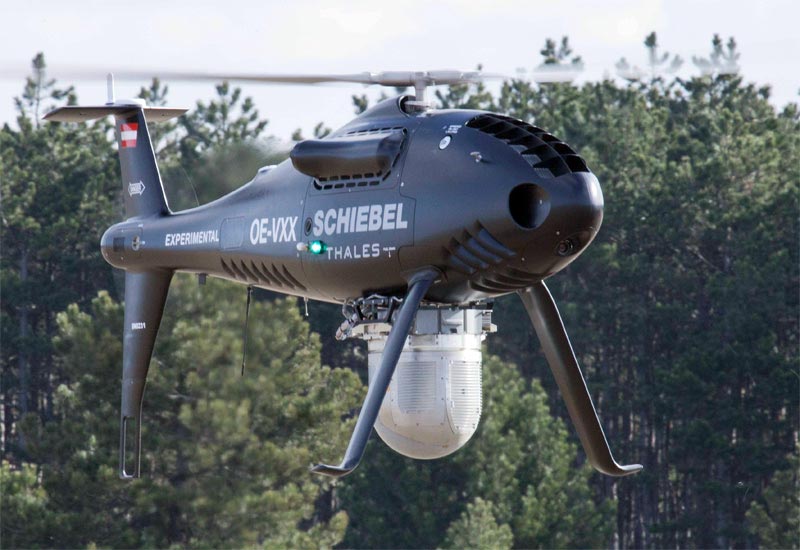 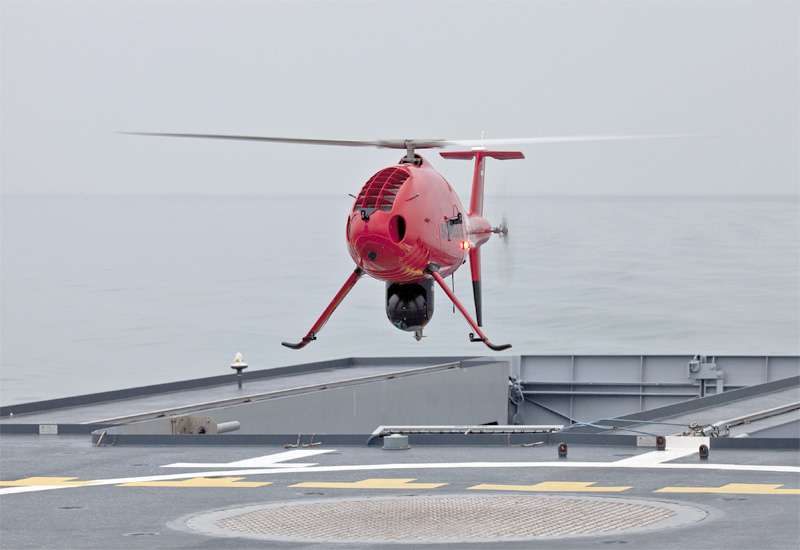 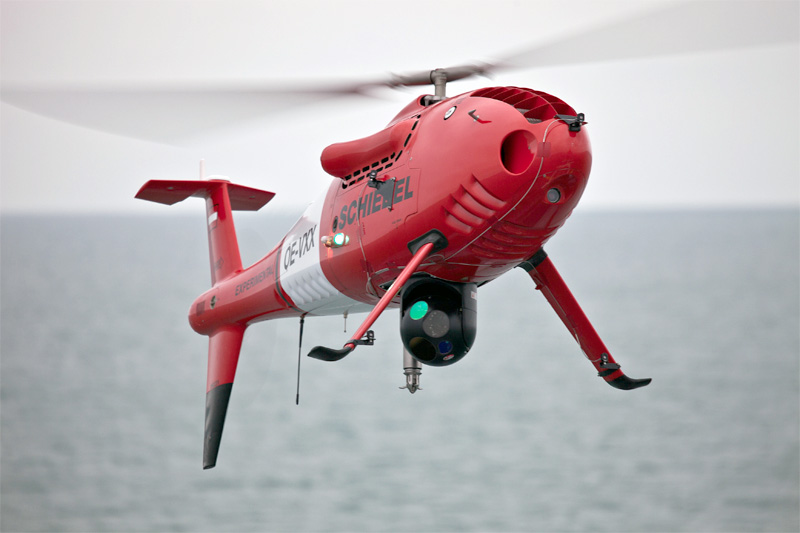 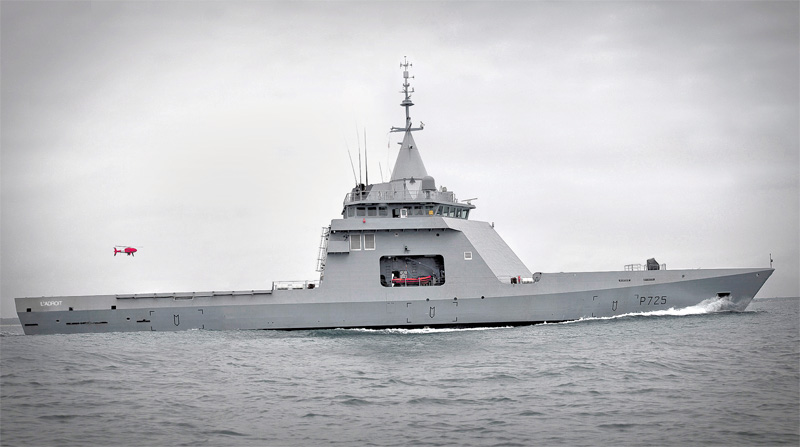 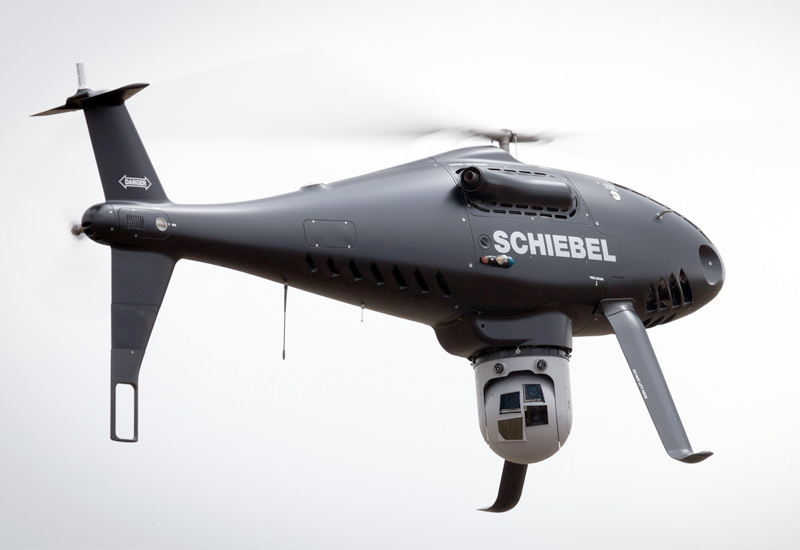 The Campcopter with FLIR Corona undergoing a test flight; used with permission.
14 / 15 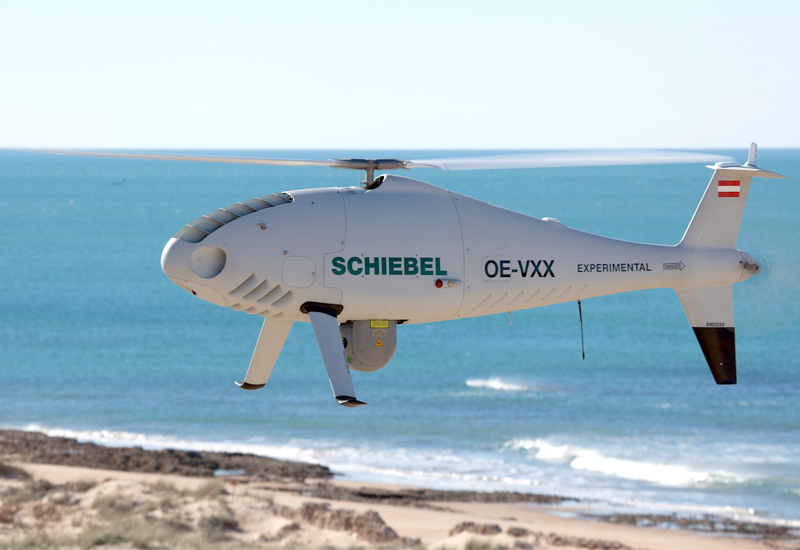 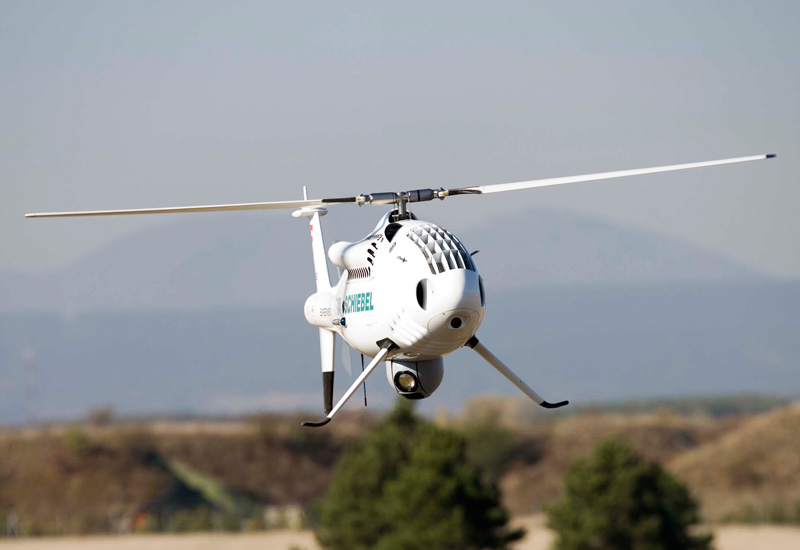 Aviation developments of similar form and function, or related to, the Schiebel Camcopter S-100...