Development of a more advanced version of the Su-27 Flanker produced the impressive Su-35 Flanker-E - now in Russian service in noticeable numbers.

Authored By: Staff Writer | Last Edited: 04/04/2022 | Content ©www.MilitaryFactory.com | The following text is exclusive to this site. 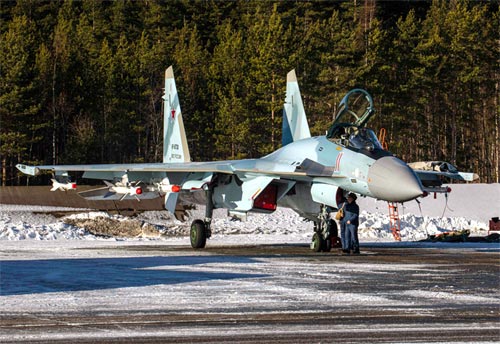 The Sukhoi Su-35 (NATO: "Flanker-E") is the latest (2013) variant of the successful Su-27 "Flanker" family of air superiority aircraft. The original Su-27 was born in a late 1970s Soviet Air Force initiative to counter the American McDonnell Douglas F-15 Eagle air superiority mount. Since then, the type's tactical value has broadened considerably in the ground attack role and the line has even spawned the navy-centric carrier-based Su-33. The Su-35 is marketed as a true 4th/4.5th Generation multi-role performer built upon the strong and proven qualities of the Su-27 line - retaining its air-to-air prowess while incorporating advanced ground attack features. The Su-35 emerged from the modified Su-27M developmental series to which the finalized "Su-35" designation came about in 1993 though the aircraft was already publicly displayed by the time of the 1992 Farnborough Air Show. Ten total prototypes of the Su-35 were then built, four being conversions from existing Su-27s while the rest being new-build aircraft beginning official Russian evaluation in 1996. The Su-35 differs from the original Su-27 in its inherent multi-role capabilities, highly modernized avionics (including the new Tikhomirov NIIP Irbis phased antenna array), long range endurance, thrust vectoring (and new) NPO Saturn 117S engines and streamlined aerodynamic qualities. First flight was recorded in June of 1998 and, after an extended period of testing, formally entered production after adoption by the Russian Air Force as the "Su-35S" in 2010.

The aircraft features an integrated in-flight refueling probe, provision for ECM (Electronic CounterMeasure) pods, upgraded and more powerful engines, larger wing surface areas and a forward and rear-facing Phazotron radar system capable of simultaneous tracking of 24 targets up to 62 miles (100km) away over uneven terrain. An additional auxiliary internal reserve fuel tank has been added as well to bring about the require operational range. The cockpit sports an updated color CRT display as well as HUD (Head-Up Display) along with digital fly-by-wire (FBW) capability with quadruple redundancy - the onboard computers able to to find four different ways to achieve the desired flight control action. Avionics include an Irbis-E passive phased array radar system. The advanced nature of the Su-35 nets it the formal classification of "4th Generation Fighter" - though its true capabilities go well beyond the original/current crop of 4th Generation mounts while falling short of the standard adopted for true 5th Generation mount (such as the American Lockheed F-22 Raptor series).

Outwardly, the Su-35 retains much of the clean sleek lines of the Su-27. It is a noticeably large aircraft with well-swept wings, a long running forward fuselage and side-by-side engine layout. The Su-35 makes use of a nose cone to house its powerful tracking radar system. Twin vertical tails, each sitting atop the engine installations, are fitted aft on the fuselage in the usual way. Cockpit visibility is excellent for a machine of this class. The engines exhaust through thrust vectoring rings at the extreme aft section of the fuselage, providing excellent maneuverability and allowing the Su-35 to complete moves off limits to other 4th Generation mounts. The Su-35 also features the Flanker-style stinger at the tail - an extended portion of fuselage housing a rear-looking radar facility.

Depending on production mark, power is provided by 2 x Saturn 1117S afterburning turbofan engines with the aforementioned thrust vector control. The engines output at 32,000lb thrust each on full thrust and roughly 19,400lb each on dry thrust alone. The thrust vectoring system allows for excellent agility when compared to the conventional Su-27 mount, the aircraft able to make tighter turns for evasion in a close-range dogfight or for out maneuvering incoming homing/guided missiles (the Russians have adopted an agile-minded approach to modern dogfighting unlike the speed/stealth-minded approach of the West). The Su-35S lists a top speed of Mach 2.25 at altitude, roughly 1,500 miles per hour and range, on internal fuel, is out to 1,900 nautical miles while Su-35S can ferry out to 2,400 nautical miles. The Su-35S will have the capability to operate at service ceilings of 60,000 feet and sport a 55,100 feet-per-minute climb rate.

As a multi-role fighter platform, the Su-35S benefits from the full array of Russian-sponsored ordnance options across no fewer than 14 weapon hardpoints, 12 underwing and under-fuselage - all external. A 30mm GSh-30 internal cannon is standard for close-in fighting (150 projectiles allocated) while the wingtips are reserved for the R-73 (AA-11 "Archer") short-range air-to-air missile. Additionally, the wingtip rails can be removed and replaced with specialized ECM pods as mission parameters dictate. The remaining hardpoints will be home to various air-to-air missiles, air-to-ground missiles, anti-radiation missiles, anti-ship missiles, laser-guided bombs, guided rocket pods, unguided rocket pods, and precision weapons as needed.
Advertisements

Two Su-27M aircraft were utilized in an improvement program becoming the Su-37 "Flanker-F". Similar to the Su-35 model, these systems featured the thrust vectoring nozzles for evaluating increased agility. Only the two examples were ever produced before the experimental program was shelved - the test aircraft being converted into full Su-35 variants. The two-seat trainer variant of the Su-35 will be the Su-35UB while retaining some of the inherent combat capabilities of the single-seat brethren. The Su-35BM represents an upgraded design from the original Su-35 offering while the Su-35S is the product of this endeavor.

In September of 2012, it was announced that the Russian Air Force was proceeding with its plans to procure the Su-35S in number after successful testing of the aircraft began wrapping up. Deliveries of the first production-quality batch Su-35S was expected in October of 2012 and, in all, will number some 48 aircraft. The Russian Air Force expects to procure a total of 90 Su-35S aircraft to field as its primary multirole fighter for the short term.

The Indian-exported Su-30MKI variant is thought to utilize some of the reported Su-35 systems and ability mentioned above. Early-form Su-27Ms were known to have been used by the Russian Knights aerial acrobatic team.

While Russia remains the sole operator of the Su-35, it is no secret that the Sukhoi concern intends to convince foreign operators to purchase their product and directly competes with current and possible F-16/F-18/F-35/Gripen/Eurofighter/Rafale customers. To date, several nations have been mentioned as possible suitors for the F-35 though no formal deal has been inked. A proposed deal for 12 examples with Libya became nothing after the country fell into civil war in 2011. Potential operators remain China and Brazil - the former still lacking the capabilities to design, develop and produce their own serviceable turbofan engine in-house and the latter currently evaluating their next generation fighter needs.

In its 2013 Paris Air Show unveiling (the first outside of Russia), the Su-35 proved a Day One hit when going through its performance paces above the crowd - officially displaying the capabilities of the Su-35 to potential customers. The Su-35 is viewed as an excellent lost-cost, low-risk alternative to the pricier in-development Lockheed F-35 and can outpace all other existing 4th Generation designs. For budget conscious shoppers and those nations rethinking their procurement of the bloated and delayed F-35 product, the Su-35 is appearing a better option with each passing month. Its only true rival at the moment remains the American F-22.

April 2014 - It was reported that the first batch of some twelve Su-35 fighters were handed over to the Russian Airforce with the remainder of a 24-strong order to be completed throughout the year. Fourteen more will arrive throughout 2015. The 23rd Fighter Air Regiment was the recipient and currently flies the related Su-27SM at Komsomolsk-on-Amur. The aircraft underwent extensive weapons testing throughout 2013, clearing over a dozen different types in the process.

As a result of the downing of an Su-24 strike fighter over Syria by a Turkish fighter, Russia has deployed several Su-35 air superiority platforms to the region as part of the ongoing Syrian Civil War (2011 - Present) against opposition forces.

January 2017 - China has taken delivery of four Su-35 fighters in what is hoped to be the last purchase of a foreign fighter product.

February 2018 - The Indonesian Air Force has contracted for eleven Su-35 Flanker heavy fighters to add to its stable of combat aircraft.

March 2019 - Egypt has announced a deal to purchase twenty Sukhoi Su-35 Flanker multi-role fighters from Russian industry for its Air Force. The deal is worth around $2 billion USD.

April 2022 - The first Russian Air Force Su-35S Flanker-E fighter has been confirmed shot down by the Ukrainians in the ongoing Russian invasion of Ukraine.

(Showcased performance specifications pertain to the Sukhoi Su-35S production variant. Compare this aircraft entry against any other in our database or View aircraft by powerplant type)
STANDARD:
1 x 30mm GSh-30 internal automatic cannon.

Mission-specific weaponry across 12 underwing and underfuselage hardpoints to include any of the following (wingtip launchers reserved for R-73 missiles or ECM pods):

(Not all ordnance types may be represented in the showcase above)
Hardpoint Mountings: 14 (including wingtips)
Mounting Points

General Assessment
Firepower
Performance
Survivability
Versatility
Impact
Values are derrived from a variety of categories related to the design, overall function, and historical influence of this aircraft in aviation history.
Overall Rating
The overall rating takes into account over 60 individual factors related to this aircraft entry.
100
Rating is out of a possible 100 points.
Firepower Index (BETA) 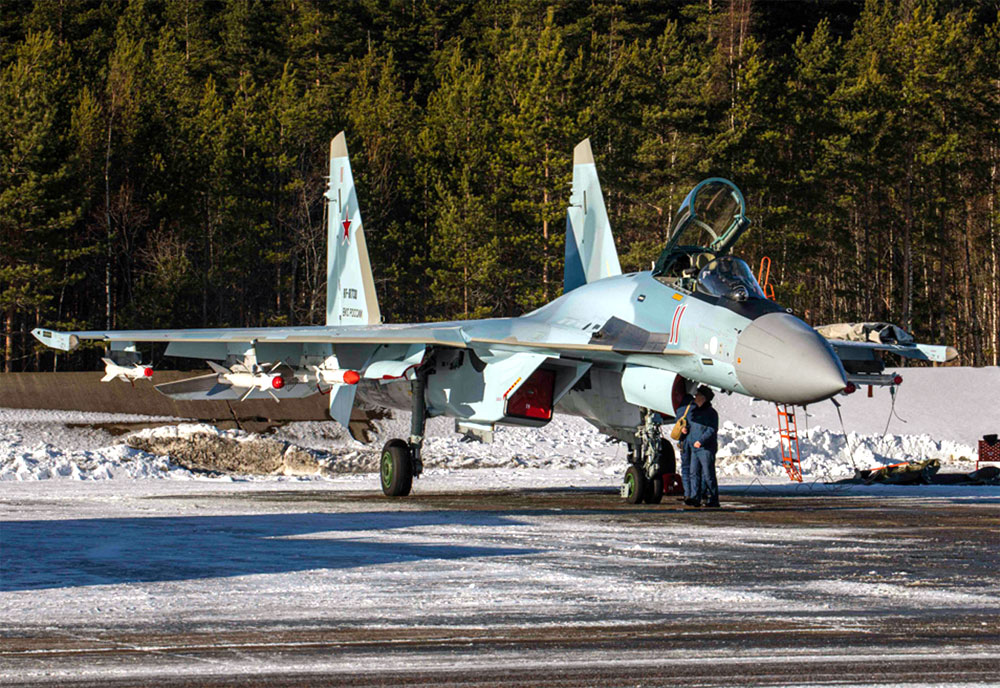 Image from the Russian Ministry of Defense; Public Release.
2 / 15 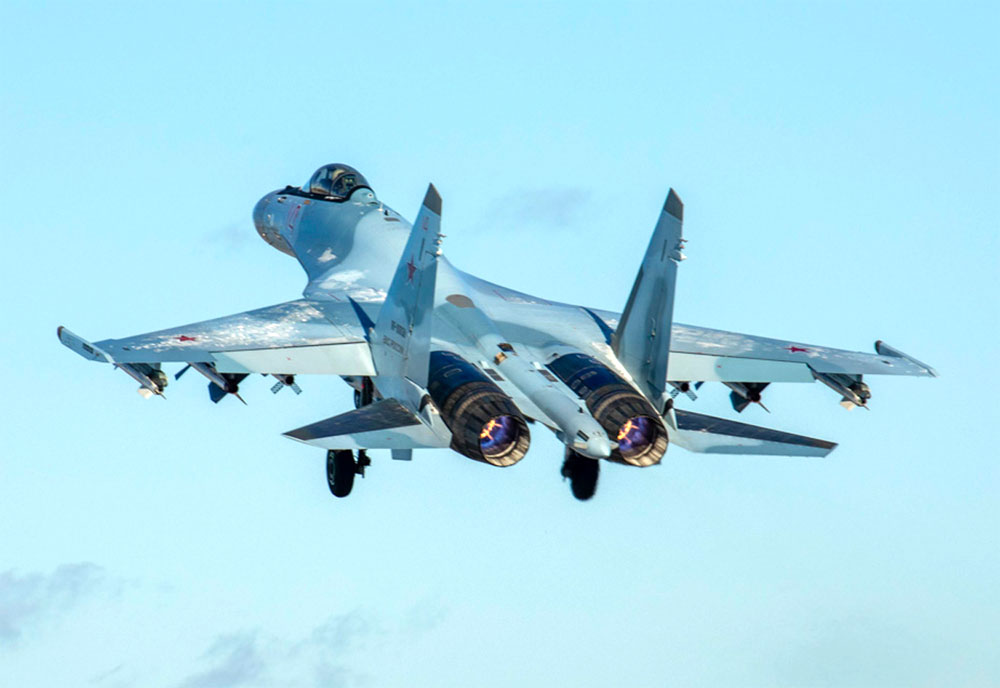 Image from the Russian Ministry of Defense; Public Release.
3 / 15 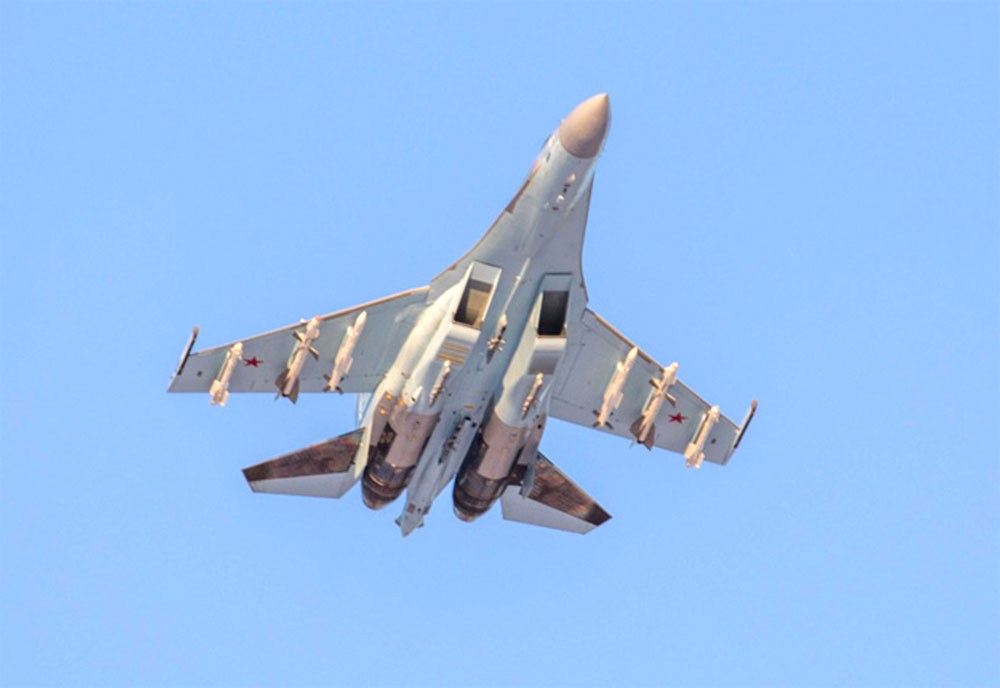 Image from the Russian Ministry of Defense; Public Release.
4 / 15 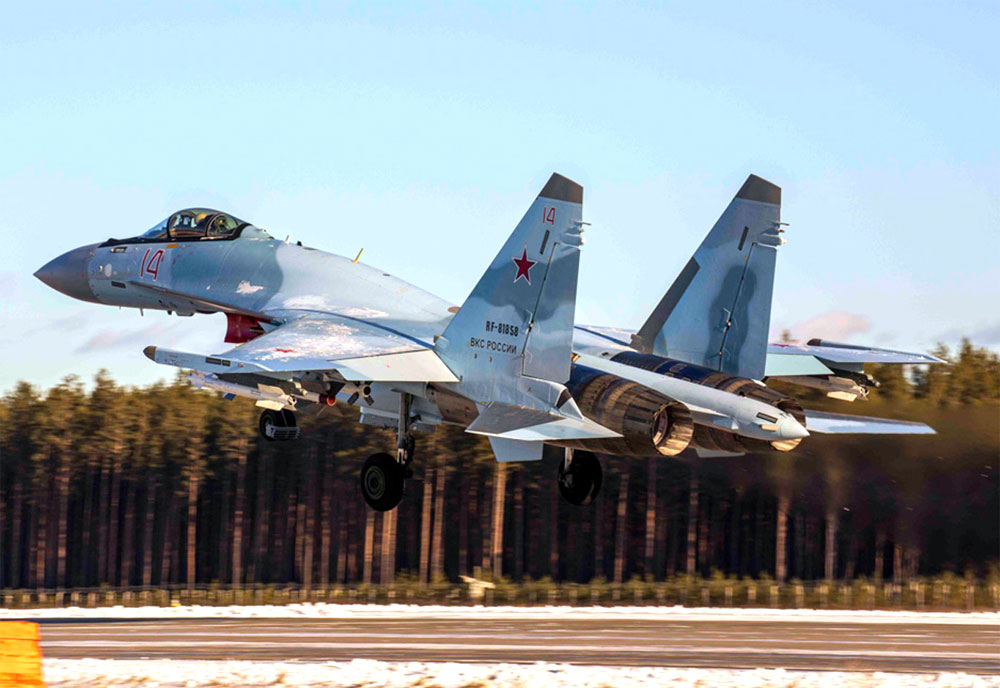 Image from the Russian Ministry of Defense; Public Release.
5 / 15 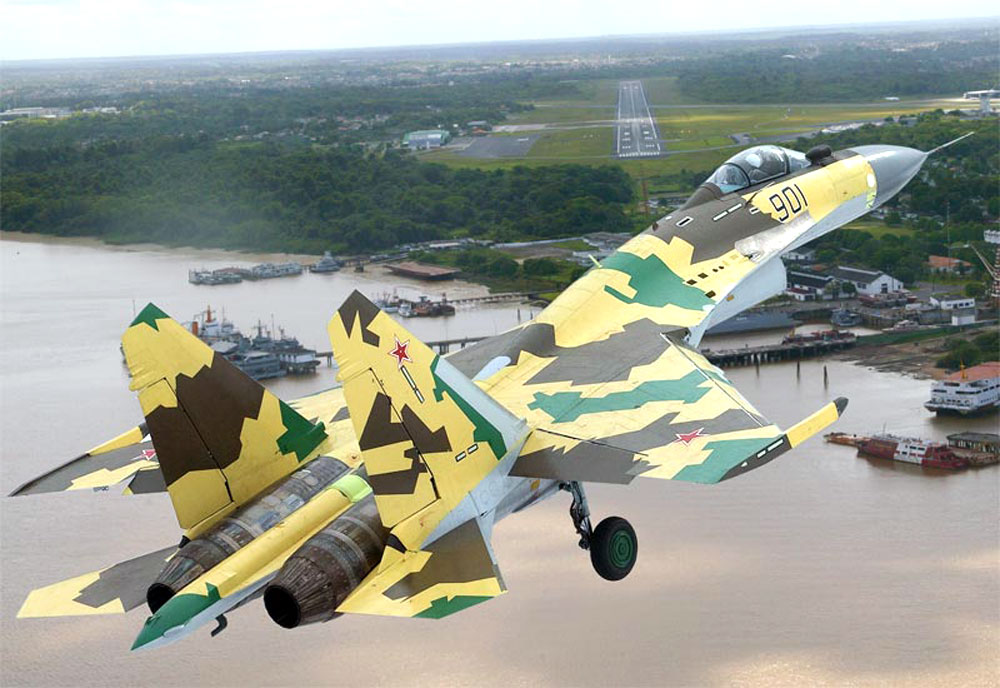 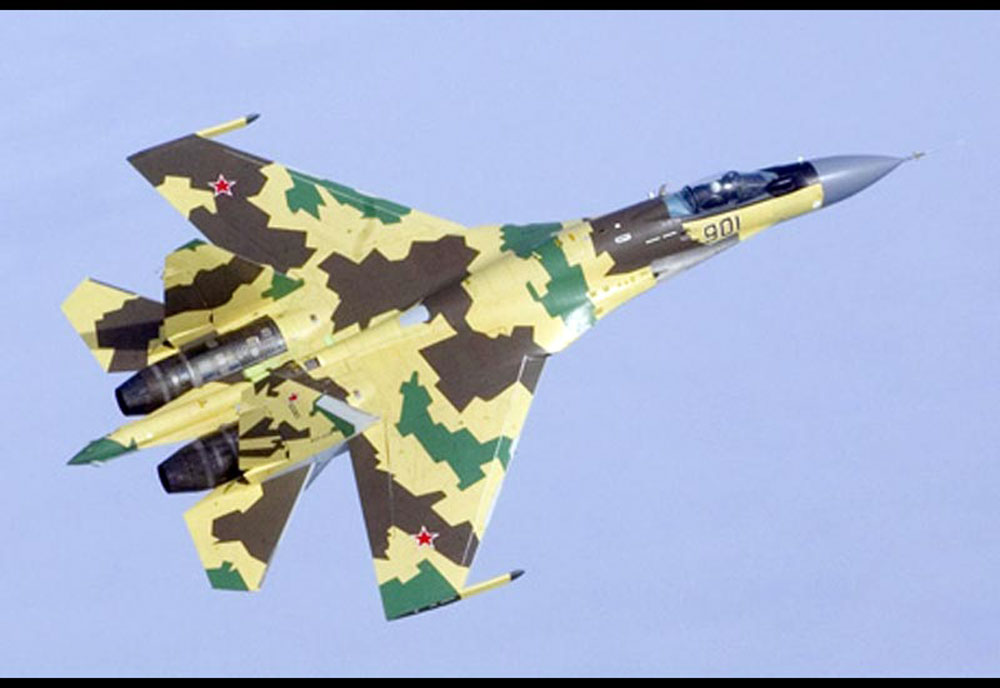 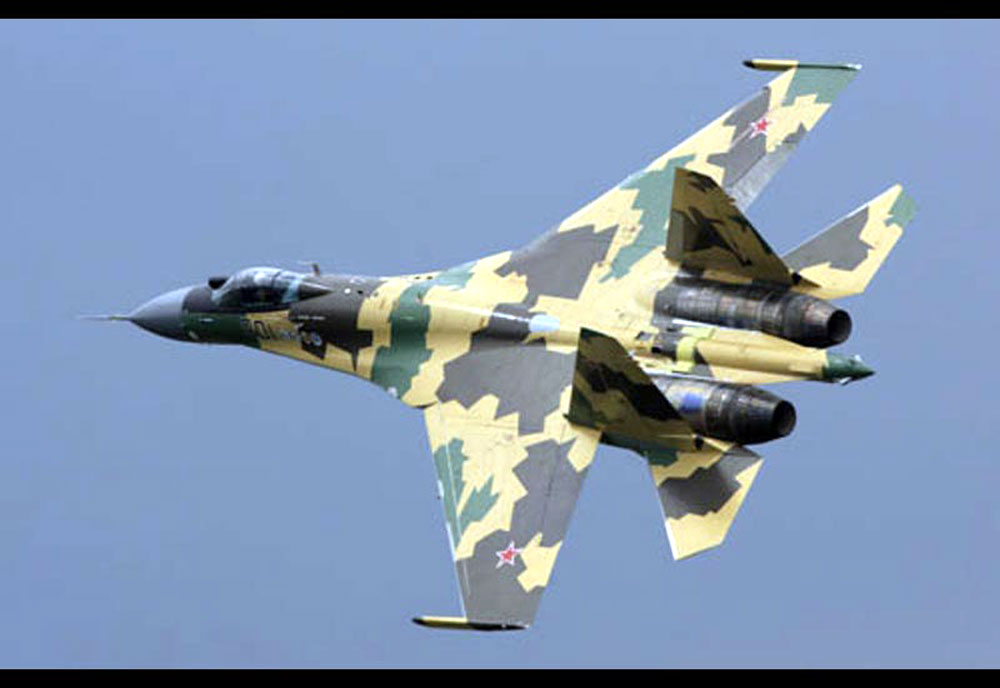 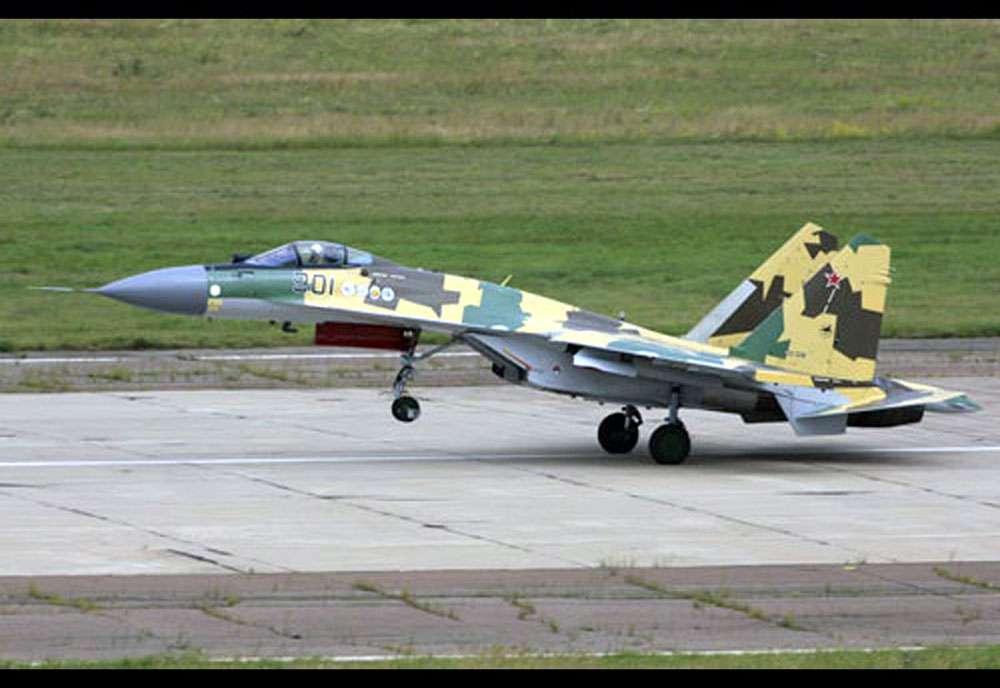 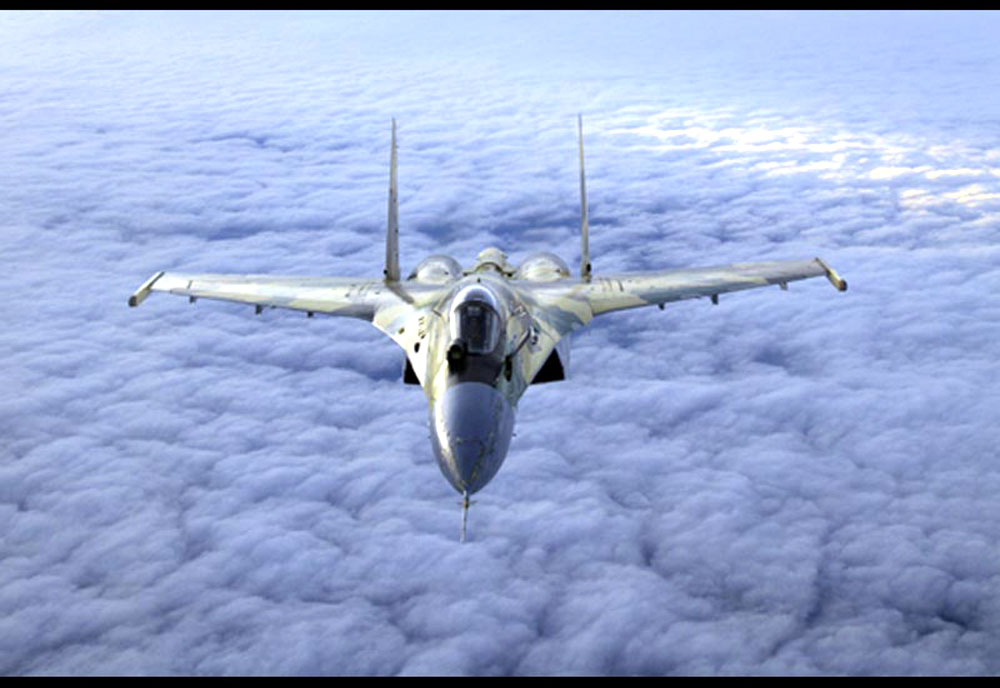 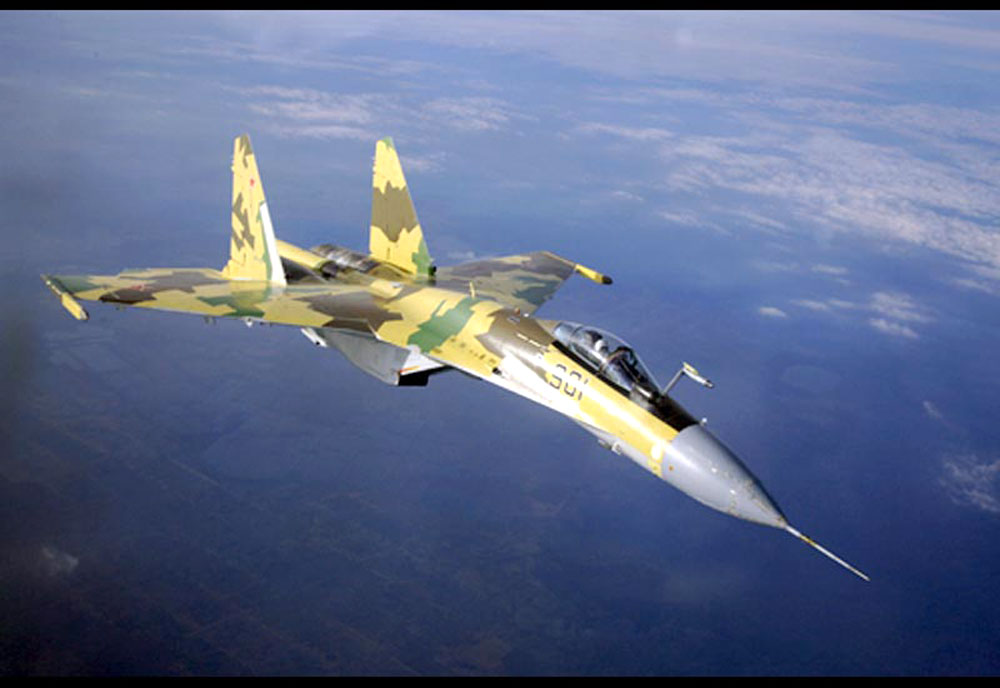 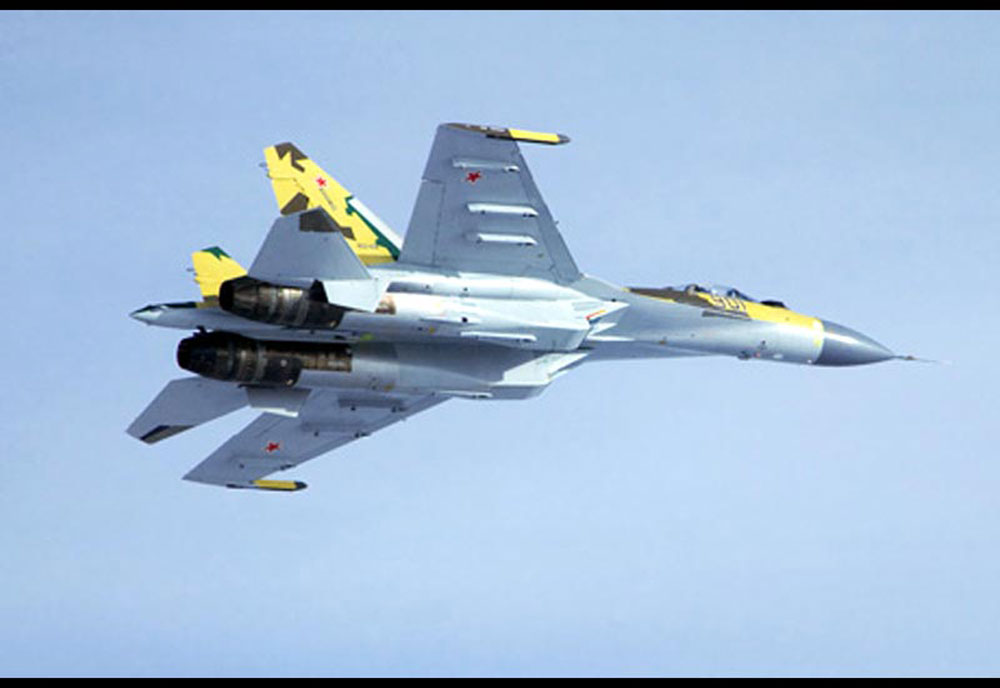 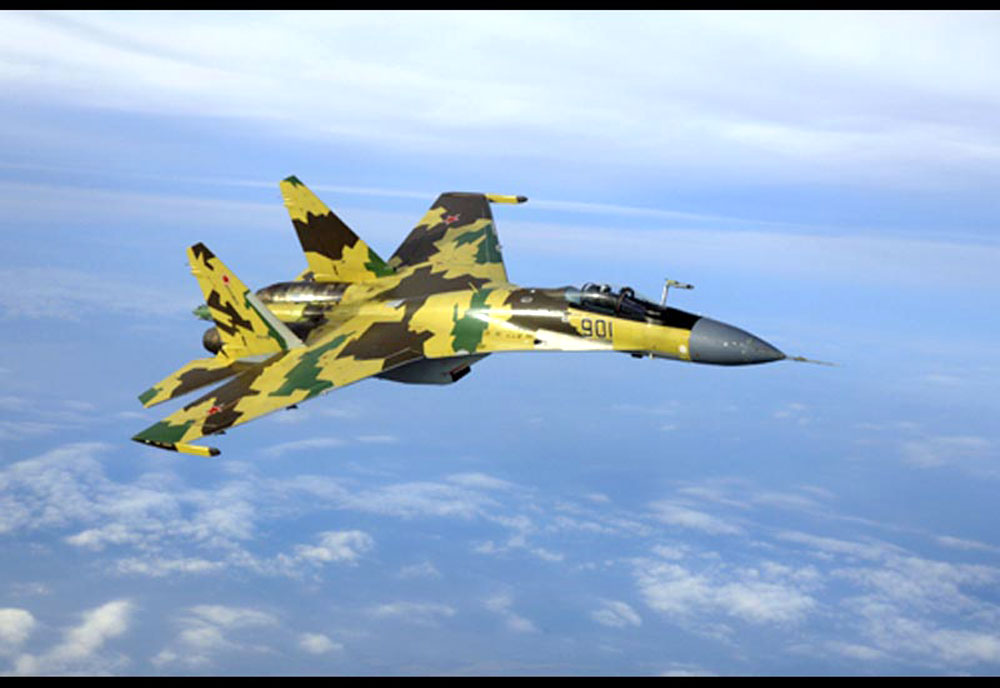 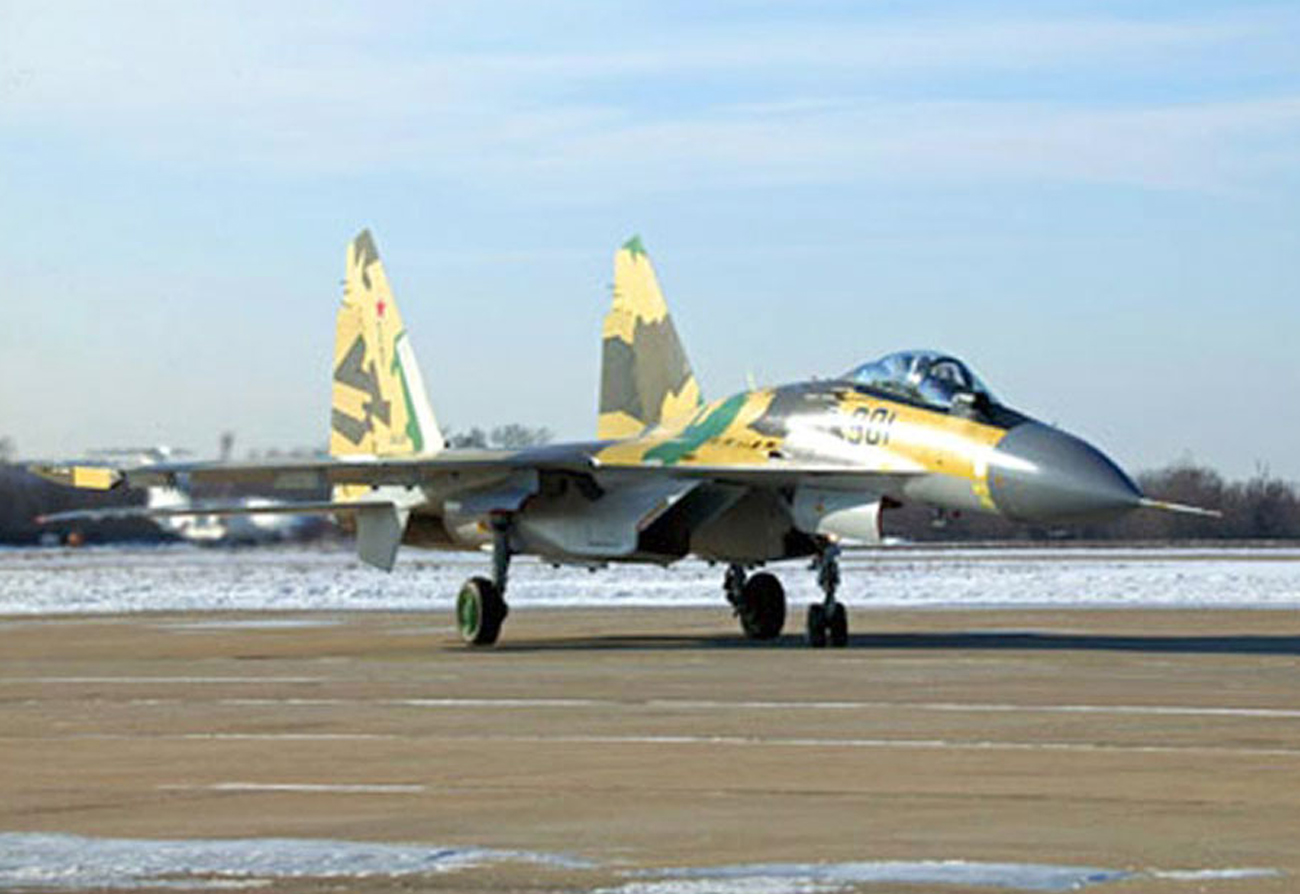 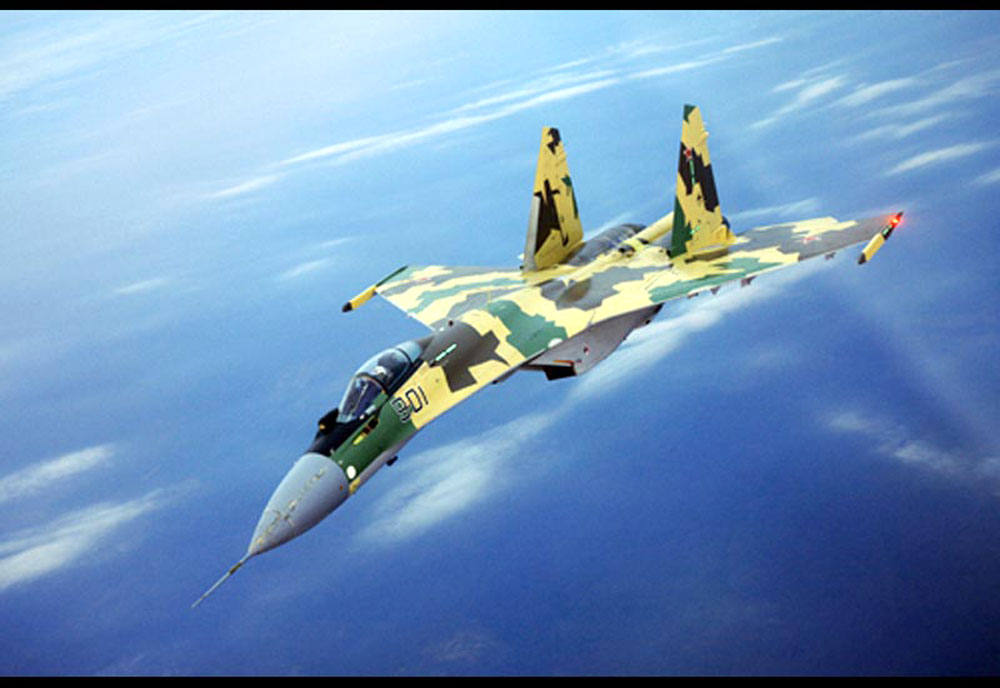 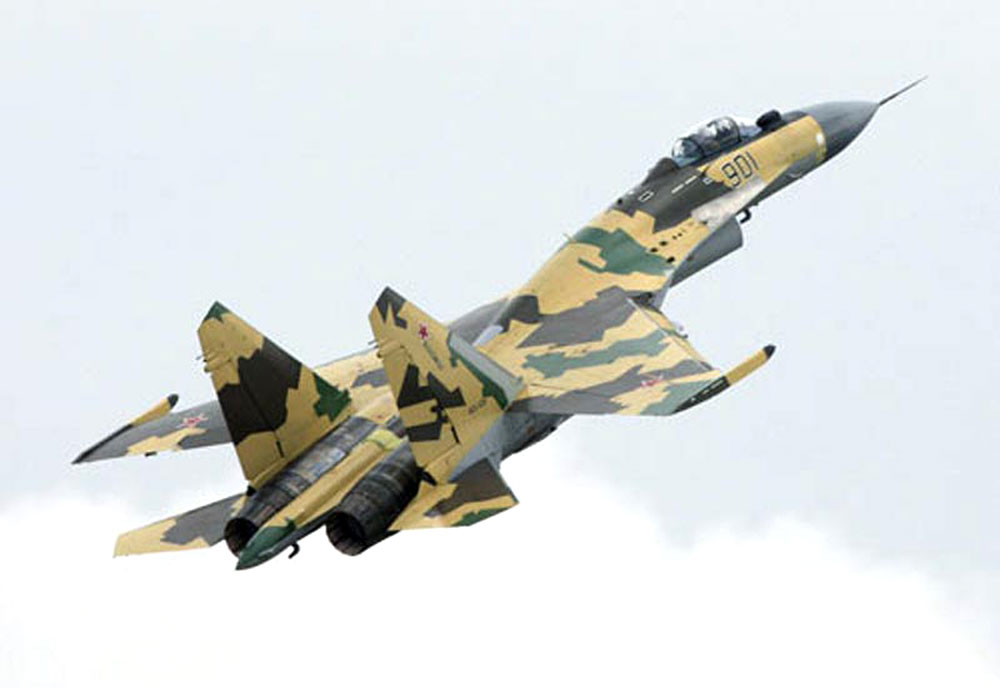 Aviation developments of similar form and function, or related to, the Sukhoi Su-35 (Flanker-E / Super Flanker)...