The indigenous jet-powered Saab J32 Lansen fighter served a multitude of roles for the Swedish Air Force during - and after - the Cold War. 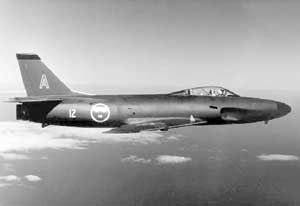 By the late 1940s, the Swedish Air Force (or "Flygvapnet") was reviewing options in an effort to replace its aging series of attack platforms - these both foreign purchases and indigenous aircraft designs. Consistent with Swedish military thinking - in which the entire country became a battlefield in the event of all-out war - the new aircraft should be able to reach all parts of Sweden, be they inland or at the ocean, at any time of day and in any weather condition. The Soviet Empire proved the largest threat to Sweden in the region and, as such, the aircraft would act as both a deterrent to invasion by the Red Army and as a lethal tool in the event of. Speed would, of course, play an important part of the design as would armament - this capable of tangling with land-based and aerial targets alike through use of cannon, rockets and missiles as needed. One of the primary missile armaments for the aircraft would eventually be the equally-new Rb 04 anti-ship missile then in development but would go on to include a license-production copy of the American AIM-8 Sidewinder ("Rb 24" in the Swedish inventory).

In 1948, Saab delivered their two-seat, jet-powered P1150 prototype with swept wings in a smooth contoured airframe tied to a British Rolls-Royce Avon 100 series afterburning turbojet engine (the latter also license-built in Sweden by Svenska Flygmotor as the RM). Interestingly, the aircraft also featured one of the first pairs of wings designed with the help of computers to test initial concepts. First flight of the prototype was recorded on November 3rd, 1952. After a relatively short period of evaluation and testing of several more constructed prototypes, the P1150 was officially accepted into the ranks of the Flygvapnet as the Saab J32 "Lansen" (or "Lance"). Production began in 1953 and one example broke the sound barrier as soon as October 25th of that year, this, however, in a shallow dive. The initial production version - the A 32A "attack" model - was formally introduced to the Flygvapnet in 1955. Once in operation, Flygvapnet pilots and crew were quick to note the type's pleasing flight qualities. The Lansen series was in active service - in one form or another - up until 1997 - all with the Swedish Air Force.

The Lansen shared some outward design similarities to several contemporary aircraft including the North American F-86 Sabre (arrangement), the Lockheed F-80 Shooting Star (intakes, profile) and the Supermarine Swift (arrangement) - all jet-powered fighters running on one turbojet engine and all, with the exception of the Shooting Star, introduced during this period. The armament loadout was fairly typical for any fighter aircraft of the time, this to include just two air-to-air missiles and its integrated cannon battery. The crew of two, however, was a benefit to the Lansen over that of her contemporaries, providing for an extra pair of "eyes-in-the-skies" as well as another "body" for which to share the burden of the workload on long patrols. The airframe itself eventually proved so versatile during her long tenure that it was utilized for a myriad of airborne battlefield tasks beyond that of ground attack, these including dedicated fighter, reconnaissance platform, electronic warfare platform, maritime patrol / anti-ship and target tug.

Design of the Lansen was highly conventional with a tubular and oblong fuselage tapered at the ends. The nose was conical in shape and housed the radar (when fitted as such) and cannon armament. The aircraft was crewed by a team of two seated in tandem under a single-piece canopy with the pilot occupying the forward seat. Despite fitted with a single powerplant, the engine was aspirated by a pair of semi-circle air intakes located on either side of the forward fuselage. The intakes were expertly contoured to the fine shapes inherent in the Lansen as a whole and the engine exhausted through a ring at the absolute rear of the design. Wings were low-set on the fuselage at amidships and well-swept along both their leading and trailing edges (moreso on the leading edge). The wings were home to various underwing hardpoints as well as the compartments for landing gear. The undercarriage was of a typical tricycle arrangement with the single-wheeled main landing gear legs retracting towards centerline at the wing roots and the single-wheeled nose landing gear leg retracting forwards under and forward of the cockpit floor. When at rest, with all her landing gears extended, the Lansen maintained a noticeably low profile by any regard. The empennage was conventional and made up of a single vertical tail fin (clipped at its top edge) featuring a swept leading edge and a pair of mid-set horizontal planes at the base of the fin, these also featuring sweep. Though unspectacular in overall design, the Lansen was nonetheless a functional airframe and continued the great Swedish traditional of producing a well-thought out product whose style was just as important as its function.

The base J 32B fighter model was powered by a single Svenska Flygmotor RM6A turbojet producing approximately 10,560lbs of dry thrust and upwards of 14,685lbs of thrust with afterburner (afterburner was nothing more than raw fuel pumped into the engine to produce short periods of extra power and, thusly, performance in the way of maximum speed). Empty weight was listed at 16,535lbs while the maximum take-off weight was rated around 29,760lbs. Maximum speed was reportedly 745 miles per hour - putting her on par with other jet fighters of her time - with a range of around 1,250 miles. Her service ceiling was in the range of 49,200 feet requiring the use of a pressurized cabin and integrated oxygen supply for the crew and the Lansen sported an impressive rate-of-climb equal to 19,685 feet per minute. She maintained a length of exactly 49 feet with a wingspan nearing 42 feet, 8 inches. Her height, when at rest, was listed at 15 feet, 3 inches - by no means a small fighter.
Advertisements

The Lansen existed in a handful of variants after the P1150 prototype. This included the A 32A ground attack and maritime strike variant of which some 287 examples were produced between 1955 and 1957. These airframes were aptly-armed with a quadruple battery of 20mm Bofors cannons in the nose and this armament could be further augmented by her inherent provisions for air-to-air and air-to-surface missiles or rocket pods, the latter fitting 75mm unguided multi-purpose rockets. The A 32A model was officially retired from Swedish service in 1978.

The J32B originally began as a dedicated bad weather/night-fighter but was eventually categorized as an "all-weather" mount consistent with like-fighters of her time. Between 1958 and 1960, some 118 examples followed the initial pair of prototypes. Unlike the A 32A series, the J32B was formidably armed with 4 x 30mm ADEN cannons and held provisions for infrared- or radar-guided missiles in the form of the Rb 24 ( the license-produced American AIM-9 Sidewinder short-ranged air-to-air missile). The missiles could also give way to the carrying of rocket pods as in the A 32A "attack" model. Beyond its improved armament capabilities, the J 32B was also set with a more powerful RM 6A series engine, this essentially a licensed copy of the British Rolls-Royce Avon Mk 47A series. The J 32B would serve Swedish forces up until 1973.

The S 32C was a special development of the Lansen intended for photographic reconnaissance sorties. The S 32C was based on the existing A 32A airframe though outfitted with a pair of SKa 17 and a pair of SKa 18 series cameras with an extended-range version of the PS-432/A radar system. Some 45 aircraft of this type were ultimately delivered.

As with most other airframes having reached their maturity, the Lansen was modified to operated in the inglorious role of target tug under the designation of J 32D. These pilotless aircraft help to serve new generations of Swedish pilots in the art of aerial gunnery and missile tracking/engagement. Amazingly, the J 32D lasted in Swedish service up until 1997 - becoming one of the final uses of the Lansen series.

Also retired in 1997 was the J 32E, a dedicated electronic warfare / electronic countermeasures variant modified from existing J 32B models. These airframes were fitted with a variety of specialized equipment for the role including an onboard jamming system for tackling both land- and sea-based radar beams. Some fourteen J 32B models were converted for the role.

A pair of proposed Lansen designs were also developed in the mid-1950s, neither of these, however, were ever contracted for production by Swedish authorities. This included the J 32AD day fighter and the J 32U improved fighter. The J 32AD was drawn up in 1953 as a possible "bridge" solution between the outgoing Saab J29 Tunnan fighter and the upcoming Saab J35 Draken fighter for the Swedish Air Force. The J 32AD would have retained a powerful armament loadout of 4 x 20mm cannons but also included a single 30mm ADEN cannon into the mix. Missiles, of course, would also have been part of the forte concerning the J 32AD. The airframe was furthered lightened over that of the original for improved performance specs. However, the Swedish government instead elected to purchase 120 examples of the excellent - and proven - British Hawker Hunter fighter for the time being.

The J32U was designed in 1954 to incorporate still better performance specifications and capabilities. As such, the airframe sported a revised wing design coupled to a more powerful Rolls-Royce RA 19R series turbojet engine. Like the J 32AD, the J 32U was not selected for production.

It was reported that, as recently as May of 2010, one of two remaining operational Lansens was used to take airborne ash samples in response to the volcanic eruption in Iceland that led to the grounding of thousands of commercial flights across Europe. These two aircraft, generally held in reserve, currently work in a similar role with the Swedish Radiation Safety Authority to monitor high-altitude radiation levels.
Advertisements

(Showcased performance specifications pertain to the Saab J32B Lansen (Lance) production variant. Compare this aircraft entry against any other in our database or View aircraft by powerplant type)
STANDARD:
4 x 20mm Bofors cannons in nose OR 4 x 30mm ADEN cannons in nose. 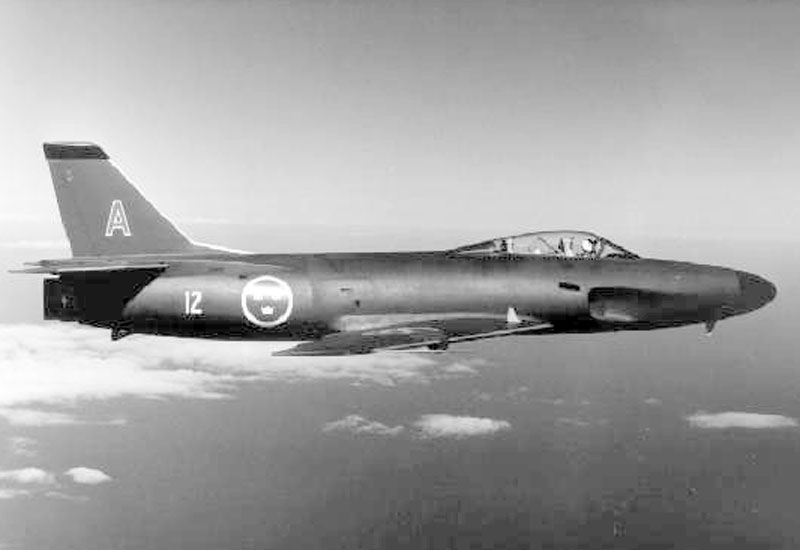 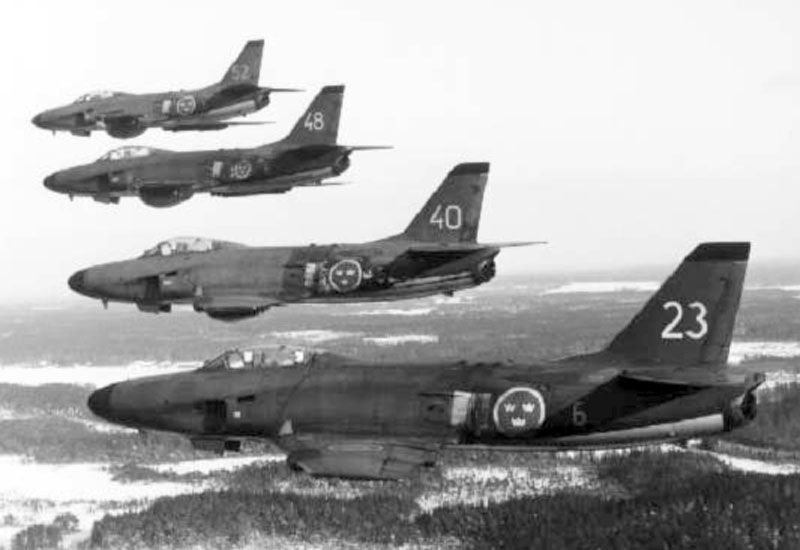 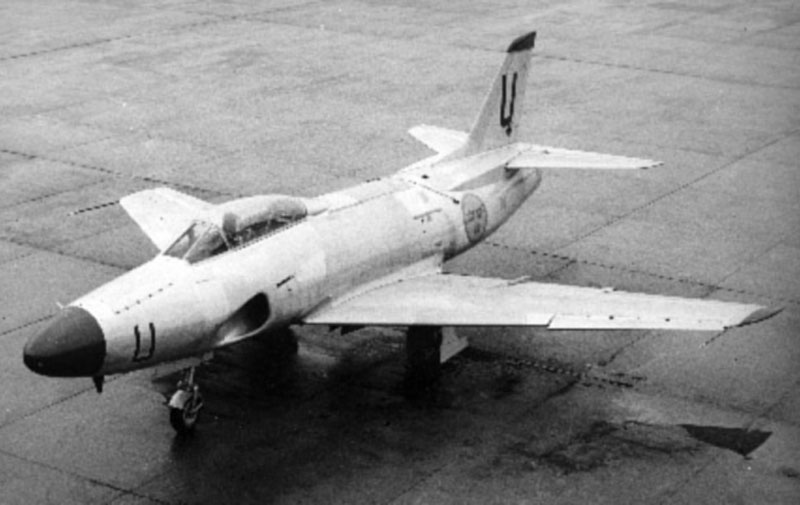 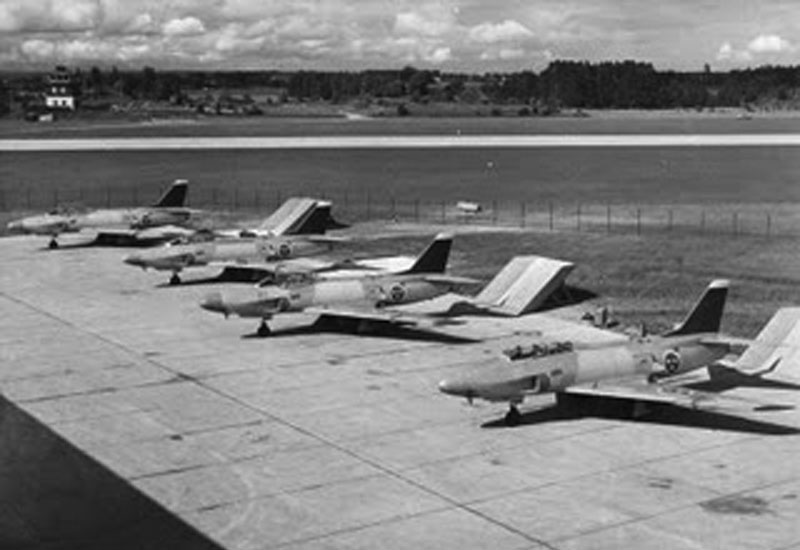 A group of Saab 32 Lansen fighters at rest
❮ ❯