The now-abandoned F-15SE Silent Eagle initiative was marketed by Boeing as a potential 5th Generation upgrade plan to its aging line of F-15 Eagle platforms.

Authored By: Dan Alex | Last Edited: 05/19/2020 | Content ©www.MilitaryFactory.com | The following text is exclusive to this site. 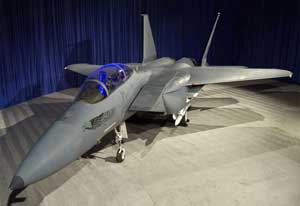 The Boeing F-15SE "Silent Eagle" is a "stealthified" version of the successful two-seat F-15E "Strike Eagle" debuted in 1988. The Strike Eagle was a dedicated all-weather, multi-role, ground-attack platform based on the original F-15 Eagle air superiority fighter though still retaining the air-to-air capabilities and performance of the original. Since its 1976 inception, the original F-15 Eagle has remained a preeminent air superiority fighter the world over. When utilized in operational combat, the aircraft has not failed in generating one of the best kill-to-loss ratios of the modern era. The Silent Eagle program began in March of 2009 to fill a market need for a relatively low cost fighter platform to compete with expensive 5th Generation offerings coming online. As such, many of the target customers have since become existing F-15 Eagle operators such as Israel, Japan, Saudi Arabia and South Korea. First flight for the F-15SE took place on July 8th, 2010 using a converted F-15E airframe with a Conformal Weapons Bay (CWB) compartment installed for flight testing. An AIM-120 AMRAAM medium-range air-to-air missile has since been test-fired from the internal weapons bay, this occurring on July 20th, 2010.

A few key features will make the F-15SE model notable over her predecessor. Radar absorbing materials are planned for use across the airframe on key surfaces to help retard or defeat incoming radar signals. Of course these stealth features will be within the limitations of US export restrictions for military technology but is thought to provide protection levels similar to that being offered in 5th Generation mounts. However, base protection will only be centered on generating a lower frontal aspect signature and restricted to air-to-air sortie frequency bands. As such, "all-aspect" and air-to-surface sortie frequency protection will still be of the conventional type, requiring use of electronic countermeasures assistance when dealing with threats. The aforementioned Conformal Weapons Bay will now take the place of the Conformal Fuel Tanks (CFT) in the fuselage. This will allow the F-15SE to field some of her ordnance internally in an effort to reduce the airframe's radar cross-section. Four internal weapons bays are intended in the finalized production models while the original external weapons pylons and hardpoints of the Strike Eagle will be retained as will the internal 20mm M61 Vulcan Gatling cannon. The centerline and two underwing hardpoints will remained plumbed for the use of external fuel drop tanks. Structurally, the F-15SE will do away with the straight-angled vertical tail fins and instead exhibit tail fins with an outward angle (facing away from centerline at 15 degrees) in another attempt to further reduce the airframe's cross-section. Avionics will include the APG-82 Active Electronically Scanned Array (AESA) radar system, a Digital Fly-by-Wire Flight Control System (DFCS), a Link-16 fighter data link, the BAe Systems Digital Electronic Warfare System (DEWS) and the Lockheed Martin "Sniper" Infrared Search and Track (IRST) electro-optical targeting system.

With all due respect, the F-15 Eagle remains a highly viable and powerful fighter platform against all modern types fitting the same general categorization but it remains to be seen how the platform - particularly the F-15SE - can tangle with the latest 5th Generation systems like the Lockheed F-35 Lightning II. The F-15SE might very well be the curtain call for the series of this fine aircraft - one of the most successful fighter designs of all time.

As of this writing, Boeing currently awaits the status on a request to the American government for the export license required to begin construction and delivery of F-15SE examples to interested foreign parties. Israel has shown particularly keen interest in the new development and South Korea is mulling its options before it commits to upgrading its frontline fighter stable.©MilitaryFactory.com
Note: The above text is EXCLUSIVE to the site www.MilitaryFactory.com. It is the product of many hours of research and work made possible with the help of contributors, veterans, insiders, and topic specialists. If you happen upon this text anywhere else on the internet or in print, please let us know at MilitaryFactory AT gmail DOT com so that we may take appropriate action against the offender / offending site and continue to protect this original work.

In August of 2013, it was announced that the F-15SE was selected as the winner of South Korea's F-X Phase 3 fighter program. The deal may net Boeing a production batch of some 60 aircraft. It is reported that the South Korean Air Force is still lobbying for the more expensive, technology heavy Lockheed F-35 Lightning II 5th Generation Fighter.

In December of 2013, it was said that the Lockheed Martin F-35 Lightning II had been selected as the primary winner of the F-X Phase 3 fighter program. With an available inventory budget of 60 aircraft, 40 of these will be represented by the F-35. Boeing is still pushing to have its F-15SE represent the remaining 20 spots - though this appears a long-shot initiative.

October 2015 - It appears that the F-15SE proposal is now officially dead. The targeted customers - Israel, South Korea and the United States Air Force - had not shown any viable interest in the vast overhaul of their F-15 fleets. It appears that Boeing will offer a less complex upgrade to existing F-15C models that increase missile-carrying capability and utilize some of the stealth features planned for the Silent Eagle.

Boeing IDS - USA
(View other Aviaton-Related Manufacturers)
None.
(OPERATORS list includes past, present, and future operators when applicable)
✓ Air-to-Air Combat, Fighter
General ability to actively engage other aircraft of similar form and function, typically through guns, missiles, and/or aerial rockets. ✓ Interception
Ability to intercept inbound aerial threats by way of high-performance, typically speed and rate-of-climb. ✓ Ground Attack (Bombing, Strafing)
Ability to conduct aerial bombing of ground targets by way of (but not limited to) guns, bombs, missiles, rockets, and the like.

(Showcased performance specifications pertain to the base Boeing F-15SE (Silent Eagle) production variant. Performance specifications showcased above are subject to environmental factors as well as aircraft configuration. Estimates are made when Real Data not available. Compare this aircraft entry against any other in our database or View aircraft by powerplant type)
STANDARD:
1 x 20mm M61 Vulcan Gatling cannon (starboard wing root, internal).

(Not all ordnance types may be represented in the showcase above)
Hardpoint Mountings: 15 (including internal) 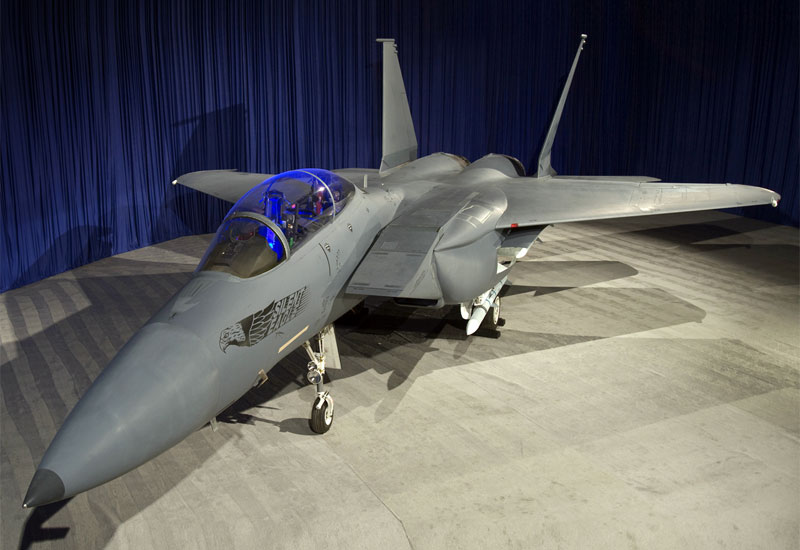