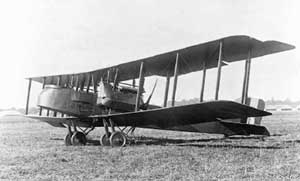 With the Germans having gained critical territory up to the Belgian coast in 1914, thoughts to the bombing of targets within the British mainland became more of a reality. The first Zeppelins attacked the capital city of London with relative impunity and stunned its population in June of 1915. This was then followed by a more successful outing in September, prompting the English to relocate critical frontline squadrons for the purpose of home defense. While use of Zeppelins as bombers lessened, LVG light bombers were then used to attack the city in November of 1915 - proving the English capital within strategic reach of the then-available German light bombers. However, a true long-range, heavy-class solution was still to come - and finally made available - by the arrival of the Gotha bomber series, the classic German heavy bomber of World War 1.

The Gotha aircraft was a two-engined, biplane design forged of a steel skeleton, wood framing and fabric skin. They proved a formidable foe for they were able to operate in both day and night, possess a potent ordnance load and defend one another against enemy fighters with relatively good success when flying in tactical formation and guns at the ready. Anti-aircraft artillery proved their greatest threat for these large bombers were still slow-moving targets to ground-based artillery, particularly during the day and in massed groups. On the other hand, the preceding Zeppelin bombers maintained the inherent advantage of operating at ceilings that enemy fighters could not, becoming vulnerable during the landing process or when caught unawares but their bombing accuracy was suspect. For the Gotha, crash landings proved a somewhat all-too common occurrence and her flight characteristics tested the mettle of any pilot, particularly during night sorties. Gotha G-series construction was such that they proved to be rather robust machines, able to withstand a good deal of punishment from both regular combat usage and from enemy machine gun fire. The series inevitably served well in replacing the ponderous and expensive Zeppelins and limited light bombers and went on to form the backbone of the German bombing campaigns for the duration of the war. The increasing losses of Zeppelins only spurred development of a more defined solution that the Gotha became.

The original Gotha G.I production model arrived in 1915 and was produced in 20 examples, ultimately joined by the reworked G.II (11 examples) and the re-engined G.III (25 examples) in 1916. In 1917, the much improved G.IV was delivered and some 230 examples of this machine were produced out of Gothaer Waggonfabrik AG facilities, marking her as the definitive production G-bomber form to date. Its evolutionary features included a tunnel designed to allow the rear gunner to fire through the fuselage of the plane against lower targets as well as a plywood skin covering taking the place of fabric. However, this form still exhibited some operational limitations when placed into service, spurring the Gothaer concern to develop a more refined and improved version known as the "G.V". The design of this new Gotha bomber, like others previous, was attributed to engineer Hans Burkhard (Oskar Ursinus and Helmut Friedel designed the original G.I model). The aircraft achieved first flight in 1917 and formally entered operational service in August of that year. At least 205 examples were completed from the middle of 1917 to the end of the war in November of 1918 and all serving the Luftstreitkrafte solely, seeing extensive action along the Eastern and Western Fronts.

A forward machine gunner managed the front-most position in the bomber. The machine gun was fitted to a trainable ring mount for greater firing arcs against incoming frontal threats. The pilot managed a position just aft of the forward gun cockpit and set to portside along the fuselage wall, protected by nothing more than the frame and skin of the aircraft as well as a forward windscreen. Flight control was via a four-spoked steering wheel mounted atop a column. The instrument panel was ahead of the steering column with engine controls to the left. The internal bomb bay ("bomb chamber") and gangway of earlier G-series bomber aircraft was now replaced by an internal fuel store directly behind his position, forcing any ordnance to be held externally. The earlier G.IV model held its fuel tanks along the engine nacelles but this naturally posed a high risk to both crew and airframe alike, particularly upon crash landing - the fuel contents spilling out over the hot engines and igniting. The rear of the aircraft initially housed an additional pair of gun emplacements, one dorsal and another ventral. The dorsal position - fitting a machine gun on a trainable ring mount - could counter high-angled inbound threats while the ventral position (with rather limited fields of fire) was designed exclusively to deal with low inbound threats to threaten the aircraft's rather vulnerable underbelly. In later versions, the ventral gun was given up in favor of increasing the "Gotha Tunnel" firing arc for the dorsal position. This kept the rear gunner at his one placement without having to shift to another gun at another position. The Gotha series was crewed by only three personnel - made up of the forward gunner, pilot and rear gunner. Standard armament was two or three 7.92mm Parabellum MG14 series machine guns while up to 1,500lbs external ordnance could be carried aloft (standard load of 1 x 660lb bomb and 4 x 220lb bombs).©MilitaryFactory.com
Advertisements

The outward design of the G.V was characterized by its large, four-bay, swept biplane wing arrangement with parallel struts that sat over and under the fuselage. The fuselage was well-contoured at the nose for basic aerodynamics and slab-sided elsewhere, housing all of the crew and fuel. The engines were held outboard of the fuselage in relatively streamlined nacelles. The undercarriage was fixed and dominated by large landing wheels attached to the lower wing assembly. In its original form, the aircraft showcased a single vertical tail fin with applicable horizontal tail surfaces but later variants brought about a dual rudder system and biplane tailplanes for improved handling.

The G.V sported a running length of 40 feet, 8 inches with a wingspan of 77 feet, 9 inches. At rest, the aircraft stood at 14 feet tall. When empty, the G.V managed a weight of 6,039lbs while her Maximum Take-Off Weight registered at 8,745lbs. Power was supplied by 2 x Mercedes D.IVa series inline piston engines, each delivering up to 260 horsepower. Maximum speed was 87 miles per hour with an operational range of approximately 520 miles and a service ceiling up to 21,300 feet.

The Gotha V series was produced in a few major production variants beginning with the base G.V model of 1917 with its single tail rudder. 100 of the type were ordered. This mount was further developed in the upcoming G.Va model which introduced a new twin-rudder compound tail unit with biplane tailplanes (known in the German as the "Kastensteuerung"). The fuselage was shortened and at least 25 of the type were completed and delivered for service.

The G.Vb then appeared in June of 1918 with 80 examples on order. While most of these were delivered to German units, a final series was relocated to the authority of the Triple Entente at the time of the November 1918 Armistice. These versions saw an increase to ordnance payload carrying capability as well as an increased MOTW (Maximum Take-Off Weight). The main landing gears were now reinforced with double wheels and retrofitted on existing G.Vs when possible.

G.V bombers netted 83 tons of ordnance dropped on England during the whole course of the war. Daylight raids went on until the summer of 1917 before the G-bombers were set apart exclusively for night sorties. Despite its "newness", the G.V offered up no performance benefit over the existing G.IV series it was intended to succeed for it proved heavier (due to poor quality wood) and underpowered (due to poor quality fuel). Use of steel in their design was something of a pioneering feat concerning aircraft construction of the time.©MilitaryFactory.com
Note: The above text is EXCLUSIVE to the site www.MilitaryFactory.com. It is the product of many hours of research and work made possible with the help of contributors, veterans, insiders, and topic specialists. If you happen upon this text anywhere else on the internet or in print, please let us know at MilitaryFactory AT gmail DOT com so that we may take appropriate action against the offender / offending site and continue to protect this original work.
Advertisements

Up to 1,500lb of conventional drop bombs held externally. 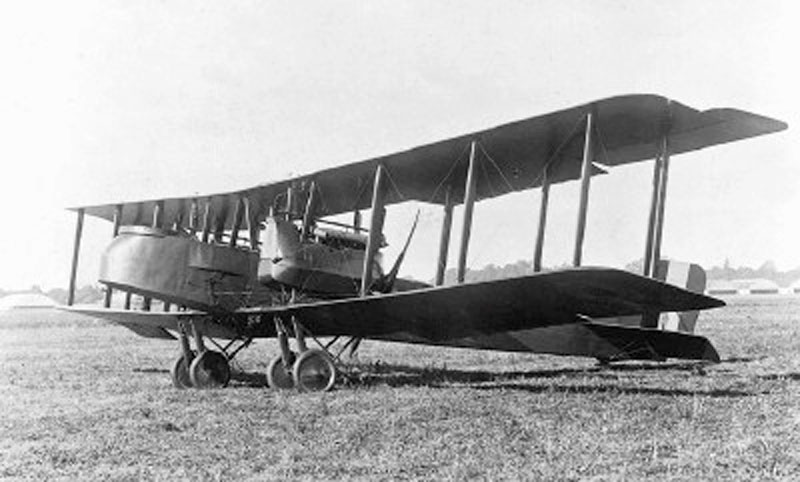