The IAI Heron has seen a blooming export market realize its potential.

Authored By: Dan Alex | Last Edited: 08/16/2022 | Content ©www.MilitaryFactory.com | The following text is exclusive to this site. 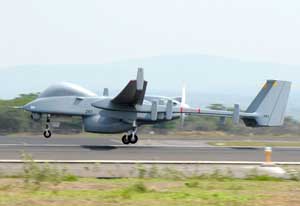 The IAI Heron (also known as the "Machatz-1") is a modern Unmanned Aerial Vehicle (UAV) currently in service with several military forces across the globe (IAI classifies their Heron as an "Unmanned Air System", abbreviated as "UAS"). The Heron was developed by Israel Aerospace Industries (IAI) (Malat division) and presents yet another in the ever-evolving line of capable UAV systems available to militaries today in which the UAV can be used to survey enemy movements, record mission actions or identify potential targets while keeping her pilots in relative safety. The Heron exhibits excellent inherent qualities that allow it to work in conjunction with ground and air forces at altitudes, ranges and loiter times that only serve to expand the tactical capabilities of any fighting force.

The Heron system consists of the aircraft unit itself and the applicable ground control station. Many of her facilities and functions are designed to be completely automated including fly-to-waypoint operation and take-off/landing actions. Guidance is via a GPS receiver and communications with ground control is accomplished through either satellite relay (SATCOM) or ground-based, direct line-of-sight (LoS) data link systems. The Heron is not armed per se, but instead can be used to feed airborne-based intelligence to accompanying units in the air or on the ground in real-time and in most any weather conditions. Like other UAVs in this class, the Heron can fly about on a pre-programmed mission flight path or direct control can be had by its ground-based personnel. The ground operator can also take over any automated Heron functions at any time. Other internal Heron systems include an Electro Optical TV/IR system, Synthetic Aperture Radar (SAR) facility and a Maritime Patrol Radar (MPR).

Like other UAVs serving in armed forces around the world today, the Heron takes on a conventional, somewhat basic, aircraft shape characterized by its long-spanning straight wings fitted high atop the fuselage. The fuselage is smoothly contoured to promote basic aerodynamic principles with the forward portion bulged to house necessary equipment. Similarly, the belly of the aircraft is also bulged for internal storage requirements including payload. The wings hold the boom extensions that support a pair of vertical tail fins. The tail fins are joined at their bases by a single horizontal plane. The fuselage ends in a sharp angle, this area containing the single engine placement and identified by its two-bladed propeller fixture. The undercarriage is fully retractable and consists of two single-wheeled main landing gear legs and a single-wheeled nose leg. The Heron measures a running length of 27 feet, 10 inches with a wingspan of 54 feet, 5 inches. Her maximum take-off weight is listed at 2,530lb and she can carry a 550lb payload.

Power for the Heron is supplied by a single Rotax 914 turbocharged, air- and water-cooled, 4-cylinder light class aviation engine of 115 horsepower with Austrian origins. This Rotax powerplant has proven popular in other military UAV mounts as well and was developed from the preceding Rotax 912 series. The engine is mounted in a rather unconventional "pusher" engine arrangement (as opposed to a "puller" propeller arrangement). Top speed for the UAV is 130 miles per hour with an operational range of up to 217 miles and a service ceiling of over 30,000 feet. In its base configuration, the Heron can remain airborne for up to 40 hours at a time.

Foreign operators have taken to the Heron with India being one of the largest owners of the type to date. Other forces include Australia, Brazil, Canada, France (as the "Eagle" by EADS), Germany and Turkey - though these having been delivered in relatively smaller numbers. It is believed that the Turkish Herons (designated as "Heron TP") are the most evolved of the Heron family line to date.

All told, the Heron exists in two distinct production forms as the "Heron 1" and the "Heron TP". The Heron 1 is the basic Medium-Altitude, Long-Endurance (MALE) UAV model with a 550lb payload capacity and a 52-hour mission endurance time while the Heron TP is an updated form fitting more advanced equipment with improved performance specifications and an inherently multi-role nature. The Heron TP retains the strengths of the original Heron design but is powered by a 1,200 horsepower turboprop engine installation (four-bladed assembly), can carry upwards of 2,200lbs of payload and reach altitudes of 45,000 feet. The enhanced performance capabilities do, however, reduce the expected mission endurance time to 36 hours though this is somewhat negligible considering the improvements to the basic design.

The Heron has already seen operational service with the Israeli military, particularly during operations over Gaza. In this scenario, the Heron worked in conjunction with Israeli helicopters and warplanes as well as advancing ground forces, supplying Israeli commanders with valuable real-time surveillance of the unfolding action - a far cry from the "blind" methods of waging war seen just a decade earlier.©MilitaryFactory.com
Note: The above text is EXCLUSIVE to the site www.MilitaryFactory.com. It is the product of many hours of research and work made possible with the help of contributors, veterans, insiders, and topic specialists. If you happen upon this text anywhere else on the internet or in print, please let us know at MilitaryFactory AT gmail DOT com so that we may take appropriate action against the offender / offending site and continue to protect this original work.

January 2016 - Germany is in negotiations with Israel to lease Heron TPs to replace their current, active stock of Heron I systems.

August 2016 - The German Army plans to deploy Heron 1 UAVs in the skies over Mali as reconnaissance platforms in support of U.N. actions there.

May 2017 - Unmanned Heron 1 aircraft have been selected by the nation of Israel to replace the fleet of manned Sea Scan (Shahaf) aircraft currently in use. This version of the Heron will feature a radar fit developed by Elta and an optics fit by Taman.

2017 - The Royal Australian Air Force gave up use of two Herons, retired sometime in 2017.

February 2018 - India is expecting to receive a delivery of ten Heron TP systems in 2018.

June 2018 - The German government has given approval to leasing Heron-TP examples from IAI. The Heron TP was competing against the General Atomics MQ-9 Reaper, which could carry armament.

July 2018 - The Heron TP has been tested with SATellite COMmunications (SATCOM) by IAI (as part of "Team Artemis"). The feature will be used to satisfy a Royal Canadian Air Force requirement for its Remote-Piloted Aircraft System (RPAS) program. The "Artemis" UAV will be based in the Heron TP and the contract will be awarded to a winning party sometime in 2020 or 2021.

March 2019 - The IAI Heron TP is one of several UAVs that will content for a Japanese Coast Guard requirement encompassing twelve drones.

May 2019 - The Heron TP is a possible acquisition target for Canada, competing with the American MQ-9B line.

June 2019 - IAI has revealed details of a new, dimensionally smaller / short-take-off, version of its Heron UAV - the "Heron-T". This entry will be vehicle-portable (requiring two trucks) and intended for limited frontline use. Power is to come from a single Royax engine of 100 horsepower providing speeds of 120 knots flying up to an altitude of 24,000 feet out to a range of 240 km. Market entry is expected before the end of 2019.

February 2020 - IAI has debuted a more-capable Heron version dubbed "Heron II" at Singapore Airshow 2020. The Asian UAV market is of particular focus for the Heron II and IAI.

May 2020 - It was announced that Greece will be leasing (with an end-option to purchase) a pair of maritime-minded Heron UAVs - equipped with search radar and EO equipment - for its Hellenic Air Force for the period of three years. The pair will be used to patrol/enforce maritime borders amidst the backdrop of the country's immigration / refuge crisis.

October 2020 - Azerbaijan has been using its Heron fleet in the ISR role in its war against neighboring Armenia.

September 2020 - IAI has successfully landed a Heron UAV at Tel Aviv's Ben Gurion International Airport, said to be the first such event in history where an unmanned aircraft was operated alongside active commercial traffic.

July 2022 - A shipborne / carrierborne capability for the Heron UAV series has been discussed by IAI at Farnborough 2022.

August 2022 - The Czech Republic has selected the Heron 1 drone for its standing UAS requirement.

(Showcased performance specifications pertain to the base IAI Heron / Machatz-1 production variant. Performance specifications showcased above are subject to environmental factors as well as aircraft configuration. Estimates are made when Real Data not available. Compare this aircraft entry against any other in our database or View aircraft by powerplant type)
None. Mission payload consists of specialized equipment only, namely cameras and sensors. 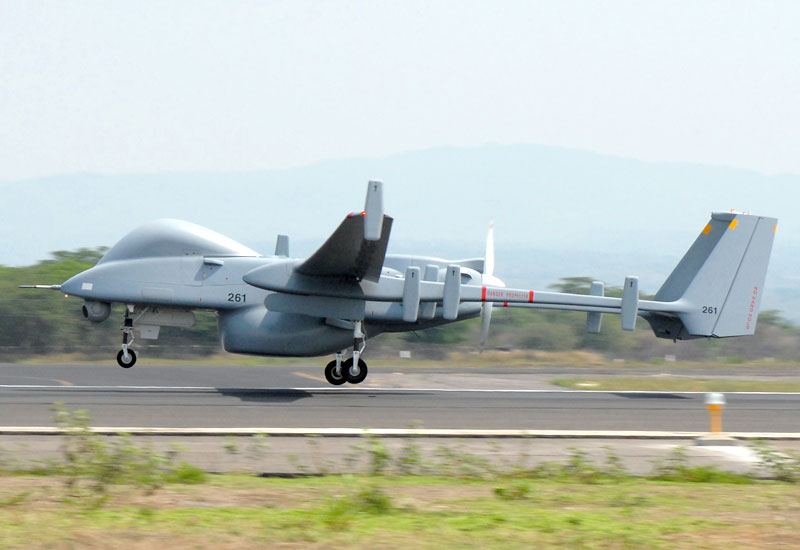