The Horten X continued the Horten Brothers love affair with the flying wing concept, though the fighter was never completed.

Authored By: Staff Writer | Last Edited: 12/26/2016 | Content ©www.MilitaryFactory.com | The following text is exclusive to this site. 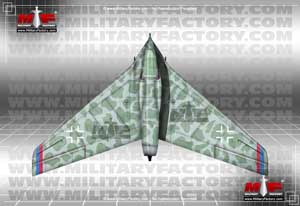 The Horten Ho X (10) continued the Horten Brother's love affair with the flying wing concept. The concept was notably solidified in their well-known Ho 229 flying wing fighter which was ultimately realized in the modern Northrop B-2 Spirit stealth bomber. The Ho 229 itself was completed by war's end but never entered mass production and was ultimately captured by the United States Army. One of the sole completed examples was evaluated stateside and now remains in storage in a Washington, D.C. museum. The Ho X was developed to an RLM requirement for a cheap, easy-to-produce fighter that could be fielded in quantity for the final defense of Germany.

The war had begun to collapse on all sides for Hitler and his mighty German war machine and a vicious defense was all that would stand between the nation and total conquer from either the Allies to the West or the Soviets to the East. Allied bombers wreaked havoc on German infrastructure and made for a logistical nightmare. Allied fighters now found the range to escort their heavy brethren to and from German territories and losses to the Luftwaffe made for a light defense of key target areas. As such, the desperate times called for equally-desperate measures and German aircraft engineers did not disappoint. The RLM requirement also specified that the new fighter should match (or overtake) the performance qualities of anything the Allies could field at the time. The top-performing Allied fighters in Europe by war's end became the British Supermarine Spitfire and the American North American P-51 Mustang and mounts like the American Republic P-47 Thunderbolt were also of note. The German project, issued on September 8th, 1944, took on the name of "Volksjager" (meaning "People's Fighter") and several firms were handed the requirement.

The Horten Brothers were not included in the project but elected to try their hand at fulfilling the requirement nonetheless. The Horten X was based upon the ongoing development of the Ho 229 flying wing and borrowed many of her inherent concepts including the lack of vertical tail surfaces, use of a pressurized cockpit and a jet-powered propulsion system. To fulfill the requirement that stated use of non-strategic war materials, the Ho X would make heavy use of wood over a steel pipe frame. The fuselage would have incorporated steel with wood beams covered over in plywood. Similarly, the wings were also of wood and covered over in plywood. The fuselage would maintain the armament, cockpit and engine. Additional RLM specifications included use of the BMW 003 series turbojet, a 30-minute flight endurance and a 457 mile-per-hour maximum speed.

The overall shape of the X was of a wedge and utilized extensive sweep back along the leading and trailing wing edges. The wing roots themselves sported a surface sweep of up to 60 degrees. The fuselage was aerodynamically contoured with a nose cone at the front and a tapered shape towards the engine exhaust ring aft. Of note to the X's design was the use of two side-mounted intakes to aspirate the buried jet engine behind the pilot. The intakes delivered the air through a curved duct system straight into the front of the jet engine. The pilot sat in a pressurized cockpit under a large-area, curved canopy with excellent forward, upward and side views. Armament was rather modest and would have consisted of a single 30mm MK 103 or 30mm Mk 213 cannon in the underside of the nose cone. This cannon would have been supplemented by a pair of 13mm MG 131 machine guns, one afforded to each wing root. Control of the Ho X (as it fielded no vertical tail fins) was to be through combined movements of the ailerons and elevators held along the wing trailing edges. Drag for lateral control would have been supplied by wingtip installments. The undercarriage would have been of a tricycle arrangement featuring two main landing gear legs and a nose leg, all fully-retractable into the fuselage underside.

The Ho X measured in with a 45 feet, 11 inch wing span and a length of 23 feet, 8 inches. Her height was listed as 7 feet, 6 inches. Max weight was listed at 13,393lbs. Performance from her engine was estimate to bring a service ceiling of 49,212 feet with a range of 1,243 miles. An optimistic top speed of 684 miles per hour was envisioned, superior to that of the original RLM requirement.

The war progressed far too quickly for the Ho X to see much in the way of completion. While several scale models were ultimately produced, a full scale engineless glider was never completed. The war for Germany came to a close by June of 1945 and, as such, the Ho X fell to the history books.

Of the firms that participated in the Volksjager program, Heinkel became the winner with their He 162 "Volksjager" single-seat, jet-powered fighter. The aircraft mounted the turbojet engine on the top of the fuselage and was designed from available construction materials for mass production. Additionally, it was envisioned that the He 162 could be piloted with little training, allowing the little fighter to be thrown into the skies in quantity. Over 250 are thought to have been built before the end of the war but how many of these were actually operation is debatable. A further 600 were found incomplete along assembly lines. The He 162 did, in fact, go on to see limited combat actions against Allied forces beginning on April 19th, 1945. Like the Ho 229, the He 162 was delivered to the Americans (and British, Soviets and French) for post-war evaluation.©MilitaryFactory.com
Note: The above text is EXCLUSIVE to the site www.MilitaryFactory.com. It is the product of many hours of research and work made possible with the help of contributors, veterans, insiders, and topic specialists. If you happen upon this text anywhere else on the internet or in print, please let us know at MilitaryFactory AT gmail DOT com so that we may take appropriate action against the offender / offending site and continue to protect this original work.
Advertisements

(Showcased performance specifications pertain to the base Horten Ho X production variant. Performance specifications showcased above are subject to environmental factors as well as aircraft configuration. Estimates are made when Real Data not available. Compare this aircraft entry against any other in our database or View aircraft by powerplant type)
PROPOSED:
1 x 30mm MK 108 cannon OR 1 x 30mm MK 213 cannon in nose.
2 x 13mm MG 131 machine guns, one per each wing root. 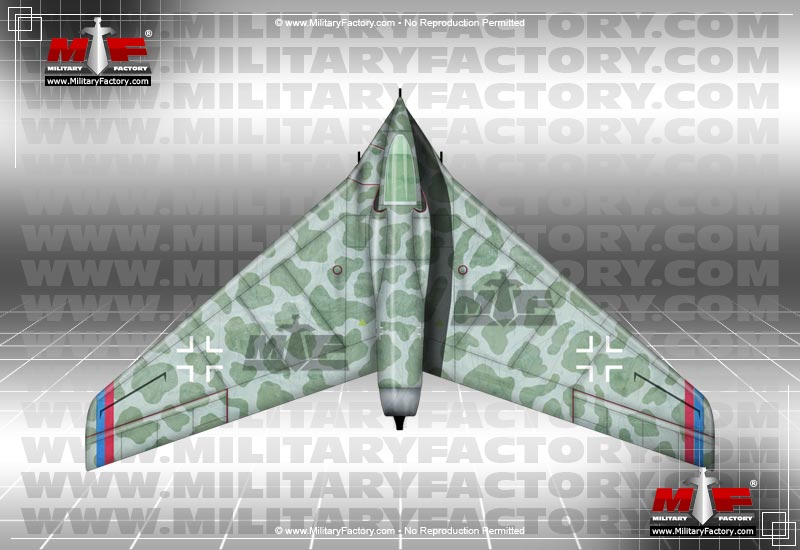