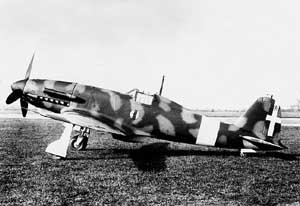 Undoubtedly, the Fiat G.55 Centauro (Centaur) served as Italy's best fighter design of World War 2. The type made use of a license-produced version of the excellent German Daimler-Benz DB 605A series inline engine and featured an enclosed cockpit - the latter a rarity among Italian fighter aircraft of the war. Production was delayed until 1943 but 274 total examples were ultimately produced during wartime, joined by a further 75 examples after the war. The G.55 proved an excellent fighter design, mating an advanced streamlined and aerodynamic airframe with a powerful engine to produce a robust and reliable gun platform. The G.55 was a major improvement over the radial-engined, open-air cockpit G.50 Freccia fighter series.

Fiat's Giuseppe Gabrielli
Design of the G.55 was credited to Giuseppe Gabrielli. Gabrielli served as an aeronautics engineer within Fiat and had already garnered valuable experience in the field, including design of the preceding G.50. Gabrielli would gone on to complete some 142 total aircraft designs during his stellar career including that of the first Italian jet fighter - the Aeritalia G.91 - and the impressive G.222 universal military transport aircraft.

The G.55
Gabriell's G.55 design was a combination of smooth lines and aerodynamic refinement. Selection of the German Daimler-Benz inline only benefitted the type and immediately made her the best fighter mount Italy could field. Prior to the war, Italian pilots generally preferred their fighters with open-air cockpits for the excellent visibility and freedom but high-altitude and high-speed flight necessitated an enclosed canopy - something these "romantic" Italian airmen would have to accept moving forward. Her design was such that care was given to support speedy production methods meant to get as many G.55s into Italian fighter groups as quickly as possible. Three prototypes were eventually constructed with the first of these (both the first and second were unarmed) becoming airborne on April 30th, 1942. The third prototype served as the invaluable gun test platform. Even while the prototypes were under evaluation in operational settings, the Italian government had already contracted the type for full-scale production.
Advertisements

In practice, the G.55 proved a strong airframe, able to withstand a good deal of punishment and get her airmen back home. Visibility was noted as excellent thanks to the raised cockpit and spacious canopy while her engine made her a stellar performer when pitted against her Allied contemporaries. Handling was reportedly excellent as well and made for a superior dogfighting platform to the extent that Italian pilots (and Luftwaffe pilots for that matter) greatly respected the G.55. Armament was equally impressive and formed from a collection of powerful cannons and machine guns.


The G.55 saw first combat in March of 1943 and were used in the defense of Rome itself with the 353 Squadriglia. In September of 1943, Italy officially capitulated to the advancing Allies with only 16 examples of the pre-production G.55/0's and 15 examples of the production-level G.55/1's having been completed. Despite Italy's surrender, factories still under Fascist control continued production that ultimately resulted in 274 total Centauros - many of these now being delivered to relocated Italian forces in the north. The National Republican Air Force (ANR) was set up in Fascist-held Northern Italy under Italian dictator Benito Mussolini after 1943 to continue Italy's war against the Allies. Despite their presence along this front, the G.55s in service suffered heavily from the regular Allied strikes - many G.55s being lost while on the ground. The G.55s still under fascist control were fielded by the Squadriglia "Montefusco" out of Venezia Reale. Three further G.55s squadriglias formed the 2 Gruppo Caccia Terrestre. The German Luftwaffe thought highly enough of the G.55 to field it within its own ranks from 1944 to 1945. In capable German hands, the G.55 was more than a match for even the best of the Allied fighters.

While the war still raging on in early 1944, Fiat fitted a pair of G.55 prototypes with Daimler-Benz DB 603A series engines under the new designation of "G.56". The airframe was only slightly revised and the fuselage machine guns were dropped to save weight and allow for more internal space. Despite improved performance for this new aircraft, it was not put into quantitative production due mainly to shortages involving the availability of the DB 603 series engines at this point in the war. One of the two G.56s survived the war and was used as an evaluation test bed by Fiat.

In post-war Europe, the G.55 continued a limited existence. Fiat reclaimed about 30 unfinished G.55s and delivered them to the rebuilding Regia Aeronautica as well as the Argentine Air Force. Argentina eventually passed on some of their used G.55As to Egypt in 1948. These were ultimately used against the Israelis in the 1948 "War of Independence", seeing combat against Israeli Air Force Avia 199 fighters.

G.55 Walk-Around
Design of the Fiat G.55 was one of the most pleasant of all the fighter aircraft involved in World War 2. The type sported clean lines and a smooth contour that were generally absent from preceding Italian fighter designs during the war. The engine was set within its compartment well forward of the design, spinning a three-bladed propeller system. G.55 construction was of all-metal. The rounded low-wing monoplane wings were situated forward of amidships, ahead of the cockpit. The cockpit was more or less centered along the oval fuselage with a raised two-piece canopy offering good vision despite its framing. Views were excellent along the sides and forward but hampered somewhat by the G.55s long nose and raised fuselage spine. The fuselage tapered off into the empennage which sported a single rounded vertical tail fin. Stabilizers were equally rounded and fitted at each side of the empennage, mounted slightly higher than the main wings. The undercarriage was wholly retractable and consisted of two single-wheeled main landing gear legs and a tail wheel under the empennage.

G.55 Armament
Armament varied slightly between the G.55 pre-production and production models. The G.55/0 sported a single Mauser 20mm MG 151/20 series cannon firing through the propeller hub. The cannon was afforded 250 rounds of ammunition. This was complimented by no fewer than four 12.7mm (0.50 caliber) Breda-SAFAT machine guns. Two were affixed to the upper engine cowling and two were fitted into the lower cowling near the wing roots. The machine guns were afforded 300 rounds of ammunition per individual gun.

G.55/1 armament was more impressive, made up of three 20mm Mauser MG 151/20 series cannons and 2 x 12.7mm Breda-SAFAT machine guns. One cannon fired through the propeller hub as in the G.55/0 with the remaining pair set in the wings. Each cannon was afforded 200 rounds of ammunition. The two machine guns were fitted to the upper engine cowling and given 300 rounds per gun. Additionally, the G.55/I was rigged to carry up to 2 x 353lb bombs or fuel drop tanks for increased range.

Power and Performance
Power for the production-level G.55/1 was derived from a single Fiat RA-1050-RC-58 "Tifone" series engine. This powerplant was a hanging, liquid-cooled, inverted V12 inline engine that was nothing more than a license-produced version of the German Daimler-Benz DB 605A-1 series engine under the Fiat branding. Horsepower output was listed at an impressive 1,475.

Performance - coupled with the excellent airframe design - netted the G.55 a top speed of about 390 miles per hour. She could gallop up to 41,000 feet and cover some 745 miles of airspace on internal fuel - more with external fuel tanks in place underwing.

Argentina; Egypt; Kingdom of Italy; Syria
(OPERATORS list includes past, present, and future operators when applicable)
✓ Air-to-Air Combat, Fighter
General ability to actively engage other aircraft of similar form and function, typically through guns, missiles, and/or aerial rockets. ✓ Ground Attack (Bombing, Strafing)
Ability to conduct aerial bombing of ground targets by way of (but not limited to) guns, bombs, missiles, rockets, and the like. 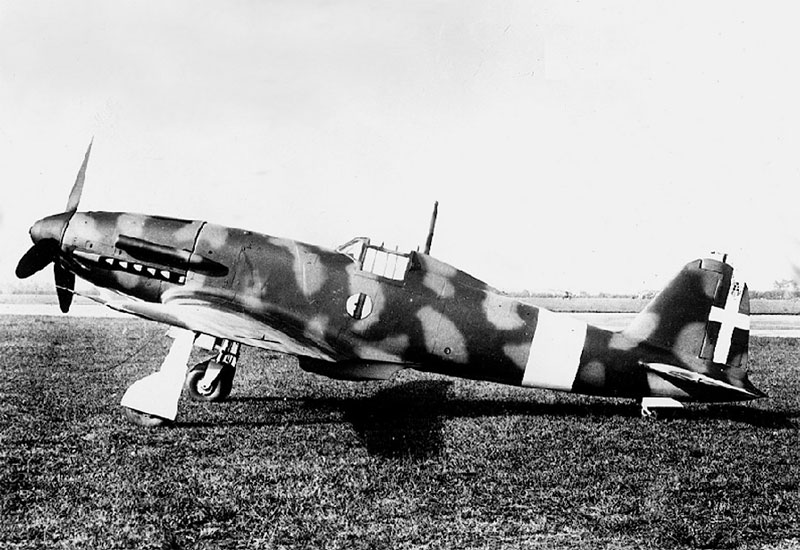 Left side view of the Fiat G.55 Centauro fighter at rest