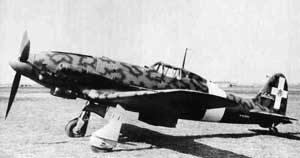 The Macchi C.205 "Veltro" ("Greyhound") - also known as "MC.205" - was a further evolution of the Macchi C.202 "Folgore" of 1941. Indeed, the aircraft retained the basic design lines of its progenitor but added the powerful German Dimler-Benz DB 605 series engine to the mix, producing an excellent Italian fighter of World War 2. Through a more refined design, the C.205 proved itself a top-flight performer on par with some of the best fighter developments of the war and incorporated a machine gun/cannon mix armament with ground-strike capabilities to boot. However, line was only produced in the hundreds by war's end and never made a large imprint on the Italian war situation before the surrender of September 1943. It also served with German and Croatian forces before the end and found a post-war career Egypt. The last elements were retired in 1950 (Egypt).

The Italians formed a collection of strong fighter types under the "Series 5" name and these included the Macchi C.205, the Fiat G.55, and the Reggiane Re.2005. The common denominator across all three designs was use of the excellent German Daimler-Benz DB 605 series engine which allowed Italian industry to concentrate more on development and production of fighters than a costly, temperamental powerplant. Fiat undertook local, licensed production of the DB 605 as the RA.1050 RC58 "Tifone" ("Typhoon") which simplified matters considerably. When project head Mario Castoldi mated the engine to the existing airframe of the C.202 "Folgore", the new C.205 "Veltro" designation was born. Alternatively, the aircraft was also known as the "MC.205" for "Macchi Castoldi".
Advertisements

First flight of the re-engined aircraft was recorded on April 19th, 1942 and its lines clearly showcased its C.202 origins for little had been changed in the new design. The aircraft continued the streamlined look established by the Folgore including its low-set monoplane wings, raised fuselage spine, and long nose assembly. The cockpit was set at midships, aft of a engine compartment at front, with the pilot under a framed canopy hinged to open to starboard. The engine drove a three-bladed propeller assembly in the usual way. The fuselage cross section was well-rounded to promote aerodynamic efficiency with the needed internal volume for avionics, fuel, and armament. The tail unit consisted of a single short, rounded vertical tail fin with low-mounted horizontal planes. All of the wing surfaces held rounded wingtips to promote an elegant shape. The tail-dragger undercarriage was wholly retractable including its little tail wheel. One of the notable external changes in the C.205 was its installation of two oil radiators along the side of the fuselage.

Standard armament became 2 x 20mm MG 151 cannons and 2 x 12.7mm Breda-SAFAT machine guns, all in the wings. 250 x 20mm projectiles were afforded the twin cannon arrangement and 400 x 12.7mm ammunition was given to each machine gun. The air force also requested support for ordnance-carrying which was granted through provision for 2 x 350lb bombs for the ground attack/fighter-bomber role. Of note is that the C.205 became the first Italian fighter to incorporate 2 x 20mm cannons into its armament suite - a very modern quality of the period.

The C.205 was pushed through flight testing and production was called for immediately - such was the importance of the new fighter. The Italian government ordered 250 and the first of these was available for September 1942. However, the aircraft was a complicated design which led to slow production and, coupled with Italian strategic materials shortages and available industry, limited per-month production totals. As such, only ten were available by the end of the year and less than twenty still by the following February. The C.205 was formally in service during April of 1943 and these primarily served in support of Italian forces in the Mediterranean Theater. The initial production batch of 100 aircraft was finally completed for June.

In practice, the aircraft is said to have been comparable to the best of the Allied fighters of the period in terms of both agility and speed. Its contemporaries were the German Messerschmitt Bf 109G, the British Supermarine Spitfire Mk.IX, the Japanese Kawasaki Ki-61 "Hein", and the Soviet Yakovlev Yak-9D which was good company for the Veltro. Undoubtedly much of its success was made possible by the availability of the German engine but the proven design of the C.202 Folgore certainly added to what could have been Italy's most successful fighter of the war had it not been for circumstances dictating its overall reach. It certainly held the key qualities that made for a classic fighter of the period. Its armament was also considerable, particularly for an Italian aircraft.

Through 1943, the war situation in and around Italy was favoring the Allied advances which eventually forced the Italian armistice on September 3rd, 1943 (formally announced on September 8th). While this ended Italy's official participation as an Axis power in the war, the country was now split between Nazi-supported loyalists and those siding with the Allies. As such, the existing stock of C.205 fighters was divided along these lines with co-belligerent forces operating about 37 of the type and 28 serving with the Nazi-supported Republica Sociale Italiana. Additional production into May of 1944 brought up enemy-serving C.205 totals by 112 more aircraft and some also served through the Luftwaffe with squadron II/KG 77 and four served with the Independent State of Croatia, a Nazi-puppet state.

The C.205 continued in service for both sides of the war until its end in May of 1945. The rebuilding Italian Air Force made use of a small stock in the years following until the line was given up for good in May of 1947, replaced by surplus British Supermarine Spitfires.

In all, 262 C.205 Veltros were produced from September 1942 to May of 1944 and used by Italy, Germany, Egypt, and Croatia. It saw its last combat service during the 1948 Arab-Israeli War. Only three survive as museum showpieces today.
Advertisements 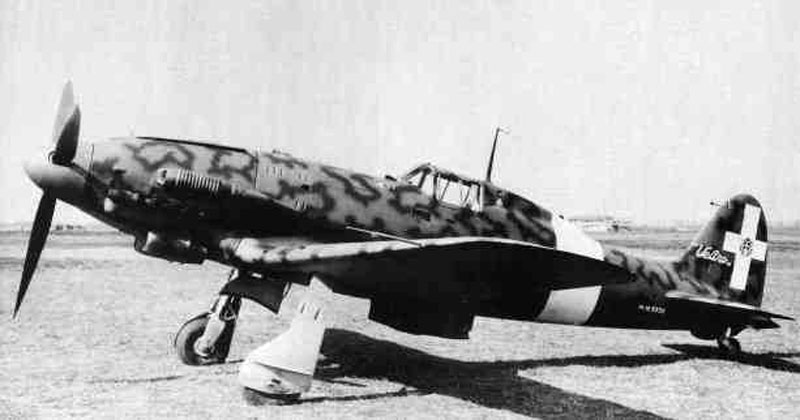 Left side view of the Macchi MC.205 Veltro at rest