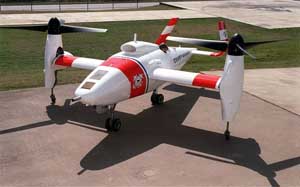 The Bell Eagle Eye (company Model 918) is/was an Unmanned Aerial System (UAS) developed to compete in the US Navy's "Vertical Take-off - Unmanned Aerial Vehicle program" (VT-UAV). Like most other current-generation UAVs, the Eagle Eye is billed as a system that can work in adverse weather conditions and provide real-time battlefield assessment reporting for her operators. The program claims to promotes less in the way of the required manpower and maintenance hours than that of conventional manned aircraft currently in service. The use of UAV/UAS systems also deletes the possibility of a pilot being downed and killed or captured by the enemy as UAV/UAS operators can be stationed stateside without direct exposure to the enemy itself.

There is an inherent benefit to a rotary aircraft systems and their ability to land and take-off from solid surfaces. Such a platform does not require a runway or launch catapult/retrieval net system from which to operate with. A tilt-rotor system can take-off and land as would a conventional helicopter but can fly as a conventional fixed-wing aircraft thanks to its adjustable engine nacelles. Loitering for a rotary-type aircraft is an advantageous proposition when compared to the fixed-wing, straight-flight first and second generation UAVs like the Predator series - such "birds" needing to circle around a given target area. The Eagle Eye can utilize its twin-rotor capability to stand "on station" in a given airspace for the duration allowed by its internal fuel supply. Of course, this can expose the Eagle Eye to more accurate ground-based fire for its hovering nature and size may promote for a bigger, more stationary target. The Eagle Eye has also completed testing from both land- and sea-based origins proving further its capability. The latter environment is of note for it exposed the UAS to a variety of sea conditions including an unstable launching/retrieval platform and the expected corroding sea elements that generally take a toll on internal and external systems alike.

Bell began work on the Eagle Eye in 1993 and constructed its first scale model prototype under the designation of "TR911X". Two demonstrator examples were eventually produced under this mark with a first-flight recorded on March 6th, 1998. Each of these prototypes mounted a single Allison 250-C20 series turboshaft engine. Shortly thereafter, the Eagle Eye was entered into a requisite flight test program that would consist of two phases - one based on land and the other at sea. While the first prototype was lost to accident during the ensuing trials, the second prototype managed to complete its trials without notable incident. While the US Navy and the US Marine Corps both held early interest in the UAS, the Eagle Eye languished without suitors for a time and no further evaluation models were ordered by any parties.

In 2002, a full-size version was constructed under the designation of "TR918". This new version was fitted with a single Pratt & Whitney Canada PW207D turboshaft engine. The United States Coast Guard took interest in the tilt-rotor system and worked with Bell on a larger version of the original technology demonstrator. In theory, the Eagle Eye would have been a good match for the Search and Rescue (SAR) minded Coast Guard, able to utilize its excellent loitering times in search of at-sea survivors or tracking down corruptible elements attempting to smuggle "goods" onto US soil. The resulting Bell/USCG design became the "HV-911". However, once again the Eagle Eye would wait for its "day in the sun" for the Coast Guard ended up putting the earmarked production funds on indefinite hold.
Advertisements

Design of the Bell Eagle Eye is not unlike that of the larger manned Bell-Boeing V-22 Osprey tilt-rotor transport helicopter. The Eagle Eye features a centralized fuselage containing the major electronic and digital components that bring life to the system as well as manage the main powerplant. Straight wings are affixed to the fuselage and each maintain a single rotor system via drive shafts from the coupled transmission system. There is a noticeable air intake scoop mounted to the top of the fuselage and the fuselage itself tapers off into the empennage. The tail section features horizontal stabilizer planes to either side and each mounts an inclined vertical tail fin. The undercarriage is made up of two double-tired main landing gear legs, one fitted as a nose leg and the other as a fuselage leg. There is a pair of smallish outboard landing gear legs fitted to the rear of each rotor nacelle and come into play when the nacelles are in the fixed upward angle during landing/takeoff. The payload capacity of the Eagle Eye is a reported 200lbs and can be utilized for reconnaissance, surveillance, Electronic Warfare (EW) and armament loads as a given sortie requires.

If the developmental HV-911 is taken as the final production form, it could feature the aforementioned Pratt & Whitney Canada PW207D series turboshaft engine. This powerplant will deliver up to 641 horsepower to the pair of outboard tilt-rotor assemblies mounted to each wingtip. Each rotor assembly spins a three-bladed rotor system. Based on the evaluation test results, the Eagle Eye will feature a maximum speed of up to 225 miles per hour with a service ceiling of roughly 20,000 feet. Endurance from the single engine will be roughly six hours - an excellent advantage when considering the loitering nature of battlefield UAVs or Search and Rescue (SAR) airborne elements.

Though American procurement of the Eagle Eye has stymied, there has been more interest developed by foreign powers overseas. Bell has teamed up with the German firm of Rheinmetall Defense Electronics and the French firm of Sagem to possibly bring the Eagle Eye to operational service in European inventories. This arrangement is such that - assuming they blossom - the European bureaus will be able to assign whatever payload is needed for their particular Eagle Eye airframe. Bell will simply be responsible for construction and delivery of the machine airframes, engines and avionics systems themselves. Such is the flexibility inherent in the Eagle Eye design.

Per Bell, the Eagle Eye is "the most versatile UAS on the market".
Advertisements

(Showcased performance specifications pertain to the base Bell Eagle Eye (Model 918) production variant. Compare this aircraft entry against any other in our database or View aircraft by powerplant type)
Up to 200lb of equipment or armament. 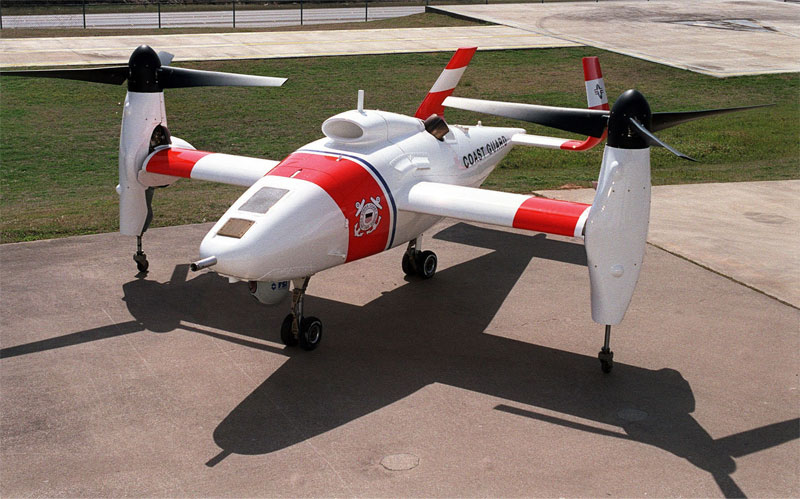