HESA Shafaq (Before the Dawn)

The two-seat HESA Shafaq is intended for the trainer role but can double as a light attack aircraft if need be.

Authored By: Staff Writer | Last Edited: 07/13/2022 | Content ©www.MilitaryFactory.com | The following text is exclusive to this site. 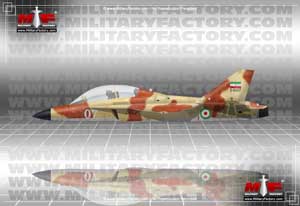 The Shafaq (formally known as the "Integral" and translating to "Before the Dawn") is a two-seat, lightweight-class multi-role fighter aircraft with Russian origins. After the dissolving of relations between the United States and itself, Iran went on to maintain a stronger military relationship with Russia and has purchased millions of dollars in equipment from the northern nation over the decades. Not until recently has the Islamic nation been working hard at producing indigenous military products with little help from the outside world. The Shafaq is intended as a multi-purpose airframe, resulting in the proposed construction of three distinct aircraft types emanating from the base design. These are said to be a two-seat advanced trainer (retaining its strike capability), a two-seat light strike fighter and a single-seat light strike fighter. In any case, the Shafaq will be offered in whatever configurations the Iranian Air Force requires.

Iran worked with Russian officials in the early days of the Integral program that eventually produced the Shafaq. In a some type of professional exchange program between the two nations, Russian officials from Mikoyan and Sukhoi were sent to Iran to assist in the development of a new lightweight fighter. Officials were quick to note that, while the involvement of the Russians was noted in the early portion of the program, the Shafaq is wholly an Iranian design. The aircraft itself was designed at the Aviation University Complex and, at some point, the relationship with Russia dissolved for unstated reasons resulting in the Iranians going along with the project alone. The resulting aircraft became the Shafaq that was unveiled in smaller 1/7th scale wind tunnel model form, ultimately leading up to a full-scale model. A patent related to the design was assigned in 2001 with a design showcased publically sometime in 2003. A planned first flight was set for 2004 though it is arguable that this ever took place for the first prototype was slated for completion sometime in 2008 though it is unclear whether even this target date has been met.

The Shafaq is said to offer stealth-like qualities by way of using a specially-coated, radar absorbing skin to retard radar signals and therefore remain less conspicuous to active radar. It sports two Russian-brand ejection seats (K-36D series) for both of her crew - seated in tandem with the pilot in front and the radar operator/instructor to the rear - and an all-glass digital cockpit comparable to Western fighter types of this class. The two-seat arrangement is only applicable in the two-seat Shafaq configuration.

Like most other new military developments coming out of Iran, the Shafaq has little in the way of public data available. It is reported that power will come from a single Russian Klimov RD-33 turbofan engine delivering some 11,230lbf of thrust (or possibly an indigenous form of the American J79 engine, technology the Iranians have had experience with in the past). Maximum speed is estimated to be approximately 715 miles per hour with a service ceiling of 55,040 feet and a rate-of-climb of 21,650 feet per minute. However, reports are contradictory when it comes to deciding whether the Shafaq will be a supersonic or subsonic aircraft. Armament is assumed at this point, encompassing the "Fatter" Shahbaz" and "Sattar" class of missile systems.

Judging from the available photographs of scale models and perhaps the single completed prototype, the Shafaq bears an uncanny resemblance to the proposed YF-17 Cobra lightweight fighter. The YF-17 was a competitor in the American lightweight fighter program that resulted in the selection of the excellent General Dynamics F-16 Fighting Falcon. The YF-17 Cobra was eventually revised to become the production form of the larger multi-role McDonnell Douglas F/A-18 carrier-based fighter. The Shafaq maintains a similar outward design approach to this YF-17, with the exception of the elliptical surface area just aft of the cockpit, and is comparable in overall design to the Northrop F-5 Tiger as well. The two-man crew sit under a three-piece canopy with a nose come assembly just ahead, no doubt housing the internal radar array. The main wings are somewhat short and sport sweep along both the leading and trailing edges. The large fuselage area and wings allow for the use of up to seven hardpoints with three of these located under the fuselage itself and the remaining four the wings, two to a wing. The empennage is conventional by modern standards and sports two vertical tail fins angled outwards as well as a pair of horizontal planes with sweep along both edges and clipped wing tips. Intakes are mounted along the sides of the fuselage and aspirate the single powerplant buried deep within the system. The intake openings are rectangular in shape and angled inwards to contour with the fuselage sides. The undercarriage is conventional and made up of a pair of single-wheeled main legs and a single-wheeled nose landing gear leg.

Of note is that funding for the program is reported to have come by way of the Islamic Revolutionary Guard Corps as opposed to the regular military.©MilitaryFactory.com
Note: The above text is EXCLUSIVE to the site www.MilitaryFactory.com. It is the product of many hours of research and work made possible with the help of contributors, veterans, insiders, and topic specialists. If you happen upon this text anywhere else on the internet or in print, please let us know at MilitaryFactory AT gmail DOT com so that we may take appropriate action against the offender / offending site and continue to protect this original work.
Advertisements

Iran
(OPERATORS list includes past, present, and future operators when applicable)
✓ Air-to-Air Combat, Fighter
General ability to actively engage other aircraft of similar form and function, typically through guns, missiles, and/or aerial rockets. ✓ Close-Air Support (CAS)
Developed to operate in close proximity to active ground elements by way of a broad array of air-to-ground ordnance and munitions options. ✓ Training (General)
Developed ability to be used as a dedicated trainer for student pilots (typically under the supervision of an instructor).

(Showcased performance specifications pertain to the base HESA Shafaq (Before the Dawn) production variant. Performance specifications showcased above are subject to environmental factors as well as aircraft configuration. Estimates are made when Real Data not available. Compare this aircraft entry against any other in our database or View aircraft by powerplant type)
Unknown. Expected to include an internal cannon for close-in defense and a collection of air-to-air missiles, air-to-surface missiles, guided munitions, rocket pods and conventional drop ordnance. 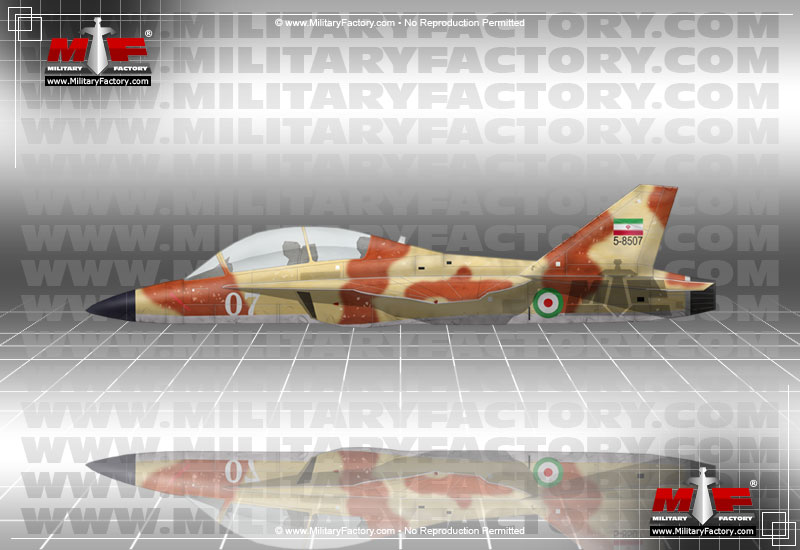