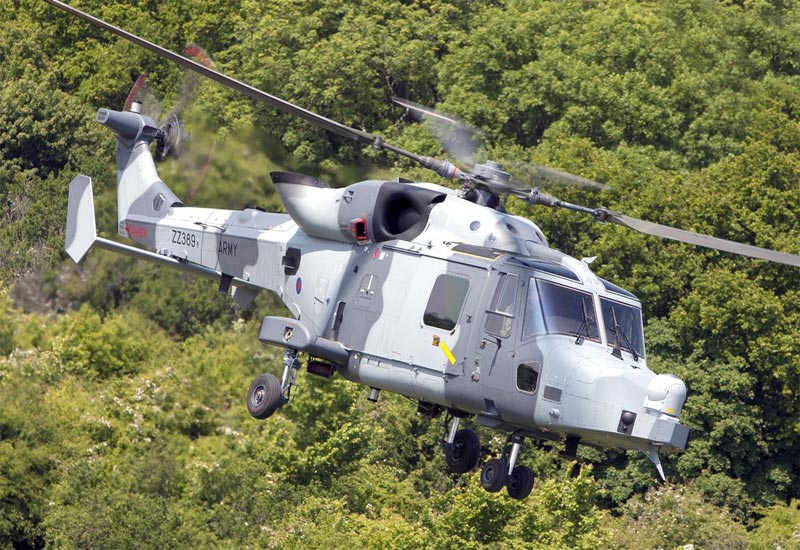 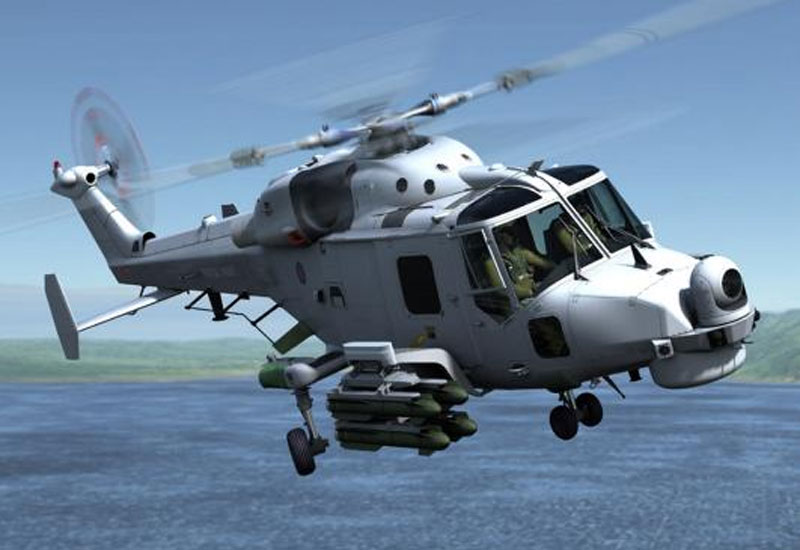 An artist depiction of a British Royal Navy Lynx Wildcat helicopter as showcased on the AgustaWestland.com.
❮ ❯

The Leonardo AW159 platform was designed as a direct replacement of existing, aging Lynx helicopter systems for the British Army and Royal Navy services - it has since been adopted by others.

The AgustaWestland (now Leonardo) AW159 "Lynx Wildcat" is an relatively new, thoroughly improved and modernized form of the successful "Lynx" series multi-role helicopter expected to enter service with the British military in a few years. The Wildcat itself is based on the "Super Lynx 300" and sports a new tailboom, cockpit, avionics and sensor suites and undercarriage. The Wildcat was initially known under the designation of "Future Lynx" before being renamed as Lynx Wildcat by AgustaWestland on April 24th, 2009. The British military will accept the Lynx Wildcat under the formal designation of AW159. First flight of the initial Wildcat was recorded on November 12th, 2009 out of Yeovil with a second prototype going airborne on October 14th, 2010. Deliveries of Wildcat systems to the British military are expected to begin sometime in 2011.

The initial Lynx helicopter first flew on March 21st, 1971 and was introduced some time later in 1978 and, even today, remains an active component of British Army and Navy operations. The Lynx was also purchased by the French and German navies. Since its inception, the Lynx has maintained a capable and prominent role on the battlefield, being utilized for its multi-role nature and effective service under a variety of conditions including operations over water. She proved versatile enough to be outfitted with an array of munitions options to tackle a variety of sortie needs.

Lynx Wildcat origins date back to 2002 which saw evaluation of a version of the Super Lynx 300 development. The Super Lynx sported BERP rotor blades, a tail rotor taken from the Westland 30 series, new engines and several nose-mounted radar and optical installation options. Royal Navy Lynx HAS.3 models were upgraded to the Super Lynx standard under Lynx HMA.8 while a Super Lynx 200 (LHTEC CTS800 engines) and a Super Lynx 300 (EH101 cockpit and avionics) were offered for export.

The new Lynx initiative was christened with the developmental name of "Future Lynx" and intended as a replacement for the aging fleet of base Lynx helicopters in British Army and Navy service. The requirements were specified under the Surface Combatant Maritime Rotorcraft (SCMR) and the Battlefield Light Utility Helicopter (BLUH) programs. The programs eventually evolved under a single acronym known as "BRH" for a "Battlefield Reconnaissance Helicopter". On June 22nd, 2006, the MoD gave AgustaWestland the green light with a 1 billion pound agreement and committed to procuring some 70 Future Lynxes for both service branches. However, in December of 2008, the MoD reduced their requirement to 62 examples.
Advertisements

Beginning in 2014, the British Army is set to receive delivery of 34 Wildcats while the Royal Navy will accept 28 examples the year following. The initial Wildcat squadron for the Royal Navy has already been established as 700W NAS (Naval Air Squadron) in May of 2009, a group with history dating as far back as 1940. Its first helicopters are expected to arrive in January of 2013 to begin evaluations and conversion training for pilots and crew.

Power to the AW159 will be supplied by a pair of LHTEC CTS800-4N series turboshaft engines, each rated at 1,362 shaft horsepower apiece and powering a four-bladed main rotor with a portside-mounted tail rotor system. Maximum speed is listed at 184 miles per hour with an operational range equal to 598 miles, up to 4.5 hours of flight time with optional fuel stores. Wildcat measures in at 50 feet in length with a rotor diameter of 42 feet and a height of 12.2 feet. Maximum take-off weight is 13,200lbs. The airframe for both the Army and Navy models will be based on the navalized Royal Navy Lynx. Externally, she will appear quite similar to her original Lynx sisters, sporting a wheeled undercarriage, large front windscreens and side sliding doors.

Armament for the Wildcat will be expectedly varied based on need. General armament will consist of self-defensive machine guns mounted on pintles at the doors (0.30 or 0.50 caliber in origin). Machine gun pods and rocket pods also figure into the ordnance load as do air-to-surface guided missile systems such as the "Hellfire" anti-tank. For anti-ship duty, the Wildcat is expected to field depth charges, anti-ship missiles and torpedoes. Armament will be carried across a pair of wing stubs fitted to the sides of the Wildcat fuselage. The integrated armament suite is developed to autonomously detect and engage land- or -sea-based targets including those underwater.

The Wildcat will allow for the use of modular armor fittings to further enhance survivability as well as offer "crash-resistant" seating for the crew. For search and rescue sorties, the Wildcat will be fitted with a rescue hoist and be designed to accept wounded on MEDEVAC litters in the cabin. Additionally, as a troop transport, the Wildcat will supply multiple seat in the cabin for combat-ready troops. For urban and forested deployments, the cabin can be fixed with a rappelling kit for quick insertion.

March 2014 - The British Army has plans to field some 34 Lynx Wildcats with an additional 28 being delivered to the British Royal Navy. South Korea has ordered eight Lynx Wildcat helicopters with deliveries expected in 2015.

February 2017 - The South Korean Navy has elected to purchase the AW159 to fulfill the first half of its standing maritime service requirement.

October 2017 - The AW159 is a contender for the new Anti-Submarine Warfare (ASW) requirement of South Korea. Other contenders are the Airbus Helicopters NH90 and Sikorsky MH-60R series.

March 2020 - British Royal Navy Wildcats are being outfitted with special weapons wings to extensively broaden their ordnance-carrying capabilities. This will allow the anti-surface ship platform to carry no fewer than four "Sea Venom" anti-ship missiles.

October 2020 - Leonardo has successfully tested its "Manned-UnManned - Teaming" (MUM-T) system aboard a specially-modified AW159 Wildcat helicopter. Development is being conducted ahead of trials for the British Army's "Warfighting Experiment".

Values are derrived from a variety of categories related to the design, overall function, and historical influence of this aircraft in aviation history.
Overall Rating
The overall rating takes into account over 60 individual factors related to this aircraft entry.
88
Rating is out of a possible 100 points.
Relative Maximum Speed
Hi: 200mph
Lo: 100mph
This entry's maximum listed speed (184mph).