The Curtiss P-40 Warhawk fighter was used to good effect by Allied pilots during the early stages of World War 2.

Authored By: Staff Writer | Last Edited: 04/01/2021 | Content ©www.MilitaryFactory.com | The following text is exclusive to this site. 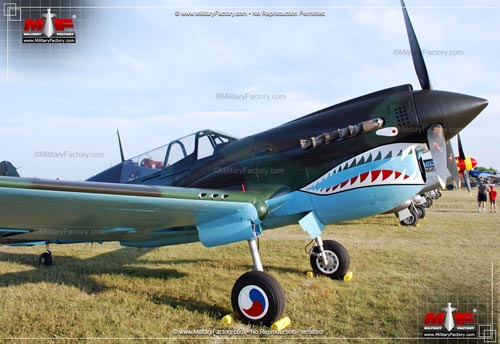 The Curtiss P-40 "Warhawk" series of fighter aircraft was a further development of the Curtiss P-36 "Hawk" line (detailed elsewhere on this site). The Warhawk became a legendary aircraft of the famous American Volunteer Group (AVG) fighting in China against the Japanese, earning themselves the nickname of "The Flying Tigers". Over the course of the war, the P-40 would be generally replaced by incoming improved types but she nonetheless remained one of the more important Allied fighters early in the World War 2 - used by the desperate Americans, British and Soviets alike. It was a pair of P-40s, piloted by American airmen George Welch and Ken Taylor, who were able to get airborne during the December 7th, 1941 Japanese attack on Pearl Harbor while Soviet pilots Nikolai Fyodorovich Kuznetsov, Petr Pokryshev and Stephan Novichkov all became aces flying their Lend-Lease P-40s. The P-40 was a good. solid gunnery platform for its time, limited to an extent by production numbers and demand of the wartime economy. Eventually technological developments found in incoming fighter lines like the Grumman F6F Hellcat and Vought F4U Corsair pushed the P-40 past its usefulness and strengths.

Some 13,738 P-40s were produced from 1939 into 1944. Operators included Australia, Brazil, Canada, China (Taiwan), Egypt, Finland, France, Indonesia, the Netherlands, New Zealand, Poland, South Africa, the Soviet Union, Turkey, the United Kingdom and the United States. Some fell to Imperial Japanese forces and were reconstituted to fight for their new owners.

Not an overly exceptional aircraft in any one category, the P-40 Warhawk could be a deadly fighting machine in trained hands. She fielded a formidable armament of 4 x 0.50 caliber Browning M2 heavy machine guns (with up to 200 to 235 rounds per gun) in her nose and wings. This would later be complemented by the airframe's ability to carry a modest bombload in an attempt to increase the workhorse's workload in war. Warhawks were fitted with a liquid-cooled in-line piston engine at the head of their design, a departure from the more popular air-cooled radials seen in many fighter types of the period (including the P-36 Hawk). The engine consisted of an Allison V12 providing over 1,000 horsepower.

Though the French Air Force had placed orders for the P-40 at the outset of the war, the eventual Fall of France forced the order to be diverted to Britain where it was promptly redesignated as the "Tomahawk". British versions installed the readily-available .303 machine gun in place of the 0.50 caliber types. Some Tomahawk models would eventually end up in the hands of the American Volunteer Group in China which, in turn, offered up an increasing amount of aerial victories against marauding Japanese fighters and bombers. Initial P-40 models included te P-40B and P-40C as well as the Tomahawk I, Tomahawk IIA and Tomahawk IIB. These served from 1941 into 1943 and primarily over North Africa, China/Burma/India, the Philippines and Pearl Harbor. Soviet units operated over the East Front as well as over Finland during the "Continuation War". P-40B models introduced some cockpit and fuel tank armoring while the C-model had an all-armored fuel system which reduced its speed.
Advertisements

Further improvements to the P-40 line produced the "D" model which raised performance specifications of the Allison piston engine. By this time, armament had increased to 6 x 12.7mm machine guns and the addition of an optional undercarriage bomb rack that allowed for the provision of a single 500lb bomb adding to the versatility of the aircraft. The engine cowling was revised some. On top of the diverted French Warhawks/Tomahawks, the British also ordered their own P-40D models and assigned the name of "Kittyhawk" to these. The notable follow-up marks, therefore, included the P-40D, P-40E, Kittyhawk Mk 1 and Kittyhawk Mk Ia. These served from 1942 into 1943 and fought over New Guinea, Guadalcanal, Kokoda, Milne Bay, Darwin, North Africa and over China.

From 1942 to 1942, the P-40K, P-40M and Kittyhawk Mk III all made their appearance in the war. The K-model had a revised, larger-area tail fin while M-models saw lengthened tail units altogether. These served over Guadalcanal, Kokoda, Milne Bay and Darwin.

The P-40F, P-40L, Kittyhawk Mk II and Kittyhawk Mk IIa introduced the Packard-Merlin engine and lost their top-mounted engine intakes. Armament varied some across the new marks and some featured lengthened fuselages. These airframes operated over North Africa, the Mediterranean Sea and across the Pacific Theater during 1943 with American and Free French air forces.

The P-40N, Kittyhawk Mk IV and Warhawk lines appeared from 1943 to 1944 over the Mediterranean and South West Pacific theaters of war. These featured a revised rear cockpit section promising improved situational awareness. A lengthened fuselage promoted more internal volume as well as stability. Some versions lacked the wing guns to save weight.

By this in the war, the Warhawk line was increasingly out-classed by newer generation enemy fighters. Regardless, the Warhawk - in all its varied forms, continued to find success wherever it was fielded up to the closing weeks of the conflict, solidifying her place as one of the classic American fighters of World War 2.
Advertisements

OPTIONAL (Model Dependent):
Up to 2,000lb of external ordnance (conventional drop bombs) across three hardpoints (one underfuselage and two underwing). 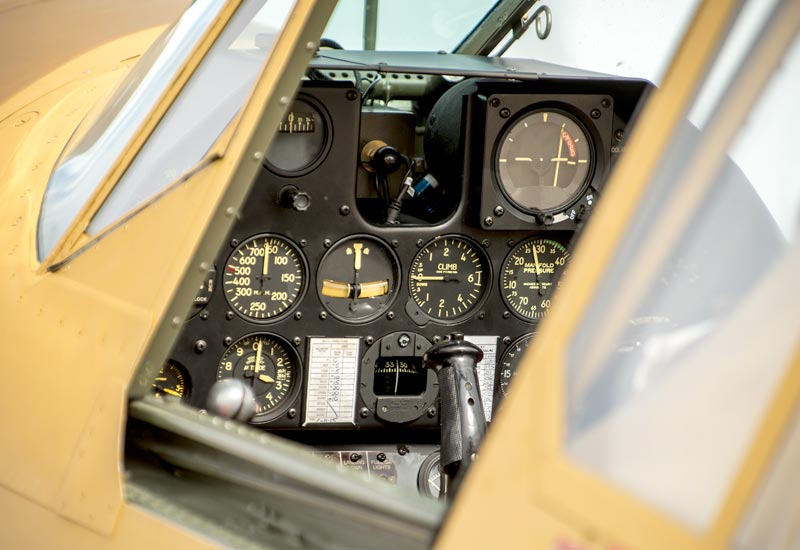 General Assessment
Firepower
Performance
Survivability
Versatility
Impact
Values are derrived from a variety of categories related to the design, overall function, and historical influence of this aircraft in aviation history.
Overall Rating
The overall rating takes into account over 60 individual factors related to this aircraft entry.
78
Rating is out of a possible 100 points.
Relative Maximum Speed
Hi: 400mph
Lo: 200mph
This entry's maximum listed speed (378mph). 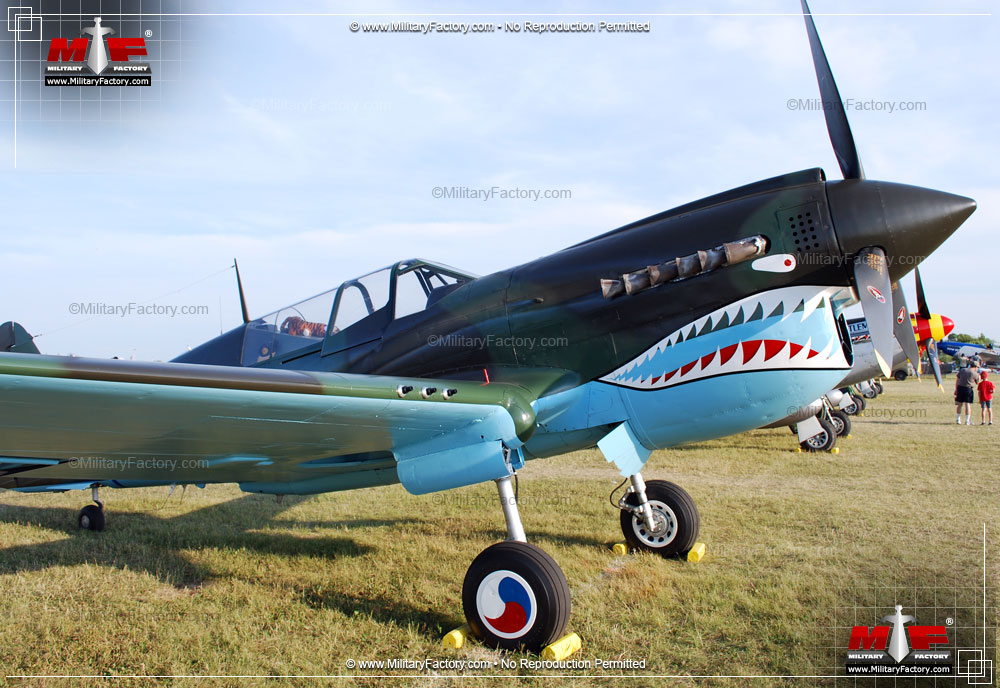 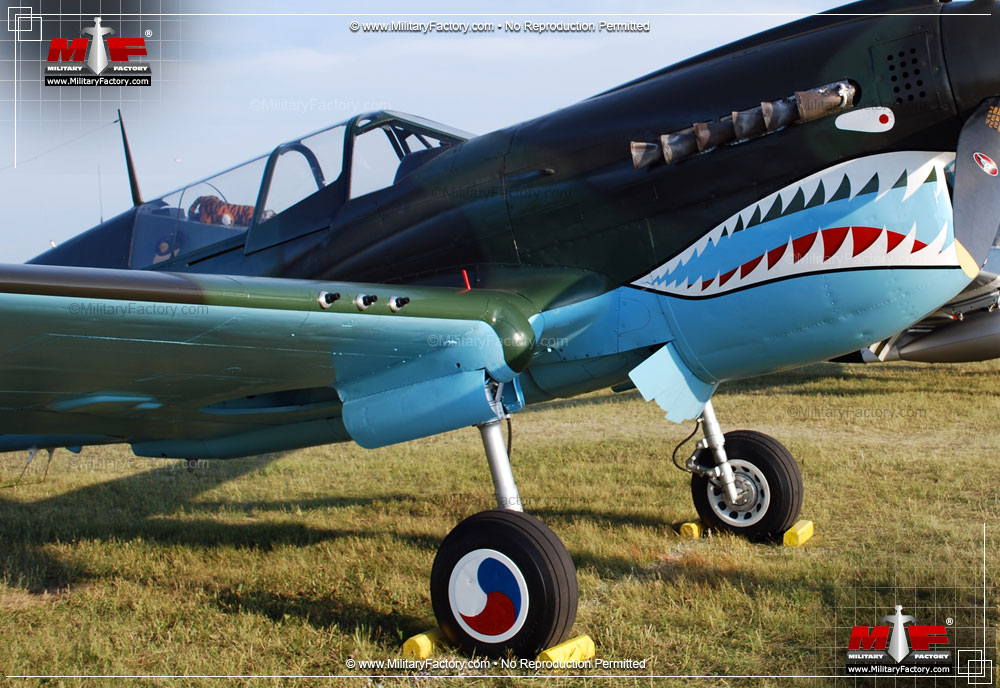 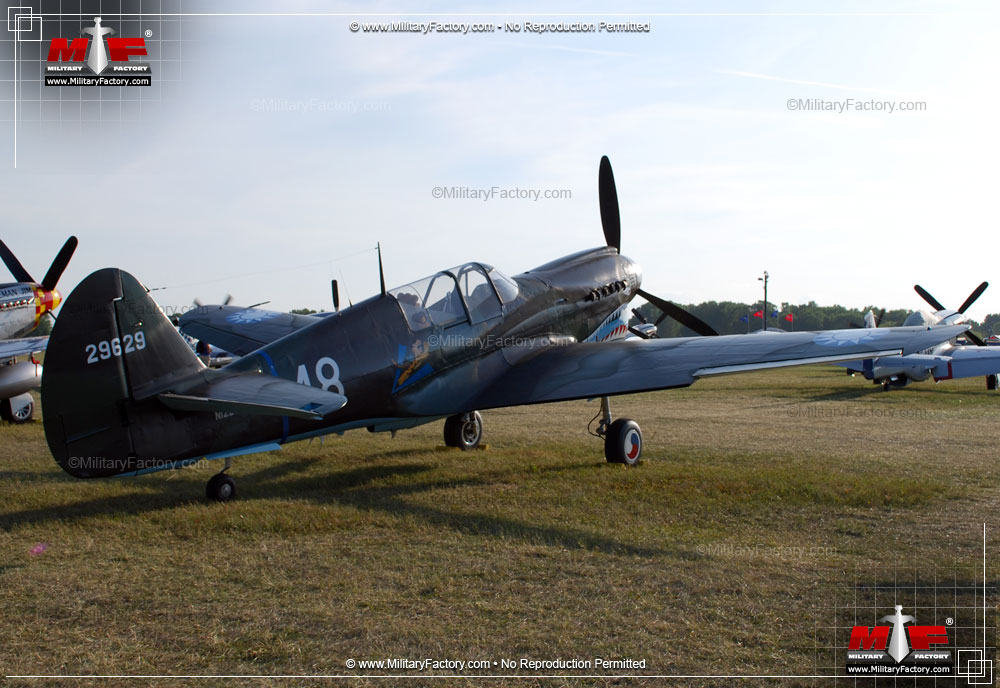 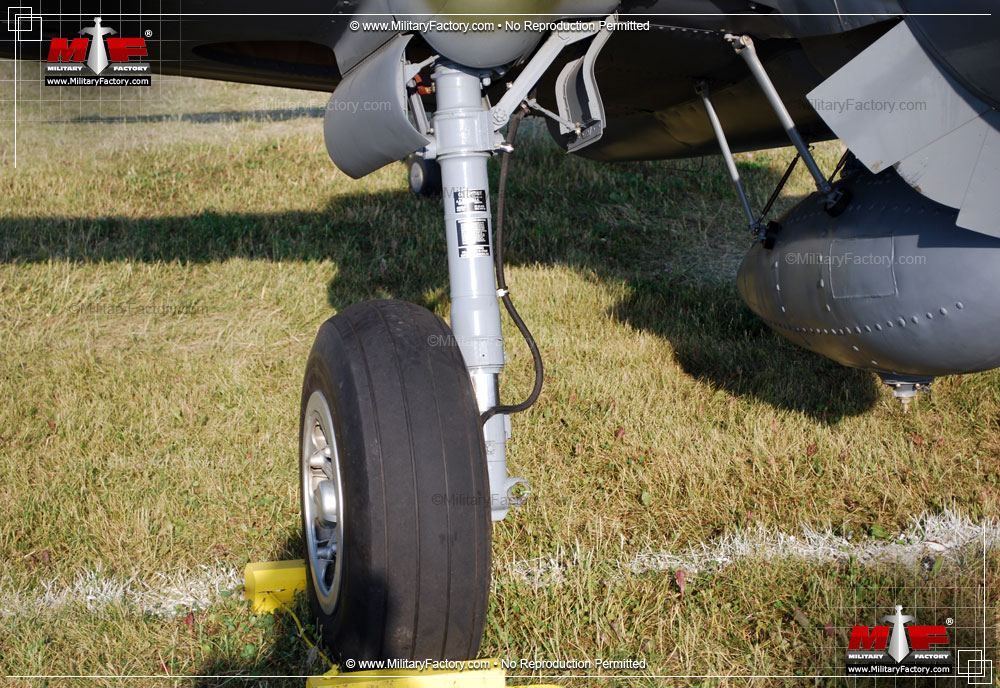 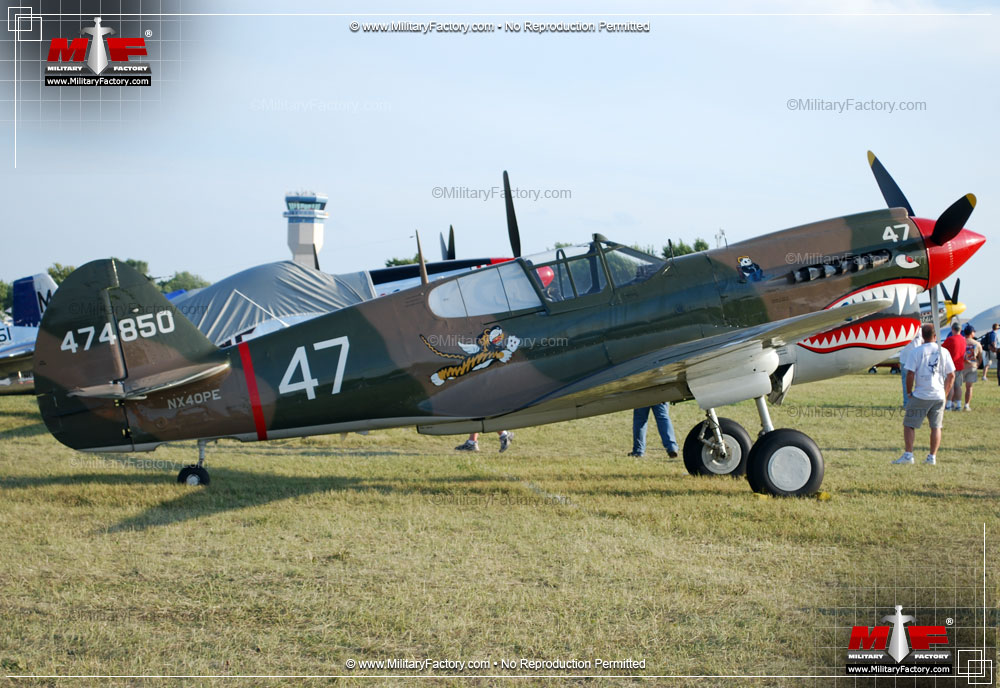 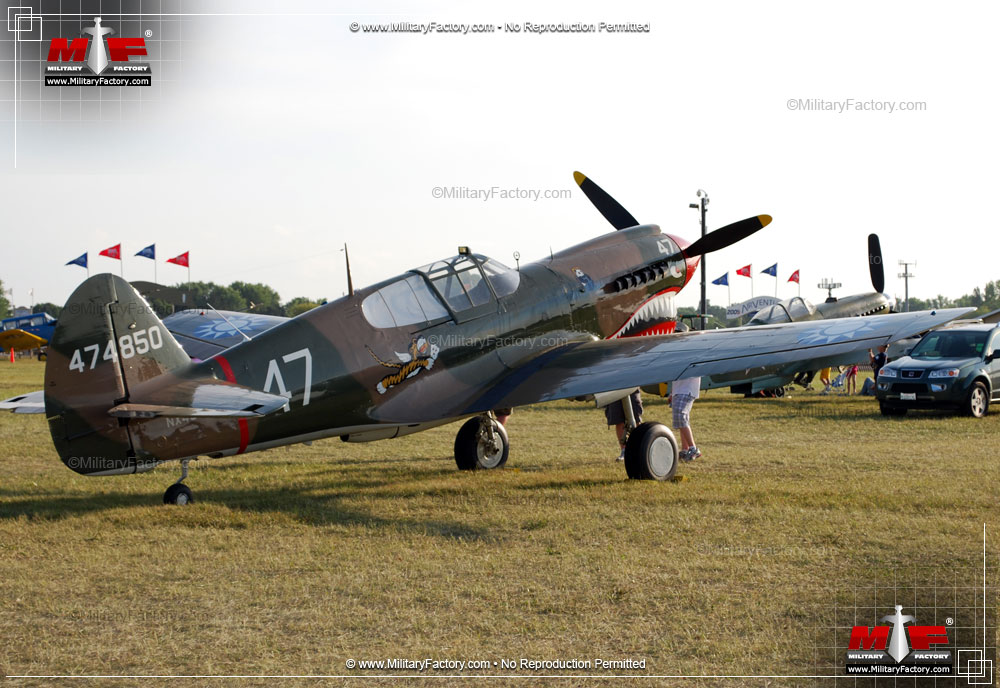 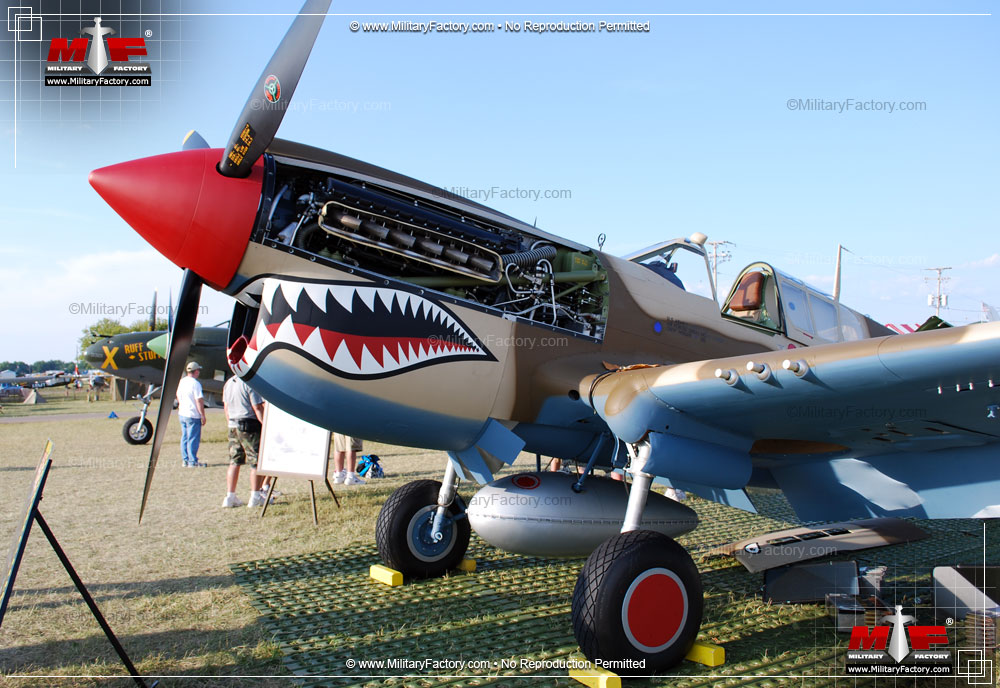 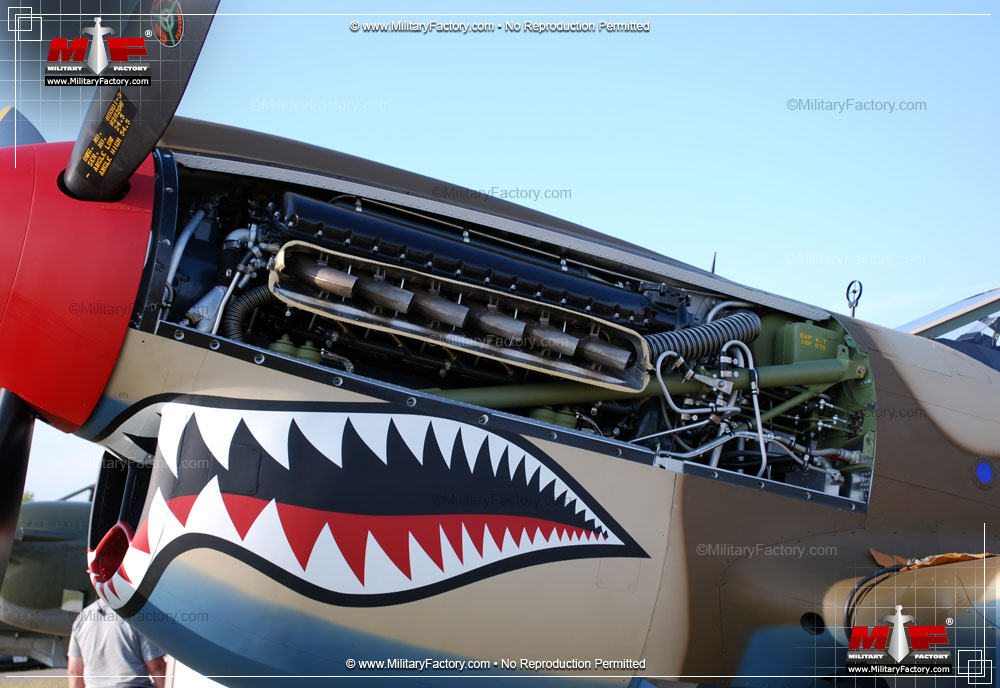 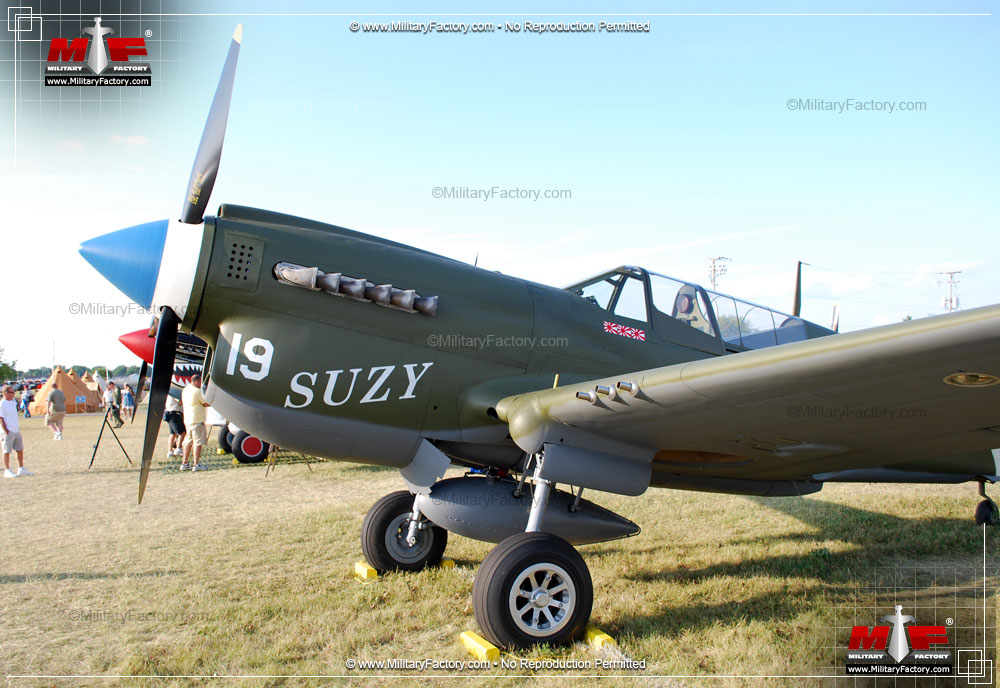 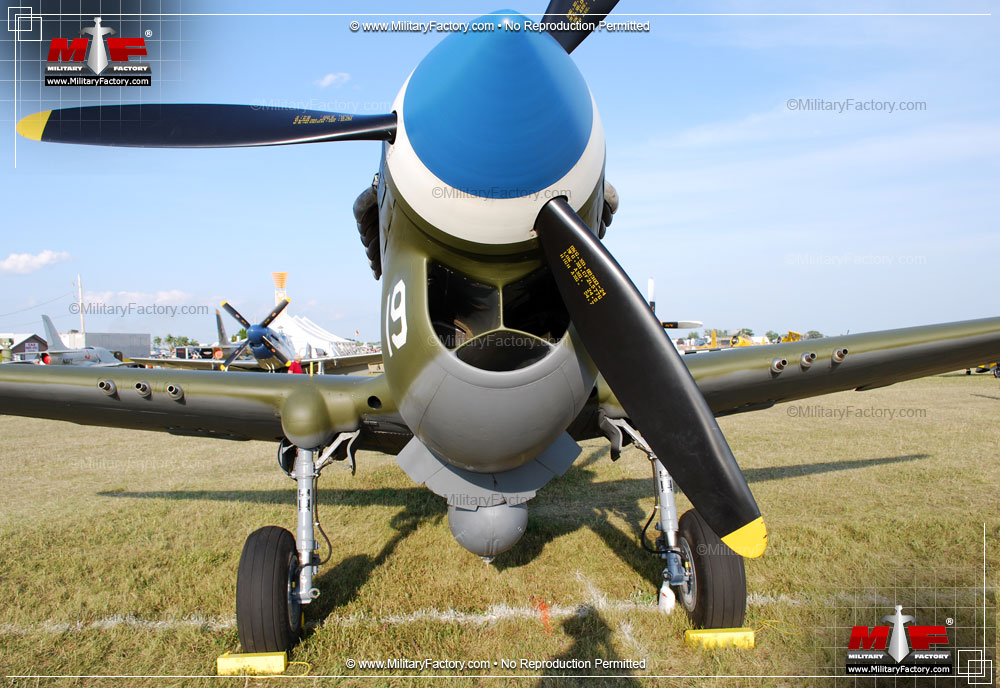 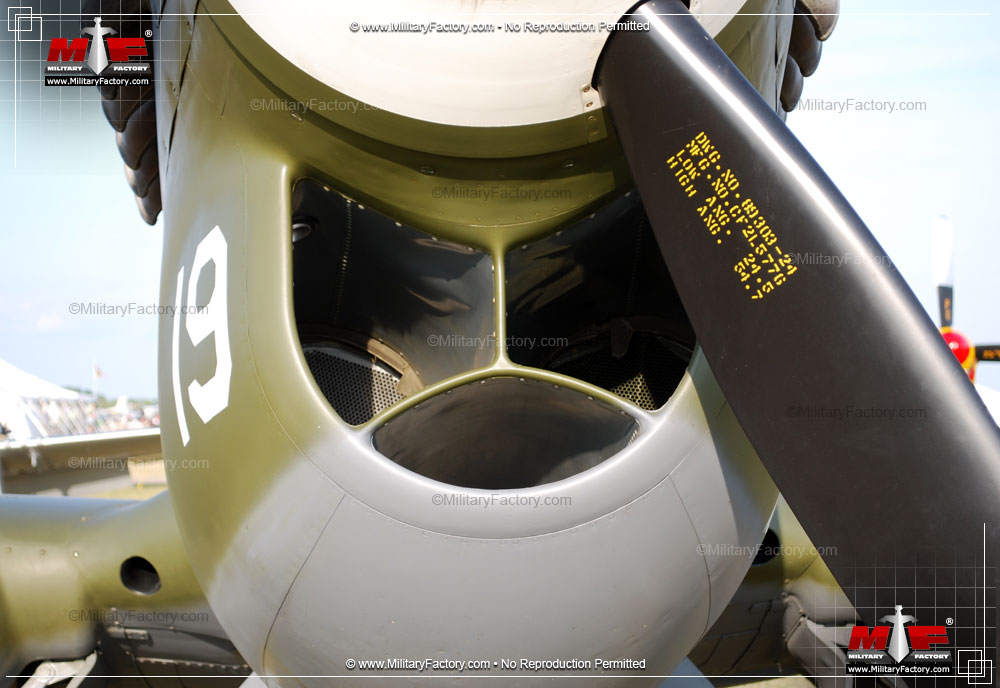 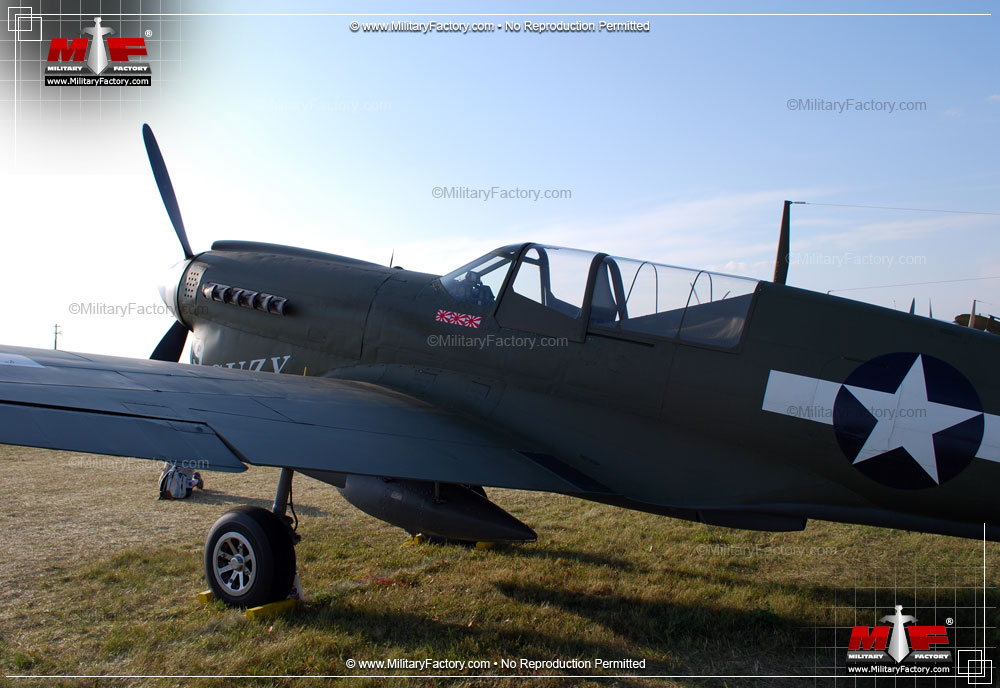 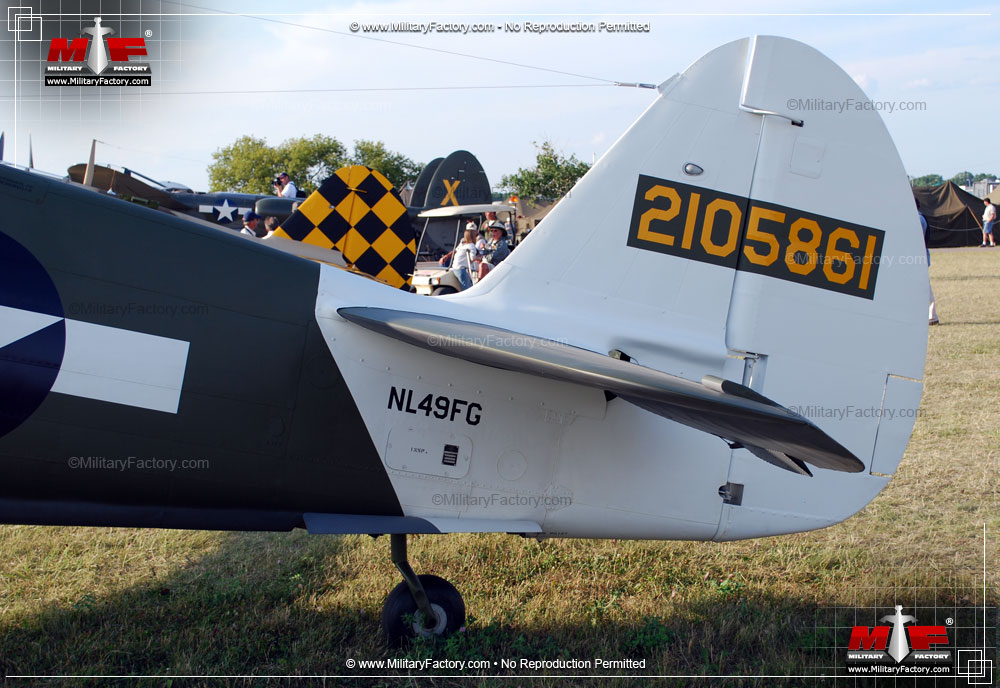 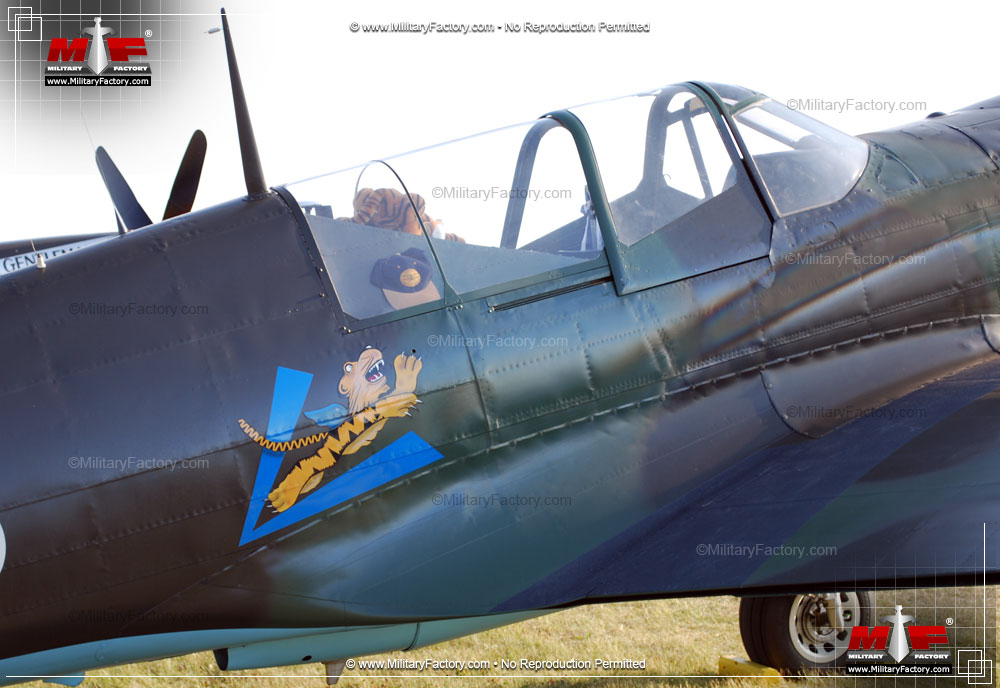 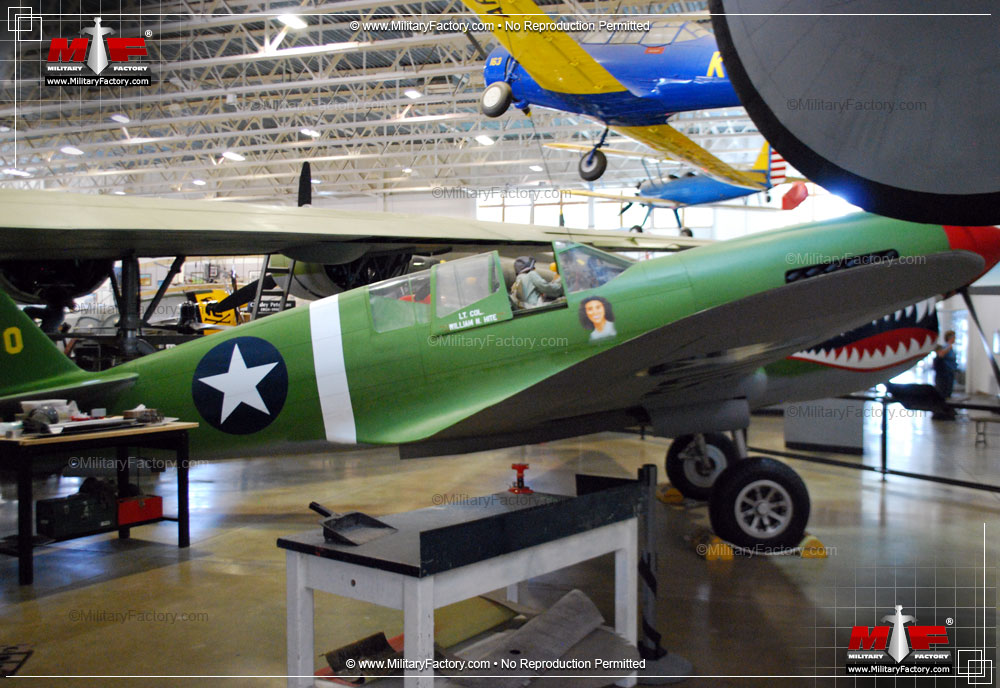 Aviation developments of similar form and function, or related to, the Curtiss P-40 Warhawk...