The Seversky P-35 became the USAACs first all-metal fighter and saw combat action against Japan in the early years of World War 2.

Authored By: Dan Alex | Last Edited: 10/31/2020 | Content ©www.MilitaryFactory.com | The following text is exclusive to this site. 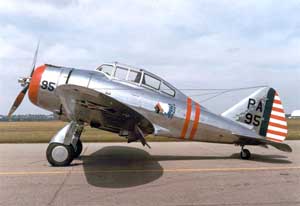 Upon its adoption in 1937, the portly Seversky P-35 pursuit aircraft became the United States Army Air Corp's (USAAC) first modern single-seat fighter by showcasing an enclosed cockpit, all-metal construction, and a retractable undercarriage. Its arrival was a highly publicized event in America, detailing the type as the fighter that was to earn the United States military aerial superiority over any foe of the time. In reality, however, the type was limited by its performance as well as its machine gun armament - these key limitations unveiled honestly (and brutally) in the early fighting of World War 2 (1939-1945).

Design of the P-35 was attributed to Russian Alexander P. Seversky. Born into wealth, Seversky enlisted with the Russian Air Service during World War 1 (1914-1918). On his first sortie, his two-seat aircraft was shot down by ground-based fire. In the ensuing crash landing, an undetonated bomb exploded and killed his crewmate while Seversky was to lose his own leg in the process. Undeterred and having recovered from his near-death experience, Seversky was granted use of a prosthetic and given command of an aircraft again - such was his dogged determination. Becoming a high-scoring ace for the Russians for their part in the conflict, he was then sent by the government to the United States to help secure surplus war goods. His future changed when the Communist revolution overtook his home country which tumbled the Empire into a complete civil war. Seversky then decided his fortunes would be better served as a citizen of the United States. Having made high-level connections during his stay, he joined forces with General Billy Mitchell who had been working on both the Army and Navy authorities to adopt more modern doctrine with regards to air superiority. Seversky's circle of friends soon grew and he himself attained the rank of Major in the Army Air Corps Reserve during 1926.

Aeronautics were a true passion and, in 1931, Seversky used seed capital to rent a lone hangar from a Long Island-based New York aviation company (Edo). His staff grew to include Alexander Kartveli, the soon-to-be designer of the classic World War 2-era P-47 "Thunderbolt" fighter. A combined effort then produced an all-metal, three-seat "SEV-3" amphibious record-setter in 1933. The U.S. Army's BT-8 trainers were an evolved form of this aircraft, beginning Seversky's involvement with such sales to the USAAC.

A period of trial and error then greeted the engineering team and the evolutionary process of what would become the P-35. Prototypes were modified accordingly and Seversky eyed his developments as the successor to the outgoing Boeing P-26 "Peashooter" monoplane that the Army currently held in stock. However, the competing firm of Curtiss was also working on their "Model 75" for the same potentially lucrative contract. After a fly-off between the two designs, the Seversky SEV-7 prototype was selected ahead of the Curtiss submission and an Army contract handed to Seversky on June 16th, 1936. The order was for 77 of the type under the pursuit fighter designation of "P-35". A testing prototype with (though with reduced performance) was made available to Army officials in July of 1937. Beyond the order from the U.S. Army was an order from Sweden - though an October 1940 embargo led to the Army claiming some of this outgoing stock as the "P-35A" and these were promptly shipped to American forces in the Philippines. Swedish versions (the "J9") were equipped with 2 x 12.7mm heavy machine guns in the wings and 2 x 7.62mm machine guns in the engine cowl, synchronized to fire through the spinning propeller blades. Power was from a Pratt & Whitney R1830-45 radial piston engine of 1,050 horsepower.

Seversky then damaged his company's reputation with the American government (and public) when it delved into a dealing with the Empire of Japan for twenty SEV-2PA-83 fighters. Japan was at war with China and the aircraft were relegated to reconnaissance roles when their performance was lacking against existing Japanese types. Once made aware of the deal, American governmental authorities pressured the USAAC to restrict its future order of P-35s and instead concentrate on procuring the runner-up to the original fly-off - the Curtiss Model 75. Facing bankruptcy, the Seversky company drove the man Seversky himself out and restructured - giving rise to the "Republic Aviation Corporation".
Advertisements

Initial Army units received P-35s during May of 1937. In practice, its handling qualities were shown to be rather dangerous, spin- and stall-prone when pressed, and thusly a revision of the wings was ordered. However, the changes never fully ironed out the issue which stayed with the design throughout its whole short-lived career. By the time of its introduction, performance of the little machine had also fallen behind, making it an obsolete mount before it had ever fired a shot in anger. The USAAC was also procuring the Curtis Model 75s as the P-36 "Hawk" which began to appear in number from 1938 onwards and several units actually fielded both aircraft types at once. The P-36 was procured in 215 examples for local Army use and over 900 of the type built for export. Comparatively, only 196 P-35s were ever built - including any available export numbers. Exports customers (beyond Sweden and Japan) also went on to include Colombia, Ecuador, the Philippines, and the Soviet Union.

In general, P-35 pilots held no ill-will against their little P-35s though the aircraft was not particularly liked on the whole. Its limitations as a fighter mount proved the aircraft was nothing more than a touring performer of a by-gone era of flight. Performance was lacking against competing types -especially the new generation of Japanese fighters - and its mixed machine gun armament was not effective against said fighters or their bomber counterparts. The P-35 lacked the key qualities, even at the start of the war, to keep a good long existence in the conflict - the upcoming competing Curtiss P-40 "Warhawk" managed a much more memorable existence.

To add insult to injury, those P-35As sent to the Philippines from the Swedish order did not fare well against Japanese fighters of similar mission scope and function. Additionally, these aircraft were delivered with assembly instructions and flight manuals as well as instrument panels completed in their original Swedish text and symbology. A total of forty-eight of these P-35A aircraft made up the Philippine defense and, by the time of the Japanese invasion, the P-35s were wholly inadequate and largely obsolete fighting machines in the grand scope of World War 2. P-35s were eventually succeeded by the aforementioned P-40 "Warhawks" along the frontier when possible.

When their combat usefulness had ended, P-35s were used to ferry evacuating Army personnel to safe locations away from the Japanese lines. The aircraft held a spacious baggage compartment in their fuselage which aided in transporting several persons aloft. Stateside P-35s were relegated to training units, mechanic schools, or the scrap yard. Those "J9" aircraft that managed to be delivered to customer Sweden were not used in anger during the global conflict as the nation maintained its strict neutral status throughout the war. These did, however, live exceedingly longer service lives with their host country - the last remnants not retired until September of 1952.
Advertisements

Columbia; Ecuador; Japan; Philippines; Soviet Union; Sweden; United States
(OPERATORS list includes past, present, and future operators when applicable)
✓ Air-to-Air Combat, Fighter
General ability to actively engage other aircraft of similar form and function, typically through guns, missiles, and/or aerial rockets. ✓ Interception
Ability to intercept inbound aerial threats by way of high-performance, typically speed and rate-of-climb. ✓ Ground Attack (Bombing, Strafing)
Ability to conduct aerial bombing of ground targets by way of (but not limited to) guns, bombs, missiles, rockets, and the like. ✓ Training (General)
Developed ability to be used as a dedicated trainer for student pilots (typically under the supervision of an instructor).

General Assessment
Firepower
Performance
Survivability
Versatility
Impact
Values are derrived from a variety of categories related to the design, overall function, and historical influence of this aircraft in aviation history.
Overall Rating
The overall rating takes into account over 60 individual factors related to this aircraft entry.
32
Rating is out of a possible 100 points.
Relative Maximum Speed
Hi: 400mph
Lo: 200mph
This entry's maximum listed speed (308mph). 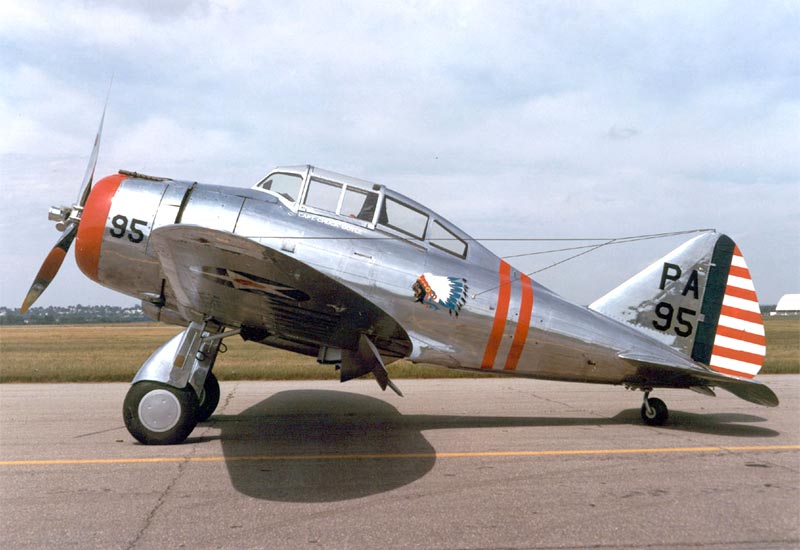 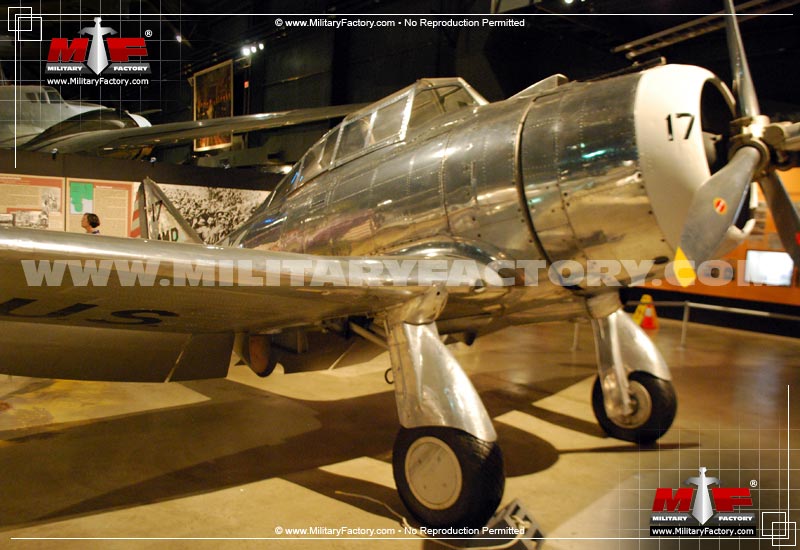 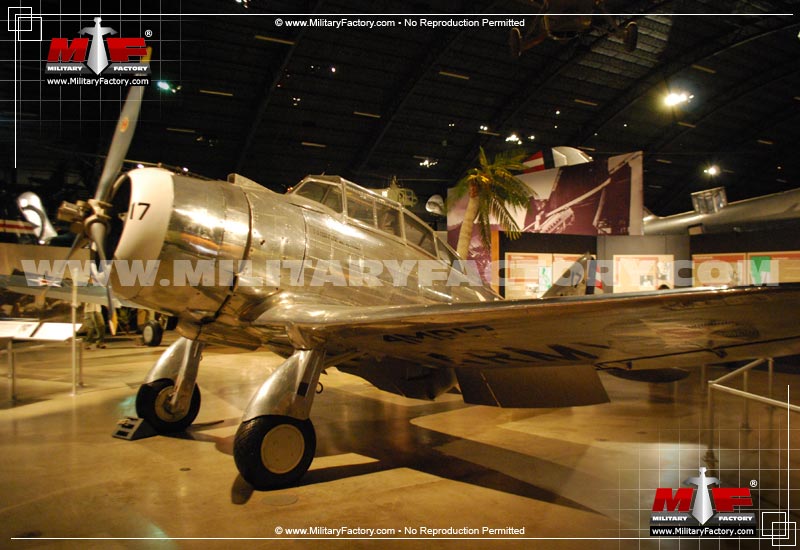 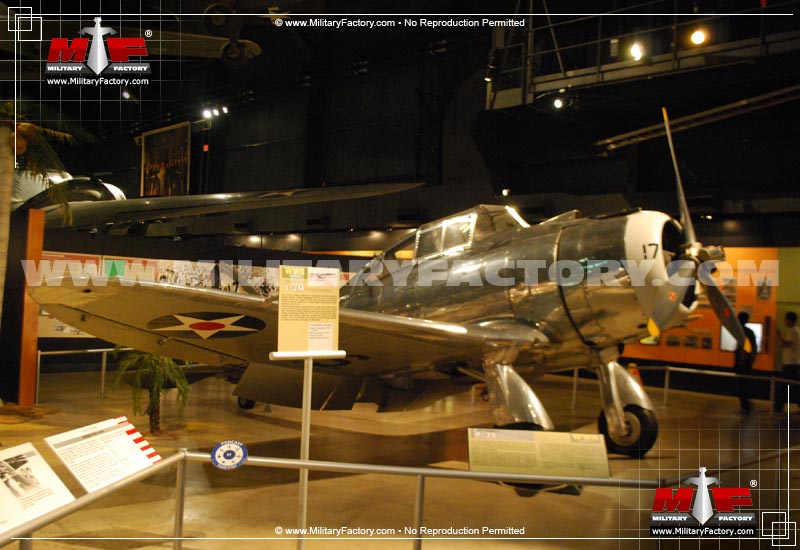 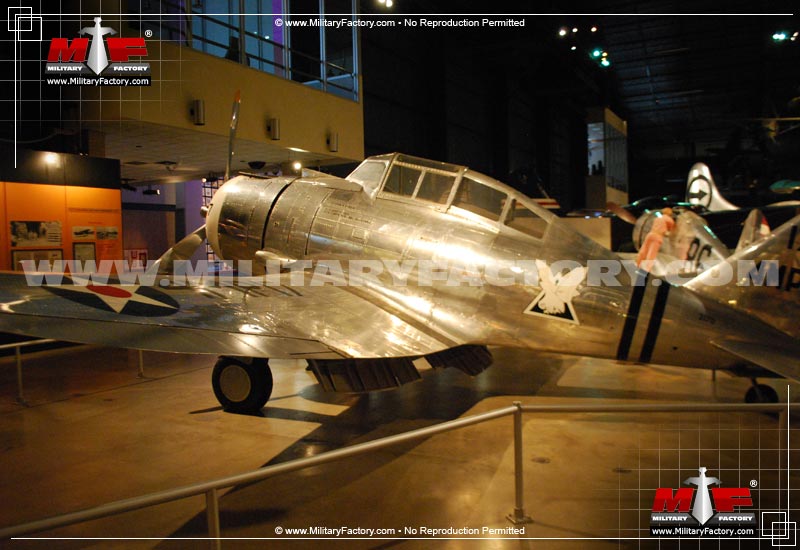 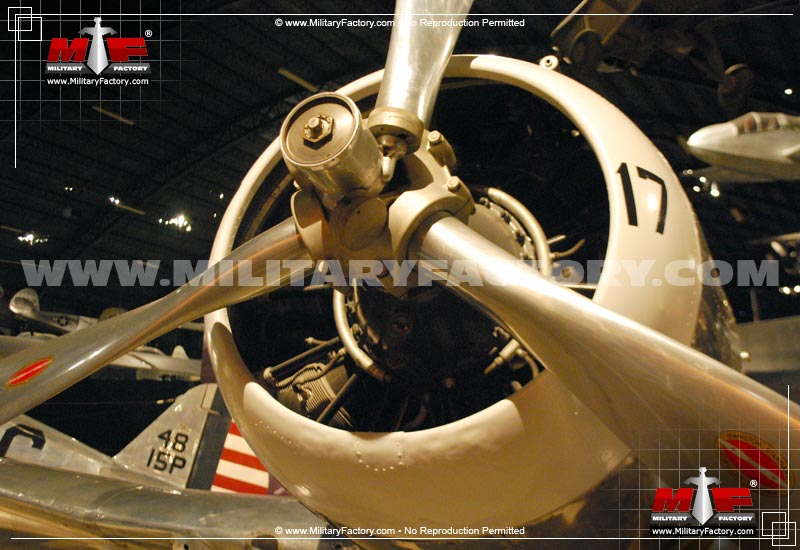 Aviation developments of similar form and function, or related to, the Seversky P-35...