Authored By: Staff Writer | Last Edited: 03/08/2020 | Content ©www.MilitaryFactory.com | The following text is exclusive to this site. 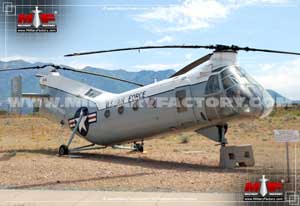 The Piasecki H-21 tandem-rotor helicopter was born from a line of Piasecki products that began with the HRP-1. The HRP-1 utilized a tandem-rotor arrangement and first flew in 1945 before eventually being adopted by the United States Navy, Marine Corps and the Coast Guard. Twenty-eight examples were completed with service beginning in 1947. With this framework came the H-21 in the late 1940s, developed along the lines of cold weather rescue service. The United States Air Force contracted for thirty-two of the type and knew it as the H-21 "Workhorse". Due to its unique shape, the H-21 - and its predecessors - were nicknamed the "Flying Banana". A first flight was had in April of 1952, its design attributed to Frank Piasecki himself.

The H-21 was based on the HRP-1 but incorporated more modern elements to its construction for a more robust end-product. The cockpit was heavily glazed for excellent vision by the crew and positioned at the extreme front end of the fuselage. The fuselage was pulled downward aft of midships, giving the cockpit a "nose up" appearance and driving the tail upwards as well - providing the H-21 its most unique look. At the lowest point of the fuselage were the fixed main landing gear legs (wheeled) while a wheeled leg was held under the nose. Each main rotor consisted of three-blade assemblies and the collapsed nature of the fuselage center ensured that the main rotor blades did not interact at any one point - reducing the chance of a fatal accident occurring. Their rotation was counter to reduce inherent torque and maximize control/stability. Vertical tail fins were situated outboard of the rear main rotor position. Internally, the H-21 was crewed by two in the cockpit and held space for up to 20 fully-laden combat troops or up to twelve medical litters with accompanying medical staff. Performance included a maximum speed over 130 miles per hour and a range out to 400 miles.

H-21A marked the early Search and Rescue (SAR) models for the USAF and these came fitted with a Curtis-Wright R-1820-103 "Cyclone" supercharged air-cooled radial engine of 1,150 horsepower. The mark numbered 32 in all and were followed by the "H-21B" which was developed into an assault transport through 163 examples. The engine was changed over to a Wright 103 model outputting at 1,425 horsepower for improved performance. Additionally, the main rotor blades saw an increase to their diameter as the blades were lengthened some six inches. The Royal Canadian Air Force (RCAF) soon joined the USAF in operation of the H-21 series (both A- and B-models).

In the early 1950s, the USMC shared interest in the H-21 and several H-21A models were used for evaluations. During 1957, an H-21B arrived and was used as a ship tug. The H-21C was a United States Army designation which carried the name of "Shawnee" and featured the Wright 103 engine. These were later redesignated under the "CH-21" model marker.

Production of H-21s spanned from 1952 until 1959 and their operational service ran into 1967. Beyond the United States and Canada, global operators included France, West Germany, Japan, and Sweden. New York Airways operated a civilian form as several models of the line were designed with passenger-hauling capabilities in mind. The French pressed their H-21C models into combat service during the Algerian War (1954-1962) in the gunship role armed with rockets and machine guns though this exposure was far from a complete success. Nevertheless the helicopter continued on in its given transport roles through to the end of the French commitment.

American H-21s were deployed during the Vietnam War (1955-1975) from December 1961 on and these were typically armed through trainable machine guns of 7.62mm and 12.7mm caliber for defensive purposes. However, their service in the conflict was relatively short-lived as the line was superseded in its over-battlefield roles by the new Bell UH-1 "Huey" and Boeing CH-47 "Chinook" series helicopters. The former excelled in the assault /gunship roles while the latter continued the tandem-rotor tradition and was cleared for heavy hauling. The war showcased several deficiencies in the H-21 design - slow performance and susceptibility to ground fire as well as below average hot weather operation. Their services in the war was greatly reduced from 1964 on.

A U.S. Army H-21C became the first American helicopter to cross the country non-stop on August 24th, 1954. In-flight refueling made this feat possible.

In 1959, Vertol Aircraft acquired the Piasecki concern, later becoming Boeing Vertol. A heavy-lift H-21 version was contemplated that featured conjoined H-21 airframes hauling very-heavy loads (the number of H-21s involved could vary based on cargo subject weight). This idea was not finalized into an in-service form.
Advertisements

(Showcased performance specifications pertain to the Piasecki CH-21C Workhorse production variant. Compare this aircraft entry against any other in our database or View aircraft by powerplant type)
OPTIONAL:
7.62mm or 12.7mm machine guns on fixed or trainable mountings; rockets fitted to some gunship models. 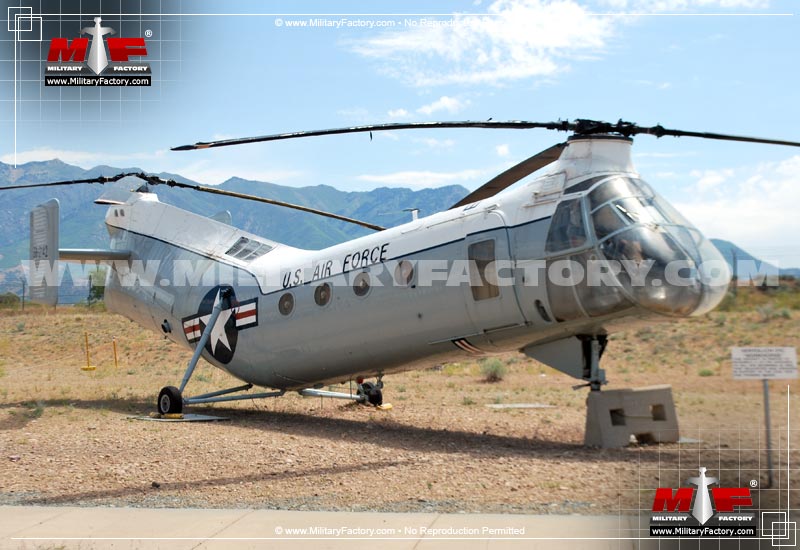 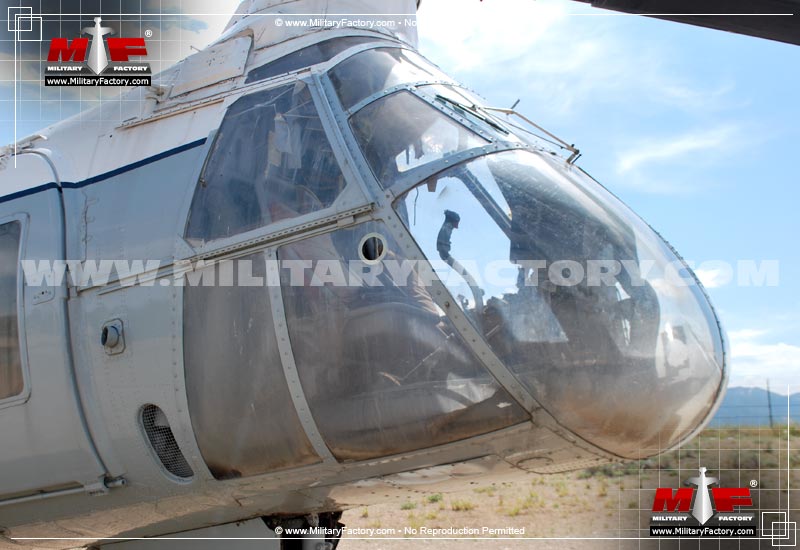 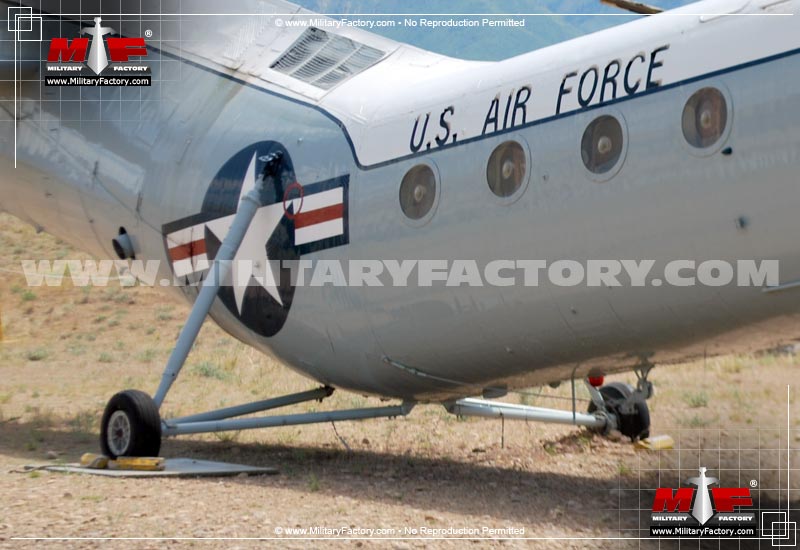 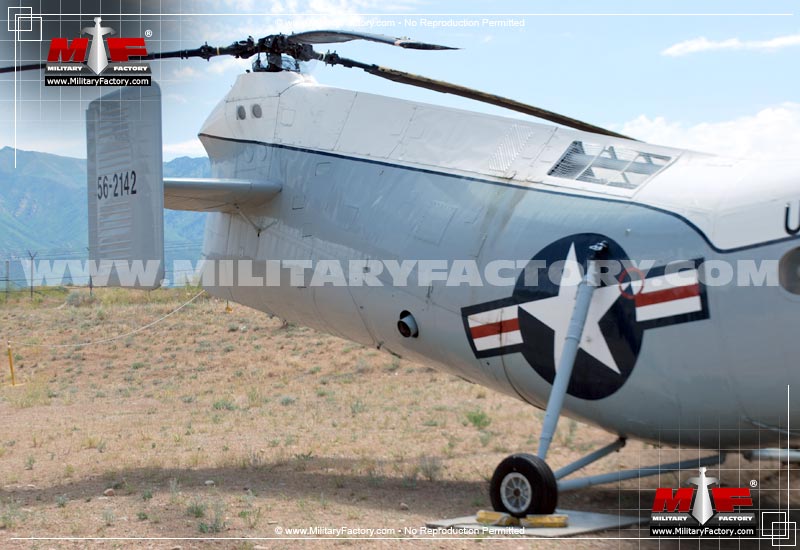 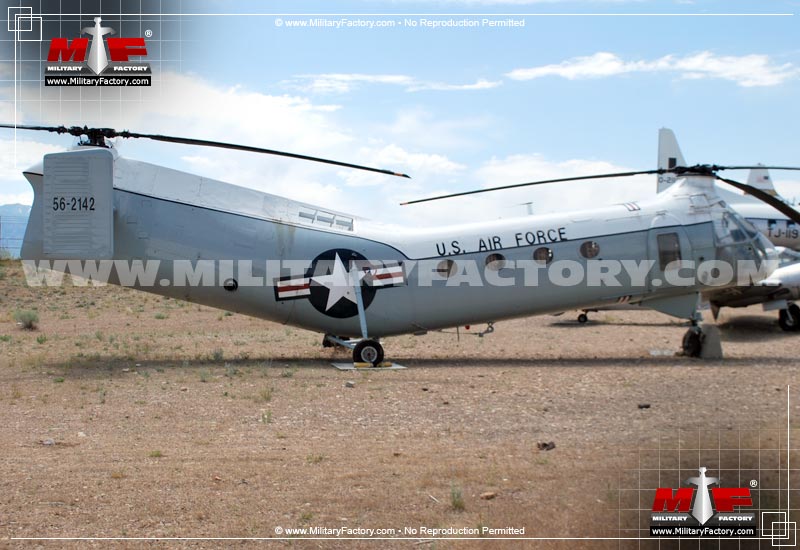 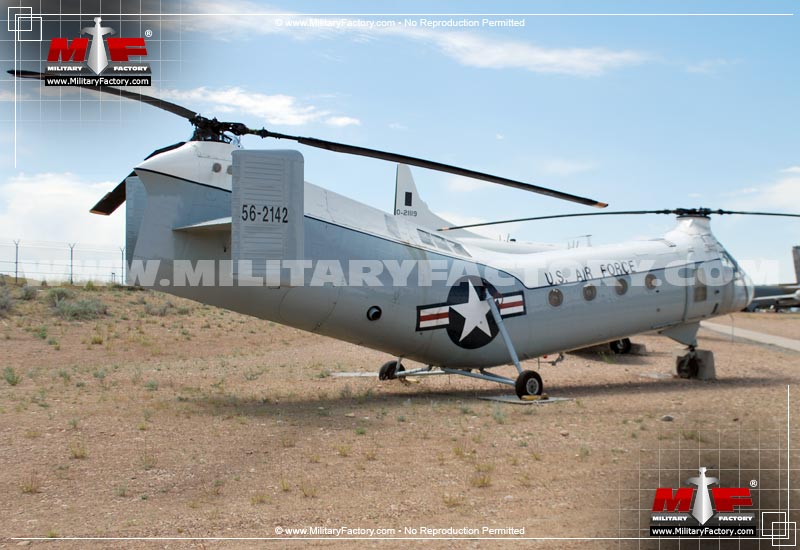 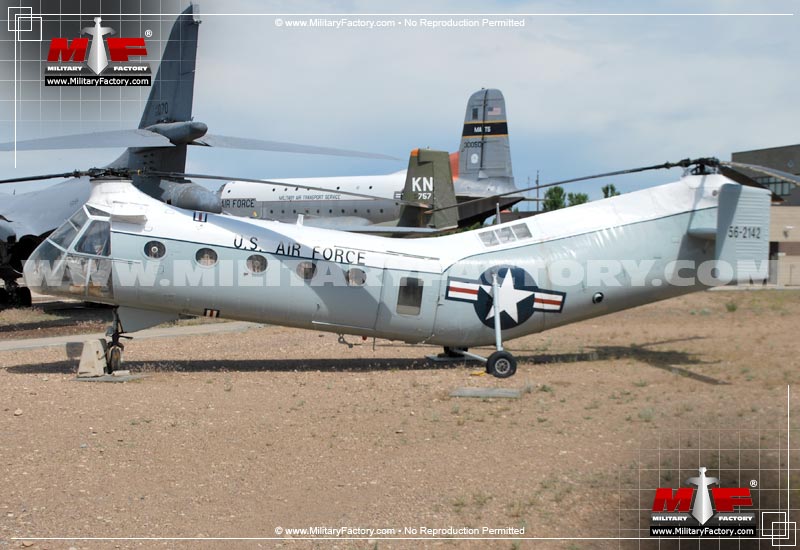 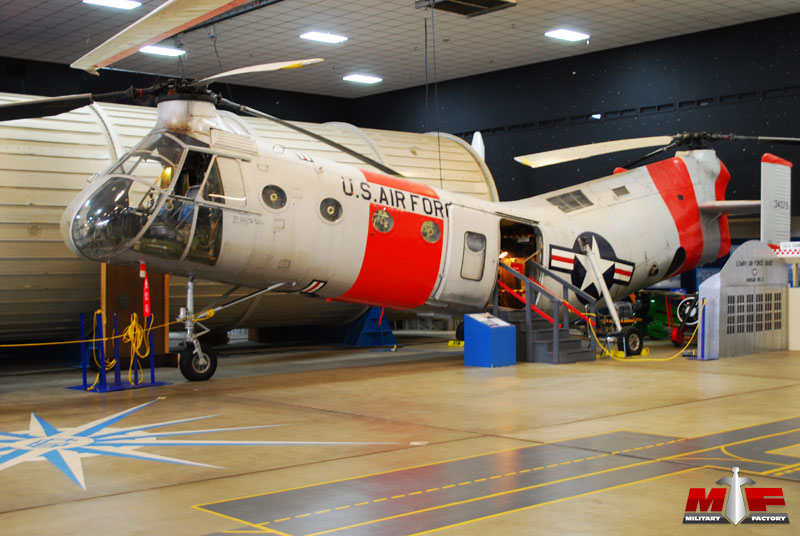 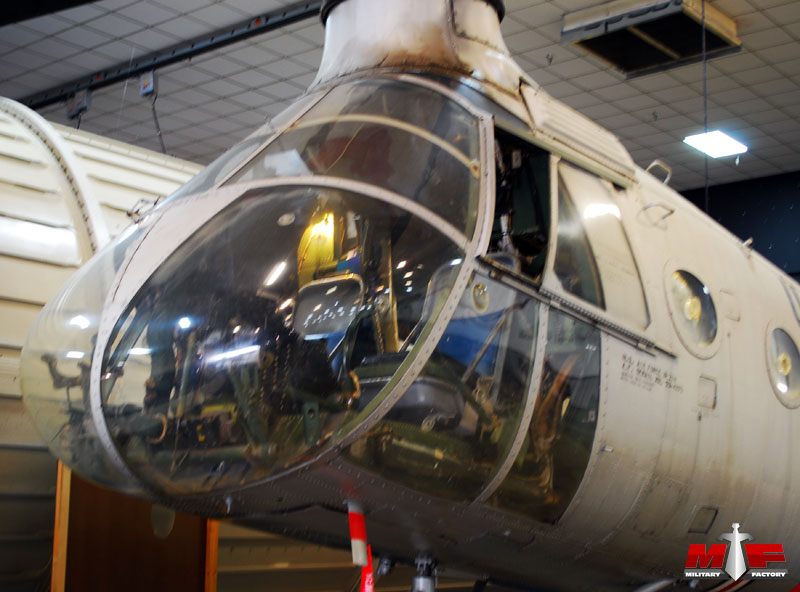 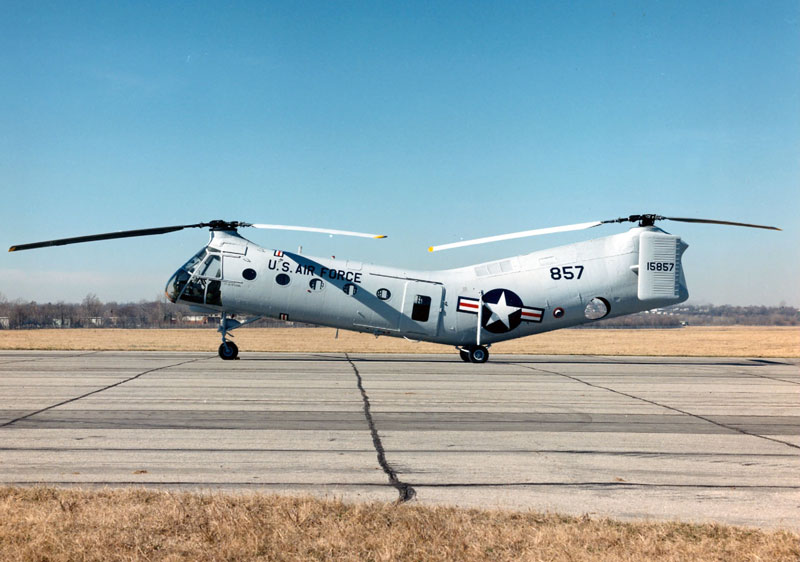 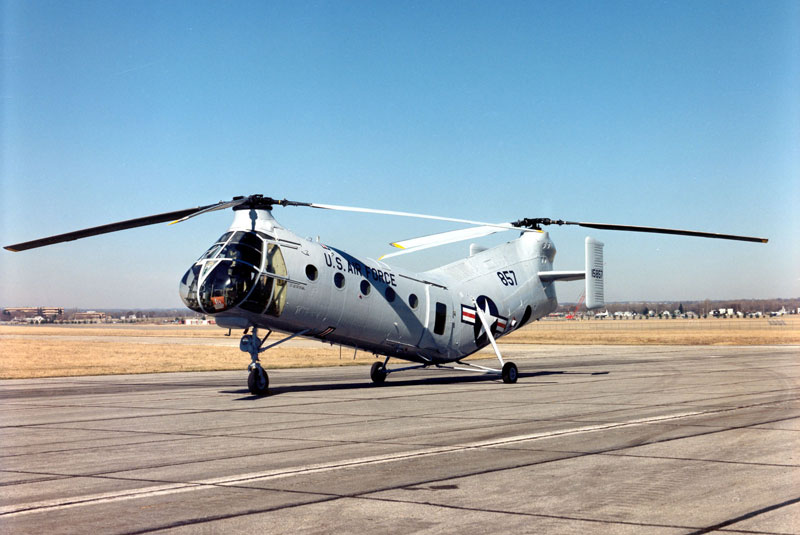 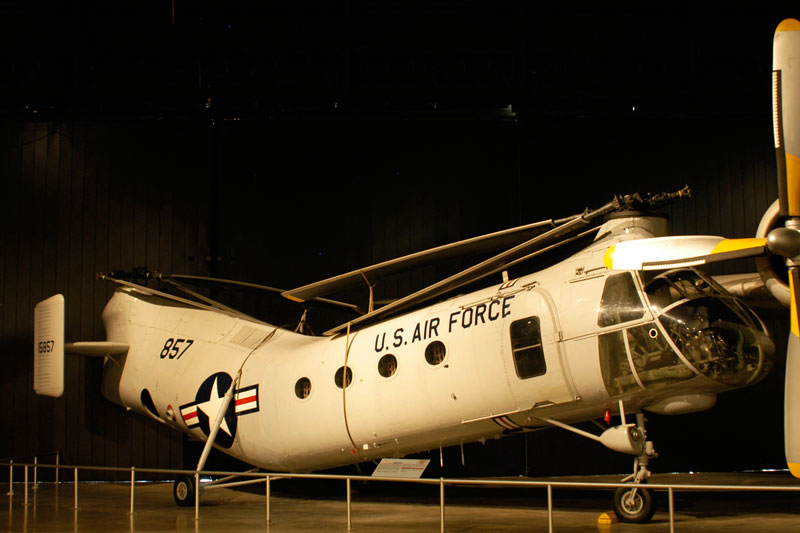 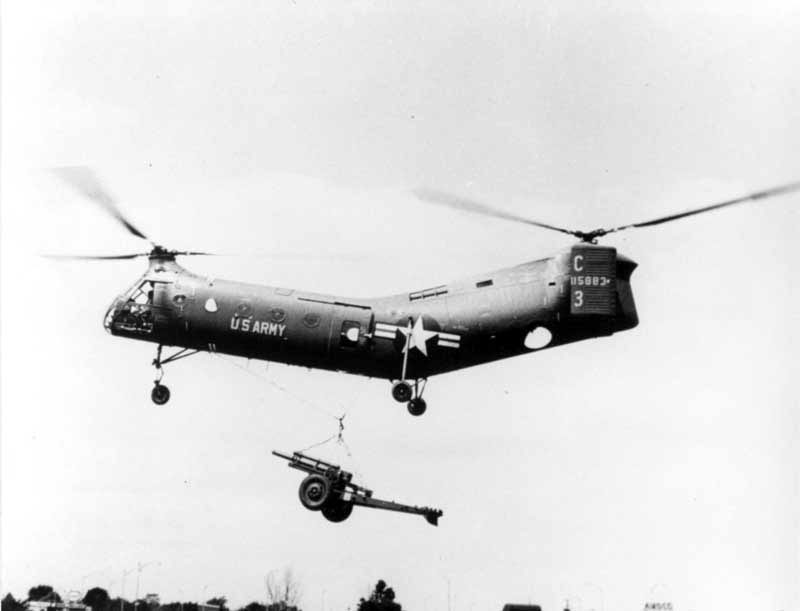 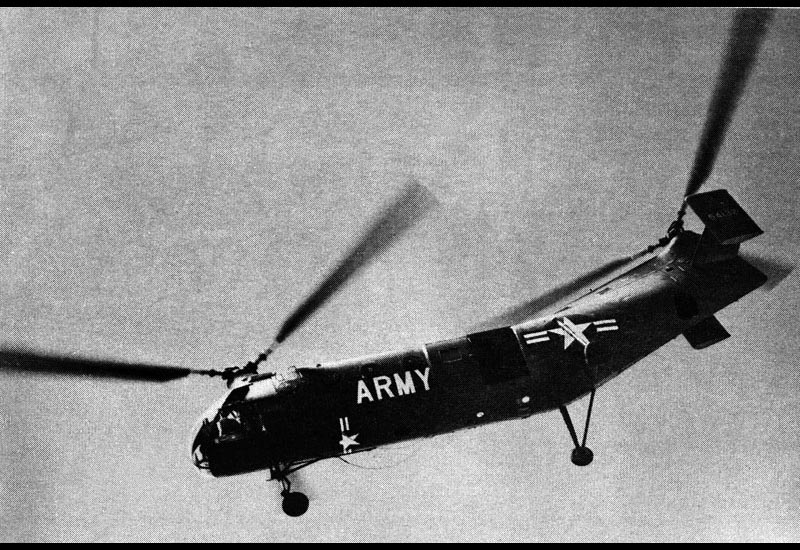