The General Dynamics F-111 Aardvark swing-wing bomber was retired in 1996 from active service with the United States Air Force followed shortly by its counterpart - the EF-111 Raven. 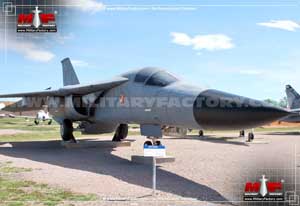 The General Dynamics F-111 "Aardvark" was purposely-designed as a variable geometry "swing wing" platform from the outset. The variable swing-wing philosophy would allow the aircraft to utilize three pre-determined geometric wing positions that could be called upon to change the flight characteristics of the aircraft "on the fly". The first position, with wings fully extended, was to be used when the increased weight of the aircraft - due to ordnance and/or fuel - could produce additional drag properties under the wing, assisting the aircraft on take-off. The secondary position could be utilized to attain stability and speed at high subsonic speeds. The third position, with wings completely swept back against the fuselage, could be utilized for maximum "fast-dash" performance at altitude.

The F-111 was based on this design principle, becoming the world's first operational variable geometry swing wing aircraft - leading the way for future global counterparts in the form of the Grumman F-14 Tomcat interceptor, the Panavia Tornado multirole aircraft, the Mikoyan-Gurevich MiG-23 and MiG-27 "Flogger" strike fighters and the Sukhoi Su-17 "Fitter" bombers. Additionally, larger (and more complex) forms of the swing-wing philosophy would also arise from the developments of the Rockwell B-1 "Lancer", the Tupolev Tu-22 "Backfire" and the Tupolev Tu-160 "Blackjack" bombers.

The F-111 (belatedly assigned the designator of "Aardvark") was a large two-seat multi-role aircraft that would be used to good effect in the upcoming Vietnam War. The two crew members sat in a side-by-side arrangement in a fully-jettisonable cockpit capsule, with each member having equal access to all controls on the main panel. The F-111 was powered by a series of ever-increasing Pratt & Whitney brand powerplants and could field a variety of laser-guided, seeking, and drop bombs from up to 8 underwing hardpoints (four to a wing - the area under the fuselage was reserved for an internal weapons bay though the area between the engines could fit an ECM or data link pod). The aircraft utilized a single vertical tail fin mounted between the twin engines running that ran aft of the cockpit and the remaining length of the fuselage.

Early development of the F-111 proved problematic and costly. The fleet defense derivative which was designated the F-111B for the US Navy was cancelled altogether due to performance and weight issues (the latter issue directly related to the former). Even when the system was already in operational status along the frontlines over Vietnam, the system was still exhibiting technological issues. Despite these initial shortcomings, the product evolved into an effective and multi-faceted combat platform that would see service up until the late 1990's.©MilitaryFactory.com
Advertisements

The F-111C became an export model to the only other operator of the F-111, that being Australia. Delivery of these 24 aircraft were delayed until 1973 when they had been originally ordered as early as 1963. Four of these became hybrid reconnaissance/bomber models as RF-111Cs, fitted with cameras and reconnaissance equipment while still retaining their combat strike capabilities.

The F-111D was an "improved" Aardvark featuring uprated engines, new avionics, a revised canopy and a revised air intake. Ninety-Six were delivered with operational service attained in 1974. Delayed once again hampered these deliveries, for the D-models were ordered several years prior in 1967. The F-111E became an interim model following the "breaking-in" issues encountered with the D-models. Ninety-four of these E-models arrived even before the D-models were brought fully online.

F-111F was the final production variant of the Aardvark line. Improved avionics, simplified systems and improved capabilities stemmed from this new model. The FB-111A "Switchblade" (name is unofficial) was a strategic bomb variant used in place of Boeing B-52 Stratofortresses and Convair B-58 Hustlers in service with US Strategic Air Command. Production of this type amounted to 76 examples. The F-111K was a British order intended to fill the void of the cancelled BAC TSR-2 bomber program fro 1965, with the Aardvark order itself eventually canceled by the British in 1968. The F-111G were used as trainers.

The evolution of the F-111 saw the aircraft pass through a series of first-run models that focused on increasing the performance of the Pratt & Whitney engines. Forty-two F-111A models were also converted to the famous EF-111 Raven series of electronic warfare aircraft (conversions completed by Grumman) and were utilized in the Persian Gulf War. These systems were originally designed to replace the aging Douglas EB-66 aircraft. The Raven models featured a noticeable bulb on the top of their vertical tail fins.

The US Strategic Air Command (SAC) operated their FB-111 models from 1969 through 1990 while the USAF usage covered 1967 through 1998 (the USAF batch consisting of Ravens).©MilitaryFactory.com
Note: The above text is EXCLUSIVE to the site www.MilitaryFactory.com. It is the product of many hours of research and work made possible with the help of contributors, veterans, insiders, and topic specialists. If you happen upon this text anywhere else on the internet or in print, please let us know at MilitaryFactory AT gmail DOT com so that we may take appropriate action against the offender / offending site and continue to protect this original work.
Advertisements

Australia; United States
(OPERATORS list includes past, present, and future operators when applicable)
✓ Ground Attack (Bombing, Strafing)
Ability to conduct aerial bombing of ground targets by way of (but not limited to) guns, bombs, missiles, rockets, and the like.

(Showcased performance specifications pertain to the General Dynamics F-111F Aardvark production variant. Performance specifications showcased above are subject to environmental factors as well as aircraft configuration. Estimates are made when Real Data not available. Compare this aircraft entry against any other in our database or View aircraft by powerplant type)
OPTIONAL:
1 x 20mm M61 Vulcan internal cannon.

Mission-specific ordnance can include any of the following (up to 31,500lb):

(Not all ordnance types may be represented in the showcase above)
Hardpoint Mountings: 9
Mounting Points 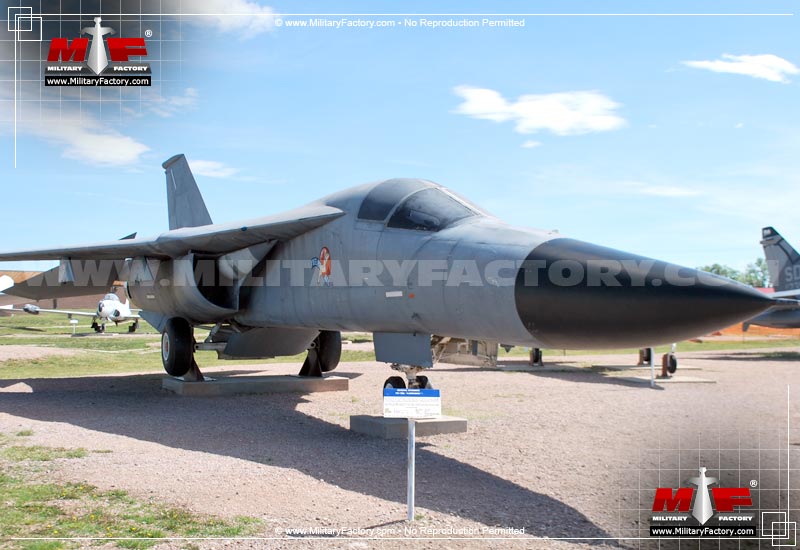 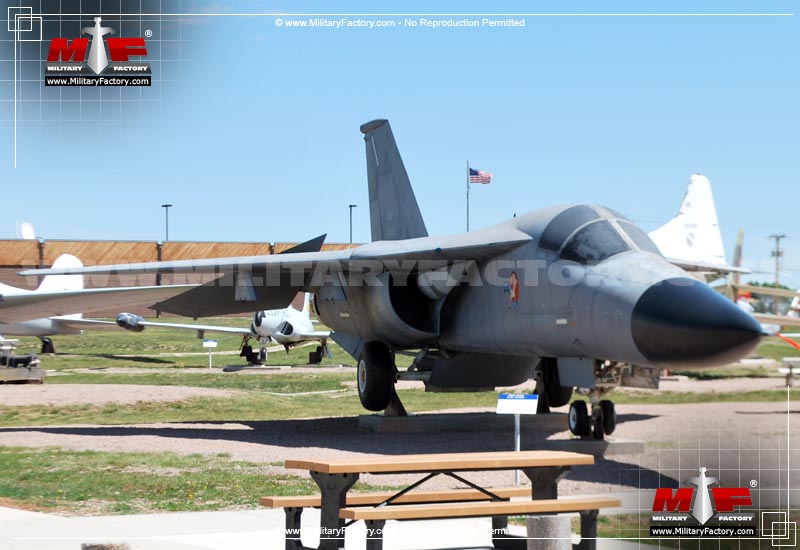 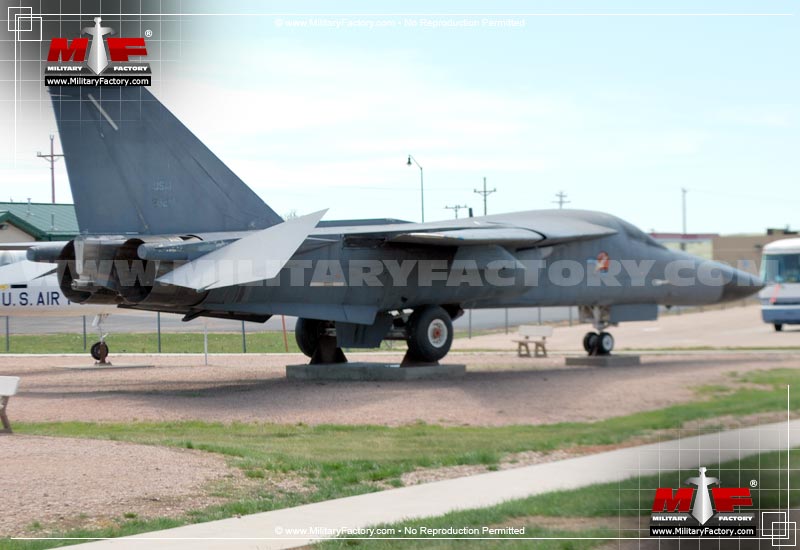 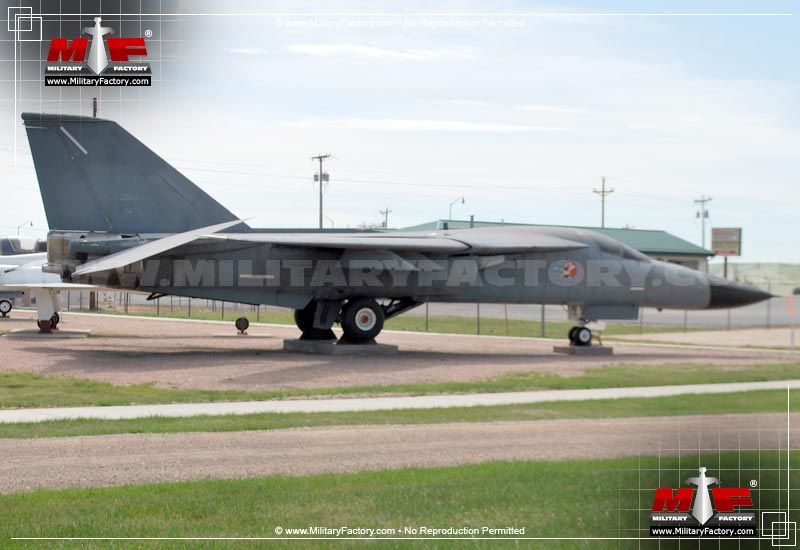 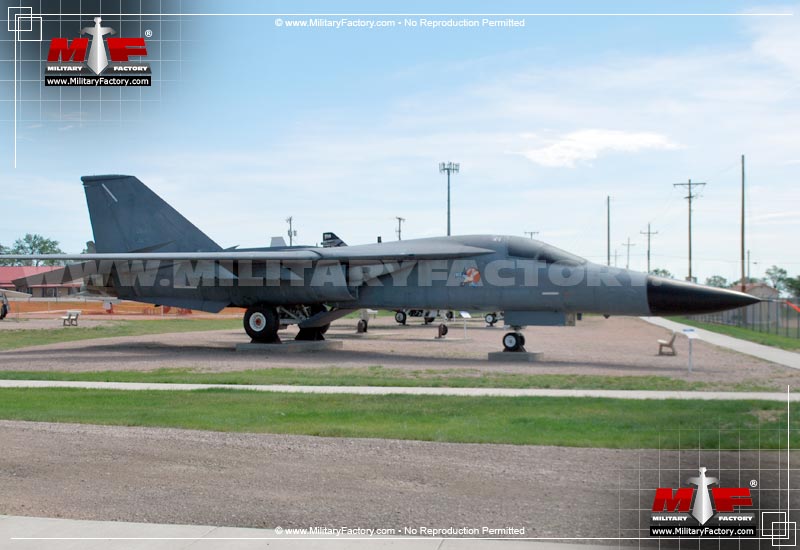 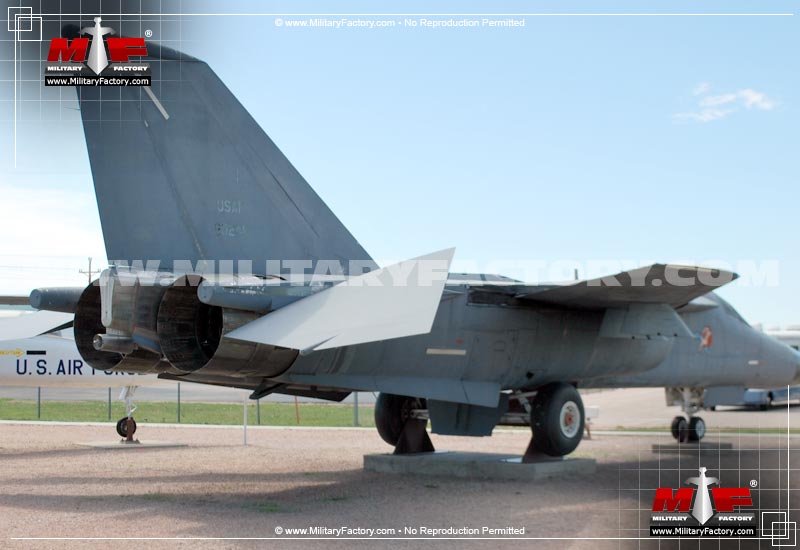 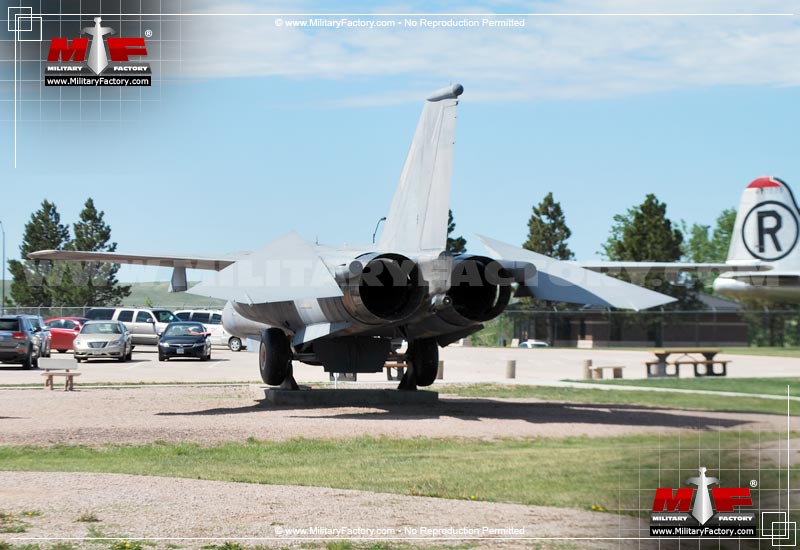 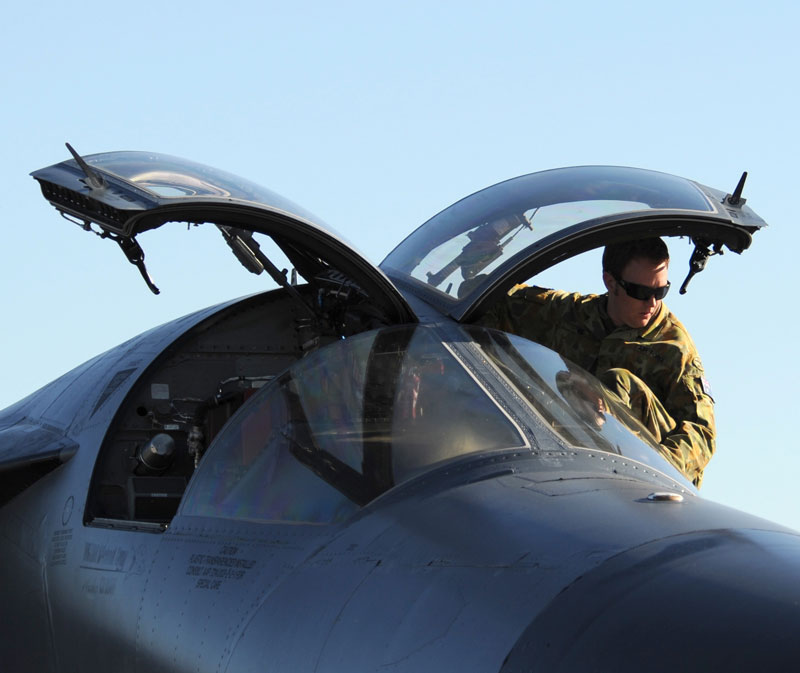 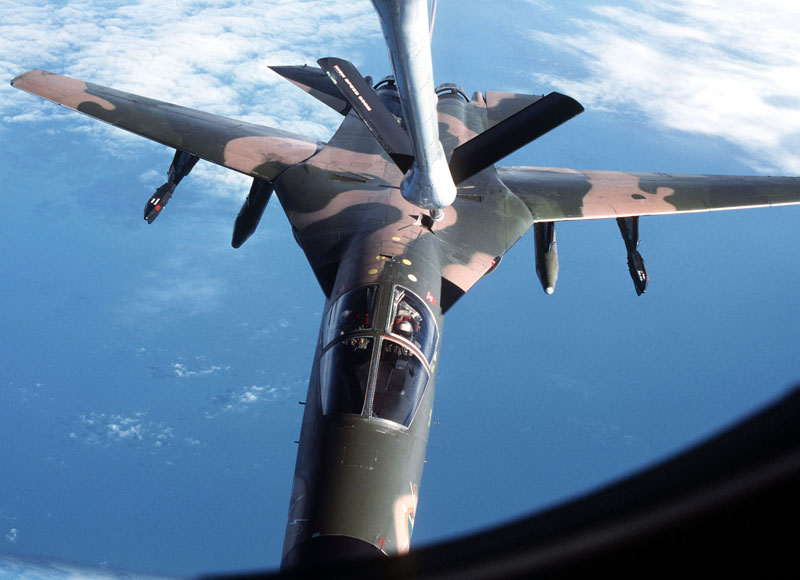 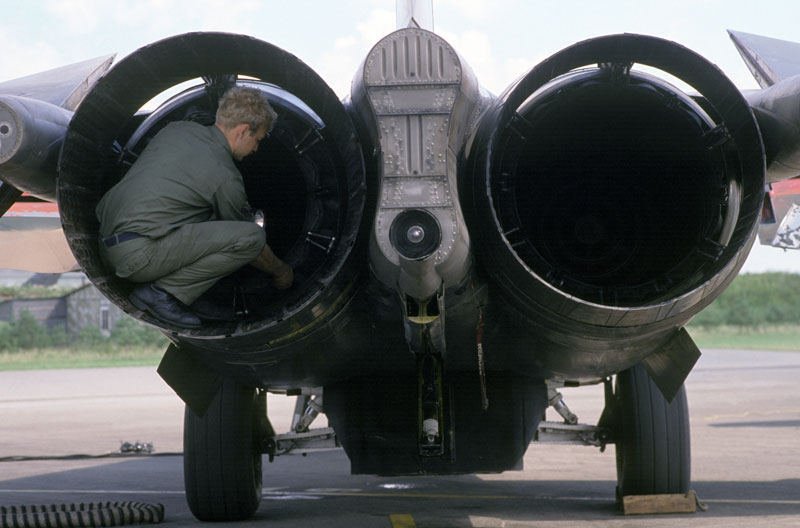 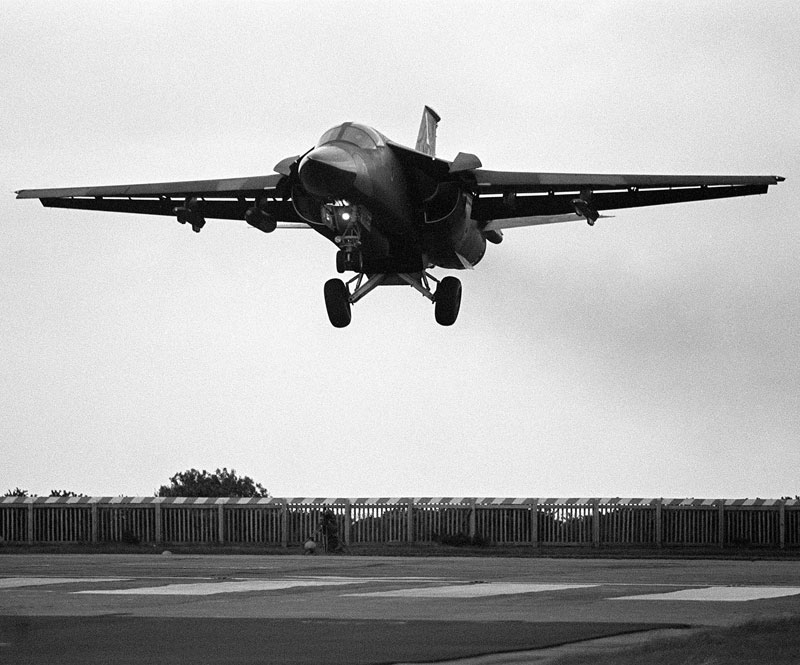 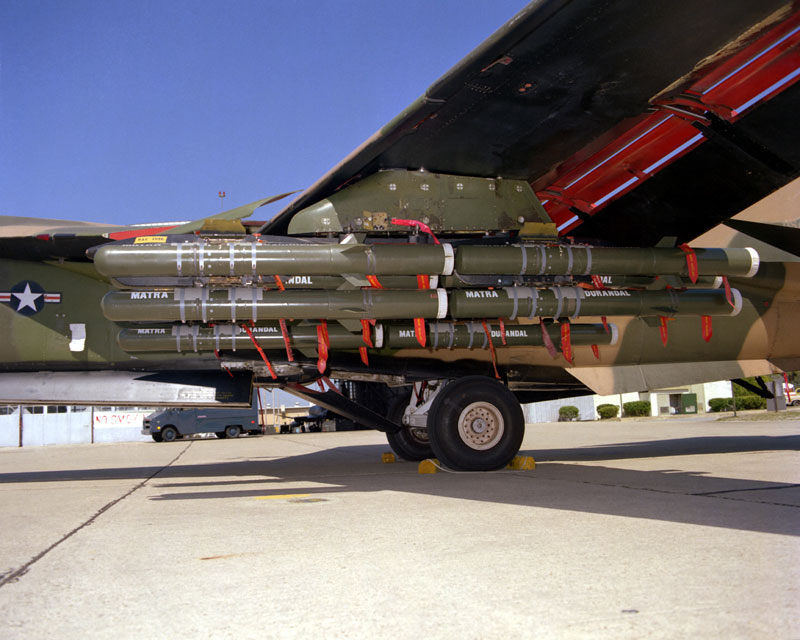 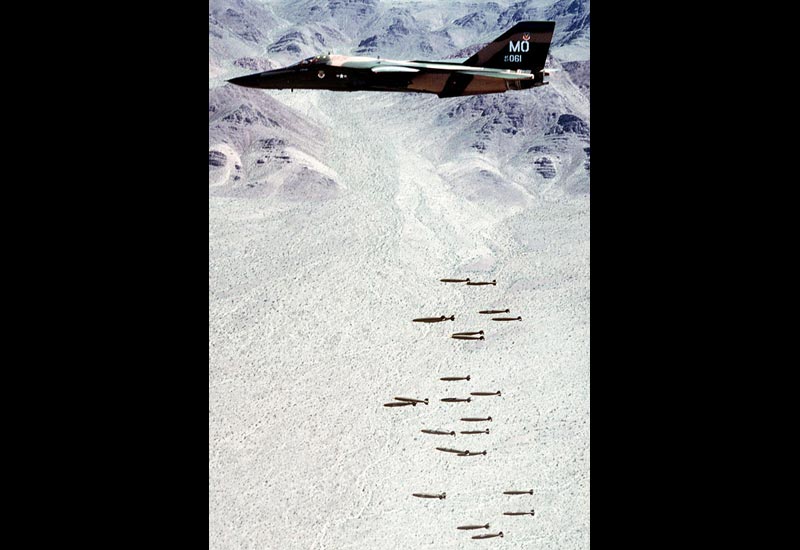 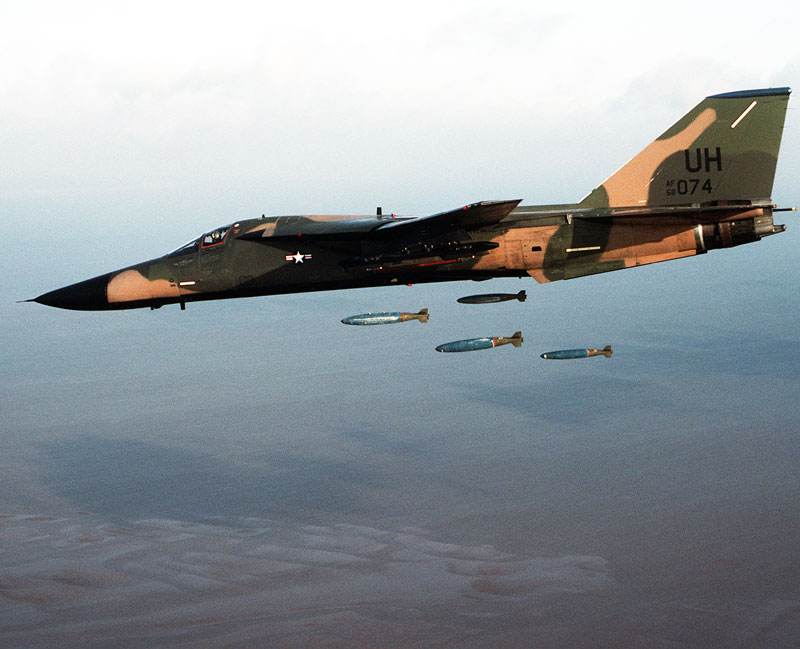 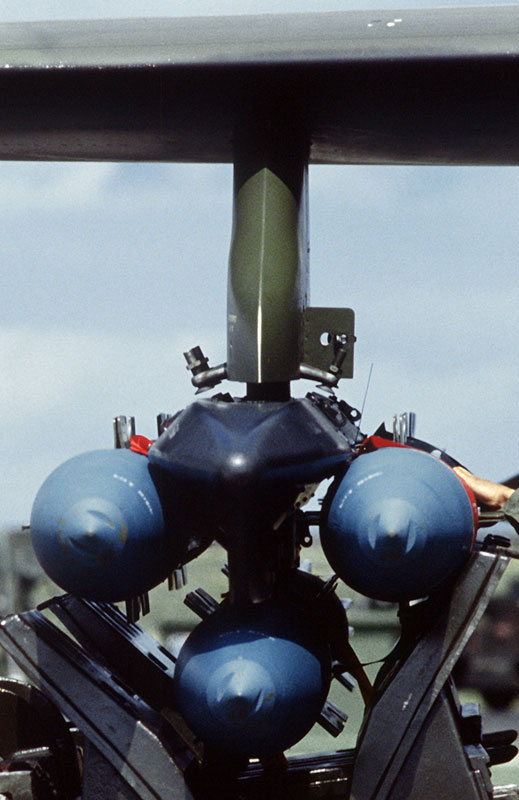 Aviation developments of similar form and function, or related to, the General Dynamics F-111 Aardvark...