The Vought VE-7 biplane made up the first two fighter squadrons for the United States Navy through VF-1 and VF-2 - 128 total aircraft were produced into 1928. 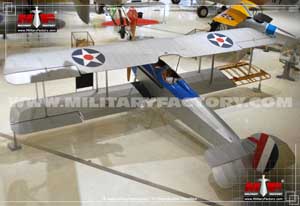 In 1917 Mr. Birdseye B. Lewis formed an aircraft business with the Vought group, becoming the Lewis & Vought Corporation in the United States. The Vought VE-7 Bluebird, named for Lewis himself, was a biplane designed that same year. Lewis & Vought produced this initial offering as a 2-seat trainer for the United States Army. While being tested and used by the Army, Brigadier General Billy Mitchell commented favorably on the aircraft's flying abilities, rating them as good as or even better than any current fighters of the day. The selected powerplant was the Wright Hispano-Suiza engine designated as HS-8A. With a compression ratio listed from 4.7 to 5.3, Swedish engineer Marc Birkigt increased the power output to 180 horsepower (132 kW) at 2,100 rpm. 49,800 of these engines were eventually produced and made itself a legacy as one of the best engines of its type. Wright-Hispano engines also powered the fabled French SPAD biplane fighters in World War 1.

After World War 1, the US Army cancelled its order for 1,000 aircraft but the US Navy was still very interested in the VE-7 concept and received an evaluation machine in May of 1920. Testing the aircraft proved it sound for USN operational requirements and the adopted the VE-7 as its very first fighter aircraft. Full rate production orders soon followed and demand proved more than the young Vought organization was capable of. The US government had anticipated this and formed the Naval Aircraft Factory (NAF). The factory was established by the United States Navy in 1918 in Philadelphia to assist such companies in solving the problem of aircraft supply versus demand. The Navy Department surmised that it was necessary to build a Navy-owned aircraft factory to guarantee a constant supply of aircraft and to help in obtaining cost data for the comparison against private manufacturing firms. Some 128 VE-7s were ultimately built and the single-seat fighter version of the VE-7 was further designated as VE-7S complete with a faired over front cockpit and room for a single Vickers-brand .30 caliber machinegun off-set left and synchronized to fire through the two-bladed propeller.

The Navy created its first two fighter squadrons in VF-1 and VF-2 and equipped them both with these VE-7s. Fighter Squadron VF-1 was originally established on July 1s, 1922, and operated as VF-1 until July 1, 1934 . Squadron VF-2 was originally established as Combat Squadron Four on September 23rd, 1921, making its home base at Naval Air Station San Diego, California. The squadron was re-designated Fighter Squadron VF-2 on July 1st, 1922 and were assigned these Vought VE-7 biplanes. The squadron, also known as the "Flying Chiefs," operated from the carrier USS Langley.

Lieutenant Virgil C. Griffin made history on October 17, 1922 when he took off in a VE-7 biplane from the deck of the new USS Langley (CV-1) marking the first such action completed from an American Navy carrier.
Advertisements

United States
(OPERATORS list includes past, present, and future operators when applicable)
✓ Air-to-Air Combat, Fighter
General ability to actively engage other aircraft of similar form and function, typically through guns, missiles, and/or aerial rockets. ✓ Maritime / Navy
Land-based or shipborne capability for operating over-water in various maritime-related roles while supported by allied naval surface elements. ✓ Training (General)
Developed ability to be used as a dedicated trainer for student pilots (typically under the supervision of an instructor).

(Showcased performance specifications pertain to the base Vought VE-7 Bluebird production variant. Compare this aircraft entry against any other in our database or View aircraft by powerplant type)
STANDARD:
1 x 7.7mm (.30) Vickers machine gun synchronized to fire through the spinning propeller by way of interrupter gear. 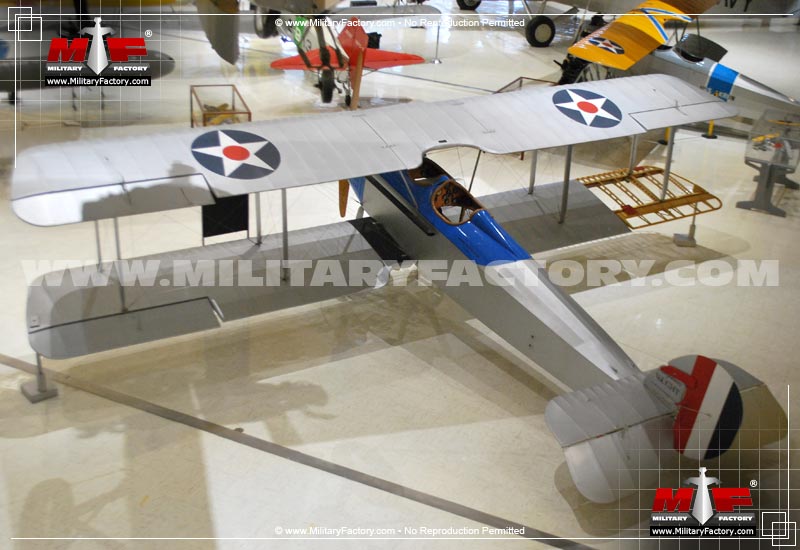 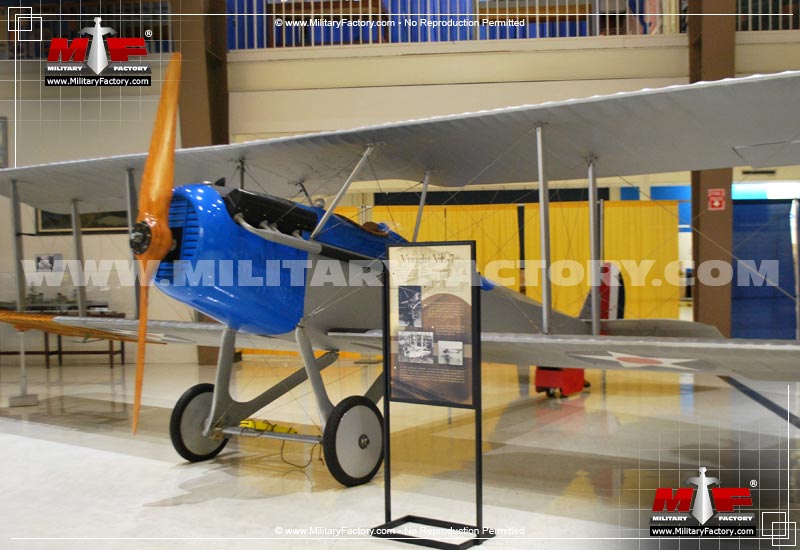 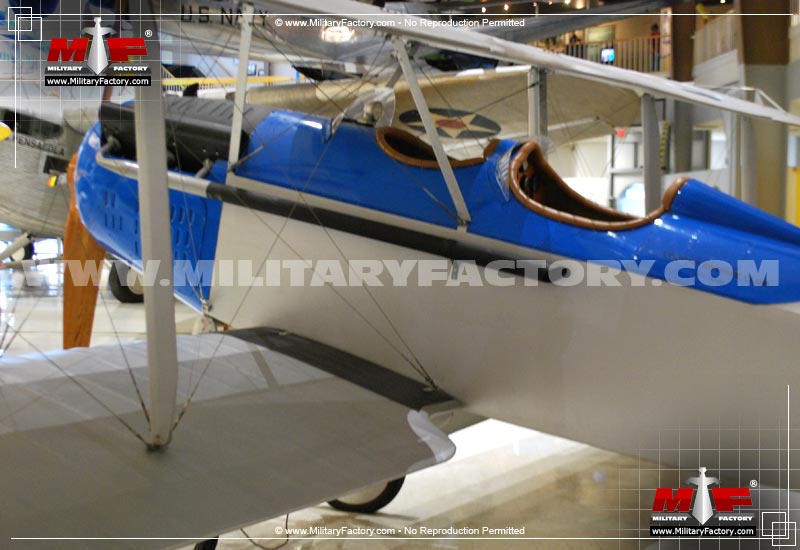 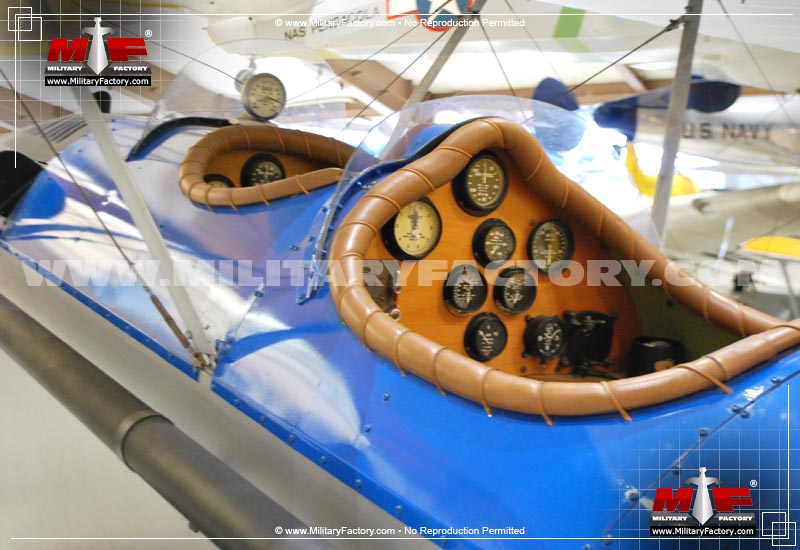 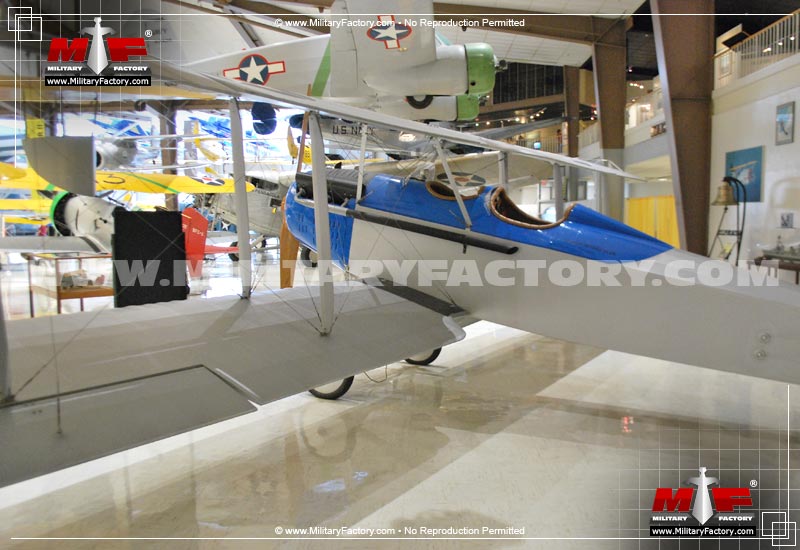 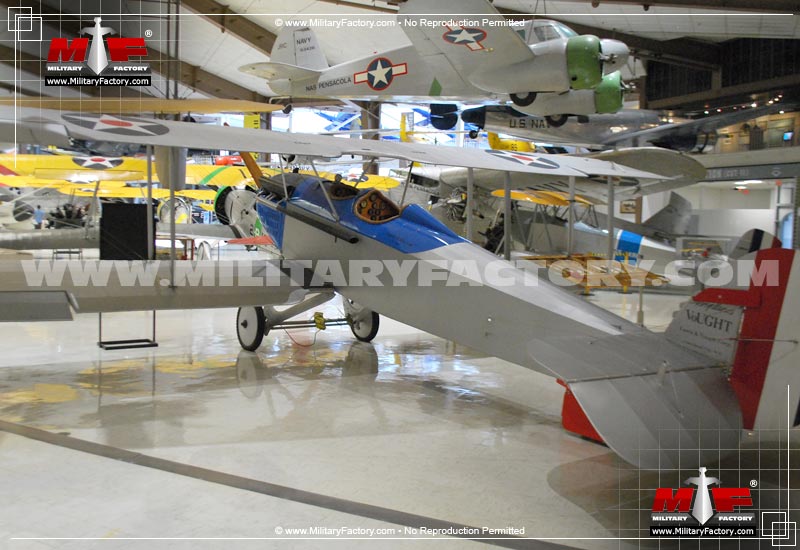 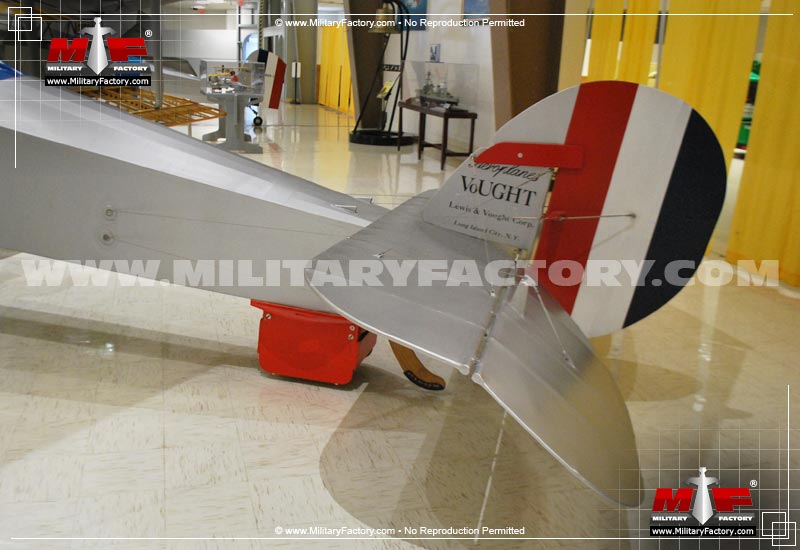 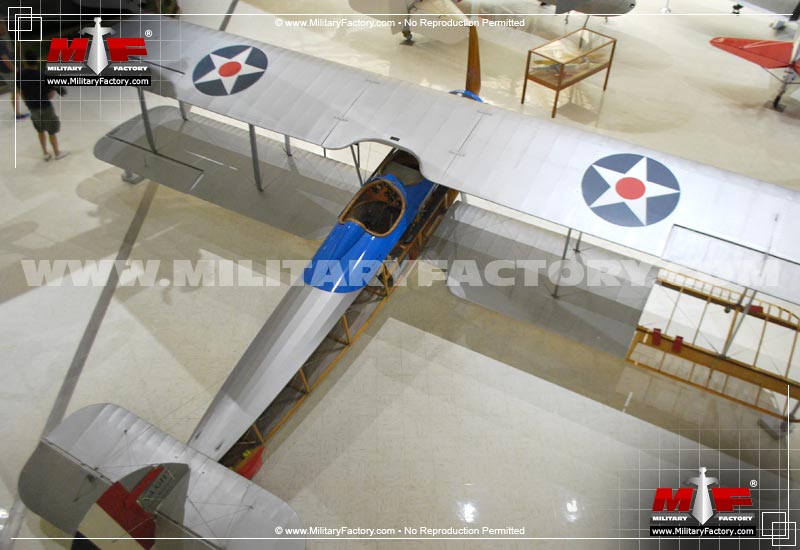 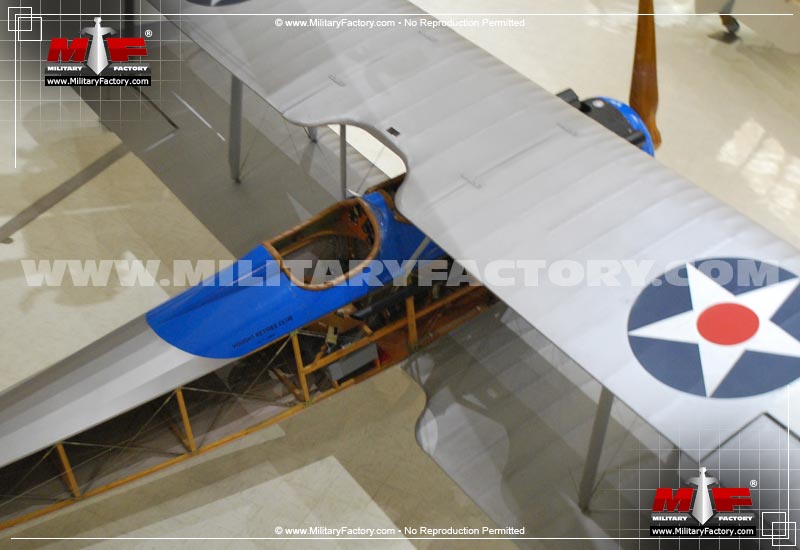 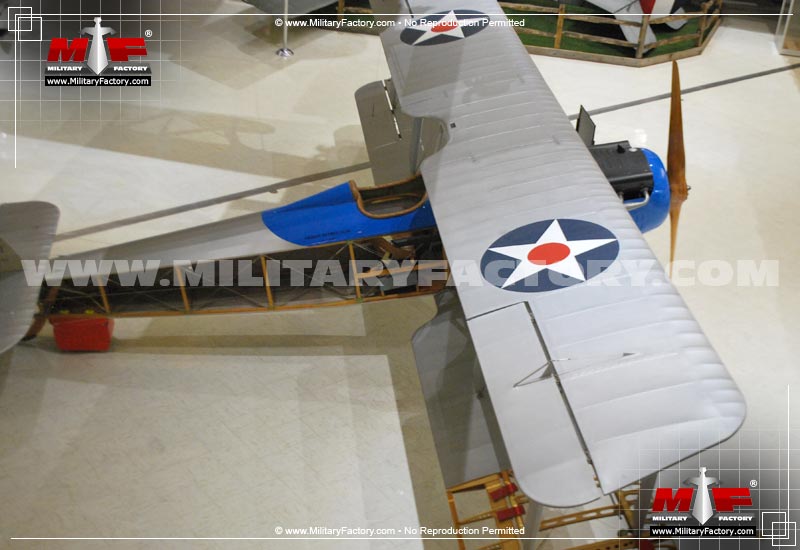 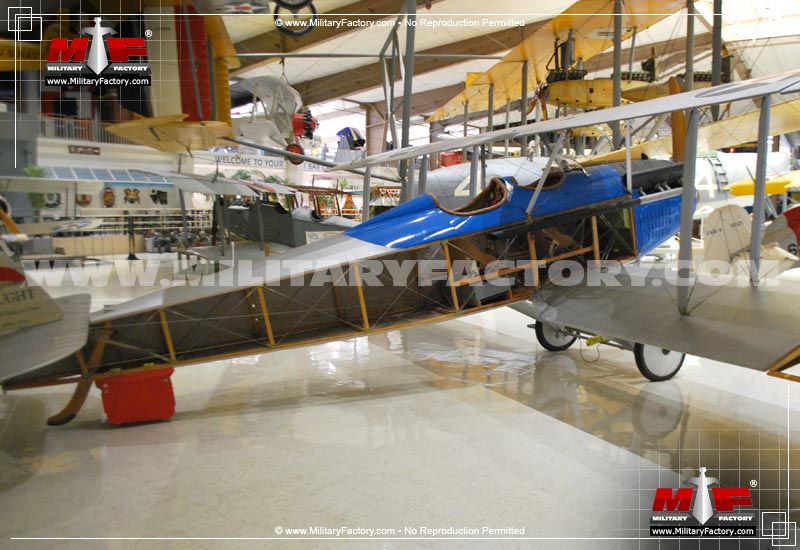 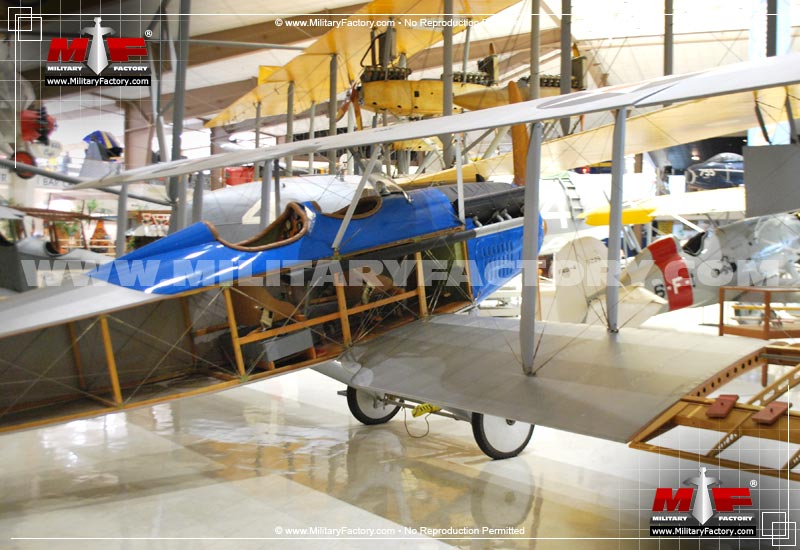 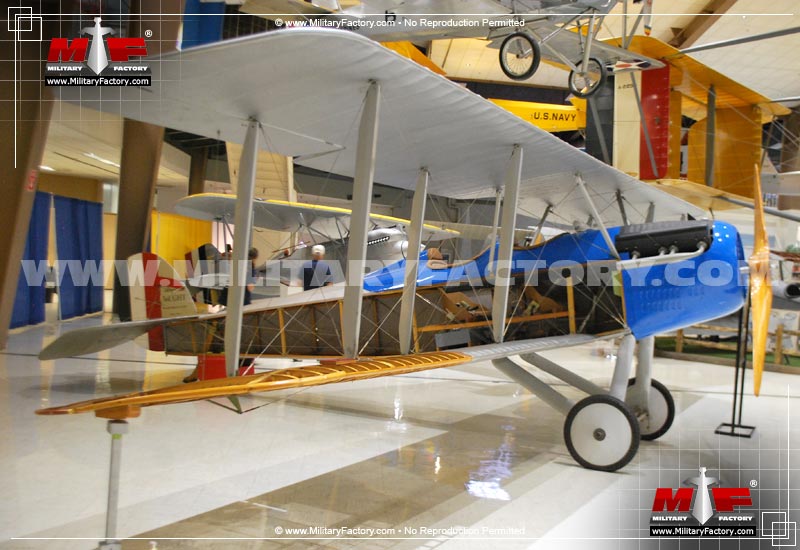 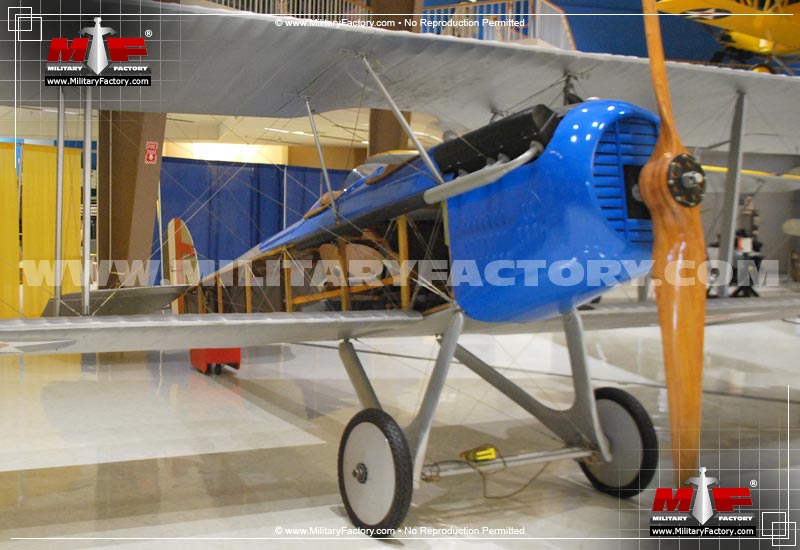 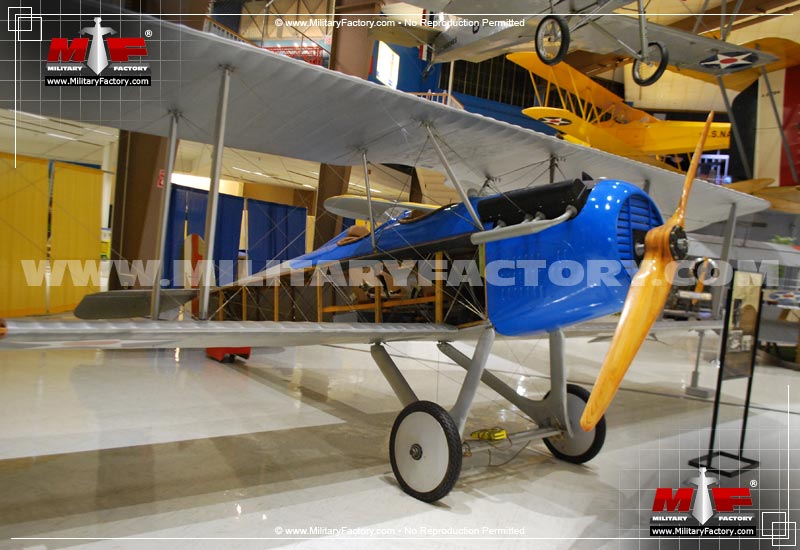