The multi-faceted and capable Fairey Gannet, a Cold War warrior for several operators, featured contra-rotating propeller units at the nose and crew of three. 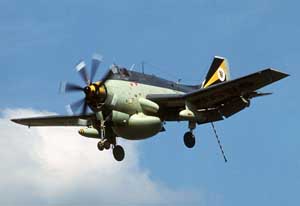 The Fairey Gannet was a dedicated anti-submarine platform primarily serving the Fleet Air Arm of the British Royal Navy during the Cold War years. She was an aircraft design originating from a 1945 British Admiralty initiative (GR.17/45) requiring an advanced, carrier-based, anti-submarine warfare (ASW) platform. Both Fairey Aviation Company and Blackburn Aircraft responded with prototypes "Fairey 17" and "B-54" respectively. Both were of outwardly similar design, sporting conventional monoplane wings, stout reinforced airframes, internal bomb bays and a tricycle undercarriage. The "gannet" name was derived from the species of large seabirds common to the North Atlantic, the southern regions of Africa and the South Pacific (near Australia and New Zealand). Their predatory nature is such that they dive, at speed, upon unsuspecting prey in the water and can continue the chase of said prey while remaining submerged.

The Blackburn B-54 featured a piston engine while the follow-up prototype, the B-88, was fitted with a gas-powered turbine engine driving a large-radius contra-rotating propeller system. The internal bomb bay was affixed to the underside of the fuselage. The pilot and his observer sat in tandem under a framed canopy. The empennage was conventional, featuring a single vertical tail fin with a pair of horizontal planes. A radar scanner was mounted under the base of the empennage in a cylindrical fitting and was retractable into the fuselage. First flight was recorded on September 20th, 1949. Only three Blackburn prototypes were produced in all before the program was shelved in favor of the Fairey product.

The Fairey design (attributed to engineer H.E. Chaplin) made use of the Armstrong Siddeley Mamba gas-turbine engine in a dual configuration arrangement earning the pair the collective name of "Twin Mamba" or "Double Mamba". The arrangement showcased the engines in a side-by-side seating coupled to a single gearbox and powering contra-rotating propellers fitted to the nose of the aircraft. The engines exhausted from oblong ports along the sides of the fuselage, just above and aft of the wing trailing edges. The aircraft could be flown on just one engine in the event of a failure or to conserve fuel and could also operate with kerosene or diesel fuel as opposed to the more volatile high-octane fuel common to carrier piston engine aircraft of the time. The initial crew complement included the pilot, seated in the forward cockpit, and an observer, seated in a rear cockpit just aft of the pilot. Like the Blackburn design, the Fairey 17 also sported a retractable radome assembly under the base of the tail and an internal bomb bay compartment under the fuselage. The wings were cranked upwards outboard of the main landing gear legs. As the design was intended to be fielded from British carriers, the wings were designed to fold for optimal storage space; the assemblies took on a very distinct "Z" shape as a result, folding at two hinged locations and effectively "stacking" the wing vertically upon itself. The nose landing gear leg of the tricycle undercarriage gave the aircraft a distinct "nose up" appearance when at rest.

After the prototype was developed, the design was slightly revised to include a third crewmember as an additional observer. This added a third segregated cockpit to the layout, set just aft of amidships behind the wing yet ahead of the tail assembly. Of course this addition was not without effect and it was found to disrupted the airflow along the stabilizers on the tail forcing the use of small "finlets" along the fuselage sides aft of the wing assemblies to counter the issue. First flight of the Fairey 17 occurred on September 19th, 1949. On June 19th, 1950, the prototype made her first evaluation landing on the deck of the HMS Illustrious carrier. Content with the results, British authorities ordered the type for production as the Fairey "Gannet" AS Mark 1 (AS.Mk I) before the end of 1953. Deliveries of the first 100 aircraft began in April of 1954. That same year, a modified trainer variant was flown and accepted, entering service in 1955 as the T Mark 2 (T.Mk II). The first Gannet squadron for the Fleet Air Arm became 826 NAS, stationed on the HMS Eagle.

Production ran from 1953 until 1959 to which 348 examples were ultimately delivered by Fairey. ©MilitaryFactory.com
Advertisements

The AS Mark 1 (AS.Mk I) was the primary 3-seat production model of which 180 examples were built. The T Mark 2 (T.Mk II) became the primary training variant of the AS 1 production model. 35 of this type were produced. The AS Mark 4 (AS.Mk 4) soldiered on as an improved anti-submarine platform with a revised engine featuring greater output and was essentially the 170th production model onwards of the AS.Mk I. Eighty-two examples were produced. The COD Mark 4 (COD.Mk 4) were AS.Mk 4 production models revised for use as carrier-based transport aircraft. The T Mark 5 (T.Mk 5) was the trainer version of the AS.Mk 4 production model though only eight of this type were delivered. The A.Mk 6 were AS.Mk 4 models fitted with new and improved radar systems and revised electronics. The ECM.Mk 6 was an electronic countermeasures (ECM) land-based Gannet variant. The last production Gannet became the AEW.Mk 3 utilized by the Royal Navy as an airborne early warning (AEW) platform beginning in 1958. Forty-four examples of this type were ultimately built with first flight recorded on August of 1958. AEW.Mk 3 equipped four flights of No. 849 Squadron.

By the middle of the 1960s, the Fairey Gannet series - and its respective tasks - was being replaced by the Westland Whirlwind series of land- and carrier-based helicopters. The primary role of the Gannet now shifted wholly to use as electronic countermeasures platforms while some were revised as dedicated transports for passengers and cargo alike. It was about this time that the system was purchased by foreign parties including Australia, West Germany and Indonesia. The last of the Fairey Gannets was retired for good on December 15th, 1978, ending her long, yet useful, tenure for multiple naval parties.

The Fairey Gannet was operated by the 724, 725, 816 and 817 squadrons of the Royal Australian Navy. The German Navy also operated the type with Marinefliegergeschwader 2 and Marinefliegergeschwader 3 up until 1963 and 1966 respectively. The aircraft was purchased in small quantities by the Indonesian Navy as well.©MilitaryFactory.com
Note: The above text is EXCLUSIVE to the site www.MilitaryFactory.com. It is the product of many hours of research and work made possible with the help of contributors, veterans, insiders, and topic specialists. If you happen upon this text anywhere else on the internet or in print, please let us know at MilitaryFactory AT gmail DOT com so that we may take appropriate action against the offender / offending site and continue to protect this original work.
Advertisements

(Showcased performance specifications pertain to the Fairey Gannet AS Mark 4 production variant. Performance specifications showcased above are subject to environmental factors as well as aircraft configuration. Estimates are made when Real Data not available. Compare this aircraft entry against any other in our database or View aircraft by powerplant type)
Mission-specific. Up to 2,850lbs of internal and external stores including:

General Assessment
Firepower
Performance
Survivability
Versatility
Impact
Values are derrived from a variety of categories related to the design, overall function, and historical influence of this aircraft in aviation history.
Overall Rating
The overall rating takes into account over 60 individual factors related to this aircraft entry.
38
Rating is out of a possible 100 points.
Relative Maximum Speed
Hi: 300mph
Lo: 150mph
This entry's maximum listed speed (300mph). 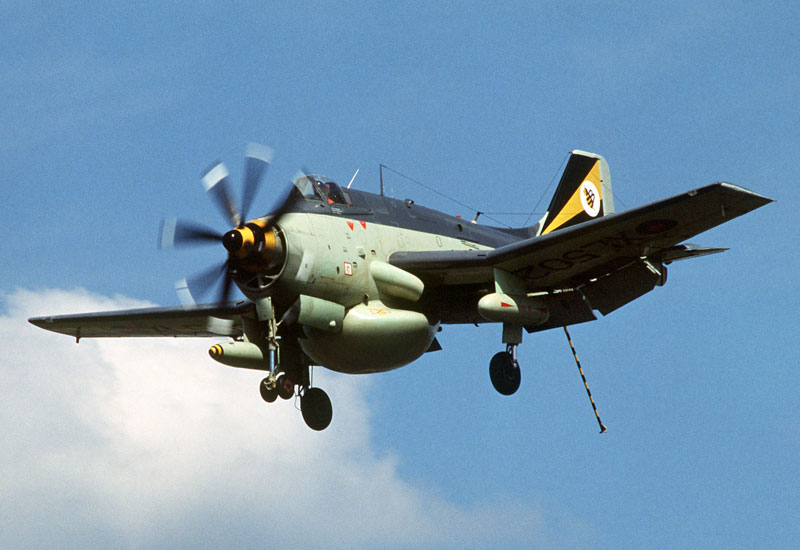