The Sukhoi Su-7 Fitter-A was produced in nearly 1,850 examples with over a quarter of these made available for export.

Authored By: Staff Writer | Last Edited: 07/29/2019 | Content ©www.MilitaryFactory.com | The following text is exclusive to this site. 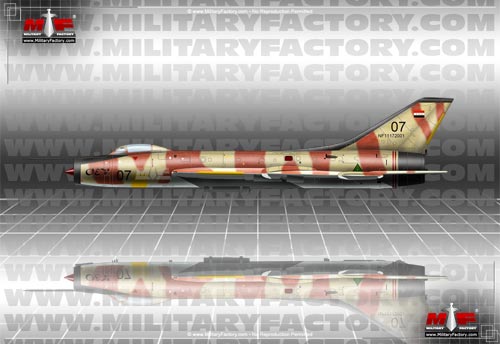 The Sukhoi Su-7 (NATO codename of "Fitter-A") was a single-seat, single engine jet-powered fighter in service with the Soviet Air Force (Frontal Aviation) throughout the 1960s. It was a nuclear-capable aircraft that went on to be a successful ground-attack fighter (noted for its ability to withstand large amounts of combat damage and still fly), seeing extensive combat actions particularly in the Middle East and in Southern Asia. The type was delivered to Warsaw Pact nations as well as trusted Third World allies and, today, few are in service with any air force. Despite its speed, bombing accuracy and battlefield robustness, the Su-7's powerplant proved exceedingly thirsty, limiting its tactical usefulness to its meager combat radius of several hundred miles. The aircraft went on to be produced in at least ten known major variants that also included a two-seat trainer and appeared in approximately 1,847 total production examples from 1957 to 1972.

The Su-7 began life as early as 1953 (the final year of the Korean War), to which the Sukhoi OKB firm was reestablished and charged with finding an answer to the North American F-86 Sabre jet fighter. The American jet effectively "stole" the Korean War away from the North Korean/Chinese/Soviet conglomerate, matching wits with the highly-prized Soviet-made Mikoyan-Gurevich MiG-15 "Fagot" single-seat, single engine, swept-wing jet fighter.

A Sukhoi swept-wing design soon emerged as the S-1 "Strela", a prototype revealed by the mid-1950's and fitted with a new Lyulka AL-7 series turbojet engine within a long and slender aerodynamic fuselage. The aircraft featured an open nose assembly for which to feed the engine and air intake was controlled through a variable-position nose cone mounted within the intake itself. First flight was on September 7th, 1955 and further tests allowed the fighter to set an internal Soviet speed record of over Mach 2. Since the S-1 would be called upon in the air-to-air combat role, close-in armament was key to its success and ultimate survival. Sukhoi called on an intended battery of 3 x 37mm Nudelman N-37 series cannons as well as a retractable under-fuselage tray housing up to 32 x 57mm unguided rockets (the Americans fielded similar fighters armed as such, though complimented by machine guns instead of cannon). The S-1 was unveiled to Western eyes in the 1956 Soviet Aviation Day presentation at Tushino Airport near Moscow.

The S-2 prototype soon appeared though this time showcasing a new "slab" tailplane assembly and general external refinements over the S-1. The S-1 was later fatally lost (its test pilot killed) in an accident on November 23rd, 1956. Regardless, the program proceeded and ultimately produced the base Su-7 production-level fighter in 1959.

Like most other early and middle Cold War-era jet fighters, the Su-7 was envisioned in a dedicated ground-attack variant. The S-22 pre-production model was developed for this purpose - based on the S-2 prototype - and brought with it an area-ruled fuselage as well as other refinements. The S-22 was designed in such a way as to take advantage of the aircraft's inherent speed while taking into account the low-level bombing role it would be utilized in. First flight occurred in March of 1959 and, before long, the type emerged as the Su-7B production model in 1961.

In typical NATO fashion, the non-flattering codename of "Fitter" was attached to the Soviet aircraft line. NATO maintained a "healthy" habit of assigning Soviet fighters with "F" based names (MiG-17 "Fresco") while bombers were given "B" names (Tu-85 "Bear").

While serving the Soviet Union in number, the Su-7 went on to see service with a bevy of trusted nations. These included Afghanistan, Algeria, Bangladesh, Czechoslovakia, Hungary, Egypt, India, Iraq, North Korea, Poland, Syria, Vietnam and Yemen. Many of these are no longer in service in any form though those in North Korea are believed to still be active. Deliveries to Warsaw Pact and Third World nations centered on Eastern Europe, Central Asia, Southern Asia, Eastern Asia and some entities in North Africa and the Middle East (including Iraq). India was a major operator of the type under their Indian Air Force banner, owning some 160 total aircraft. Afghanistan was another major operator, maintaining some 120 Fitters of their own.

The Sukhoi Su-7 sported clean lines and was consistent with other Soviet jet fighter designs of the Cold War, photographed almost exclusively in its bare metal finish. Of particular note was the long and streamlined fuselage to which all major systems were installed. Like other early jet fighters, the Su-7 was capped with an open nose acting as an inlet for the single turbojet engine mounted in the middle of the aircraft and incoming air being controlled via an adjustable nosecone. The cockpit was positioned in the forward portion of the fuselage and offered up adequate-to-poor visibility forward, upwards and to the sides. Rear vision was more-or-less blocked by the raised rear portion of the cockpit canopy and fuselage spine. The canopy was of a two piece design with featured framing. The pilot was afforded a Sukhoi-designed ejection seat. The cylindrical fuselage was relatively featureless and concluded in a conventional empennage sporting a large vertical swept tail fin with a clipped tapered edge. The horizontal tailplanes were affixed to either side of the jet exhaust ring and were extremely swept. The main wings of the aircraft were mid-mounted assemblies and heavily swept with clipped wingtips, sporting identifiable boundary layer fences past the middle span (similar to those as found on the early MiG Fagot, Fresco and Farmer jet fighters). The undercarriage was full-retractable and consisted of two single-wheeled main landing gear legs recessing towards centerline under each wing and a single-wheeled nose landing gear leg recessing forwards under the cockpit floor.

Standard armament was decidedly Soviet and consisted of a pair of powerful 30mm Nudel'man-Rikhter NR-30 series cannons, one mounted in each wing root leading edge. Each cannon was afforded approximately 70 rounds of ammunition. Optional armament could be spread out amongst the six available hard points (limited to just four hardpoints in earlier production models) and could include a combination of conventional drop bombs (FAB-250, FAB-500, FAB-750), nuclear bombs (8U69 5-kiloton), rocket pods (57mm rockets in UV-16-57U series pods) and AA-2 "Atoll" short-range air-to-air missiles (essentially copies of the American AIM-9 Sidewinder). It should be noted that, to combat the Su-7s short range, two of the external hardpoints were generally reserved for the carrying of 600-gallon fuel tanks.
Advertisements

The Su-7 was the first production Fitter fighter and was the base model intended for the tactical air superiority role. It was developed from the S-2 prototype and produced in 132 examples from 1957 to 1960.

The Su-7B became the dedicated ground-attack variant capable of high-speed performance in the low-level role. These were developed from the S-22 pre-production aircraft and were built between 1960 and 1962.

The Su-7BM became an upgraded Fitter, this mounting an all-new AL-7F-1 series turbojet engine. To help promote better range, these Su-7s were given two additional hardpoints for use with external fuel tanks. Additional fuel was added within the wings (making them "wet" wings) and an all-new fuel system was integrated. External "piping" was affixed to the sides of the upper fuselage and would later help Western observers in identifying this new Fitter type. The Su-7BM was cleared for carrying nuclear weapons in the form of conventional drop bombs. Production occurred between 1963 and 1965.

The export Su-7BMK was fitted with a Lyulka AL-7F-1 turbojet engine yielding 21,164lbs of thrust. Performance included a top speed of 720 miles per hour (Mach 0.95), an operational ceiling of 42,650 feet and a combat radius of 285 miles. Armament remained the twin 30mm cannons with an ordnance load of up to 5,512lbs.

The Su-7BKL (Sukhoi designation of S-22KL) was a more hardy version of the Fitter family intended for "rough" field operations. Small skis were added to either side of the main landing gear legs (straddling their respective wheels) while two brake chutes were installed to help promote shorter landings. Shorter take-offs were addressed through the implementation of SPRD-110 series JATO (Jet-Fuel Assisted Take-Off) rockets that could bring to bear 13,300lbs of thrust. Production of the Su-7BKL began in 1965 and ended in 1972.

The Su-7U became a two-seat trainer featuring tandem seating for a student and an instructor. Installation of the second cockpit forced the deletion of an internal fuel tank thusly decreasing the aircraft's range further. The prototype first flew on October 25th, 1965 and production lasted from 1966 into 1972. NATO assigned the codename of "Moujik" to the aircraft and the Su-7UMK designation served as a marking for the export version.

The Su-7IG became a designation used to signify the experimental airframe meant to test out a new variable geometry wing system ("swing-wing") that would ultimately be used on the production models of the similar-looking Su-17 (the Su-7IG was essentially its prototype). Another test model became the 100LDU, a modified Su-7U production model fitting canards and a fly-by-wire system that would later assist in the development of the forthcoming Su-27 "Flanker" series.

As a staple of the early and middle Cold War years, the Su-7 was due for combat actions somewhere around the volatile globe. Egypt accepted delivery of the type for their air force and was quick to field them against Israel in the Six Day War of 1967 and the combat actions that followed in the ensuing years. The Six Day War (June 5th through June 10th) was a combined military operation by Egypt, Jordan and Syria (with support from other Arab states) to decimate Israel. Naturally, Israel retaliated against the odds to earn themselves an overwhelming victory.

In the Indo-Pak War of 1971, India fielded the aircraft against Pakistani forces. These were primarily used as strike aircraft called upon to run round-the-clock sorties. It was in this conflict that the Su-7's resilience proved a major selling point for many-an-Indian pilot returned safely to their airbases with extensive airframe damage from Pakistani anti-aircraft guns, cannons and missiles. Though these Su-7 purchases by the IAF have seemingly always been met with mixed reviews by those involved, few can doubt that the aircraft fulfilled a vital role in replacing the aging French and British jet fighters it kept in the stable before the conflict. Indian Su-7s operated in conjunction with Soviet-made Mikoyan-Gurevich MiG-21 "Fishbed" fighters, the latter supplying vital air cover.

All in the Family

The design of the Su-7 was successful for the air forces that utilized her but it was a design not without inherent limitations. As such, the type was furthered in the similar "swing-wing" Su-17 Fitter and ultimately leading up to the Su-20 and Su-22 developments as well. These aircraft are detailed elsewhere on this site.
Advertisements 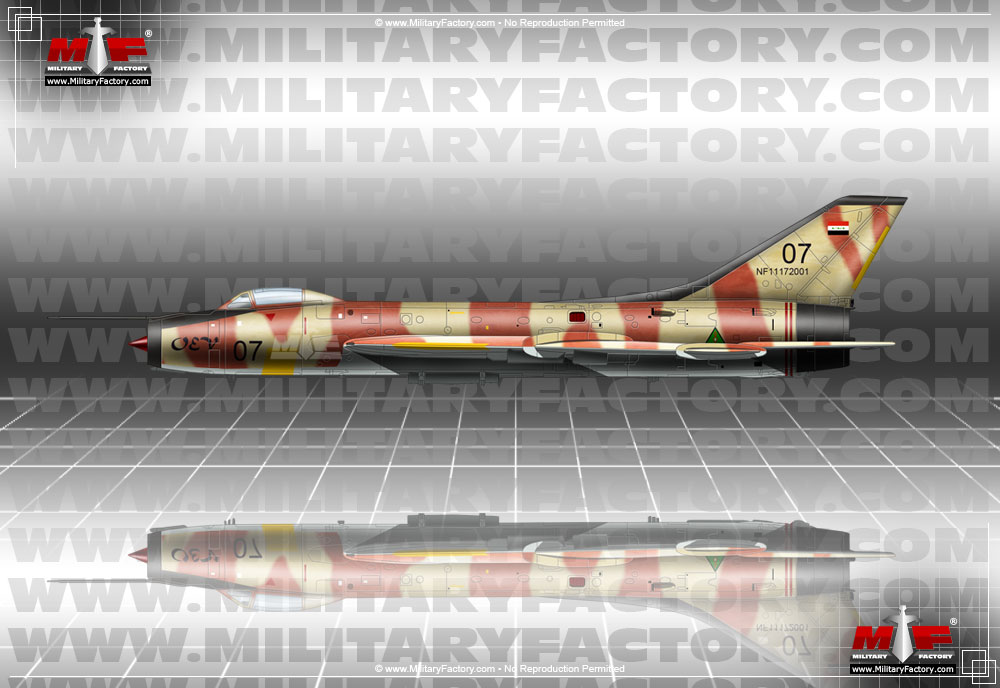 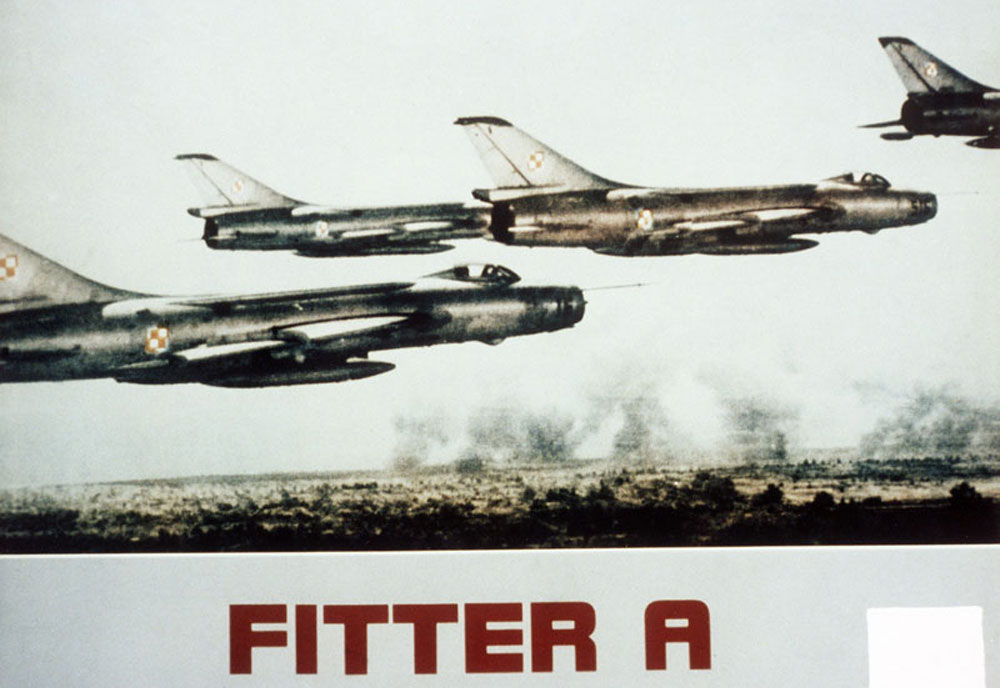 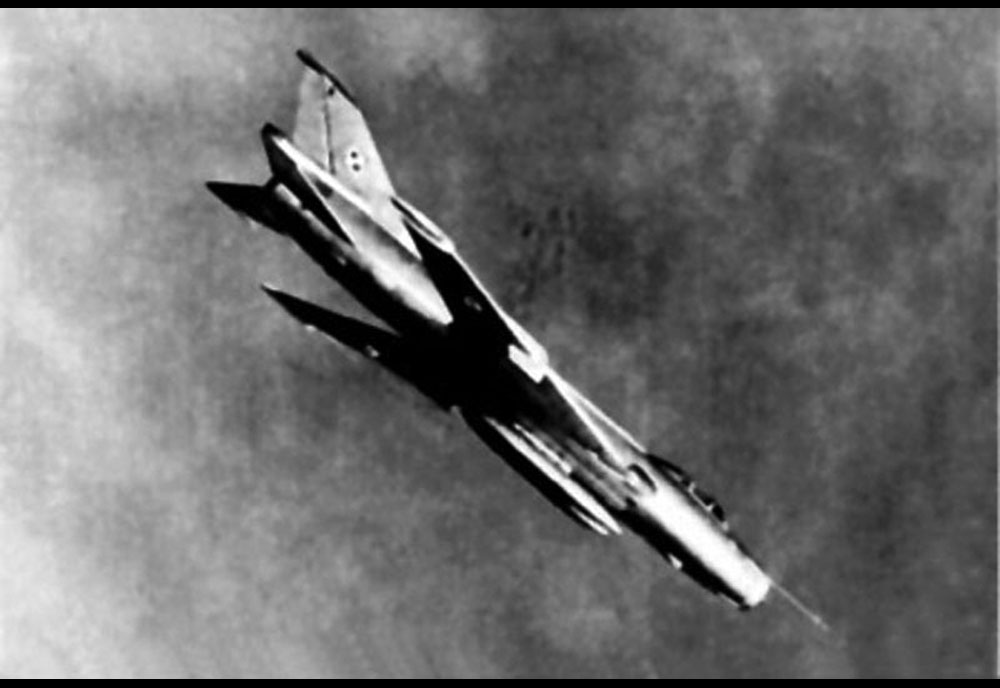 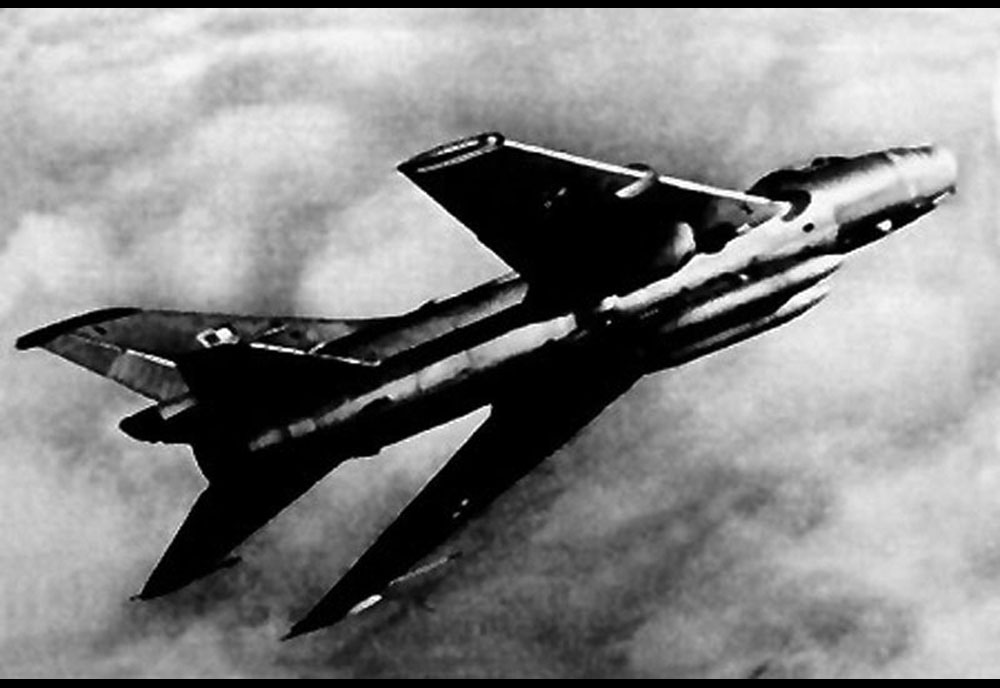