Despite its impressive showing, the Northrop F-20 Tigershark was doomed by the arrival of the General Dynamics F-16 Fighter Falcon.

Authored By: Staff Writer | Last Edited: 08/16/2019 | Content ©www.MilitaryFactory.com | The following text is exclusive to this site. 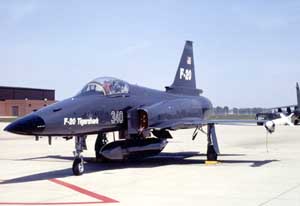 The Northrop F-20 Tigershark was a further evolution of the F-5 Tiger II line, specifically the F-5E model series. The F-20 emerged from a program in 1975 as part of a United States Air Force's (USAF) endeavor known as "FX". The aircraft was initially born as the "F-5G" of the Tiger II line and gradually evolved to become its own design. At its core, the F-20 was intended as a low-cost, export-friendly frontline performance fighter capable of meeting the latest in Soviet fighter threats - primarily the very capable Mikoyan-Gurevich MiG-21 "Fishbed". The F-20 would have allowed the United States to sell its new aircraft to allied nations without exposing its advanced technologies to the enemy. However, the F-20 arrived at a time when the United States was welcoming a new administration and the General Dynamics F-16 Fighting Falcon had emerged as a similar low, cost, multi-role fighter alternative. In the end, the F-20 existed in three completed prototype forms and the line was never sold to any foreign party. The entire program was given up in 1986 while the F-16 became the Cold War-era light fighter stalwart the F-20 could have been.

The prototype F-20 first flew on August 30th, 1982 and named the "Tigershark" in 1983. Compared to the F-5 before it, the F-20 was given a single, all-new engine that offered better performance, a new radar system that allowed for the latest American air-to-air munitions to be used, ground-attack capabilities and modernized avionics. The F-20 was a greater performance thoroughbred than the preceding F-5 and looking to become a good gamble for Northrop Corporation, who took development of the F-20 on as a private venture at an end-project cost of $1.2 billion USD.

Internally, the F-20 pilot was given an all-modern cockpit with a very organized instrument panel, full-service HUD (Head-Up Display) and two large Multi-Function Displays (MFDs). Controls were of a Hands-On-Throttle And Stick (HOTAS) configuration allowing the pilot to keep both hands on critical control systems while the instrument panel lay within easy reach. Vision out of the cockpit was good, reminiscent of the F-5 series, save for views to the rear which were covered by the raised fuselage spine. The pilot sat under a single-piece canopy with a single-piece forward windscreen. An ejection seat was standard. The avionics suite included the General Electric AN/APG-67 series multi-mode, X-Band pulse Doppler radar. The system eventually fell under the Lockheed Martin brand label when General Electric sold off its radar section and found service with the modern Taiwanese Air Force AIDC F-CK-1 "Ching-Kuo" and South Korean KAI/Lockheed T-50 "Golden Eagle".

Outwardly, the F-20 mimicked the F-5 to a large degree. It held a sharp nose cone assembly housing a radar suite which allowed for engagement with missile armament "Beyond Visual Range" (BVR). The cockpit sat well aft of the nose though ahead of midships. The single engine installation was buried deep within the aft fuselage section while being aspirated through a pair of small rectangular intakes along the cockpit sides and exhausted through a single, large ring under the tail rudder. The empennage consisted of a single vertical tail fin and low-set horizontal planes. The main wing appendages were short protrusions with swept-back leading edges and straight trailing edges. The wings were clipped and designed to accepted Sidewinder short-ranged air-to-air missiles as standard. The undercarriage was conventional and wholly retractable consisting of a pair of main legs and a nose leg.
Advertisements

Of the three F-20s completed (a fourth was under construction), two were lost during flight testing which claimed the lives of their pilots. SN 82-0062 crashed at Suwon Air Base, South Korea on October 10th, 1984 while demonstrating the F-20's capabilities to the South Korean government. SN 82-0063 crashed at CFB Goose Bay in Canada on May 14th, 1985. The sole surviving F-20 prototype went on to see the rest of its days as a museum showpiece, suspended in the display at the California Science Center in Los Angeles, California.

As completed, the F-20 fielded a length of 47 feet, 4 inches with a wingspan of 28 feet and height of 13 feet, 10 inches. Empty weight was listed at 13,150lb with a maximum take-off weight of 27,500lb. Its power was derived from a single General Electric F404-GE-100 series turbofan engines which supplied the airframe with up to 17,000lb of thrust. Maximum speed was Mach 2+ with a combat radius reaching 345 miles. Ferry range was out to 1,715 miles. The aircraft could operated up to a service ceiling of 55,000 feet and sported a rate-of-climb of 52,800 feet per minute.

Armament-wise, the F-20 featured a standard fitting of 2 x 20mm Pontiac M39A2 internal cannons in the nose assembly. Each cannon was granted 280 projectiles each and were used for close-in combat or in ground attack strafing actions. The aircraft was given five hardpoints for up to 8,000lb of underslung ordnance across one fuselage centerline position and two underwing hardpoints at each wing appendage. There were also the wingtip hardpoints but these were reserved exclusively for the Sidewinder missile series.

As such, the F-20 could be outfitted with an air-to-air or air-to-ground munitions capability depending on operator requirements. The aircraft and its onboard systems supported AIM-9 Sidewinder air-to-air missiles as well as the AGM-65 Maverick air-to-surface missile, the latter a proven weapon for defeating ground targets including tanks. A typical bomb dropping quality was also inherent with support for unguided munitions such as the Mark 80 bomb series. Additional support was given for use of CBU-type cluster bomb weapons and practice ordnance. Beyond missiles and bombs, the F-20 was also cleared to fire several types of rocket pods for air-to-ground sorties.

The Tigershark was eventually marketed to a variety of potential suitors including the USAF and United States Navy (USN). The USN sought a new aggressor aircraft for its dogfighting training program - TOP GUN - specifically an aircraft that could mimic the capabilities of Soviet fighters of the day for new generations of Western fighter pilots. As with others, the USN elected to settle on the excellent F-16 line. The USAF elected not to purchase the F-20 whatsoever - which effectively doomed the line for further development and acceptance in the world market - many saw the lack of USAF endorsement of the Northrop aircraft as an indictment on its value. Morocco was originally in line with a 20-strong order for F-20s but this was cancelled as was a smaller order from Bahrain.
Advertisements

OPTIONAL:
Up to 9,000lb of external stores supporting:

(Not all ordnance types may be represented in the showcase above)
Hardpoint Mountings: 5 (including wingtip mounts)

F-5E "Tiger II": - Base model on which the F-20 was developed from.
F-20 "Tigershark" - Base Series Designation based on F-5E Tiger II model and marketed as an "improved" Tiger II with single-engine installation, new avionics, multi-role capabilities and better performance.
F-5G - Original F-20 model designation 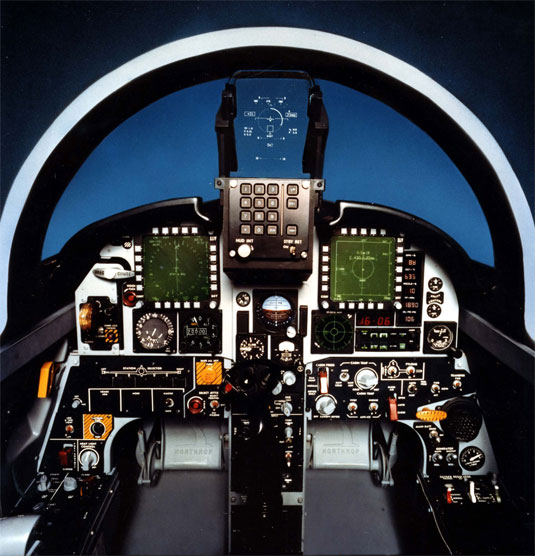 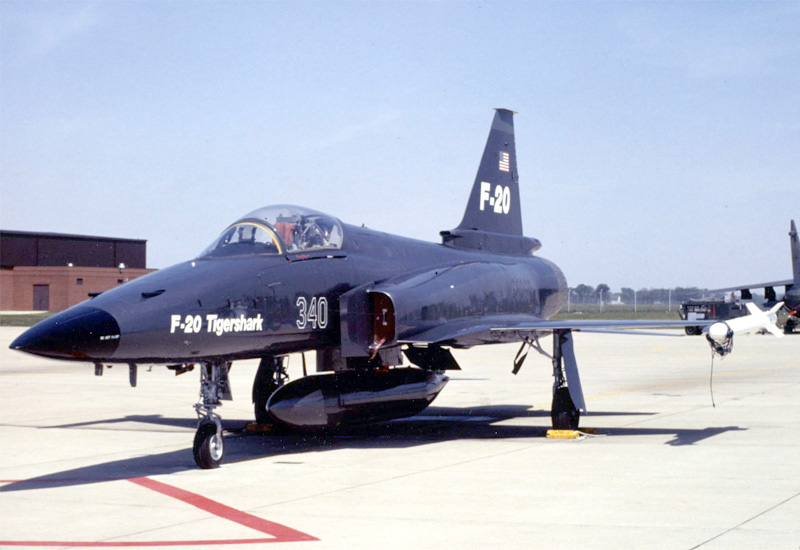 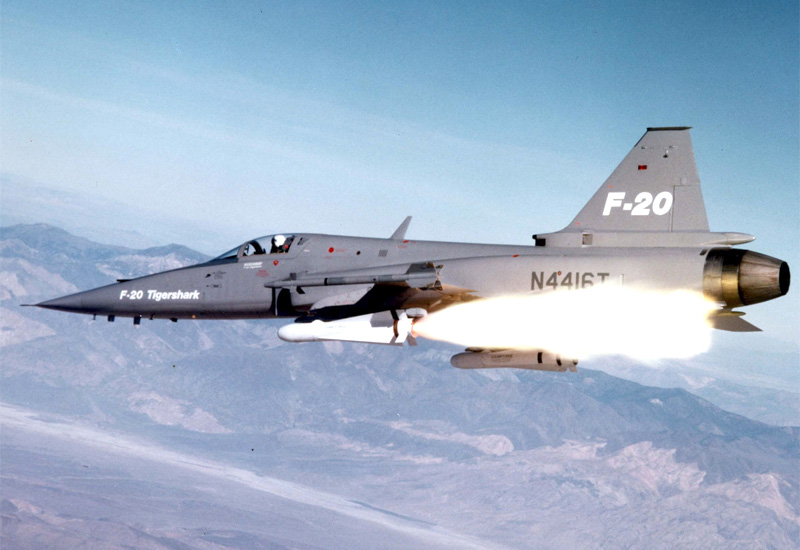 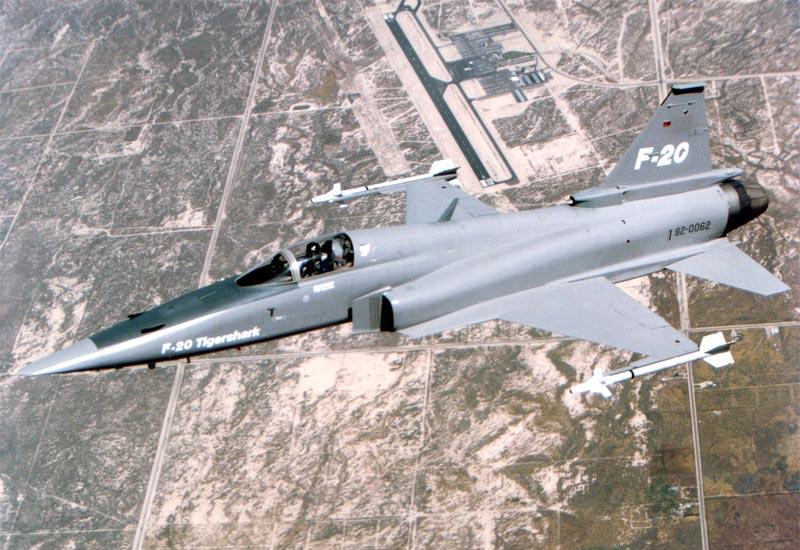 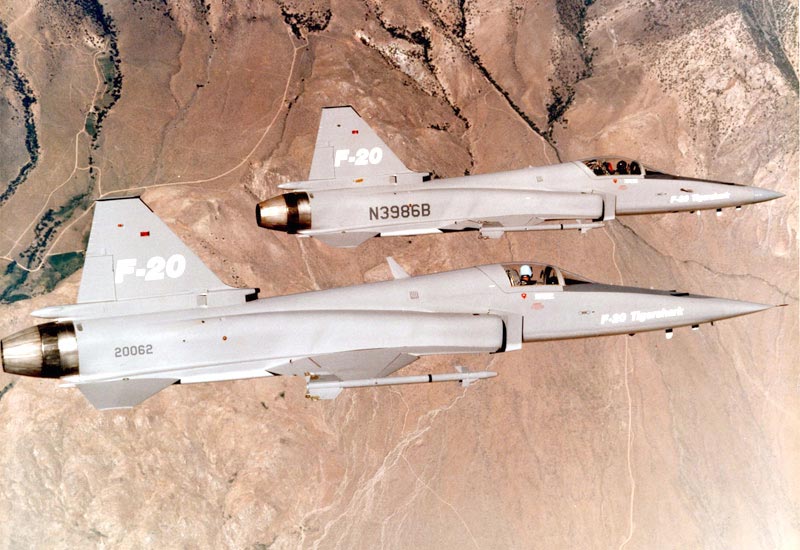 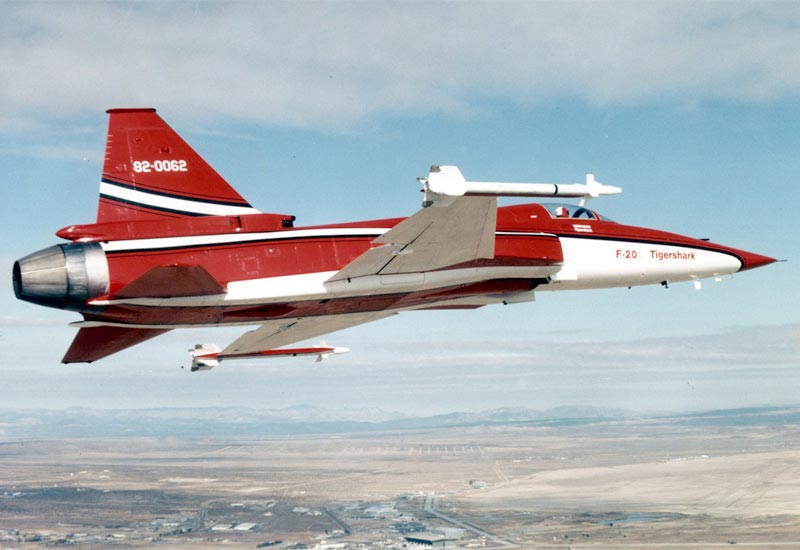 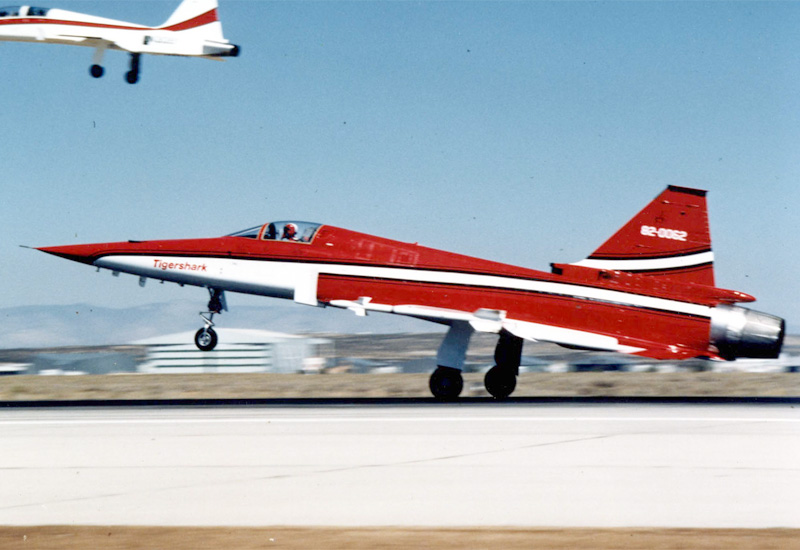