The proposed Arado Projeckt II of wartime Germany was to feature a crew of two in a pressurized cabin complete with ejection seats. 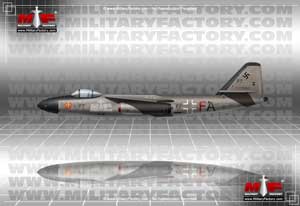 The Arado Ar Projekt II was a proposed jet-powered fighter of considerable size. It carried a basic classification of nightfighter / all-weather fighter and appeared in paper form towards the end of the European Campaign. The aircraft featured several cutting-edge design aspects that included swept-back wings, wing-mounted jet engines, a pressurized crew cabin (complete with side-by-side seating for two and ejection seats) and a retractable tricycle landing gear system. The main gears would recess into the tubular fuselage while the nose gear disappeared just under the cockpit seating area.

Design was traditional in the jet-fighter sense with an aerodynamic featureless fuselage. The engines were mounted under each wing just past the wing roots and would have been either 2 x HeS 011A series or 2 x BMW 003A series turbojet engines (a performance speed of 466 miles per hour was estimated). Wings were monoplanes and shoulder-mounted high up on the fuselage just aft of the cockpit. The fuselage ended in a point with tail planes also featuring swept back design and a single vertical tail surface. Armament was intended to be 4 x MK 108 series 30mm cannons with two mounted high on the nose and two mounted underneath the nose.

In all, the Arado Ar Projekt II was an ambitious undertaking that most likely would have been limited by Reich production capabilities and turbojet technology. At least on paper, the Projekt II was a promising look into the future of jet-powered air combat and nothing was spared in its design by Arado. The fact that this aircraft (and most other German jet aircraft designs of the time) never even saw prototype construction was a benefit to the Allies and then some.©MilitaryFactory.com
Note: The above text is EXCLUSIVE to the site www.MilitaryFactory.com. It is the product of many hours of research and work made possible with the help of contributors, veterans, insiders, and topic specialists. If you happen upon this text anywhere else on the internet or in print, please let us know at MilitaryFactory AT gmail DOT com so that we may take appropriate action against the offender / offending site and continue to protect this original work.
Advertisements

(Showcased performance specifications pertain to the base Arado Ar Projekt II production variant. Performance specifications showcased above are subject to environmental factors as well as aircraft configuration. Estimates are made when Real Data not available. Compare this aircraft entry against any other in our database or View aircraft by powerplant type)
PROPOSED:
2 x MK 108 30mm cannons in upper nose assembly.
2 x MK 108 30mm cannons in lower nose assembly. 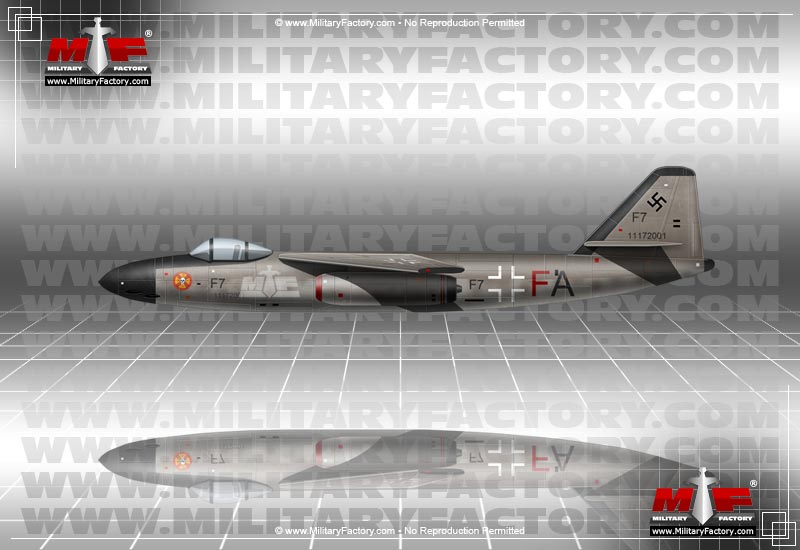