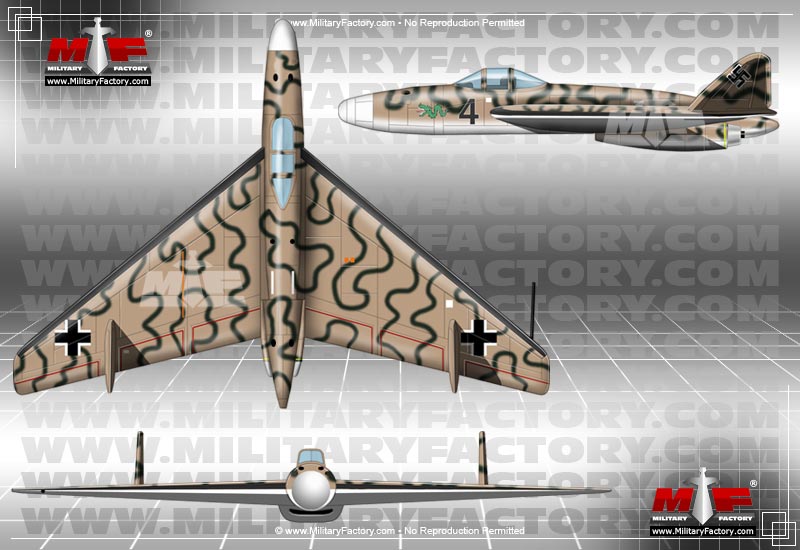 The Arado NJ-1 Nacht Jager was a proposed nightfighter design featuring a three-man crew in a pressurized cockpit as well as extensive cannon armament.

Authored By: Staff Writer | Last Edited: 10/23/2018 | Content ©www.MilitaryFactory.com; the following text is exclusive to this site.
Project NJ-1 "Nacht Jager 1" ("Night Hunter 1") was put forth by the Arado concern of Germany during the latter stages of World War 2 to fulfill a Luftwaffe requirement for a new jet-powered night fighter. The aircraft was to be a multi-crew aircraft powered by two engines for the fast speeds required and promote strong maneuverability when engaging incoming enemy forces. The Luftwaffe need was also met by competing designs from Blohm and Voss, Dornier, Focke-Wulf and Gotha. Despite the interest, the requirement was eventually cancelled due to the declining war situation for Germany and, of the designs submitted, only the Blohm and Voss aircraft was furthered through a prototype contract prior to war's end, this becoming the Bv P.215.

As a night fighter, the NJ-1 had to fulfill various qualities for the Luftwaffe - speed, control, armament and reaction. Speed would be managed by its selection of jet propulsion which still proved an infant technology this late in the war. Control was to be provided through ailerons, elevators and split flaps found about the wing structures as well as small vertical fins. Armament followed the German belief that autocannons were the answer when attempting to bring down the large bombers of the Allies. Reaction meant that the aircraft would be able to respond quickly to incoming formations of Allied bombers, able to go airborne in short order and reach the necessary altitude before engaging through armament and the element of surprise. Direction-finding would be radios and tracking by way of radar. As such, the workload would be spread across the three-man crew.

Arado engineers elected for a swept wing, tailless design incorporated side-by-side cockpit seating for its three crew (it is assumed only two would be side-by-side with the third in a rear, rear-facing cockpit to handle the defensive weaponry). The twin engine arrangement was also a side-by-side installment and these fitted under the aft portion of the aircraft's fuselage. Small vertical tail fins were added at each trailing edge for control. The cockpit canopy was lightly framed for good vision and the aircraft would have been one of greater dimensions than the Luftwaffe anticipated to be able to house the required large-caliber armament and side-by-side seating for the crew. The undercarriage was to be of a tricycle arrangement with two main legs and a nose leg, all single-wheeled and retractable. The powerplant of choice was 2 x HeS 011 series turbines developing 2,865lbs of thrust each. Other integral systems included radio, search radar, a pressurized cockpit for high-altitude flying and ejection seats for crew survival.

As an offensive-minded night hunter, the NJ-1's armament was centered around cannons. Proposed armament was 2 x 30mm MK 108 cannons in the nose along with 2 x 30mm MK 108 obliquely-mounted (upward-firing) in the fuselage and 2 x 30mm MK 108 cannons in the tail facing rear as a defensive measure. The oblique cannons were of note, allowing the aircraft to fly up under an enemy bomber and fire upon its most vulnerable position. The aircraft was also slated to carry 2 x 1,100lb bombs for night bombing sorties.

Despite not officially selected, the NJ-1 submission was looked over by Luftwaffe officials and found wanting in several key areas: Authorities felt that the engines would not be properly aspirated (leading to lower thrust output than anticipated) being mounted so far aft in the design and with so short a ductwork length for the intake. Additionally, the vertical control surfaces were deemed too small for proper controlling of such a large aircraft.

The design work for the NJ-1 eventually fell to the advancing Soviet forces when the Arado works came under their control outside of Berlin during March of 1945. No physical mockups or prototypes of the night fighter were ever completed, the NJ-1 existing only in its presented paper form.

From these plans, dimensions included a wingspan over 60.4 feet and a length near 43 feet. Estimated empty weight was 22,490lbs with a Maximum Take-Off Weight of 29,100lbs. Performance from the twin engine output was estimated with a cruising speed of approximately 330 miles per hour and a maximum overall speed of 505 miles per hour. Its service ceiling was envisioned to be near 44,625 feet with a rate-of-climb of about 38 feet per minute reported. Range was an optimistic 850 miles.

Values are derrived from a variety of categories related to the design, overall function, and historical influence of this aircraft in aviation history.
Overall Rating
The overall rating takes into account over 60 individual factors related to this aircraft entry. The rating is out of a possible 100 points.
72
Relative Maximum Speed
Hi: 750mph
Lo: 375mph
This entry's maximum listed speed (503mph).