The Focke-Wulf Ta 183 only managed to reach prototype stage before the end of the war in Europe during May of 1945.

Authored By: Staff Writer | Last Edited: 09/14/2017 | Content ©www.MilitaryFactory.com | The following text is exclusive to this site. 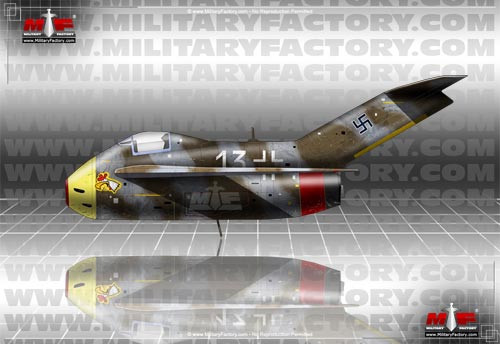 By late in World War 2, German authorities had already made a stout commitment to the production of fighters over bombers. Seeing it that she would be fighting more or less a defensive-minded war for some time to come, models such as the Messerschmitt Bf 109 and Focke-Wulf 190 were evermore the important element to sustaining the German cause. It was therefore no surprise that the emphasis was also later placed on jet-powered fighter designs when the first rocket and turbojet-powered engines were being successfully tested. The Ta 183 design - a fighter design appearing on drawing boards as early as 1942 - was revisited and furthered once another Focke-Wulf fighter project, known simply as "Project VII", was officially rejected by the RLM. However, a pressed Germany meant that the Ta 183 "Huckebein" would only reach the design stage by the end of World War 2 in Europe.

The Ta 183 was intended to supplant all front-line fighters then in Luftwaffe service including the relatively new, first-generation, jet-powered Messerschmitt Me 262 "Schwalbe" and Heinkel He 162 "Volksjager" fighters. The Ta 183 was designed by a Kurt Tank team, led by talented engineer Hans Multhopp, in response to an RLM initiative calling for a highly-capable jet-powered fighter as part of its evolving "Emergency Fighter Program". Tank, serving as a long-time engineering at Focke-Wulf and having proved his worth to the firm, was allowed use of the first two letters of his last name in the designation of several late-war aircraft (to include the production Ta-152 high-altitude fighter, a variant of his successful Fw 190 fighter). However, the war would end before the impressive Ta 183 would even see the light of day - limiting the aircraft to several advanced wind tunnel models for evaluation.

The design of the Ta 183 was quite revolutionary and featured a nose-mounted intake running underneath the bubble canopy cockpit. Swept-back wings of 40 degrees, tricycle undercarriage and an identifiable high-mounted T-tail system were also part of the advanced look. The pilot sat firmly entrenched in a center-positioned cockpit area just aft of the nose intake and above the forward-placed, mid-mounted monoplane wings. The engine - a single Heinkel HeS 011 series turbojet of 3,500lbf - exited just at the base of the empennage. Overall, the design took on a sleek, nimble look with capabilities seemingly limited only by the imagination. The base armament would have been a battery of heavy caliber 4 x Mk 108 series 30mm cannons, all mounted in the nose - capable of attacking fighter or bomber with equal fervor. Ordnance capabilities would have included up to 1,000 pounds of external munitions for the strike fighter role - the centerline fuselage position would have allowed for semi-recessed ordnance while, overall, some five hardpoints could be assigned depending on individual munitions load.
Advertisements

During the initial stages of design, various ideas were taken under consideration including the use of rocket-assisted take-off. Construction was mostly of aluminum, steel sheeting and wood. The design weighed heavily on keeping the aircraft's center of gravity in check though many issues arose during development that would have plagued the aircraft throughout any foreseeable career. A total of two designs were seriously looked into and known as Design II and Design III. The former featured a repositioned undercarriage and subtle changes in design throughout. The latter - and the design eventually selected for competition - saw a slightly-less sweep on the wings and a repositioning of the wing and cockpit.

The Ta 183 design eventually lost out (at least on paper) to a Junkers design (in the form of the EF128). When it was realized that the Ta 183 was in fact the better of the two designs, the Ta 183 was put back on the forefront with prototype and production numbers being seriously considered. This put Kurt Tank and his experts into action on a working model but the end of the war would see an end to all further development - Tank would later take off for Argentina to avoid any type of criminal prosecution for his role in the war.

While in exile in Argentina, Tank took to completing the Hans Multhopp Ta 183 design for the Argentine government. Financial ruin in the country left the nation looking for a budgeted alternative to any new, troublesome and costly designs, thusly settling for the North American F-86 Sabre available in some numbers on the market following the Korean War. To that end, the Ta 183 did see life in the form of the Argentine IAe "Pulqui II" but only five of its type were ever completed by the Fabrica Militar de Aviones. This incarnation of Multhopp's design was viewed largely as a failure with Tank's changes to the initial configuration being largely to blame.

It is also suspected that the Soviet Union's MiG-15 "Fagot" design was inspired by Ta 183 documentation captured from German sources after the war. The aircraft did seem to share an outward similarity but are generally viewed as quite different in most respects. The Swedish SAAB Tunnan is also thought to be inspired by the Ta 183. Regardless, the Ta 183 design itself proved quite an undertaking considering the ambitiousness inherent in the drastic layout and infant jet technology required to power such a design. Though none were wholly-built, its "paper" form can still be thought of as inspiring other designs in its wake.

Incidentally, the designation of "Huckebein" is in reference to a cartoon raven of the time - a character that created mischief for others whenever possible. An applicable designation considering the design goals of the German Emergency Fighter Program.
Advertisements

(Showcased performance specifications pertain to the base Focke-Wulf Ta 183 (Huckebein) production variant. Compare this aircraft entry against any other in our database or View aircraft by powerplant type)
STANDARD:
4 x 30mm Mk 108 cannons in chin/nose position 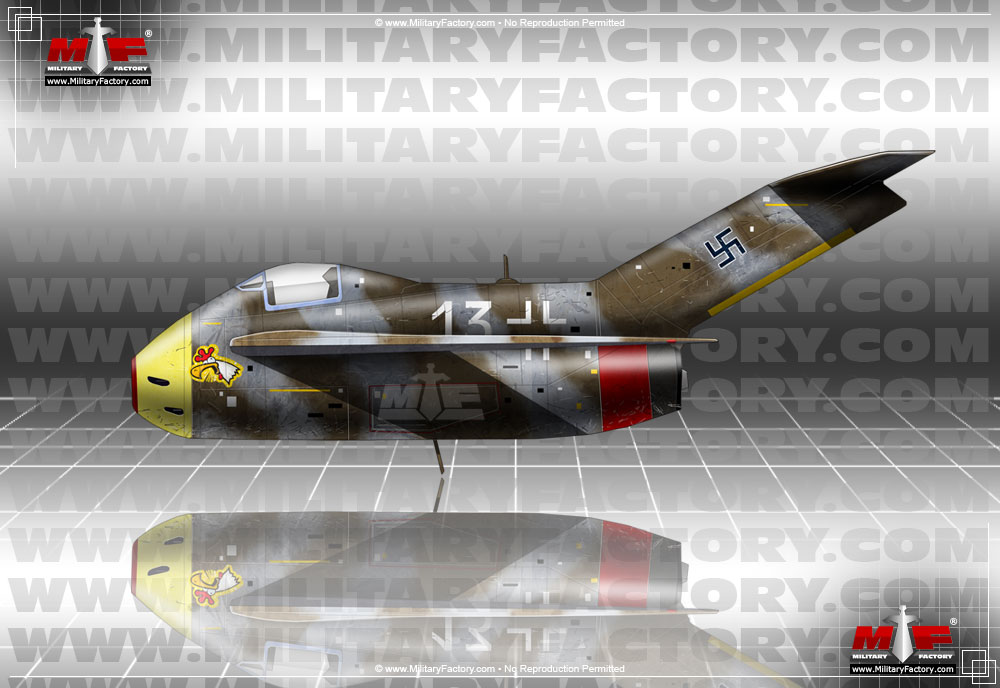