The Dornier Do 215 was originally a German product intended for export - the arrival of the World War 2 officially changed that.

Authored By: Staff Writer | Last Edited: 03/20/2016 | Content ©www.MilitaryFactory.com | The following text is exclusive to this site. 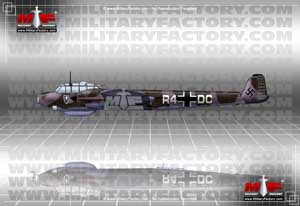 The Dornier Do 215 was originally intended for export, beginning life as a redesignated version of the Dornier Do 17 light/medium bomber. Three prototypes were initially produced from the Do 17K - the V1, V2 and V3 - each with differing powerplants to showcase the aircrafts capabilities to foreign interest. The first was lost during testing while the third proved to be the winning combination. Eighteen completed aircraft were earmarked for use by the Swedish Air Force but the deteriorating political situation in Europe forced these systems to be reinstituted for use by the German Luftwaffe, whom modified three of the batch to suit their specific wartime needs. The remaining fifteen followed suit with new designations, becoming the Do 215B, with full production of the type beginning in December of 1939.

The Do 217 retained much of its visual similarities from the Do 17 bomber including the distinct "pencil" like fuselage. Engines were of inline design powering three-blade propellers and fitted to nacelles under each wing. Wings were mid-mounted monoplanes with rounded edges. The crew compartment was held in the extreme forward portion of the fuselage, complete with extensive glazing around the canopy. Conditions, no doubt, were cramped for the crew of four, consisting of the pilot, bombardier and two machine gunners. The streamlined design ended in a conventional empennage sporting twin vertical surfaces. Armament for the series varied by model type with early forms the aircraft sporting 4 x 7.92mm MG 15 machine guns then later upgrading these to six. The night-fighter version coupled the firepower of 4 x 7.92mm MG 17 machine guns with 2 x 20mm MG FF cannons all held in the nose. The Do 215 could sustain an internal payload of up to 2,200lbs in the bombing role. In the reconnaissance role, the aircraft would be fitted with a series of photo graphic cameras in the bomb bay as needed.

Performance of the base Do 215 B-1 models was supplied by twin Daimler-Benz DB 601Ba Vee 12-cylinder inline piston engines with an output of 1,159 horsepower each. These powerplants, combined with the slim and streamlined airframe, allowed for maximum speeds of up to 292 miles per hour, a normal range of about 1,522 miles and a service ceiling nearing 29,500 feet.©MilitaryFactory.com
Advertisements

The first production form became the eighteen Do 215 A-1's intended for use by the Swedish Air Force. Three of these were refitted (including the FuG 10 navigation system) for use by the German Luftwaffe under the new designation of Do 215 B-0. Likewise, the remaining fifteen of the original Swedish production batch fell under Luftwaffe operation with the designation of Do 215 B-1. The B-models would become the standard production models of the Do 215 series. The Do 215 B-2 were slightly revised Do 215's intended for the photographic reconnaissance role. There aircraft were fitted with three Rb 50/30 series cameras in the bomb bay and a sliding cover under the original bomb bay doors. The Do 215 B-3 was produced in only two examples, essentially the photo-reconnaissance Do 215 B-2's, produced for sale to the Soviet Union - the only two Do 215's not used by Germany. The Do 215 B-4 appeared as an "improved" reconnaissance platform developed from the Do 215 B-2 series models and were equipped with Rb 20/30 and Rb 50/30 series cameras.

Perhaps the most distinct form of the Do 215 became the Do 215 B-5 "Kauz III", a dedicated night-fighter built from Do 215 B-1 and Do 215 B-4 models. These aircraft featured the similar "Kauz II" noses found on the Dornier Do 17 Z-10's, fitted with an IR search light, antenna trees and "Spanner" infrared detection systems. Armament included 4 x 7.92mm MG 17 machine guns along with 2 x 20mm MG FF cannons all housed in the nose. The Spanner infrared detection system was later replaced by the FuG 202 Lichtenstein B/C series radar as the former proved to be of little operational value. Operation of this type ran from January of 1941 through May 1944.

In all, the Do 215 appeared in these major roles with only the reconnaissance and night-fighters making any impact of note for the German Luftwaffe. The aircraft was eventually succeeded by the Dornier Do 217, a medium/heavy bomber and night-fighter appearing from 1940 and onwards (all Do 215's were retired by the end of 1944). Official operators of the Do 215 included Germany, the Soviet Union and Hungary. Like the eighteen Do 215's intended for Sweden, an order of Do 215's to Yugoslavia (placed before the start of the war) were never completed for that country's use.©MilitaryFactory.com
Note: The above text is EXCLUSIVE to the site www.MilitaryFactory.com. It is the product of many hours of research and work made possible with the help of contributors, veterans, insiders, and topic specialists. If you happen upon this text anywhere else on the internet or in print, please let us know at MilitaryFactory AT gmail DOT com so that we may take appropriate action against the offender / offending site and continue to protect this original work.
Advertisements 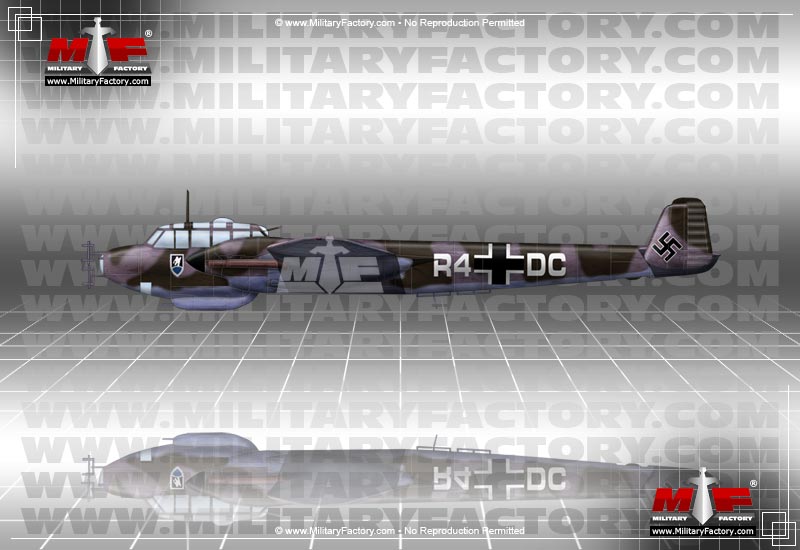 Right side profile illustration view of the Dornier Do 215 nightfighter; color