The MItsubishi Ki-109 heavy fighter was designed to deal exclusively with the threat that the new American Boeing B-29 Superfortress posed to Japan. 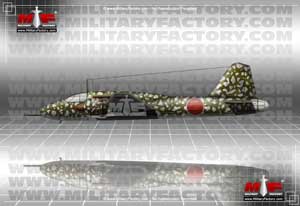 The Mitsubishi Ki-109 was a specialized derivative of the Mitsubishi Ki-67 heavy bomber detailed elsewhere on this site. The Ki-109 was designed specifically to deal with the growing threat posed by the high-attitude American Boeing B-29 Superfortress over the Japanese mainland. As such, the Ki-67 was selected for its adequate performance specs and considered for a new role as a bomber hunter.

Initially, the Ki-109 program was to utilize two Ki-109 aircraft working in conjunction with one version fitted with a searchlight and powerful radar while the other operated with a powerful large caliber weapon. This "hunter-killer" pairing was to work in unison at detecting incoming enemy threats and eliminating them in total darkness. The system, however, proved to be quite complicated and thusly only a single Ki-109 design would emerge, now as a day interceptor, though still mounting a large caliber weapon.

The Ki-109 retained many of the visual qualities of the Ki-67 heavy bomber. Among the chief changes were the lack of much defensive armament and the use of more powerful engines over her predecessor (2 x Mitsubishi Ha-104 series piston engines at 1,900 horsepower). The Ki-109 was defensed by only a single 12.7mm heavy caliber machine gun in the tail. Beyond that, her armament was all-offensive and consisted of a 75mm anti-aircraft cannon in the nose. This system was manually loaded but could be fired with the Ki-109 aircraft still well out of the range of the B-29's defensive machine gun armament.

The new Mitsubishi Ki-109 entered limited production that eventually totaled only some 24 total examples (2 were the day version prototypes). Though maintaining the maneuverability of the Ki-67, the system still proved to lack true high altitude performance that was required of the type. This was basically moot by this point in the war, however, as the American bombers were now conducting low-level nighttime operations for improved accuracy. The Ki-109 - at best - was a stop-gap design that never saw its true operational potential fulfilled. But such was the case when operating from a completely defensive standpoint as the Empire of Japan was by this point in the conflict.
Advertisements

Ki-67 - Bomber Variant on which the Ki-109 is based on.
Ki-109 - Heavy Fighter Bomber Interceptor; fitted with Mitsubishi Ha-104 piston engines of 1,900 horsepower each; 1 x 75mm cannon in nose position and 1 x 12.7mm machine gun in defensive tail gun position; 22 examples produced as armed version only (as in Ki-109b model proposal below).
Ki-109a - Proposed "hunter" version fitted with radar and searchlight to be used in conjunction with "killer" model.
Ki-109b - Proposed "killer" version fitted with heavy armament to be used in conjunction with "hunter" model. 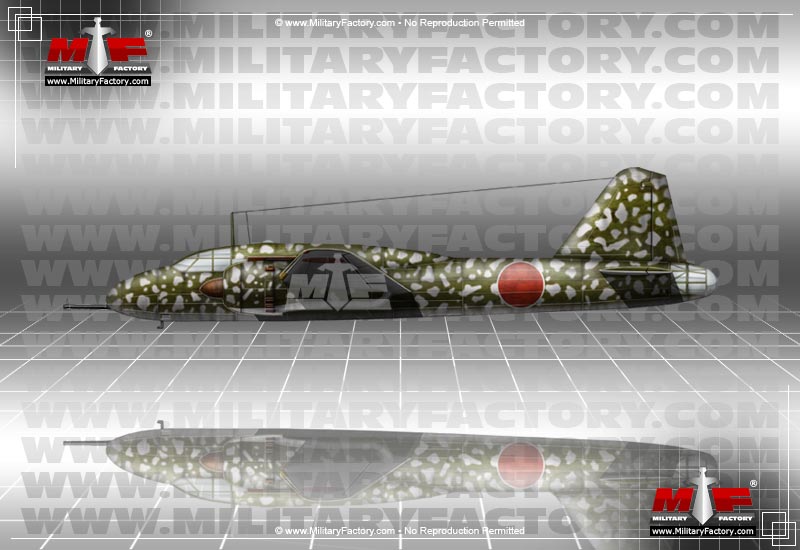