The Gloster Gladiator was already made obsolete by the time of its inception, yet the type soldiered on through 1944.

Authored By: Staff Writer | Last Edited: 04/04/2016 | Content ©www.MilitaryFactory.com | The following text is exclusive to this site. 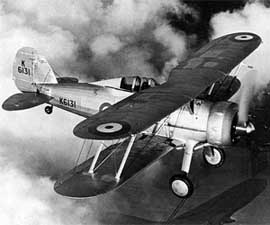 The Gloster Gladiator was a product of the Gloster Aircraft Company and a design of one Henry Phillip Folland. Achieving first flight on September 12th, 1934, the system was officially introduced into Royal Air Force service in February 1937, ultimately seeing service with over dozen different air forces worldwide. The Gladiator was developed from the earlier Gloster Gauntlet and still sported the preceding type's biplane wing appearance but situated the pilot in an enclosed cockpit. While the Gloster Gauntlet held the distinction of being the RAF's last open-air cockpit biplane, the Gloster Gladiator became the RAF's last biplane fighter design overall and, at the same time, the first RAF fighter to feature an enclosed cockpit. Despite its seemingly archaic appearance, the Gladiator still offered up some surprises for the Allies in the early campaigns of World War 2. A total of 747 examples were ultimately produced included 216 for export.

Folland worked on translating the existing Gauntlet for Specification F.7/30 and came up with the SS.37 prototype design as a Gloster Aircraft Company private venture. Exterior design of the new aircraft was a mish-mash of elements from two very different eras of aviation. The type still exhibited the biplane wing arrangement similar to that of the Gauntlet - these showcasing single bays, angled struts and wing assemblies staggered and fitted one over the other. The air-cooled radial piston engine was held at the extreme forward of the tubular fuselage, powering a two-bladed wooden propeller system. The undercarriage was fixed with two main single-wheeled landing gears and a single tail wheel unit. The major difference of the new design was that the pilot sat under a glazed canopy within an enclosed cockpit, offering up decent views all-around though the forward and side views remained somewhat limited by the forward engine placement and biplane wing assemblies. The cockpit featured a raised aerodynamic rear fuselage portion conforming nicely towards the empennage. The tail section itself was conventional for the most part, featuring a single vertical tail fin and applicable horizontal planes to either side. Armament consisted of 4 x .303 caliber Browning-type machine guns with two of these paired on the front fuselage and firing via synchronization through the spinning propeller blades. The remaining two machine guns in the set were fitted to underwing positions on the lower wing assembly. Construction consisted primarily of wood with a canvas covering and was remembered by many-a-Gladiator pilot for her propensity to burn rather quickly when struck by enemy fire.

After three months of evaluation, the RAF officially ordered the type into production in the summer of 1935. Deliveries of the initial Gladiator Mk I model began in July of 1936 leading up to the first operational units by early 1937.

The Gladiator Mk I and its Bristol Mercury IX series engines developed an output of 850 horsepower. A maximum speed of 257 miles-per-hour was possible along with a range of 444 miles and a service ceiling of 33,500 feet. Rate-of-climb was listed at 2,220 feet-per-minute.

Navalized versions inevitably took shape, this coming initially in the Sea Gladiator Interim and, later, the Sea Gladiator proper. The Interim model saw 38 examples produced for the Royal Navy, complete with arrestor hook and reinforced airframes consistent with the rigors of carrier operations. The Sea Gladiator proper came in 60 examples, again for use by the Royal Navy. Arrestor hooks were once again fitted as well as onboard provisions for a dinghy. The Gladiator as a Navy component fared better than her land-based counterparts for her slower speeds proved excellent for landing and taking off from Royal Navy vessels. Additionally, the Sea Gladiator was much less likely to encounter the more potent land-based fighter aircraft of the Germans and Italians out over the open sea.
Advertisements

Belgium-operated Gladiators were no match for German fighter aircraft, losing all 15 of their biplanes in the ensuing battles against the more-modern all-metal German monoplanes. China found modest success against lightly-armored Japanese aircraft in Asia, producing aces in their ranks while becoming very fond of the platform as a fighter. Iraq fielded the type with limited success against other Gladiators piloted by the British with these Iraqi mounts even seeing service after the war. RAF Gladiators fought well against Italian fighters and bombers in the defense of Greece, though Greece itself was eventually lost to the Axis. Gladiators - active at the time of the Battle of Britain - played a limited aggressive role in the campaign.

South Africa enjoyed success with the Gladiator against like-Italian aircraft in East Africa, producing the only 15-kill Gladiator ace in Marmaduke "Pat" Pattle. Pattle himself reached over 50 kills by the end of the conflict, making him the highest-scoring RAF biplane ace of the war. Gladiators saw extensive combat throughout North Africa, where it could spar against its Italian rival in the Fiat CR.42 biplane. The Fiat CR.42 was already a veteran of the Spanish Civil War and her pilots were well-versed in her strengths and limitations. Though the CR.42 was her superior in many ways, the Gladiator none-the-less held her own in multiple combat actions.

In 1940, a small group of British-operated Sea Gladiator Mk Is presented a mythical effort in the defense of the strategically-located island of Malta (then part of the British Empire) in the Mediterranean Sea. The island was under siege and repeatedly a bombing target for German and Italian air elements. The Axis had eventually drawn up plans for a land invasion of the island but the operation (Operation Herkules) was never put into action. Success at Malta eventually played a major Allied role in subsequent victories across North Africa, ultimately kicking the Axis out of the African continent for good, earning the small island nation the title of "unsinkable aircraft carrier" by British Prime Minister Winston Churchill. Gladiators at Malta operated from the RAF airfield known as Hal Far. Though 18 systems were originally based there by way of the Royal Navy's HMS Glorious in 1940, much less that count remained at the time of action.

Gladiators formed an active part of the Norwegian defense against the German Luftwaffe. These Gladiators were piloted by both British and Norwegian airmen. Though Norway eventually capitulated to the German aggressors, the Gladiator no doubt added to its legacy.

Finland received Gladiator Mk I models from Britain to which it utilized with limited success against the Soviet Union in the upcoming Winter War. At least 45 kills were recorded by no less than 22 Finnish pilots. The aircraft type was severely restricted when compared to the mounts being fielded by the Soviet Union. As a result, many Gladiators were utilized as reconnaissance platforms after 1941 and would see constant use through the end of the war in 1945.

As it stood, the Gladiator was a special aircraft in her own right. Though her combat legacy was dwarfed by the modern fighters of her time, she still none-the-less managed to secure a respectable wartime legacy. This was solidified by her use across many fronts and at the hands of many pilots from different nations. In the end, she proved a valuable mount to those pivotal early years of the war and made for herself a history that even today's modern warplanes long for.

The last Gladiator - this in Portuguese service - was retired in 1953.
Advertisements 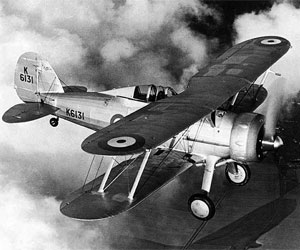 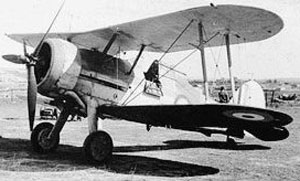 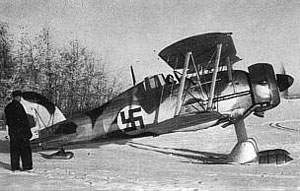 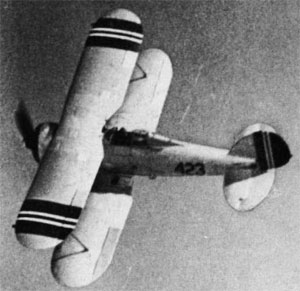