The Macchi C.202 Folgore proved an outstanding fighter design, lacking only proper armament to contend with the new breed of enemy fighters and bombers. 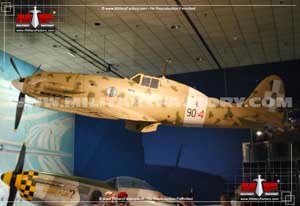 The Macchi C.202 Folgore ("Thunderbolt") served as one of the top Italian-designed fighters during the critical middle years of World War 2. The C.202 series, powered by an inline engine, was a further Macchi development of the radial-engined C.200 Saetta monoplane fighter. The C.202 was instantly improved by way of a license-produced version of the German Daimler-Benz DB 601 series engine with Alfa Romeo handling local Italian production as the RA-1000-RC-411. Alongside the Fiat G.55 "Centauro", the Macchi C.202 "Folgore" proved one of the best Italian fighter designs of the war.

C.202 Origins
The original Macchi C.200 "Saetta" fighter series developed by Macchi engineer Mario Castoldi suffered from an underpowered radial engine, hampering performance and still using an open-air cockpit from a bygone era of flight. As such, Castoldi took to improving his design as early as 1938 while production deliveries began in 1939. However, it would not be until 1940 that a better powerplant became available - the German Daimler-Benz DB 601 A-1 series inline engine - and this was fitted to a base C.200 Saetta body with some modifications to the airframe. The cockpit was now enclosed and the fuselage refined over that of the original model. The wings, undercarriage and tail section were all retained from the original C.200 design. Resulting evaluations shown the new design to be quite promising with excellent performance to boot - proving Castoldi's original design sound just lacking in a suitable powerplant. First flight of the prototype was recorded on August 10th, 1940 and subsequent testing ensued. The new model was shaped under the new designation of C.202 "Folgore" and the Italian government quickly ordered the type into production using an Italian license-built version of the German engine (importing the German engine was a difficult proposition under the ongoing Allied bombing campaign). To facilitate production efforts, both the C.200 and the C.202 were produced side-by-side in Italian factories - the C.202 essentially the direct successor to the C.200.©MilitaryFactory.com
Advertisements

The first production batch of C.202s entered active service with the Italian Air Force in the summer of 1941, serving with the 1st Stormo at Udine. This group moved with their C.202s to operations over Malta out of bases in Sicily November. First combat action for the C.202 occurred in North Africa, also in November. Operational forces ultimately included Italian squadrons based in the Aegean, Italy proper and Russia along the Eastern Front in Russia. The type would soldier on in the post-war world up until 1951.

While the C.200 was underpowered, the C.202 - in its originally fielded production form - itself suffered from being under-armed when compared to her fighter contemporaries. As such, an additional pair of heavy machine guns were later added to the wings (one to each wing) to compliment the pair housed in the upper engine cowling. Additional measures were taken to improve the Folgore's hitting power at later dates including the fitting of underwing machine gun gondolas. Underwing hardpoints were introduced to allow the carrying of bombs or fuel drop tanks.

When in action, the C.202 Folgore reportedly matched up well performance-wise against top-flight performer such as the Supermarine Spitfire Mark V. Where her guns failed her, Folgores could make do with equalized performance from their airframes. Her lack of potent armament always remained a sticking point, proving hardly enough "punch" to bring down enemy fighters let alone marauding Allied bombers.

Like other top Italian fighter mounts of the war - especially those depending on German-based engines for their aerial successes - the Folgore suffered from a shortage of powerplants throughout her tenure, severely holding back quantitative production of this fine system. As such, the C.202 was never grown into any potent numbers during the war, production hitting a ceiling of about 1,200 machines. Most were produced by Breda while Macchi delivered just 392 systems by war's end.

The C.205 "Veltro"
The definitive aircraft in the C.202 family became the C.205 but only 66 of these improved types would become available by the time of the Italian surrender and only six of these were in active service with the Italian Air Force at the time. The C.205 operated under the nickname of "Veltro" (meaning "Greyhound") and was fitted with a more powerful Daimler-Benz DB 605 series engine. The C.205 retained the same basic airframe and undercarriage of the C.202 but improved its armament to 2 x 12.7mm Breda-SAFAT machine guns with 2 x 20mm MG 151 series cannons. The prototype C.205 first flew on April 19th, 1943 and production model deliveries began in mid-1943. These, however, were once again hampered by slow deliveries of the license-produced DB engines. The Germans took over production of the type after the Italian surrender and produced 205 more examples to be fielded across the Fascist-controlled northern territories. About a dozen were also fielded by the Luftwaffe with II/JG 77.

Macchi C.202 Walk-Around
The Macchi C.202 was one of the more pleasing Italian aircraft designs of World War 2. From nose to tail-end, the aircraft was streamlined and contoured to the highest degree. The inline engine sat in a forward compartment powering a three-bladed propeller system. The cockpit was held well back of the nose assembly, providing limited views when taxiing. The cockpit was situated about amidships along the cylindrical fuselage and covered over in a framed, slab-sided canopy with a raised spine - defeating views to the critical "six". The empennage tapered off to a point and held a conventional wing arrangement featuring a single vertical tail fin and mid-mounted horizontal planes. The main wing elements were situated just ahead and below the cockpit and aft of the engine compartment. Wings were straight low-wing monoplanes with rounded tips. Tail surfaces were equally rounded at the edges. The undercarriage was typical of the "tail dragging" breed of aircraft used throughout world war, made up of main landing gear legs and a tail wheel. The single-wheeled main legs retracted inwards towards the fuselage centerline.

Power
Power was derived from a single Daimler-Benz 601 series liquid-cooled supercharged inverted V12 engine delivering upwards of 1,175 horsepower. Of course these were delivered under the Alfa Romeo brand label for localized Italian production. Maximum speed was listed at 372 miles per hour with a service ceiling of 37,730 feet and a range of 475 miles. Rate of climb was measured at 3,563 feet per minute.

Armament
As stated, the C.202 Folgore suffered from being under-armed, putting her just a notch below the celebrated war-winners fielded by other nations. Armament centered around a pair of 12.7mm Breda-SAFAT heavy machine guns in the upper engine cowling with 300 to 400 rounds of ammunition per gun. A second pair of machine guns was featured as single fittings in each wing in later marks. Each of these guns was given 500 rounds of ammunition. Cannon armament was featured in the C.205 design. Once fitted with "plumbed" underwing hardpoints, the Folgore could now make use of a pair of bombs - either 110lbs, 120lbs or 350lbs each bomb. This could be replaced by a pair of fuel drop tanks for increased operational and ferry ranges as needed.

The Post-War Folgore
At least one C.202 was returned stateside to America, specifically to the Wright-Patterson Airfield in Dayton, Ohio for testing. A preserved example of a C.202 is on display at the Smithsonian Air and Space Museum in Washington, D.C. Egypt became a post-war recipient of the C.202 when some thirty-one systems were fitted with the Daimler-Benz DB 605 series engine and delivered as the C.205 Veltro. Eleven such systems followed, these with cannon armament in the wings. Another operator of note became the Independent State of Croatia.©MilitaryFactory.com
Note: The above text is EXCLUSIVE to the site www.MilitaryFactory.com. It is the product of many hours of research and work made possible with the help of contributors, veterans, insiders, and topic specialists. If you happen upon this text anywhere else on the internet or in print, please let us know at MilitaryFactory AT gmail DOT com so that we may take appropriate action against the offender / offending site and continue to protect this original work.
Advertisements

(Showcased performance specifications pertain to the base Macchi C.202 Folgore (Thunderbolt) production variant. Performance specifications showcased above are subject to environmental factors as well as aircraft configuration. Estimates are made when Real Data not available. Compare this aircraft entry against any other in our database or View aircraft by powerplant type)
ORIGINAL:
2 x 12.7mm Breda-SAFAT heavy machine guns in engine cowling. 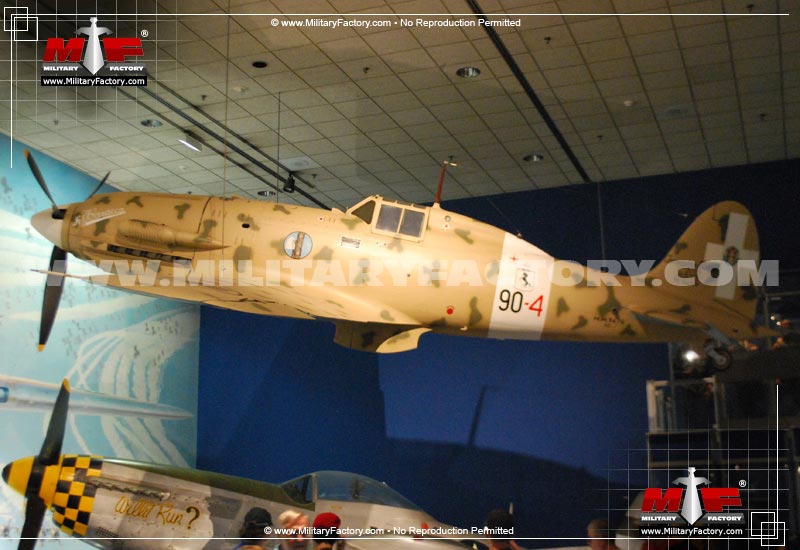 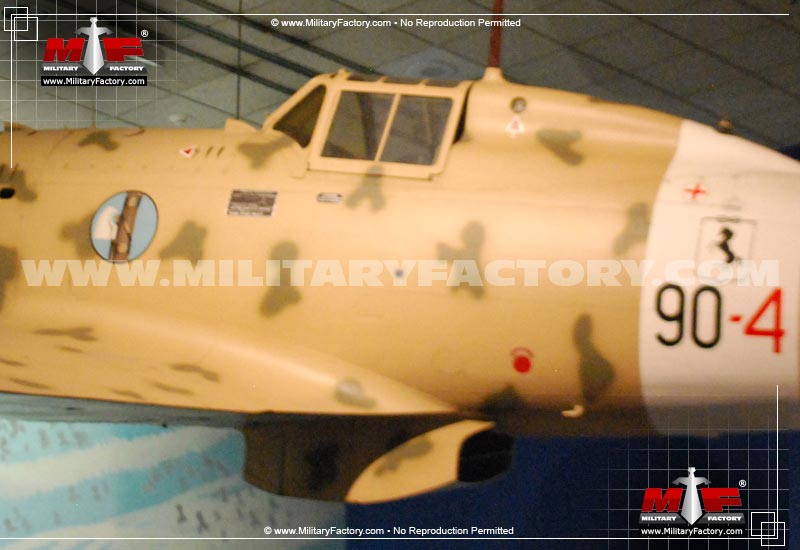 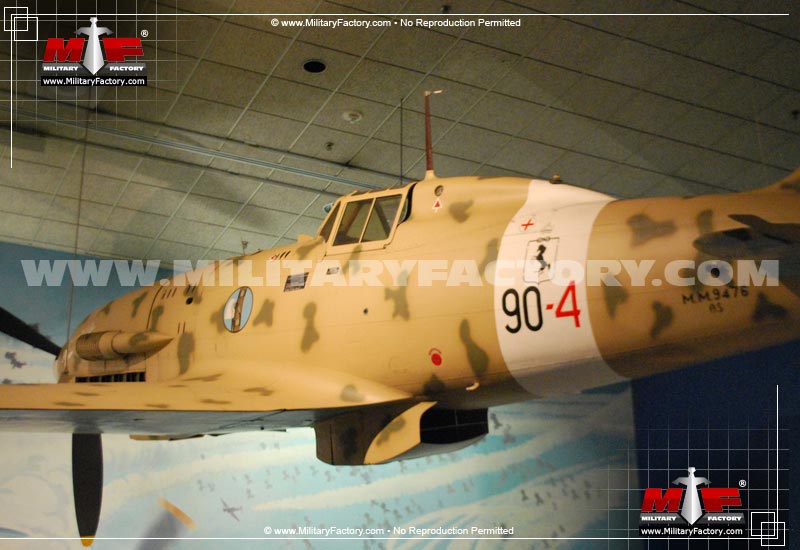 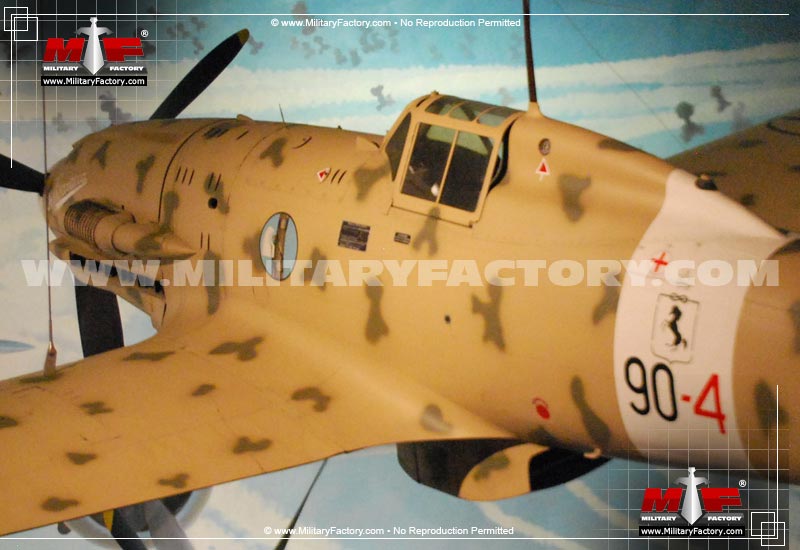 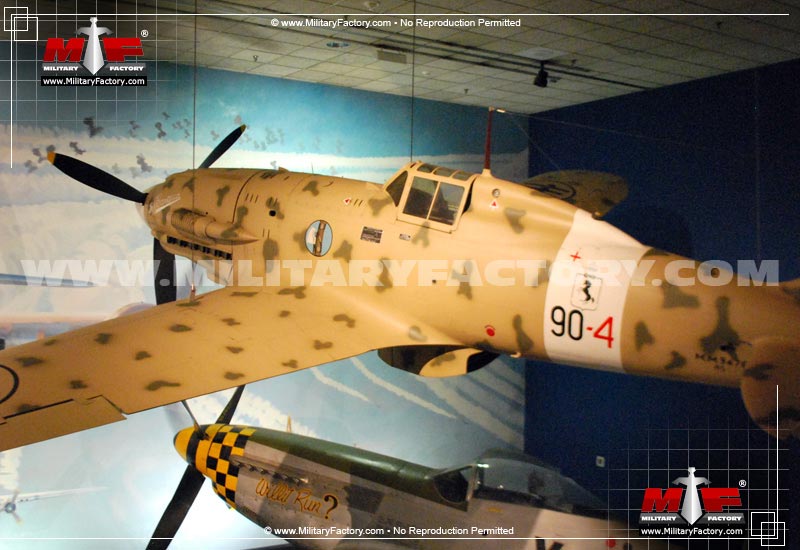 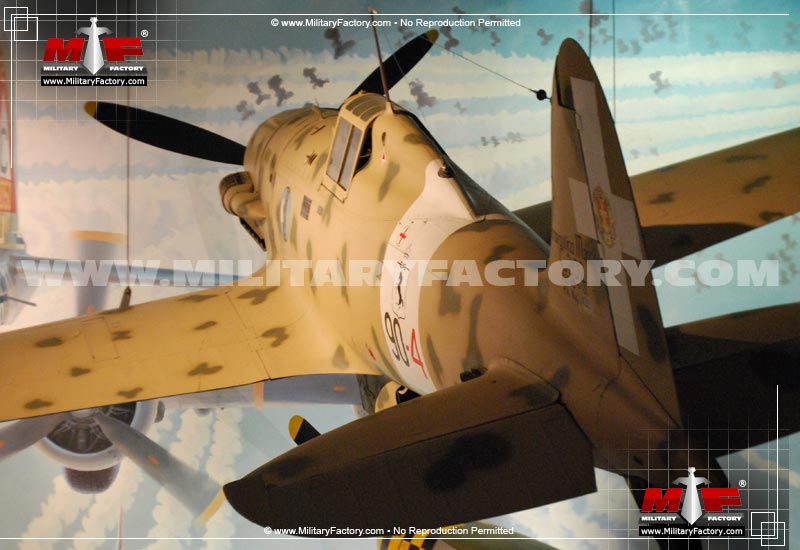 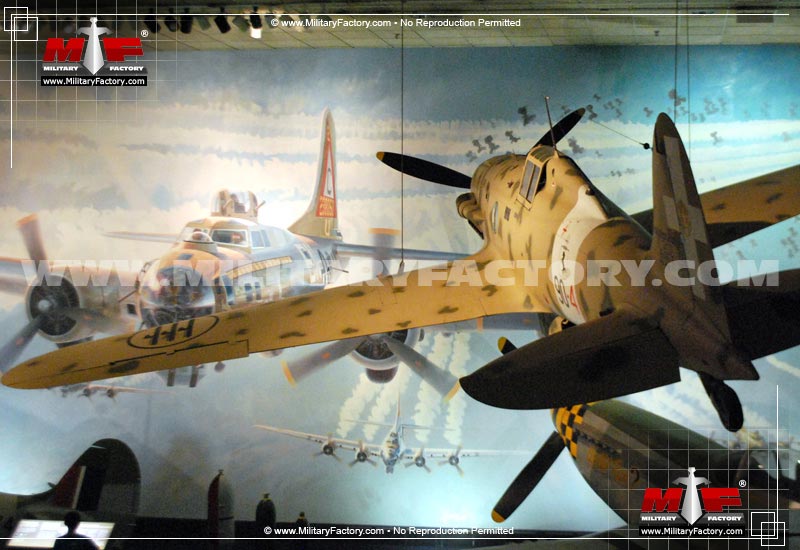 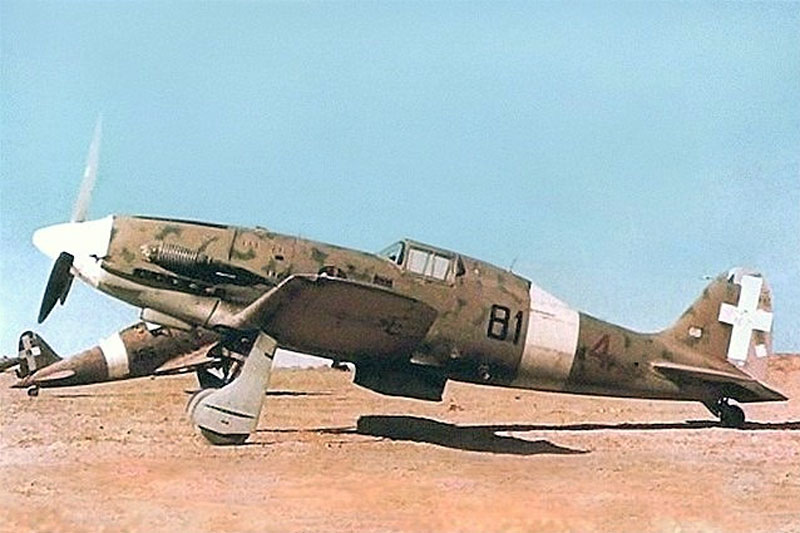 Left side view of the Macchi C.202 Folgore at rest; color
❮ ❯