The Mitsubishi A5M was the precursor Japanese Navy monoplane to the fabled A6M Zero series.

Authored By: Dan Alex | Last Edited: 05/10/2016 | Content ©www.MilitaryFactory.com | The following text is exclusive to this site. 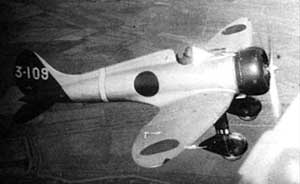 The Mitsubishi A5M (code-named "Claude" by the Allies) became the world's first shipborne monoplane fighter aircraft when it was inducted into service with the Imperial Japanese Navy in 1937. The system served in some capacity up until the end of the war in the summer of 1945 and saw some 1,094 total examples produced in that span. The system was developed into further variants that included the unsuccessful Ki-18 and the experimental Ki-33 but was best known as the official springboard for the fabulous A6M "Zero" design still to come.

The Imperial Japanese Navy delivered a new fighter specification in 1934 calling for an impressive aircraft system capable of 220 miles-per-hour top speed with an excellent climb-rate (interestingly the specification did not include a requirement for ship-borne operations). Though the Mitsubishi and Nakajima firms both produced designs, it was the Mitsubishi firm that got the nod to further their development. The Mitsubishi product became the Ka-14 prototype - of which six total were built, differing in selected powerplants and some design elements - a low-wing monoplane of all-metal construction. First flight of the first prototype (this powered by a Nakajima Kotobuki 5 series radial piston engine of 600 horsepower) was on February 4th, 1935 and sported inverted gull wings which posed some handling issues. The second prototype, featuring a new conventional wing design, became the production A5M after flight testing exceeded all specification expectations (hitting speeds of 280 miles per hour, well above that as required in the initial specification). The revised Ka-14 fitted the Nakajima Kotobuki 2 KAI I engine of 585 horsepower. The system became operational in the Imperial Japanese Navy ranks in the early part of 1937 as the A5M1. Production was handled by Mitsubishi, Watanabe and the Naval Ohmura Arsenal.

To save on weight, the undercarriage featured two fixed main landing gears housed in streamlined fairings. The aerodynamic fuselage was of a tubular shape covered over in flush-riveted aluminum skin and tapering off into the empennage all the while sporting a small cross-section. Wings were low-fitted to the front of the airframe and featured rounded wingtips. The pilot sat well-forward in the design, just aft of the engine compartment, in an open-air cockpit covered only by a windscreen to his front and a raised fuselage spine to his rear. This being a navy aircraft, the A5M was fitted with an arrestor hook and could also sport a centerline fuel drop tank for increased range over water. The design was capped off by a conventional empennage with applicable tail surfaces. Armament was adequate for the time of the A5M's inception into service, this being a pair of 7.7mm Type 97 machine guns fitted into the fuselage. Other than that, Claude has little else to offer in terms of offensive punch.
Advertisements

In this part of the world, the A5M was actually responsible for the first monoplane-versus-monoplane air battles in history, this being between the Japanese and the Chinese in the 2nd Sino-Japanese War. A5M's squared off against American-made Boeing P-26 "Peashooters" in the ensuing action. Before the arrival of the A5M, Japanese airmen were at the mercy of their Chinese counterparts, suffering an inordinate amount of losses with little to show for it. The A5M soon returned air superiority back into Japanese hands in a short time becoming the Empires most important asset of the war. Peashooters were of similar design with their open-air cockpits, radial piston engines and static faired-over undercarriages. Unfortunately got the Peashooters and their Chinese airmen, the A5M proved the superior breed Beyond the Soviet-made Polikarpov I-16s, the A5Ms had little competition for the moment. Beyond that, the A5M served on through the Battle of Coral Sea to which they were, by now, replaced by the A6M "Zeroes" in number and inherent usefulness. As a second-line fighter, they fit the bill perfectly when called to action as kamikaze suicide implements in the waning months of World War 2 while also becoming the mounts of choice for fighter training of a new generation of Japanese airmen.

While the Ka-14 represented the first six prototypes, the A5M1 became the first production model for the Navy, fitting the Kotobuki 2 KAI radial engine of 850 horsepower. This was followed by the improved (though essentially same)A5M2 and A5M2a with Kotobuki 3 series engines of 640 horsepower. The A5M2b, developed from Japanese experience in combat against the Chinese, featured a new streamlined engine cowling over its Kotobuki 3 series radial engines of 640 horsepower and an enclosed greenhouse-style cockpit. This new cockpit proved quite unpopular with Japanese airmen when in practice and was dropped in mid-production. The A5M3a became several prototypes testing the Hispano-Suiza 12 Xcrs series engines of 601 horsepower.

The A5M4 was based on the A5M2b but fitted a different engine and became the definitive Claude. Additionally, these A5Ms were modernized a bit with the addition of an enclosed cockpit. A 35-gallon drop tank was now added for improved ranges and this production series eventually saw use of the Nakajima Kotobuki 41 KAI series 9-cylinder radial piston engine. The engine was rated at 785 horsepower and allowed for speeds of up to 273 miles per hour. Range was listed at 746 miles while a service ceiling of up to 32,150 feet was possible. The A5M4 entered service in 1938 and was quickly fielded against the Chinese for a final death blow. The A5M4 was branched into a two-seat trainer as the A5M4-K of which some 103 were produced by the Naval Ohmura Arsenal.

Imperial Japan
(OPERATORS list includes past, present, and future operators when applicable)
✓ Air-to-Air Combat, Fighter
General ability to actively engage other aircraft of similar form and function, typically through guns, missiles, and/or aerial rockets. ✓ Maritime / Navy
Land-based or shipborne capability for operating over-water in various maritime-related roles while supported by allied naval surface elements. ✓ Training (General)
Developed ability to be used as a dedicated trainer for student pilots (typically under the supervision of an instructor).

(Showcased performance specifications pertain to the Mitsubishi A5M4 (Claude) production variant. Compare this aircraft entry against any other in our database or View aircraft by powerplant type)
STANDARD:
2 x 7.7mm Type 97 machine guns in upper engine sides of fuselage. 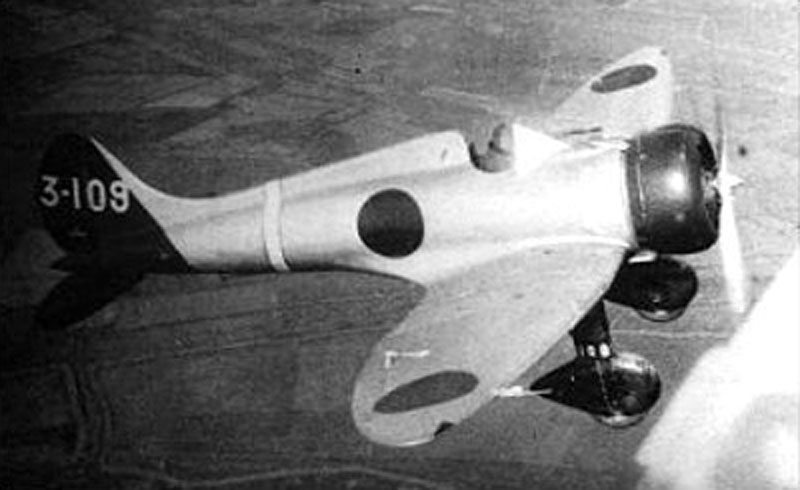 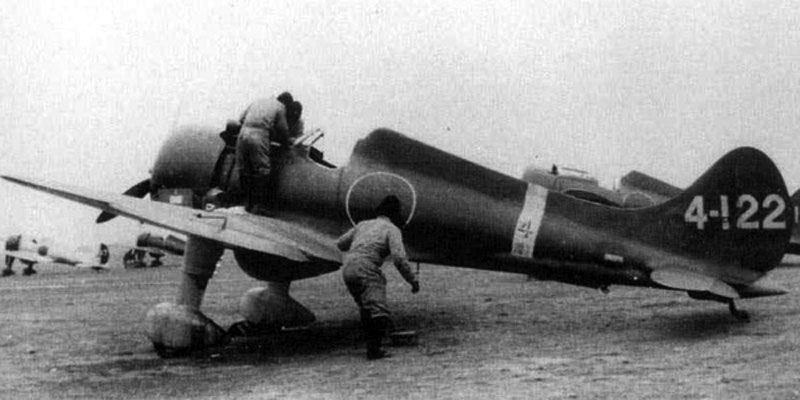 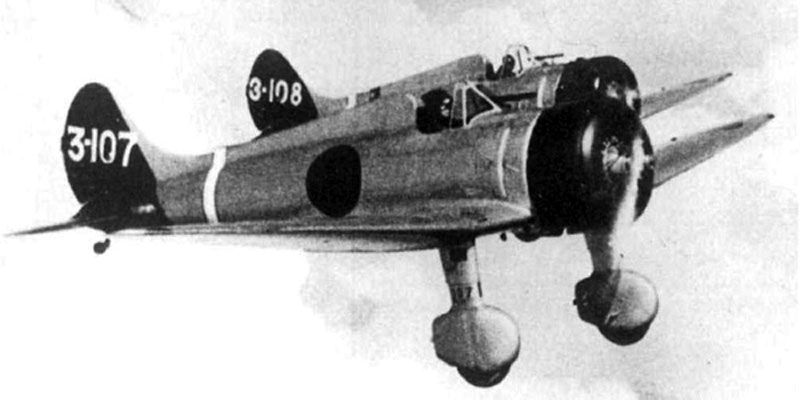 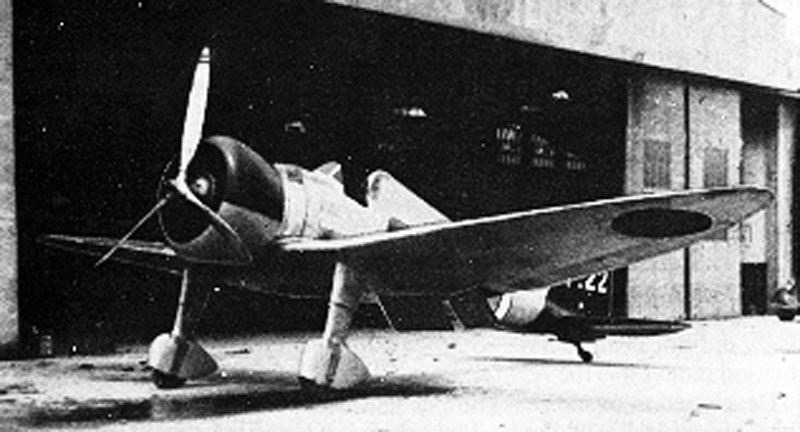 Front left side view of a Mitsubishi A5M Claude at rest
❮ ❯