The CAIC Z-10 is a dedicated Chinese military attack helicopter in the same class as the Denel Rooivalk, Eurocopter Tiger and AgustaWestland Mangusta.

Authored By: Staff Writer | Last Edited: 02/18/2022 | Content ©www.MilitaryFactory.com | The following text is exclusive to this site. 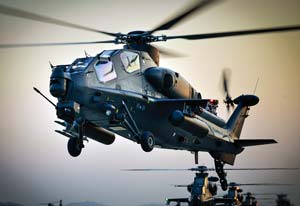 The CAIC Z-10/WZ-10 (Changhe Aircraft Industries Corporation / Wuzhuang Zhisheng) is a modern battlefield attack helicopter of the People's Republic of China Army (Chinese Army). It is intended to directly counter the threat as posed by enemy armor in a number of scenarios utilizing advanced technologies and guided munitions as well as indigenous armament types. The helicopter is produced by Changhe Aircraft Industries Corporation (CAIC) of China and, in March of 2013, it was revealed that the Chinese had considerable assistance from the Russian Kamov helicopter firm in developing the base Z-10 model. The Z-10 stands as the first indigenous Chinese attack helicopter design of note.

The Z-10 is a departure for the Chinese who, until this time, were relying heavily on modified (armed) transport types to shore up their anti-armor limitations. This spurred development of both an in-house attack helicopter solution (in keeping pace with other global powers) and an indigenous anti-armor missile system. Design work actually began as early as 1979 and modern conflicts only hurried the requirement along, particularly the armor-heavy clashes of the 1991 Persian Gulf War which showcased all manner of modern technology to soundly defeat a quantitative foe. 602nd Research Institute headed localized development of the new helicopter components utilizing complete 3D computer work.

The end product became the Z-10 with its two-man stepped cockpit arrangement similar to other modern types such as the Hughes AH-64 Apache of the American Army. The weapons officer sits in the frontal cockpit with the pilot in the rear with a commanding view of the battlefield ahead. Pilot controls are made redundant in case of incapacitation of one of the crew. Tracking and engagement systems are housed in a positional nose assembly as in the AH-64 and a chin-mounted turret houses the standard cannon armament. The fuselage is slim which promotes a very tight forward profile and fits a pair of turboshaft engines high in its configuration. The turboshaft engines power a five-bladed main rotor assembly fitted low on the fuselage top and a pair of two-bladed tail rotor units. The empennage is set low in the design with a conventional tail rotor offset to the starboard side. The tail rotor sits atop a tall vertical tail fin. At its base are a pair of horizontal stabilizers. Armament for the Z-10 is fitted along two short wingstubs as in the AH-64 with two hardpoints each. The undercarriage is fixed and consists of two single-wheeled main legs and a single-wheeled tail leg.

Performance for the Z-10 is brought about by 2 x WZ-9 series turboshaft engines developing 1,350 shaft horsepower each, based on a Pratt & Whitney Canada civilian design (PT6C-67C) found on other Chinese helicopters. Pratt & Whitney Canada is known to have supplied the Chinese with the available software to convert these civilian powerplants into military-grade systems. This supplies the mount with a top speed of over 300 kmh and a service range of over 800 kilometers. A reported service ceiling of 6,400 meters is listed. The vehicle stands at 3.85 meters tall with a rotor diameter of 13 meters and running length of 14 meters. The WZ-9 engines are completely assembled in China with no reliance on foreign assistance. The transmission was completed with assistance from the British-Italian concern of AgustaWestland.©MilitaryFactory.com
Advertisements

The US government went on to fine United Technologies Corporation (parent company to Pratt & Whitney Canada and Hamilton Sundstrand (provider of the full-authority digital control software)) $75 million USD for their roles in assisting a foreign party while under the strict US export rules. Regardless, the damage has been done and the Chinese retain a viable turboshaft solution for their new attack helicopter.

The Z-10 is primarily fitted with a 23mm autocannon in its turret which can be replaced by the optional 30mm fitting, 30mm/40mm automatic grenade launcher or a 14.5mm heavy-class Gatling minigun. Across the four available hardpoints can be fitted various air-launched munitions including the HJ-8 anti-tank wire-guided, HJ-9 anti-tank, HJ-10 anti-tank, TY-90 air-to-air, PL-5 short-range air-to-air, PL-7 air-to-air and PL-9 short-range air-to-air missiles. As with other attack helicopters of this class, the Z-10 is cleared to carry rocket pods and these arrive in 57mm or 90mm unguided forms.

All told, the Z-10 is believed to be in the same attack class as the Eurocopter Tiger and Denel Rooivalk systems of Europe and South African respectively. It recorded its first flight on April 29th, 2003 and entered service in December of 2010. Some 60 are believed to be in service or on order at this time (2013).

For years, the Chinese denied foreign assistance on their Z-10 design though it was disclosed in March of 2013 that the government approached Kamov for its support in design in 1995. The program was then known under the designation of "Project 941" during its development before the Chinese took the charge and ran with it to produce the finalized Z-10.

December 2015 - Pakistan has received three Z-10 helicopters for trials and evaluation. It was reported that the nation planned to buy some seventeen of the type.

China; Pakistan
(OPERATORS list includes past, present, and future operators when applicable)
✓ Ground Attack (Bombing, Strafing)
Ability to conduct aerial bombing of ground targets by way of (but not limited to) guns, bombs, missiles, rockets, and the like. ✓ Close-Air Support (CAS)
Developed to operate in close proximity to active ground elements by way of a broad array of air-to-ground ordnance and munitions options.

(Showcased performance specifications pertain to the CAIC Z-10 production variant. Compare this aircraft entry against any other in our database or View aircraft by powerplant type)
STANDARD:
1 x 23mm OR 30mm cannon in chin mounting OR 30mm/40mm automatic grenade launcher OR 14.7mm Gatling gun.

General Assessment
Firepower
Performance
Survivability
Versatility
Impact
Values are derrived from a variety of categories related to the design, overall function, and historical influence of this aircraft in aviation history.
Overall Rating
The overall rating takes into account over 60 individual factors related to this aircraft entry.
74
Rating is out of a possible 100 points.
Relative Maximum Speed
Hi: 200mph
Lo: 100mph
This entry's maximum listed speed (186mph). 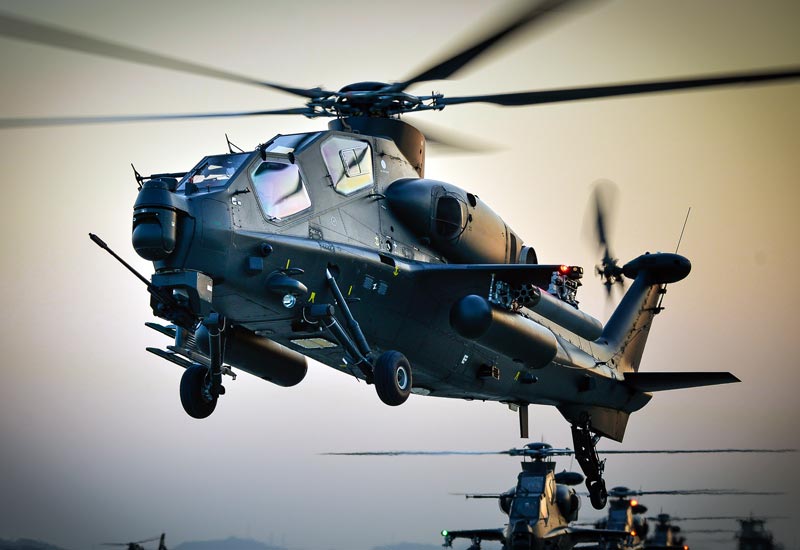 Image from the Chinese Ministry of Defense.
2 / 5 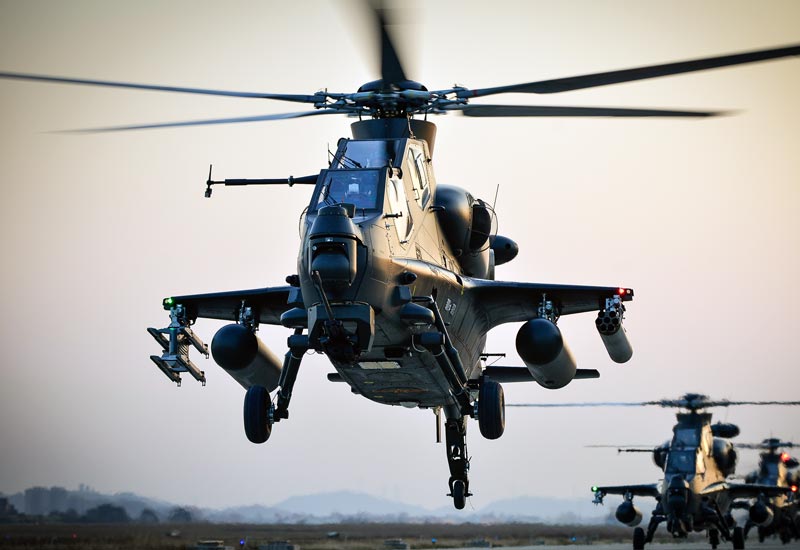 Image from the Chinese Ministry of Defense.
3 / 5 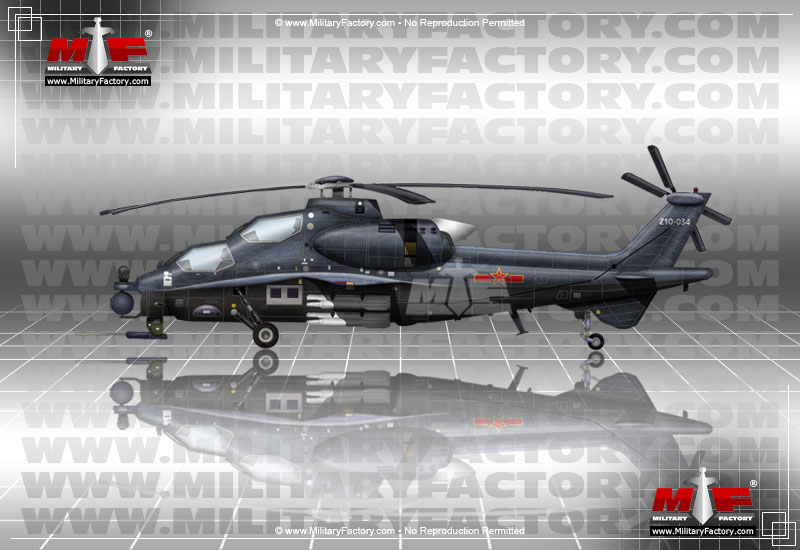 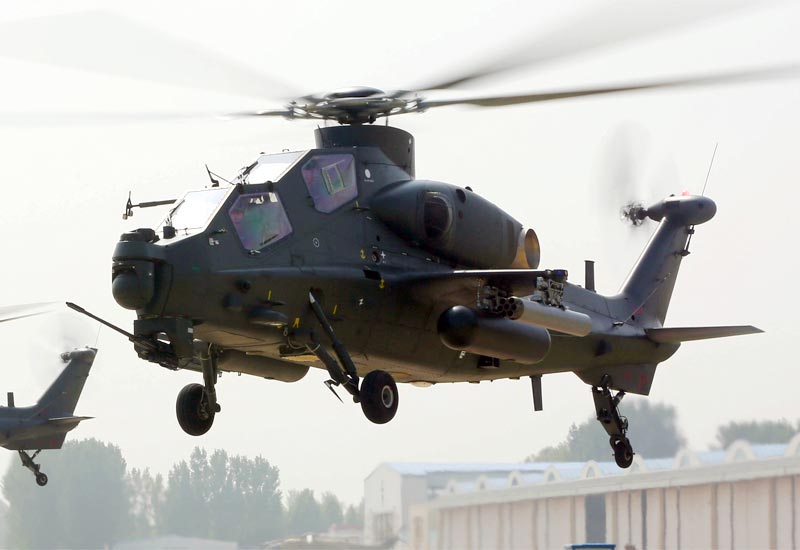 Image from the Chinese Ministry of Defense.
5 / 5 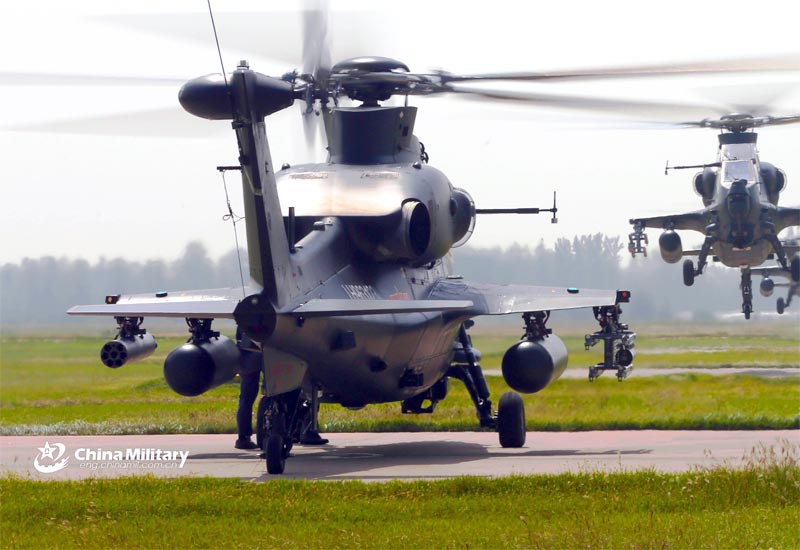 Image from the Chinese Ministry of Defense.
❮ ❯