Authored By: Staff Writer | Last Edited: 12/03/2022 | Content ©www.MilitaryFactory.com | The following text is exclusive to this site. 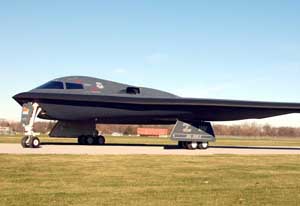 The Northrop Grumman B-2 "Spirit" (generically referred to as the "Stealth Bomber") became the pinnacle of tail-less flight design that began in the mind of Northrop founder, Jack Northrop. Not only was the B-2 groundbreaking in its use of a tail-less approach, but the aircraft was designed from the outset with radar-evading/absorbing "stealth" capabilities in mind, generating a small heat signature and slim profile that incorporated body-coating materials. This would allow the bomber to infiltrate enemy airspace, hit vital targets against an unsuspecting enemy with precision weapons, and leave the area undetected - forming the spearhead of an assault that was to lead the way for additional waves of "non-stealth" aircraft to finish the job. The first-strike capability had become an essential facet of warfare in the 21st century and - as shown in the war in Kosovo through Allied Force - the B-2 would not disappoint once in service.

Developed as early as the 1970's the B-2 was not unveiled until 1988. It would be 1989 before the aircraft would see its first flight and, from then on, the "Spirit" would be charged with succeeding the Rockwell B-1B "Lancer", a high-speed, low-altitude penetrator utilizing powerful engines and a "swing-wing" design approach to fulfill its bombing role. Armed with the potent APQ-181 series radar suite, the B-2 Spirit has become a capable delivery platform where pin-point strikes against hardened targets are the call of the day.

From above, the B-2's body showcases a "double-W" shape. Vertical tail surfaces are non-existent and the large delta wing planform provides basic lifting while maneuverability and control is made possible by advanced onboard computer processing systems that were hard to come by in Northrop's earlier "flying wing" attempts. This measure of ability is not to be underscored as the basic flying wing presents many stability issues that were to be ironed out before the flying wing concept could be largely realized in a viable form. To put the importance of this advancement into context, the previous flying wing attempts of Northrop had a deadly tendency to stall and - in some cases - resulted in death to the test crew. The onboard systems of the B-2 reportedly do not let the aircraft stall, thus eliminating any piloting mistakes that could lead to a disastrous loss of the aircraft, its sensitive flight technology, and life of the two pilots.

The wind-tunnel-friendly profile of the B-2 shows off a low-profile design. Engines are housed in blended nacelles on either side of the blended cockpit section. The crew benefits on longer missions by the installation of a lavatory and sleeping accommodations installed just behind the cockpit. The large wing area of flying wings serves many beneficial purposes to mission capabilities (though at the expense of drag) - additional fuel stores can be integrated and internal weapons bays can be used to conceal ordnance, the latter quality helping to reduce the radar signature of the aircraft.©MilitaryFactory.com
Advertisements

132 B-2 bombers were originally planned for procurement but ballooning program costs (the B-2 program cost well over $45 billion dollars to fund with a single B-2 costing about $1.2 billion dollars) and the end of the Cold War substantially reduced those figures to just 21. This end production total also included six developmental aircraft which were later all upgraded to full operational standard. The first B-2 bomber groups was formed in 1999 with the last aircraft delivered from the production lines in 1998. The series was to replace the B-52 Stratofortress line though both bombers have been retained in USAF service in addition to sixty or so of the Rockwell/Boeing B-1B Lancer series.

The B-2 saw its first taste of action in the war over Kosovo during 1999 and, later, over Afghanistan in the 2001 U.S.-led invasion. The aircraft was successful with its pinpoint strikes using JDAMs and GPS-guided munitions. To showcase the aircraft's amazing endurance, missions to Europe and the Middle East originated from locations within the United States (Missouri is the home state of the B-2 flight group) and helped along by in-flight refueling. Before he passed, Northrop founder Jack Northrop himself was able to see the B-2 as it lay under development in its still-classified form - seeing the realization of his flying wing dream. Today the B-2 - though limited by available numbers - provides the United States with a lethal first-strike / first-kill capability unmatched throughout the world.

On February 22, 2008, the first reported accident of a stealth bomber was reported when a B-2 Spirit crashed shortly after takeoff in Guam while on support of western-Pacific operations. Both pilots ejected safely but the incident resulted in the grounding of the other three B-2's present at the airbase. Investigation revealed that humidity had built up on several of the B-2's sensors, distorting pre-flight checks leading to the accident.

The original B-2A was since been upgraded with Extremely High Frequency (EHF) SATellite COMmunications (SATCOM) equipment and broader support for more advanced precision drop ordnance. Communications and the aircraft's stealth body coating have also been addressed as has reducing maintenance times and cost.

Of the 21 B-2As procured, nineteen of these are operationally available to the USAF. A sole example is used in the research and development role to further other programs. The series is expected to remain in frontline service into the late 2050s.©MilitaryFactory.com
Note: The above text is EXCLUSIVE to the site www.MilitaryFactory.com. It is the product of many hours of research and work made possible with the help of contributors, veterans, insiders, and topic specialists. If you happen upon this text anywhere else on the internet or in print, please let us know at MilitaryFactory AT gmail DOT com so that we may take appropriate action against the offender / offending site and continue to protect this original work.

February 2018 - The B-2 Spirit fleet is set to be directly succeeded by the in-development B-21 stealth bomber by Northrop Grumman.

July 2018 - A B-2A bomber was used to test the viability of a B61-12 nuclear gravity bomb over the Tonopah Test Range in Nevada.

October 2019 - Northrop Grumman is to begin testing a single example of a modernized B-2 stealth bomber with the new Defensive Management System - Modernization (DMS-M) equipment in place. Upgrades include a new instrument panel in the cockpit, improved digital processing, new antenna fits, and a strengthened Electronic Support Measures (ESM) unit.

United States
(OPERATORS list includes past, present, and future operators when applicable)
✓ Ground Attack (Bombing, Strafing)
Ability to conduct aerial bombing of ground targets by way of (but not limited to) guns, bombs, missiles, rockets, and the like.

COUNTERMEASURES Survivability enhanced by way of onboard electronic or physical countermeasures enacted by the aircraft or pilot/crew.
MULTI-ENGINE Incorporates two or more engines, enhancing survivability and / or performance.
WING SWEEPBACK Mainplanes, or leading edges, features swept-back lines for enhanced high-speed performance and handling.
INTERNAL BAY Fuselage volume includes space for internally-held weapons or special-mission equipment.
HIGH-ALTITUDE PERFORMANCE Can reach and operate at higher altitudes than average aircraft of its time.
EXTENDED RANGE PERFORMANCE Capability to travel considerable distances through onboard fuel stores.
PILOT / CREW EJECTION SYSTEM Assisted process of allowing its pilot and / or crew to eject in the event of an airborne emergency.
CREWSPACE PRESSURIZATION Supports pressurization required at higher operating altitudes for crew survival.

(Showcased performance specifications pertain to the Northrop Grumman B-2A Spirit production variant. Performance specifications showcased above are subject to environmental factors as well as aircraft configuration. Estimates are made when Real Data not available. Compare this aircraft entry against any other in our database or View aircraft by powerplant type)
Mission-specific ordnance can include any of the following held in two internal bomb bays (40,000 lb overall limit):

General Assessment
Firepower
Performance
Survivability
Versatility
Impact
Values are derrived from a variety of categories related to the design, overall function, and historical influence of this aircraft in aviation history.
Overall Rating
The overall rating takes into account over 60 individual factors related to this aircraft entry.
94
Rating is out of a possible 100 points.
Firepower Index (BETA) 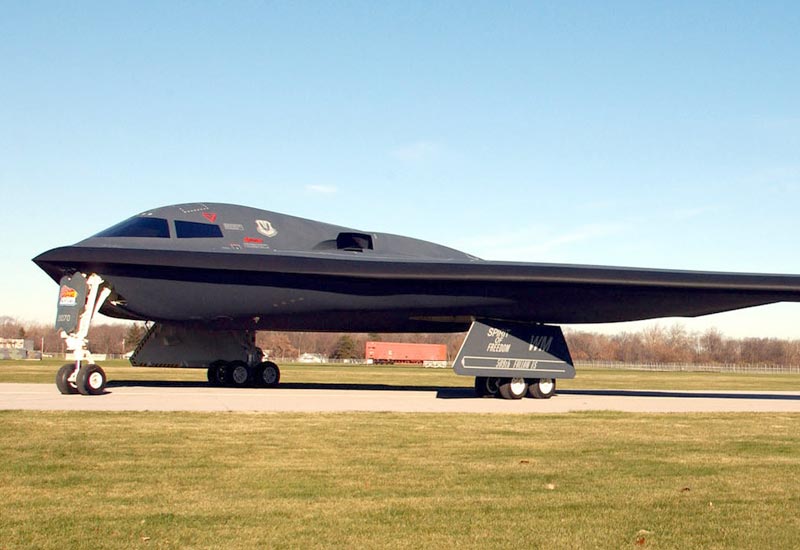 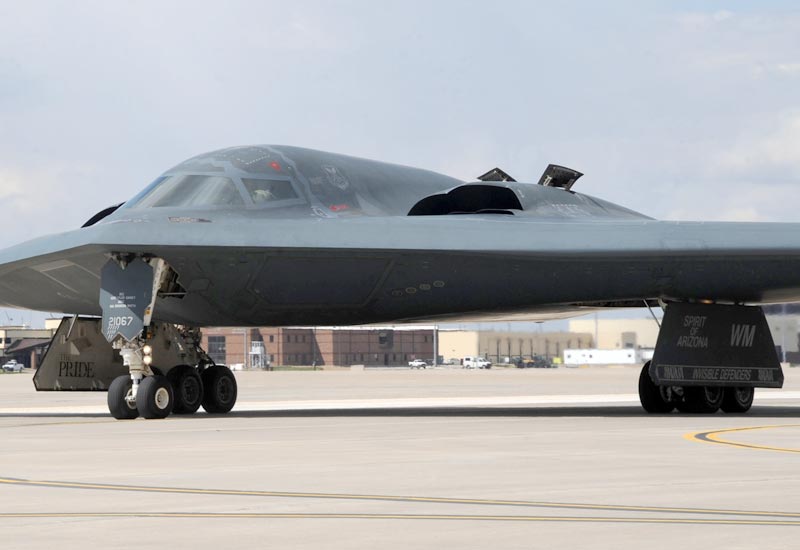 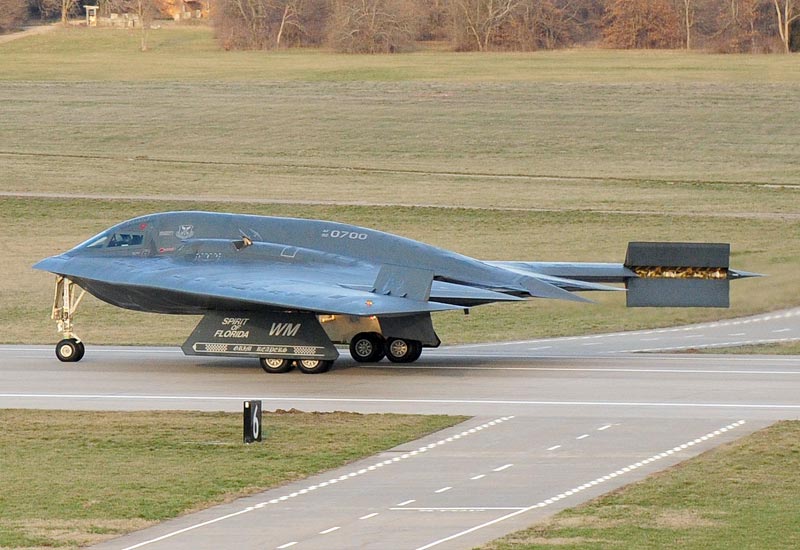 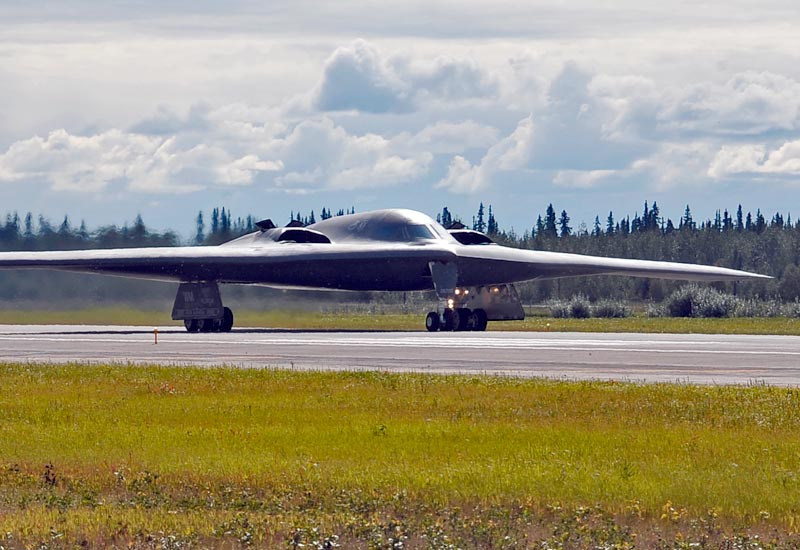 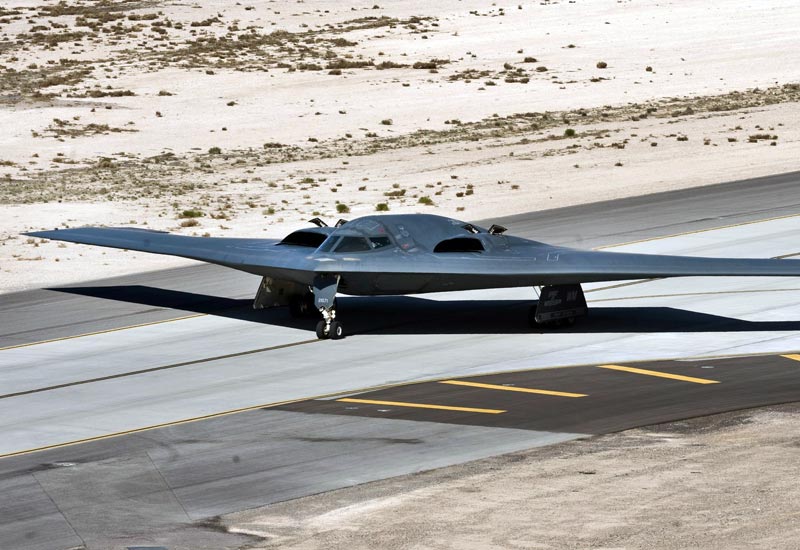 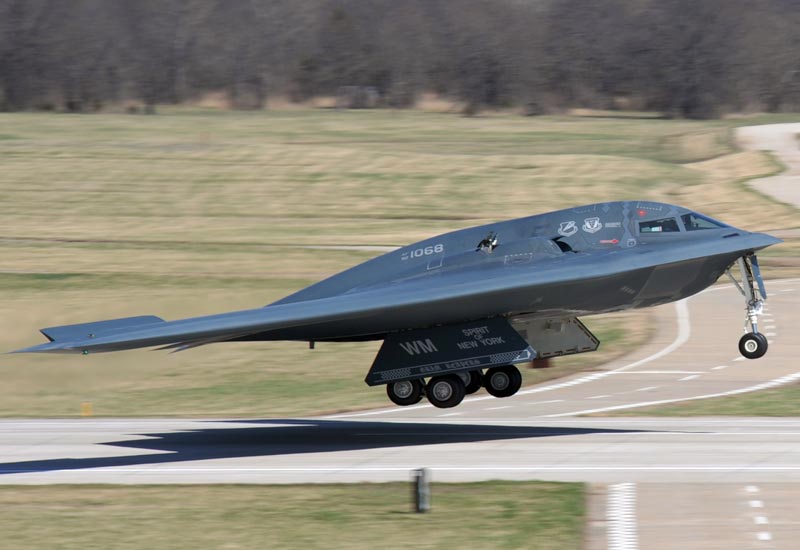 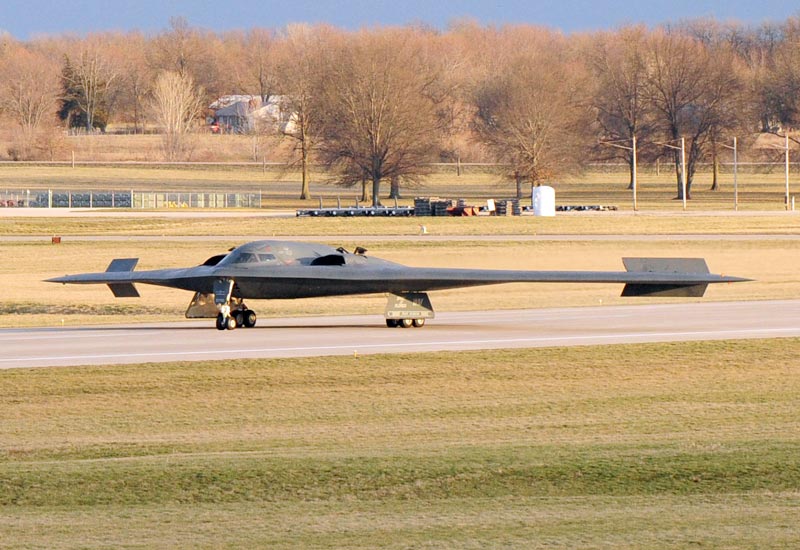 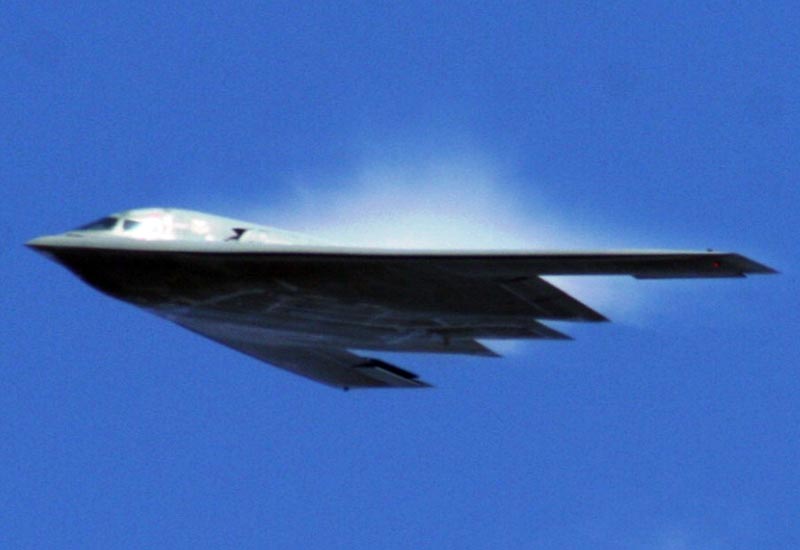 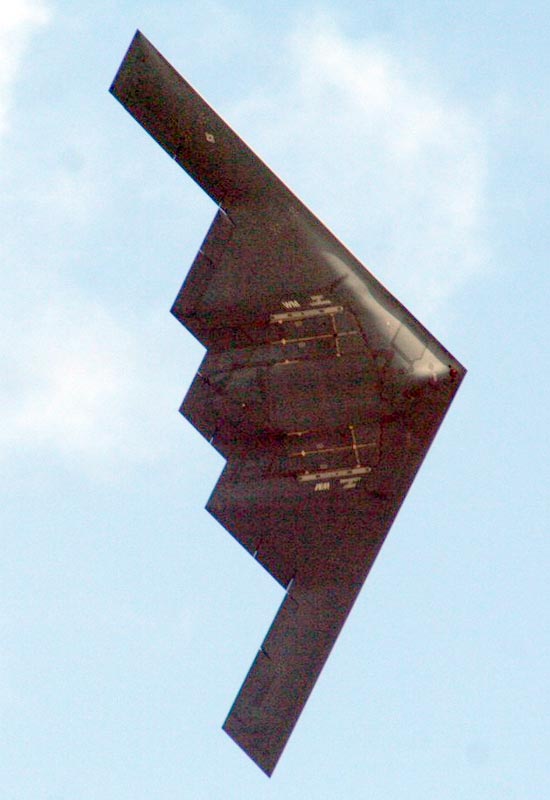 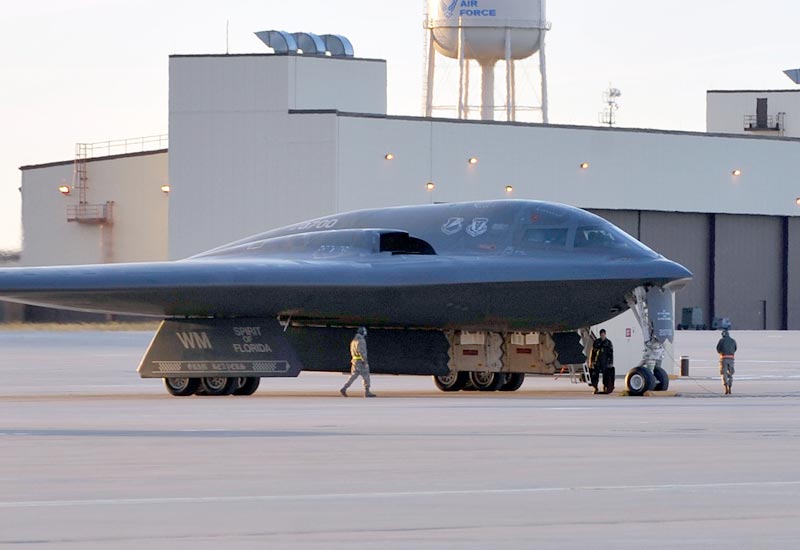 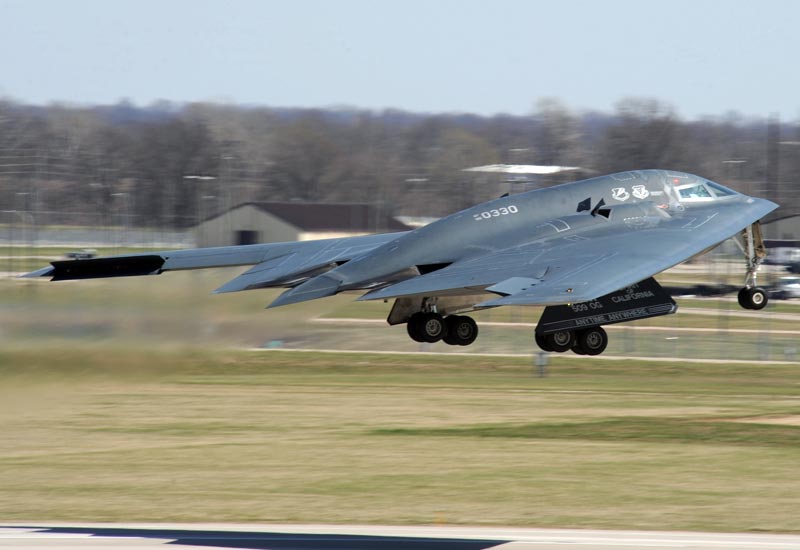 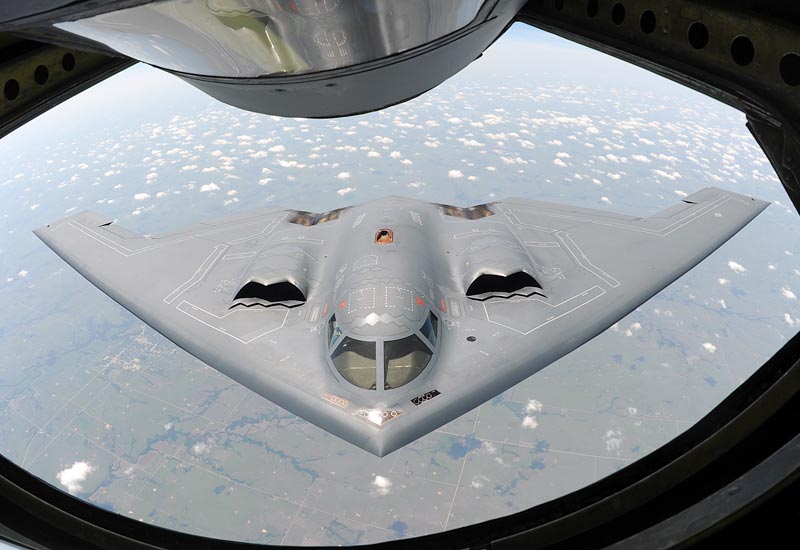 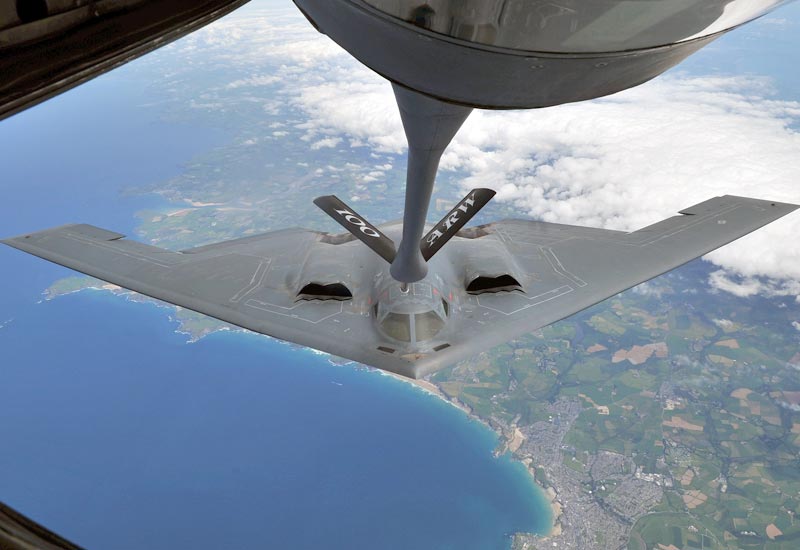 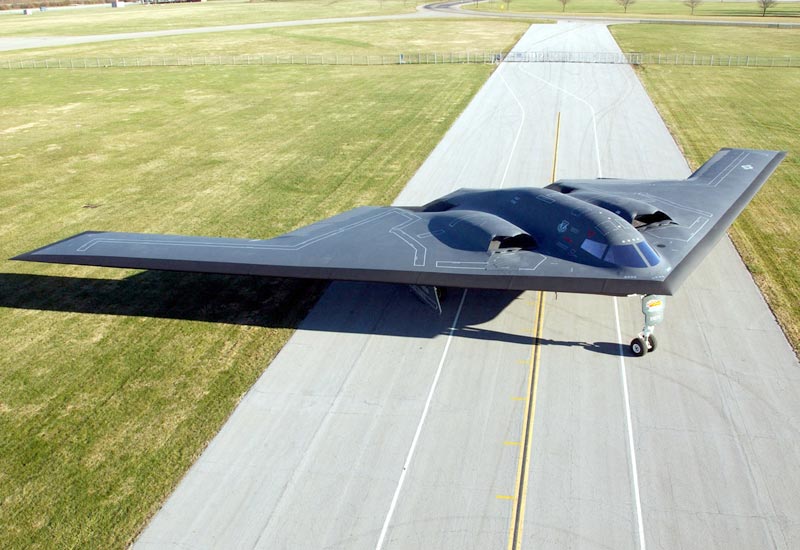 Aviation developments of similar form and function, or related to, the Northrop Grumman B-2 Spirit...