The An-124 Ruslan was first unveiled to Western eyes in 1983 and was formally introduced into service in 1986.

Authored By: Staff Writer | Last Edited: 03/17/2022 | Content ©www.MilitaryFactory.com | The following text is exclusive to this site. 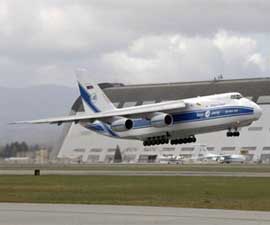 The Antonov An-124 (NATO codename of "Condor") was the world's largest aircraft before the Antonov An-225 made its debut. The An-124 was developed specifically as a replacement for the aging An-22 with a military mission scope similar to the American Lockheed C-5 Galaxy, sharing a similar configuration.

The An-124 utilizes both nose and cargo doors for simultaneous loading and unloading and can move tons of supplies and equipment at the strategic theater level. Her listed empty eight is 175,000 kilograms which is superseded by a maximum take-off weight of 405,000 kilograms showcasing type's hauling capabilities. Power is served through 4 x Ivchenko Progress D-18T series turbofan engines developing 51,600lbs of thrust each. The engine configuration allows for a top speed of 540 miles per hour, a cruise speed of 500 miles per hour, a range out to 3,300 miles with a service ceiling of nearly 40,000 feet (39,400 listed, all factors of course load-dependent).

The general arrangement of the An-124 is highly conventional with a wide, deep fuselage assembly capped by a high-mounted flight deck at the front and an elevated tail unit at the rear. The tail is finished with a single vertical tail fin and low-mounted horizontal planes. The elevated nature of the appendage allows for rear cargo access through proper structural clearance. This requires a strong support structure at the center of the design and the An-124 does not disappoint with 24 wheels managed by two main undercarriage positions under the main section of the fuselage. The nose is supported by a two-wheeled leg in turn.

As with other aircraft of this type, the An-124 makes use of shoulder-mounted wing assemblies offering excellent ground clearance. Each wing sports noticeable sweep along their leading and trailing edges, offering the required handling at low-speeds. Each wing also manages a pair of underwing engine nacelles which provide the necessary thrust for the platform.

As of this writing (2013), many An-124s actually sport civilian markings for they make exceptional material-hauling transports. Libya owns a pair of An-124s while Ukraine operates some seven units. The UAE manages a single example. Russian firms Aeroflot, Ayaks, Russian State Transport Company and Transaero Airlines each operate the type. The Russian Air Force remains the only military operator of the An-124 with 25 examples across the 12th Military Transport Air Division and the 224th Air Detachment of Military Transport Aviation. The United Kingdom was a former limited civilian operator of the type when several concerns - Air Foyle, HeavyLift Cargo Airlines, Antonov AirTrack, Titan Cargo and TransCharter Titan Cargo - made use of the series. All have since been dissolved or have gone out of operations involving An-124s.

Over 50 examples have been produces since service introduction occurred in 1986. The series has existed in several notable variant forms including the base An-124 transport. The An-124-100 is a commercial cargo hauler while the similar An-124-100M-150 is outfitted with Western-minded avionics equipment. The An-124-102 is another commercial variant. The An-124-130 existed as a proposed variant that fell to naught. The An-124-135 proved another air freighter variant. The An-124-150 remains a proposed upgraded mount as does the An-124-200, the latter intended to be powered by American General electric CF6-80C2 series turbofan engines of 60,000lbs thrust each. The An-124-300 is the most modern and technologically advanced offering of the An-124 family, having entered service in number with the Russian Air Force.

It was reported in January of 2013 that a new initiative by Volga-Dnepr Group of Russia is pushing for a restart of An-124 production.©MilitaryFactory.com
Note: The above text is EXCLUSIVE to the site www.MilitaryFactory.com. It is the product of many hours of research and work made possible with the help of contributors, veterans, insiders, and topic specialists. If you happen upon this text anywhere else on the internet or in print, please let us know at MilitaryFactory AT gmail DOT com so that we may take appropriate action against the offender / offending site and continue to protect this original work.

October 2018 - Cargo-LogicAir has partnered with General Electric to study plans to re-engine its fleet of An-124 transports. The CF6-80C2 turbofan appears the likely candidate. 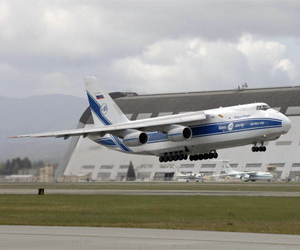 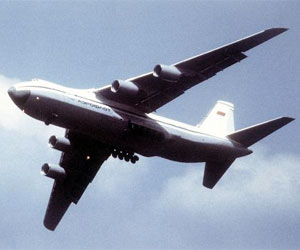 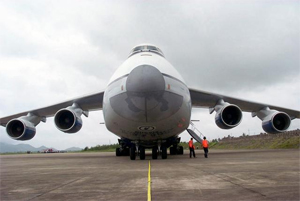 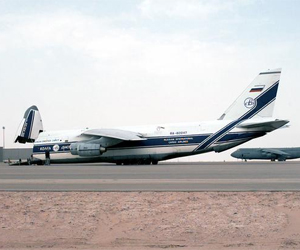 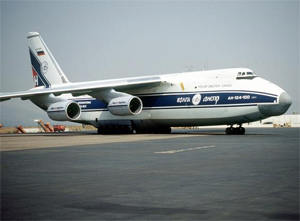