The Hawker Sea Hurricane of World War 2 was a forced navalization of the successful, war-winning, land-based Hawker Hurricane monoplane fighter.

Authored By: Staff Writer | Last Edited: 06/26/2016 | Content ©www.MilitaryFactory.com | The following text is exclusive to this site. 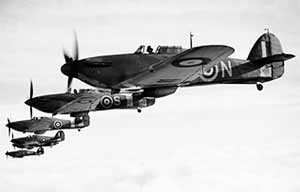 When the need arose for British shipping to be protected from air attack during World War 2, the land-based Hawker Hurricane was selected for conversion into the "Sea Hurricane". Work was handled by the General Aircraft Limited company which took a Hurricane Mk I model fighter and added some 80 modifications to the design, making them adaptable for service about specially-modified Merchant Fleet and Naval Auxiliary vessels. Additional service found later Sea Hurricane marks fielded from Royal Navy escort carriers. 250 Mk I fighters were initially converted to the "Sea Hurricane Mk IA" standard and their appearance was first marked in 1941. Pilots were taken from the ranks of the Royal Air Force despite the aircraft's naval-centric combat role.

These early Sea Hurricanes were outfitted with "catapult spools" used for catapult-launching the aircraft from ships that did not have deck facilities built into their design (unlike an aircraft carrier). As such, Sea Hurricanes could be launched from these ships but not recovered in turn, leaving airmen to manage their fuel stores wisely and find an Allied base in which to land on or simply bail out of their aircraft in the hopes that they would be picked up by passing Allied vessels and not the enemy.

The Sea Hurricane Mk IB then introduced carrier deck arrestor equipment while it still retained the catapult spool function. The combination gear enabled the aircraft to operate from both merchant vessels and carrier decks without additional work added. The Mk IB appeared across 340 total conversions.

The Sea Hurricane Mk IC followed and contained the equipment of the Mk IB variant but introduced the all-cannon wing of its land-based Hurricane brethren (4 x Hispano cannons, two per wing). Their Rolls-Royce Merlin III series engines of 1,400 horsepower were also altered for improved service at lower altitudes, making this mark a more potent form. Service entry of the type was during February of 1942 and 400 conversions were added.

The Sea Hurricane Mk IIC was next in line with its uprated Rolls-Royce XX engine of 1,460 horsepower. These were further evolved over-water warfighters by way of specialized naval radio kits installed. They also retained the all-cannon wing of the Mk IC variant. These Mk IICs went on to serve aboard Royal Navy carriers once carriers became more available in the numbers required.

Sea Hurricanes served in quantity for a good portion of the war, from their inception in 1941 up until 1943 to which then more dedicated naval fighter types were becoming available to the British including Supermarine Seafires (naval conversions of the classic Spitfire) and American Grumman F4F Wildcats.
Advertisements 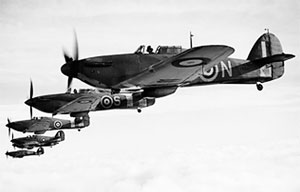