The Hawker Tempest was a successful attempt to improve upon the deficiencies seen in the earlier Hawker Typhoon for its intended interceptor role.

Authored By: Staff Writer | Last Edited: 06/27/2018 | Content ©www.MilitaryFactory.com | The following text is exclusive to this site. 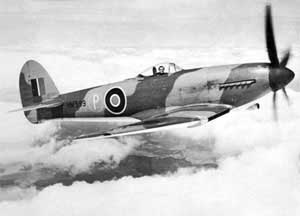 The Hawker Tempest originally appeared as an improved Hawker Typhoon, the war-winning aircraft that effectively failed in its intended role as an interceptor but went on to star as a low-level fighter-bomber. The Tempest began as the "Typhoon II" but featured so many new changes to the aircraft that it was redesignated into its own "Tempest" series classification. The Tempest achieved equal success as a ground-attack fighter-bomber but really shined in interception against the dreaded wave of V-1 flying bombs ravaging England.

Development
The Hawker design team set about to work on the failings of the Typhoon design and submitted a reworked model as Hawker P.1012 to the British Air Ministry in response to its Specification F.10/41. Improvements in fuel storage, a new wing and a redesigned cockpit were all contributing factors in the new design and ended up becoming the glaring deficiencies inherent in the original Typhoon model. The design was accepted as the "Typhoon II" and contracted through Hawker as two prototypes for review. The physical and internal changes in this new design, however, were so numerous that the series was redesignated as the "Tempest". The prototype Tempest aircraft achieved first flight on September 2nd, 1942 with success and, as a result, some 400 models in the Tempest I series were placed on order. However, due to delays of the intended Napier Sabre IV engine, the order was inevitably cancelled. The Tempest F.Mk II - with its Bristol Centaurus engine - was given the go-ahead instead. Once again, delays in engine production delayed this version and attention was moved to Tempest F.Mk.III and Tempest F.Mk IV models with their Rolls-Royce Griffon engines. These twin models were to also suffer unfortunate cancellation, giving rise to the first real production model to enter service in the form of the F.Mk V with its Napier Sabre II series engine.

The Tempest series differed from the Typhoon by sporting a longer fuselage and an all-new thin-section elliptical laminar flow low-mounted monoplane wing. The new wing was designed to solve the high-altitude performance deficiencies of the original Typhoon series and create a truly dedicated - and this time, successful - attempt at an interceptor. Five initial versions of the Tempest were conceived, though only three of these would ever see production in the forms of the Tempest F.Mk II, Tempest F.Mk.V and Tempest F.Mk VI fighter marks. The F.Mk II model would be powered by the Bristol Centaurus engine producing an astounding 2,520 horsepower while the F.Mk V would be powered by the 2,180 horsepower Napier Sabre II series engine and the F.Mk VI fitted with the Napier Sabre V of 2,340 horsepower. Of these three planned models, only the Tempest V actually went on to see combat service - entering the stage in 1943 and, at the time, the fastest fighter aircraft in the world - in the Second World War before the conflict's inevitable finale in mid-1945 though the series as a whole would soldier on up to about 1951.

Design
The Tempest retained some visual elements of the original Typhoons. The Tempest II, however, lost the chin radiator mount - a hallmark of the forerunner's look - and moved these into the wing leading edges. Beyond that, all Tempest models featured a slim rounded fuselage with rounded wings and tail surfaces and a four-blade propeller. The undercarriage was retractable (including tail wheel) and the pilot sat at the mid-fuselage position in a bubble canopy.

Armament
The Hawker Tempest carried over the armament from the Typhoon in the form of the proven 4 x 20mm Hispano Mk V cannons. This formidable armament could be augmented with the addition of 2,000lb of external stores as needed. In this way, the Tempest could undertake the fighter-bomber role with ease and still provide the performance of a top-flight fighter in the process. The FB.Mk II ("FB" designating it a "Fighter-Bomber") variant was fitted with pylons for the launching of air-to-surface rockets or drop bombs - 338 examples of this version were reported to have been produced.©MilitaryFactory.com
Advertisements

Operational Service
The Tempest F.Mk V model was the first of the three Tempest variants to go airborne with this occurring in September of 1942. This model was, in fact, the only Tempest to retain the Typhoon's identifiable chin-mounted radiator protrusion under the engine in the form of a large open-mount scoop. By 1944, the Tempest V was used in anger against German ground targets to much success, following in the steps of the preceding Typhoons which operated with distinction in a similar role. The Tempest V was then used to even greater success in intercepting the lethal German V-1 flying bombs terrorizing southern England. Between June and September of 1944 alone, Tempest V's were credited with the interception and downing of some 638 V-1 terror rockets. The most notable V-1 interception squadrons became No. 3 and No. 486 with 258 and 223 destroyed V-1's respectively. In addition to this, Tempest V's were also credited with the destruction of no fewer than 20 of the new jet-powered Messerschmitt 262 Schwalbe (translated to "Swallow") twin-engine fighters. Tempest V's would later form a strong part of the RAF presence in the Middle East until about 1949. Production eventually numbered some 805 examples and made up eleven squadrons. The Tempest F.Mk V was split into a "Series I" long-barreled cannon production batch and a "Series II" short-barreled cannon production batch.

The Tempest F.Mk II (or "Tempest II") - with its chin-mounted radiator scoop now relocated to the wing leading edges - allowed for fuel stores to be moved into the longer fuselage. This assisted in creating the thinner wings and improved endurance. The Tempest II model series was actually intended for use in the Far East with the projected "Tiger Force" assigned to contend with Japanese elements there but the end of the war in the Pacific negated their usage in this way. With the war all but over by the end of August in 1945, the Tempest II's nevertheless entered operational service in November and served in quantity in the post-war world. Tempest Mk.II's were split in production between a batch of 136 F.Mk II fighters and 338 FB.Mk II's as dedicated fighter-bombers. From there, Tempest II's were showcased in force throughout post-war Germany from 1946 to 1949. Additional systems operated in Malaysia from 1950 to 1951 in attacks against Malaysian terrorists.

Tempest F.Mk VI variant (based on the Rolls-Royce Griffon-powered F.Mk III prototype) numbered some 142 total production examples and were fitted with the Napier Sabre V series engines producing an impressive 2,340 horsepower output. These models went on to form no fewer than five full squadrons themselves.

Tempest F.Mk V and F.Mk VI fighter examples went on to see additional service as target tugs in TT.Mk V and TT.Mk VI designations (based on their respective fighter models).

Conclusion
By all accounts, Hawker engineers appeared to have succeeded in creating a better Typhoon interceptor, achieving their goals in promoting longer endurance thanks to the new fuselage and wing design, improved high-altitude performance (again, thanks to the new wing) and better vision out of the cockpit while still retaining the elements that made the Typhoon such a success in the fighter-bomber role. Its limited involvement in World War 2 was not diminished in any respect, for the type served the British mainland quite well especially when called to save it from the terror rockets being launched daily from German held territories. In the end, the Tempest proved to be one of the finer designs to stem from the conflict - though oft-overlooked when discussing the fine birds of the war - but its accomplishments for the sake of those on the ground will long be remembered.©MilitaryFactory.com
Note: The above text is EXCLUSIVE to the site www.MilitaryFactory.com. It is the product of many hours of research and work made possible with the help of contributors, veterans, insiders, and topic specialists. If you happen upon this text anywhere else on the internet or in print, please let us know at MilitaryFactory AT gmail DOT com so that we may take appropriate action against the offender / offending site and continue to protect this original work.
Advertisements

OPTIONAL:
External ordnance of up to 2,000lb consisting of bombs or rockets.

General Assessment
Firepower
Performance
Survivability
Versatility
Impact
Values are derrived from a variety of categories related to the design, overall function, and historical influence of this aircraft in aviation history.
Overall Rating
The overall rating takes into account over 60 individual factors related to this aircraft entry.
40
Rating is out of a possible 100 points.
Relative Maximum Speed
Hi: 500mph
Lo: 250mph
This entry's maximum listed speed (435mph). 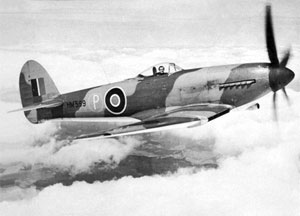 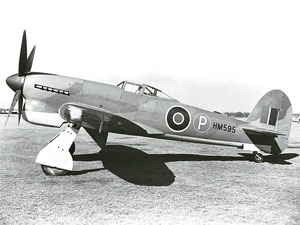 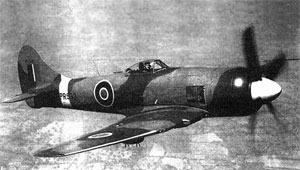