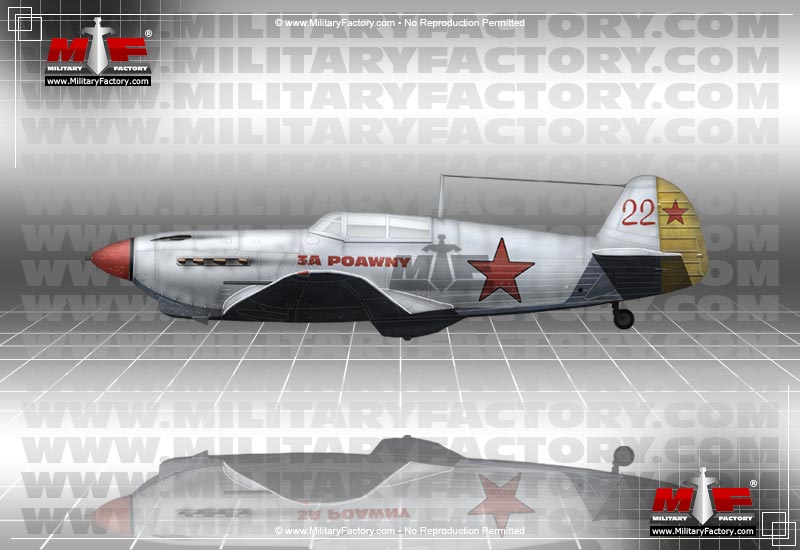 The Yakovlev Yak-1 - and its related Yak-3, Yak-7 and Yak-9 brethren - are an oft-forgotten breed when comparing the best piston-engined fighters of World War 2, surpassing some 36,000 aircraft built in all.

Often overshadowed by its contemporaries in the West (to include the Supermarine Spitfire, North American P-51 Mustang, Messerschmitt Bf 109 and the Focke-Wulf Fw 190) the early production Yakovlev fighter aircraft were some of the best piston-engined fighters fielded during World War 2. When production of all the major Yak fighter marks were combined (Yak-1, Yak-3, Yak-7 and Yak-9) these early Yakovlev creations easily became the most produced fighter aircraft line of the entire war numbering some 37,000 total aircraft. The type initially appeared as the Alexander Yakovlev-inspired Ya-26 prototype design and evolved into the I-26 production form before being redesignated as "Yak-1".

For a brief window into history, the Germans and Soviets maintained an uneasy truce during the formative years of World War 2. Both divided the spoils that was Poland and the each were allowed to commit to other conquering ventures without worry of the other. However, all this changed when Hitler enacted Operation Barbarossa and formally invaded the Soviet Union. Initially, German progress was powerful but stretched supply lines and the Soviet winter brought the Soviets time to regroup. Enough cannot be said about the subsequent Soviet response initially beginning with only a thin line of ill-equipped soldiers, tanks and airmen to stem the tide. Yakovlev set about to produce what would become one of three notable fighter designs that would inevitably bring the Soviet Air Force into the realm of respectability. These three would then be often referred to as the first true "modern" aircraft designs of the Soviet air arm, consisting of the Yak-1, the Mikoyan-Gurevich MiG-3 and the Lavochkin LaGG-3. All would dutifully serve their roles as the Soviet Union pummeled the Germans back into Berlin.

The Yak-1 originated as a design of the Yakovlev bureau, destined to fulfill a 1938 Soviet government requirement for a fighter platform constructed mostly of wood for ease of maintenance, repair and - perhaps most importantly - mass production. The initial design was known as the "Ya-26 Krasavec" and flew for the first time in March of 1939. Upon acceptance of the design into serial production with the Soviet Air Force, the aircraft was afforded the designation of "I-26". Once production had begun, however, the aircraft was redesignated to the more common "Yak-1" naming convention. The acceptance of the Yak-1 would spawn several other successful Yakovlev designs and place the bureau in the elite class of Soviet aircraft design for decades to follow. In any case, the Yak-1 finally put the Soviet Air Force on par with competing German designs of the time (namely the Messerschmitt Bf 109 and Focke-Wulf Fw 190 fighters) and opened the door to improved designs and, thusly, much improved aerial combat tactics that went beyond what the biplanes of the old Russian Empire once offered.

At first glance, the outwardly design of the Yak-1 "Krasavyets" (this name meaning "Little Beauty") proved very utilitarian featuring a basic yet slender fuselage, mid-set canopy and a low-cut vertical tail surface. Though the initial Yak-1 would feature a "razorback" fuselage spine (blocking views to the critical "six"), the upcoming Yak-1b sported an unobstructed bubble-type design. Construction consisted of a combination of plywood covered over in fabric that made the Yak-1 both easy to produce in large numbers and generally easier to maintain. Additionally, such a structure could withstand greater damage from enemy guns. Power was derived from a single Klimov-brand engine fitted to the front of the design and developing some 1,100 horsepower or more depending on the production model. The Yak-1 proved a highly capable performer that quickly endeared herself to her new generation of Soviet pilots. Initial production totals in 1940 were slow to mount though the German invasion of 1941 put the program into high gear of what would become one of the most celebrated Soviet piston-engine designs of the war.

The Yak-1 appeared in an improved form designated as the Yak-1b. Improvements included revised armor protection, a retractable tail wheel, bubble canopy upgraded engines and weapons. Two examples of the experimental Yak-1M existed and these were given more powerful engines, smaller-area wings and other improvements to help refine the mark. Total production of the Yak-1 exceeded some 8,700 examples. The I-28 prototype was intended as a Yak-5 interceptor but never produced - instead the improvements went into the upcoming Yak-7 and Yak-9 fighter models.

The Yak-3 appeared as a "lighter" version of the Yak-1 in an effort to help increase performance, first flying in late 1943. The Yak-7 followed thereafter and began life as a trainer with excellent performance enough to warrant 5,000 fighters being built. This design eventually culminated with the excellent Yak-9 "Frank", itself a further development of a Yak-7 experiment. This particular model would itself spawn a plethora of battlefield-necessary designs including a dedicated tank-buster, fighter-bomber and several long-range fighter escort mounts. In all, the Yakovlev designs would prove to be some of the most instrumental and best-performing fighters of the entire war and Luftwaffe pilots themselves would later attest to these excellent flying machines available to Soviet airmen.

As an aside, the Yak-1 was known to serve within the Soviet all-female Soviet air unit (the 586 IAP) that would go on to produce two of the world's only female air aces - Lydia Litvyak and Katya Budanova - each collecting 12 and 11 air victories respectively. Soviet women played a crucial role in the forging of the new Soviet military. The Yak-1 was fielded y the Free French forces, Poland and Yugoslavia. For the latter, the Yak-1 served until 1950.

France (Free French); Poland; Soviet Union
(OPERATORS list includes past, present, and future operators when applicable)
✓ Air-to-Air Combat, Fighter
General ability to actively engage other aircraft of similar form and function, typically through guns, missiles, and/or aerial rockets. ✓ Interception
Ability to intercept inbound aerial threats by way of high-performance, typically speed and rate-of-climb. ✓ Close-Air Support (CAS)
Developed to operate in close proximity to active ground elements by way of a broad array of air-to-ground ordnance and munitions options. ✓ Training (General)
Developed ability to be used as a dedicated trainer for student pilots (typically under the supervision of an instructor).

OPTIONAL:
Up to 441lb of external stores including both bombs and rockets.