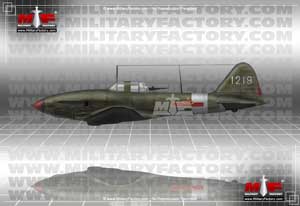 The Ilyushin IL-10 was a follow-up design to the classic IL-2 "Shturmovik", an armored ground attack aircraft that won the air war for the Soviets in the East Front of World War 2. Visually similar to its predecessor, the newer IL-10 was developed in the closing years of the war and only saw limited action in a handful of delivered models. The type went on to see more service in the Korean War, fighting for the North Koreans against NATO forces on the peninsula.

Following the successes of its IL-2 platform, work had already begun on a new an improved version by 1943. The Ilyushin firm began work on what was intended to be a very heavily armed and armored fighter (designated by this time as the IL-1) intended as an interceptor for bombers. When this need fell by the wayside with the Soviet Air Force, the design was translated into the more conventional ground attack platform, a platform where low level flight, speed and armor are all benefits to the design. This new conversion of the IL-1 became the more identifiable designation of IL-10.

By this time, the IL-10 had beaten out a Sukhoi design and the prototype passed the required trials. With that, the IL-10 was accepted into production and was slated to become the new standard ground attack aircraft of the Soviet air force. In essence, the IL-10 was an improved IL-2 to be sure, sharing many outward similarities to the design and thusly maintained a developmental advantage having been designed from an existing and highly successful airframe. The first production aircraft was in flight by September of 1944 and - by production end - would see over 6,000 produced.©MilitaryFactory.com
Advertisements

The IL-10 design followed suit with the IL-2, with a to man crew. The pilot sat in the forward cockpit area mounted in the design over the wing system. The rear gunner sat in a rear-facing seat just over and behind the wing. Wings were of the same low-monoplane mounting and the IL-10 featured the same distinct three-bladed propeller. Power was derived from a single Mikulin liquid-cooled engine. Initial armament of early production models consisted of 2 x 23mm cannons and 2 x 12.7mm machine guns in the wings along with a single 12.7mm machine gun in the rear gunner position. From 1947 onwards, this would be supplanted by a more powerful array of 4 x 23mm cannons and a single 20mm cannon in the rear gunner position. The ability to carry 4 x air-to-surface rockets was also added by this time, increasing the potential lethality of the system, especially in its close-support role. As expected, bombs would also be carried as needed and this total could reach some 1,320 pounds of ordnance.

The IL-10 did not appear in many varied forms. The IL-10U was designed as a modified trainer in which the rear gunner position acted as the instructors area. Controls were duplicated in this position and armament varied little. It formed a very good basic training platform for the real combat version of the IL-10. The IL-10M represented the improved IL-10 with the 4 x 23mm and 1 x 20mm cannon layout explained above. Handling and navigation were also improved in this version ad control surfaces and wingspan were increased. Early production IL-10 had shown some growing pains, particularly in the powerplant, but these were effectively ironed out before the IL-10M version. The IL-10 also appeared under license production with the Czech Air Force as the B33. This particular model would also see use with Yemeni forces in a later delivery.

The IL-10 appeared in quantity by 1944, though these were supplied to various training units at first and combat models were not made available until 1945, the last year of the war. By this time, the war was beginning to wind down and only a few handful of IL-10s managed to see any combat against German foes in the conflict, having to wait instead for the upcoming Korean War to follow shortly afterwards. Several IL-10s did see some action against Japanese forces in the Pacific. In North Korean hands, the IL-10 found some early successes against South Korea but were wholly outmatched with the arrival of US and NATO forces shortly thereafter.

In all, the IL-10 was not designed without faults but it quickly established itself as a successful runner up to the IL-2. The platform proved viable in the continued ground attack role and was made more lethal with the changing requirements. Even in the early stages of the jet age, the low-flying low-speed ground attack propeller-driven systems still found a home on the modern battlefield. IL-10 were examples of that in much the same way that Douglas Skyraiders of the Americans would still be in service during the Vietnam War, fighting alongside jets in the close-support role.©MilitaryFactory.com
Note: The above text is EXCLUSIVE to the site www.MilitaryFactory.com. It is the product of many hours of research and work made possible with the help of contributors, veterans, insiders, and topic specialists. If you happen upon this text anywhere else on the internet or in print, please let us know at MilitaryFactory AT gmail DOT com so that we may take appropriate action against the offender / offending site and continue to protect this original work.
Advertisements

(Showcased performance specifications pertain to the base Ilyushin IL-10 (Beast) production variant. Performance specifications showcased above are subject to environmental factors as well as aircraft configuration. Estimates are made when Real Data not available. Compare this aircraft entry against any other in our database or View aircraft by powerplant type)
STANDARD:
2 x 23mm NS-23 cannons in wings
1 x 12.7mm UBST machine gun in rear cockpit on trainable mount. 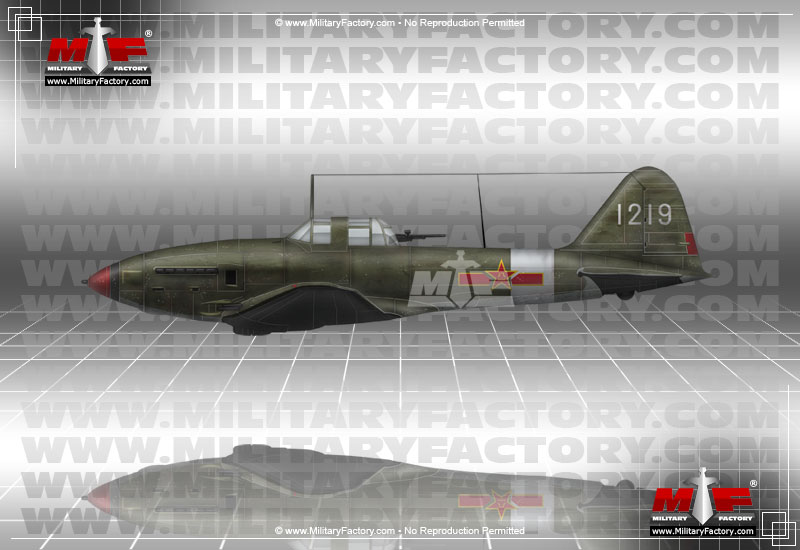