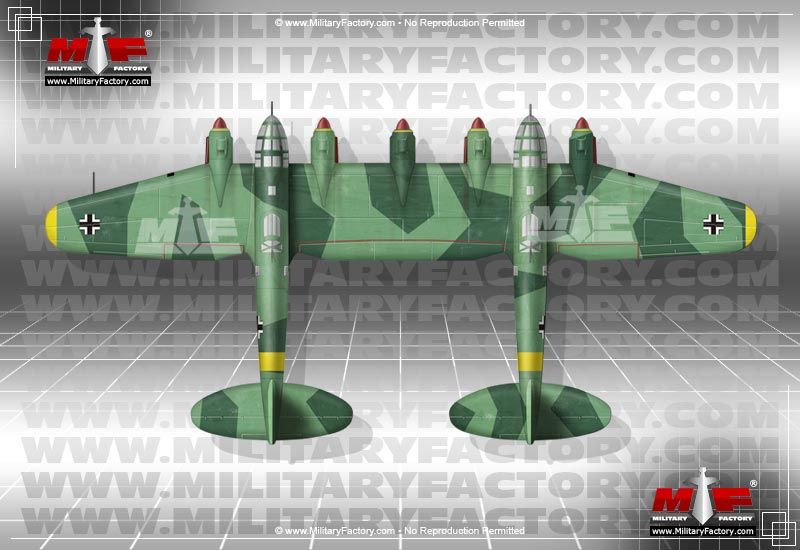 The dual-fuselage, five-engine Heinkel He 111 Zwilling was specifically designed as a heavy transport powerful enough to tow the large Messerschmitt Me 321 cargo gliders.

Authored By: Staff Writer | Last Edited: 06/16/2018 | Content ©www.MilitaryFactory.com | The following text is exclusive to this site.
The He 111 Z (or "Zwilling") was a relatively successful joining of two He 111 medium-class bombers (detailed elsewhere on this site) to bring together an existing airframe designs suitable to transport the massive Messerschmitt Me 321 cargo glider. The He 111 Z became a possible solution with the intent that a large wing area with five installed powerplants would prove sufficient. Externally, the creation appeared as nothing more than two He 111 airframes joined at a common wing section with an extra (fifth) engine fitted to the joining structure.

A pair of twin-engine He 111 H-6's served as base conversion models for the new Heinkel Zwilling design. Two He 111 Z prototypes were then constructed with the He 111 H-6's joined by a center wing chord structure containing the fifth engine. The design was sound on the whole when evaluated by pilots at Rechlin and this resulted in ten production He 111 Z's ordered. The portside fuselage accommodated the pilot, primary mechanic, dedicated gunner and a radio operator/navigator while the starboard fuselage held the co-pilot, secondary mechanic and another gunner bringing the total crew count to seven (the co-pilot could double as a navigator if the situation pressed). The pilot was afforded full instrumentation while the co-pilot was given only a limited instrument panel. As such there was no real redundancy to the system as one might expect in such a design arrangement. The pilot was afforded five throttle levers for complete control over the five engine installations. Control for the radiator flaps was divided between the port and starboard cockpits with each man having control of the radiator flaps to his own side. Undercarriage control could be handled by either cockpit. Self-defense was managed through a variety of machine gun arrangements mostly centering on 7.7mm MG and/or 13mm MG machine guns as well as 20mm cannons. Armament varied, however, and was primarily dependent on what the "donor" He 111 H-6 airframe selected for conversion.

The engine configuration was made up of 5 x Junkers Jumo 211F 12-cylinder, liquid-cooled, inverted Vee engines of up to 1,340 horsepower each. These engines were fitted across five individual nacelles along the wing leading edge, three found at the center wing chord and two held outboard to either side of their respective fuselage in the usual way. Despite this multi-engined layout, the He 111 Z was still somewhat underpowered when attempting to pull a fully-loaded Me 321 glider. This was rectified through the utilization of rockets for additional thrust (RATO - "Rocket Assisted Take-Off") - not a wholly uncommon sight found at the beginning of the jet age. The Zwilling could, however, maintain flight if any or all of the three central wing cord engines failed - certainly showcasing the importance of the outboard engines. Range could be augmented by up to four external drop tanks which supplied the design its needed endurance.

By the end of the war, only four He 111 Zwillings were known to exist in operational condition despite some 12 total ultimately produced. The unaccounted for Zwillings were reportedly lost to Allied action while either in the air or still grounded. In any case, the Zwilling proved a (limited) success for it was quite capable of ferrying dozens of injured while being able to supply the massive Messerschmitt Me 321 gliders with a much-needed glider tug.

Several production marks of the He 111 Z were planned though only the original He 111 Z-1 ever saw any level of quantitative manufacture while the proposed Z-2 long-range bomber and Z-3 long-range reconnaissance platform never came to fruition. Both variants would have been based on the work already completed through the Z-1 production initiative.

Status
RETIRED
Not in Service.
Crew
7 to 9

(Showcased performance specifications pertain to the base Heinkel He 111Z (Zwilling) production variant. Compare this aircraft entry against any other in our database. View aircraft by powerplant type)
Variable. Mix of 7.7mm and 13mm machine guns with the occasional 20mm cannon depending on what was kept from the original base aircraft utilized for the conversions.