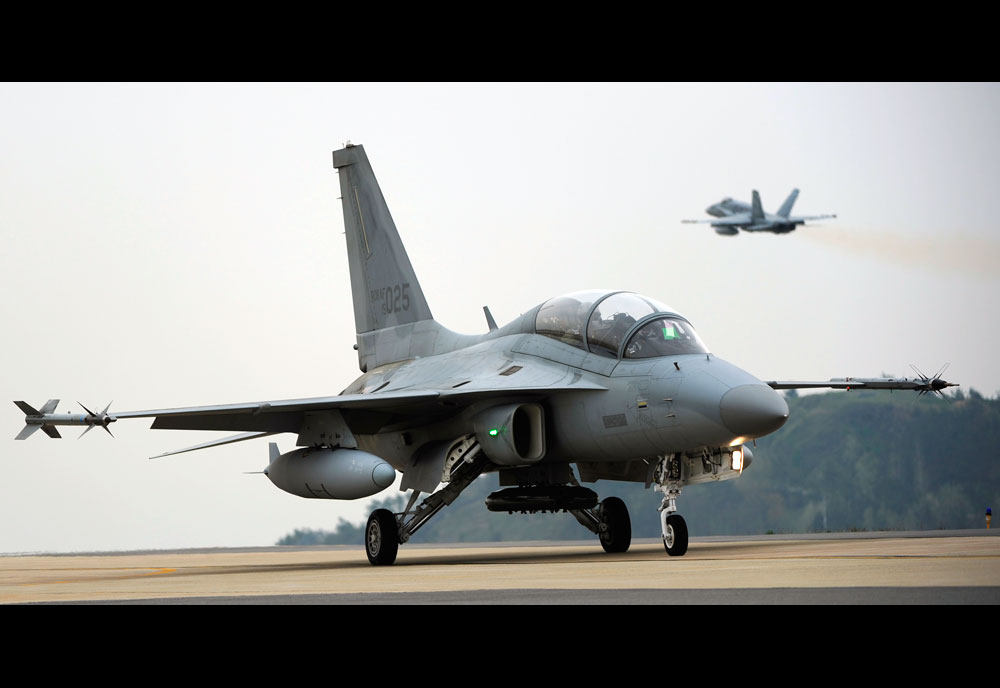 Image released to the public by way of the US DoD DVIDS image database.
2 / 5 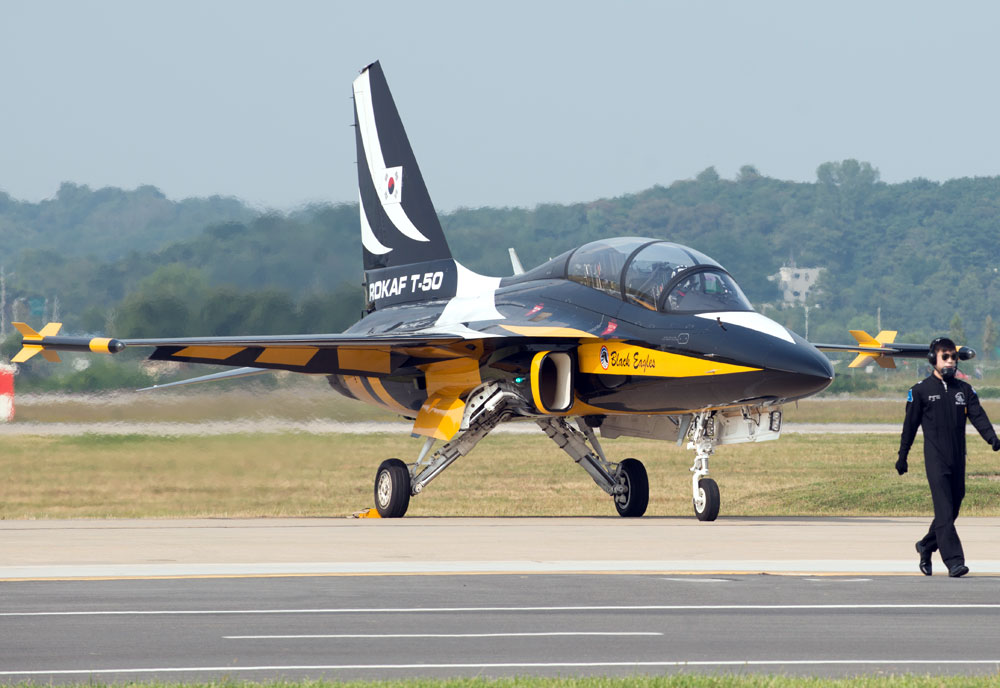 Image released to the public by way of the US DoD DVIDS image database.
3 / 5 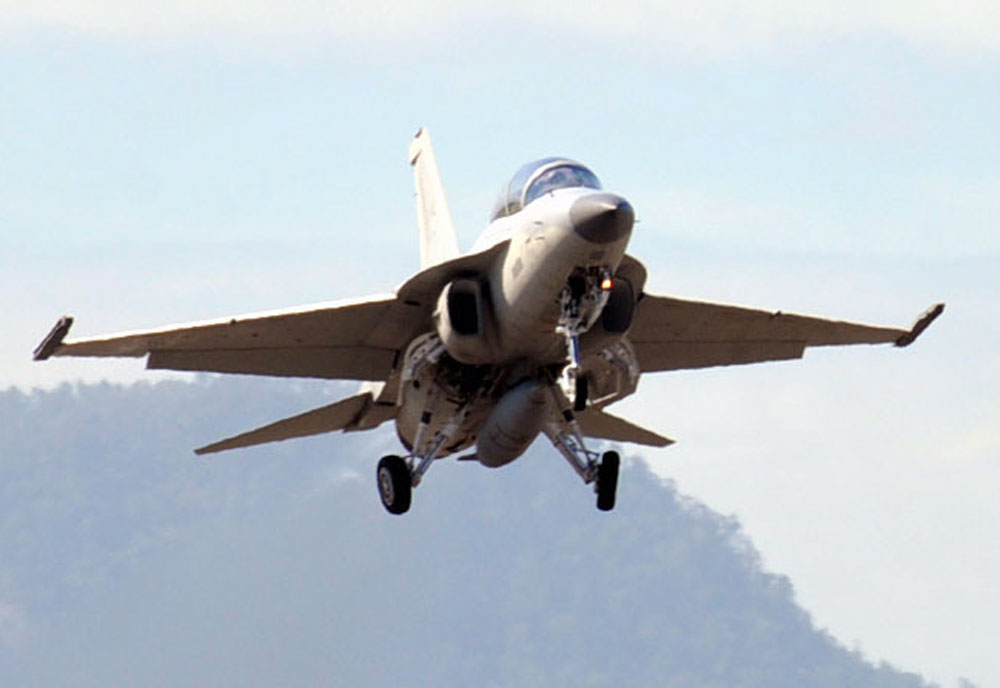 Image released to the public by way of the US DoD DVIDS image database.
4 / 5 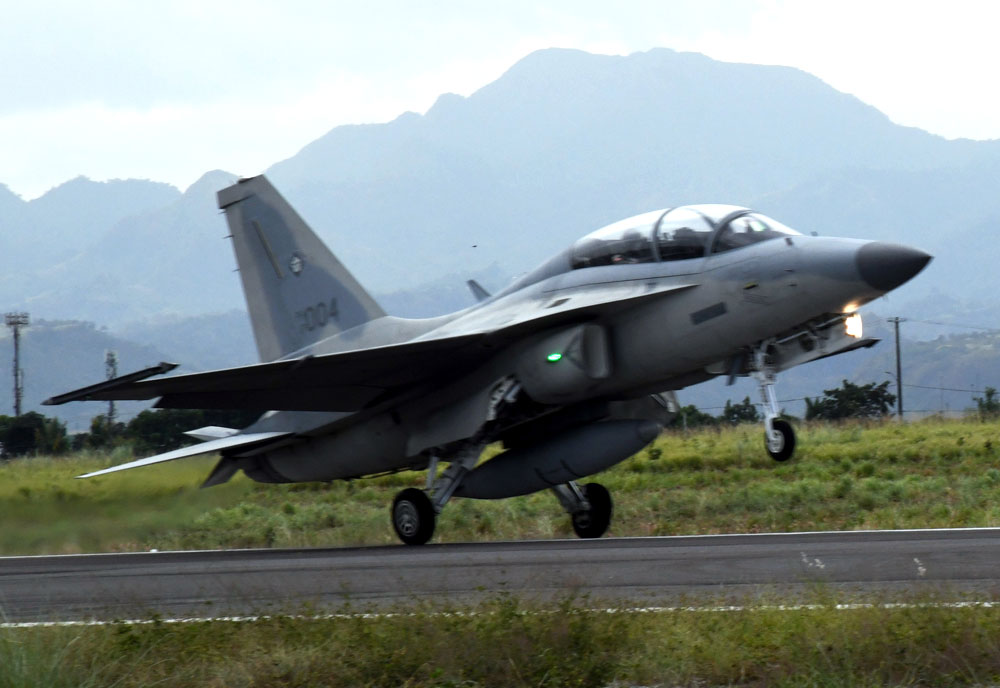 Image released to the public by way of the US DoD DVIDS image database.
5 / 5 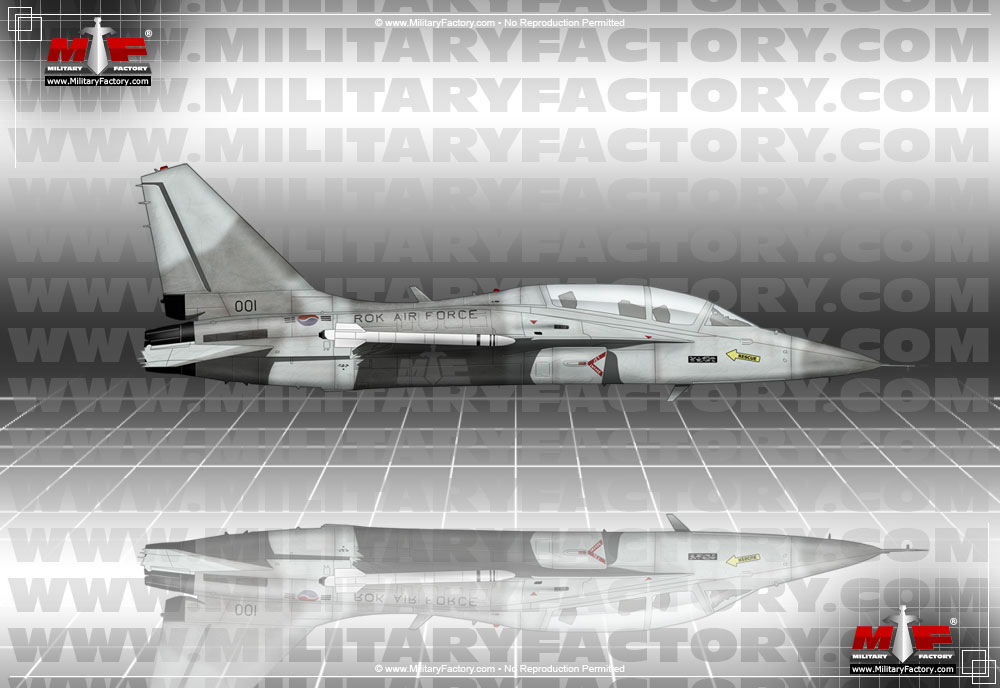 The KAI T-50 Golden Eagle of South Korea is an advanced supersonic jet trainer that can double as a light attack strike fighter if needed.

Authored By: Staff Writer | Last Edited: 04/27/2021 | Content ©www.MilitaryFactory.com | The following text is exclusive to this site.
The T-50 / A-50 "Golden Eagle" is an advanced supersonic trainer and light strike-capable aircraft platform produced jointly by the South Korean firm of Korean Aerospace Industries (KAI) and the American firm of Lockheed Martin. The resulting design is a highly modified derivative of the Lockheed Martin (formerly General Dynamics) F-16 "Fighting Falcon", of which KAI license-builds as the "KF-16" (the wing shape and single rudder design are apparent). The Golden Eagle twin-seat trainer has been procured in limited numbers with the South Korean Air Force.

The T-50 family was developed to replace a slew of active, though aging, platforms for the South Korean Air Force. More importantly, the involvement by Lockheed Martin ensured that the American company would assist in developing a next-generation advanced trainer capable of instructing a new crop of fighter pilots - particularly those that may end up in the cockpits of the Lockheed F-22 Raptor, Lockheed F-35 Lightning II, French Dassault Rafale and the European consortium Eurofighter Typhoon aircraft. Much like the F-16 Fighting Falcon before it, the T-50 features a large glass canopy (the pilots seated in tandem), a single large-area vertical tail fin and a single turbofan powerplant in the General Electric F404 series. The system's developmental funding was split between the two participating firms with the government of South Korea taking on all remaining costs. The prototype recorded its first flight on August 20th, 2002. Prior to, the entire F-50 program suffered through financial setbacks before coming back on track. The T-50 was formally introduced into service on February 22nd, 2002. It has since been adopted by the Indonesian Air Force as well beginning in 2013 (16 aircraft - 12 T-50s and 4 x TA-50s). Production of T-50 aircraft began in 2001 and is ongoing as of this writing (2013). South Korea manages a stable of 102 aircraft made up of 50 x T-50s, 10 x T-50Bs, 22 x TA-50s and 20 x FA-50 (the latter on order as of 2013).

Initial evaluations during development saw the aircraft exceed Mach 1.0 though the design was initially estimated to achieve speeds of up to Mach 1.5. The engine provides full afterburning capabilities which supply short bursts of speed to the aircraft - maximum speed being 1,100 miles per hour at 10,000 feet. Operational range is 1,150 miles with a service ceiling of 48,000 feet. Triple-redundant, digital fly-by-wire technology is utilized for precision handling with dual controls available through both cockpits (as the T-50 can be utilized as an attack airframe or advanced trainer). The primary pilot/student resides in the front cockpit with the co-pilot/instructor in the rear. Avionics includes AN/APG-67 pulse Doppler radar (in the T-50) and EL/M-2032 advanced pulse Doppler Fire Control Radar (for the TA-50 and FA-50 marks).

The "Golden Eagle" is marketed as an advanced trainer under the designation of T-50, as a "fighter lead-in" platform under the TA-50 designation and as a light strike-capable variant under the FA-50 designation. These aircraft differ from one another mostly in the types of internal systems installed to achieve the desired mission role. The trainer does not mount the internal cannon nor advanced radar while the FA-50 is designed for day-and-night operations. The TA-50 is an in-between design combining the applications of both aircraft. All variants feature seating for two. The T-50B is a highly-specialized, high performance aerobatic demonstrator developed exclusively for the eight-aircraft-strong South Korean "Black Eagles" 53rd Air Demonstration Group.

In the armed strike role, the Golden Eagle can be outfitted with various conventional munitions to suit mission requirements. A standard internal 20mm General Dynamics A-50 gatling gun (a three-barreled version of the M61 Vulcan) is provided for close-in work as are rail-launchers along each wingtip for the AIM-9 Sidewinder short-range air-to-air missile. Additionally, the aircraft can field a variety of underwing ordnance as well as external fuel tanks. Ordnance options include air-to-air missiles, air-to-surface missiles (including the AGM-65 Maverick), unguided rocket pods, general purpose drop bombs, cluster bombs and precision-guided drop bombs.

South Korea failed to interest both Singapore and Israel in their T-50 mount. Possible sales are noted to the Botswana, Chile and the Philippines.

May 2013 - It was announced that South Korea will procure an additional 40 TA-50 strike aircraft. The added production will allow an extended lease on life for the T-50 series as a whole, ensuring production lines remain open until 2016. The T-50 is in play for the USAF T-X program, the branch's search to find its new advanced trainer.

January 2014 - The Iraqi Air Force has elected to procure the KAI T-50 as light attack fighters in a 24-strong order. Deliveries are expected to begin in April of 2016 and end by 2017. The Iraqi model in question will follow the FA-50 design and its multi-role qualities while flying under the local "T-50IQ" designation for the IAF.

November 2015 - First deliveries to the Philippines were in November of 2015, these brought to the 7th Tactical Fighter Squadron.

Thailand has ordered four T-50TH advanced trainers for delivery in 2018.

December 2015 - The T-X prototype for the USAF competition was unveiled on December 17th, 2015. An aerial refueling capability has been added (which has resulted in a dorsal "hump") as has a large-area display in the cockpit (replacing the original five-screen arrangement). Initial testing is set to begin in 2016 with flight testing to start sometime in 2017.

July 2017 - The government of Thailand has announced a follow-up order for eight additional KAI T-50 aircraft.

July 2019 - The KAI FA-50 and Leonardo M-346FA are in the running to succeed the Argentine Air Force's aging fleet of A-4AR "Fightinghawk" fighters. Eight to ten aircraft are sought in the deal.

September 2019 - The Argentine government has currently (indefinitely) shelved the prospect of a T-50 purchase.

November 2019 - KAI is scheduled to deliver up to eight T-50 Advanced Jet Trainer aircraft to Thailand in 2020.

June 2020 - South Korea has committed to an order for twenty additional TA-50 fighter-trainers.

August 2020 - South Korea is proposing its T-50 Advanced Jet Trainer for a standing Royal Australian Air Force (RAAF) requirement. Up to four defense players are in the running as the service intends to replace an aging fleet of BAe Hawk aircraft (Hawk Mk.127) in same role.

October 2020 - Britain's ongoing arms embargo against Argentina has ended any hope for the FA-50 coming to the Argentine Air Force.

Indonesia; Iraq; Philippines; South Korea; Thailand
(OPERATORS list includes past, present, and future operators when applicable)
✓ Close-Air Support (CAS)
Developed to operate in close proximity to active ground elements by way of a broad array of air-to-ground ordnance and munitions options. ✓ Training (General)
Developed ability to be used as a dedicated trainer for student pilots (typically under the supervision of an instructor).

(Not all ordnance types may be represented in the showcase above)
Hardpoint Mountings: 7 (including wingtips)

Values are derrived from a variety of categories related to the design, overall function, and historical influence of this aircraft in aviation history.
Overall Rating
The overall rating takes into account over 60 individual factors related to this aircraft entry.
80
Rating is out of a possible 100 points.
Relative Maximum Speed
Hi: 1000mph
Lo: 500mph
This entry's maximum listed speed (990mph).