By the time World War 2 was in full swing in 1939, the Arado Ar 68 was relegated to pilot trainer - succeeded as a frontline fighter by the Messerschmitt Bf 109.

Authored By: Staff Writer | Last Edited: 05/08/2019 | Content ©www.MilitaryFactory.com | The following text is exclusive to this site. 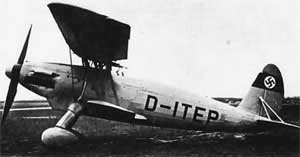 The AradoAr 68 became one of the important first-steps to a rearming Germany during the 1930s. The biplane aircraft was designed by Walter Blume, a World War 1 (1914-1918) veteran who was wounded on the ground during the early part of the conflict - forcing him to become a pilot. His career, which ended in January of 1919, began in flying two-seat Aviatik scouts and became an ace before continuing in the field with Arado Flugzeugwerke as an engineer.

Into the 1930s, as fascism swept across Europe, Germany looked to rearm and Arado became one of the primary players during the period - helping the Luftwaffe to establish itself as one of the premiere air services anywhere in the world. Early entries into the inventory became types such as the Heinkel He 51 biplane of 1933 - the Arado Ar 68 was quickly developed as its successor and first flew in 1934 as "Ar 68 V1".

The V1 form carried an underpowered BMW Vi series engine of 660 horsepower at the streamlined nose set ahead of the pilot's open-air position. A biplane wing arrangement was used which incorporated an over-and-under wing configuration of uneven-span and single bays. The wings were braced by N-type struts as well as cabling. The fuselage held a streamlined form overall and tapered towards the tail to which a single, rounded vertical fin was fitted along with horizontal planes. A fixed, tail-dragger undercarriage was used for ground-running. The main legs were spatted for aerodynamic efficiency - a common trait of aircraft of the 1930s.

The aircraft was categorized as a fighter and could fulfill roles such as light bombing, interception, training, and reconnaissance. The first prototype, Ar 68a, was outfitted with a BMW VId V-12 engine of 641 horsepower and then followed the second as Ar 68b with its Jumo 210A V-12 (inverted) engine of 610 horsepower. The third prototype became Ar 68c and flew with same engine followed by Ar 68d and its BMW VId V-12 fit of 641 horsepower output. This model was then re-designated as Ar 68 V4 under the new Luftwaffe designation system. A fifth prototype was brought online as Ar 68e and carried a Jumo 210Da V-12 (inverted) of 680 horsepower output. This became the Ar 68 V5 under the new naming system.

From all this work was had the Ar 68E, the first operational-quality model to be taken into service with the Luftwaffe (this in 1936). It was powered by the Junkers Jumo 210 of 671 horsepower. The aircraft were stationed in East Prussia during the early-going and some of the stock was shipped to fight in the Spanish Civil War (1936-1939) - a vital test bed for many of Germany's new weapons of the decade.
Advertisements

In practice, the aircraft was a sound, solid, and stable platform in the air and was generally considered high performance for the period. However, the Ar 68 had a poor showing against speedier, single-engined Soviet types like the monoplane Polikarpov "I-16" (detailed elsewhere on this site) and this resulted in a revision of the design to produce the "Ar 68F" with its BMW VI 7.3Z engine of 750 horsepower - an attempt to extract more power and performance from the outclassed machine. Another experiment resulted in the ultimately-abandoned "Ar 68G" and its supercharged BMW VI of 671 horsepower. Still another shifted to a supercharged air-cooled radial engine of 850 horsepower through the BMW 132Da 9-cylinder unit producing the one-off "Ar 68H". This fighter model was also of note as it had a fully-enclosed cockpit - the first for the company.

Despite its limitations, the Ar 68 served well in its role as Germany looked to more advanced metal-skinned, monoplane forms. This work resulted in the stellar Messerschmitt Bf 109 which soon took the mantle of Germany's most-used fighter from the Ar 68. The last Ar 68 aircraft were relegated to the night-fighting role in their last few years of frontline service - which arrived in 1940. By that time, the line was all but outclassed by modern fighters.

The Ar 68F production model could manage a maximum speed of 205 miles per hour and range out to 310 miles while reaching heights of 24,300 feet. Rate-of-climb was an excellent 2,480 feet-per-minute and near-20,000 feet altitudes could be reached in about sixteen minutes. Dimensions included a length of 31.1 feet, a wingspan of 36 feet, and a height of 10.9 feet. The BMW engine drove a two-bladed, 10.1 foot, fixed-pitch propeller at the nose.

Nazi Germany; Spain
(OPERATORS list includes past, present, and future operators when applicable)
✓ Air-to-Air Combat, Fighter
General ability to actively engage other aircraft of similar form and function, typically through guns, missiles, and/or aerial rockets. ✓ Ground Attack (Bombing, Strafing)
Ability to conduct aerial bombing of ground targets by way of (but not limited to) guns, bombs, missiles, rockets, and the like. ✓ Intelligence-Surveillance-Reconnaissance (ISR), Scout
Surveil ground targets / target areas to assess environmental threat levels, enemy strength, or enemy movement. ✓ Training (General)
Developed ability to be used as a dedicated trainer for student pilots (typically under the supervision of an instructor).

General Assessment
Firepower
Performance
Survivability
Versatility
Impact
Values are derrived from a variety of categories related to the design, overall function, and historical influence of this aircraft in aviation history.
Overall Rating
The overall rating takes into account over 60 individual factors related to this aircraft entry.
76
Rating is out of a possible 100 points.
Relative Maximum Speed
Hi: 300mph
Lo: 150mph
This entry's maximum listed speed (205mph). 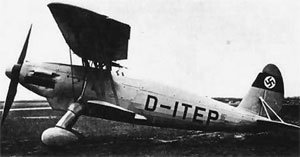