The cancelled, twin-boom Arado Ar E.340 was to replace the Junkers Ju 88 and Dornier Do 217s medium bombers in service with the German Luftwaffe during World War 2.

Authored By: Dan Alex | Last Edited: 05/08/2019 | Content ©www.MilitaryFactory.com | The following text is exclusive to this site. 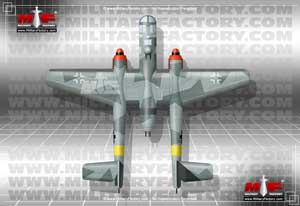 Arado proposed the Ar E.340 for a German Air Ministry requirement during World War 2 calling for a twin-engined, medium-class bomber to replace the pre-war line of Junkers Ju 88 and Dornier Do 217 bombers then in frontline service. The Arado submission offered the potential for multi-role airframe capable of level bombing, dive-bombing and Close-Air Support (CAS). While four prominent German aviation bureaus submitting their designs, the Arado contribution was selected for further development.

As conceived, the E.340 was to utilize a twin-boom, prop-powered layout with a centralized fuselage nacelle. Engines would be fitted at the front of each nacelle to contour along the wing leading edges. The aft portions of the booms would mount horizontal planes and vertical fins. There was no stabilizer plane between the two aft boom sections (as seen in the American Lockheed P-38 Lightning fighter). Wings included reinforced roots inboard of each boom and sections found outboard. Consistent with the period, the leading edge was to be straight with the trailing edge angled forwards to the clipped wingtips. The operating crew was to number four with the cockpit at the front-most section of the fuselage nacelle, heavily glazed for optimal viewing. Armament was to include 3 x 20mm MG 151/20 series cannons with 2 x 13mm MG131 heavy machine guns. Also proposed were 2 x radio-controlled powered turrets (dorsal and ventral) and unknown armament to be fitted at each aft portion of each tail boom to protect the aircraft's critical "six". The bomb load (estimated) would be 13,000lb.

Power was to be served through an engine pair of either Junkers, Daimler-Benz or BMW origin with the Junkers Jumo 222 was eventually selected for the final product. The estimated maximum speed was 360 mph with a range of 2,235 miles. Due to the fuel requirement of the Jumo (and its extreme scarcity in wartime Germany), development of the entire project suffered and was ultimately cancelled.©MilitaryFactory.com
Note: The above text is EXCLUSIVE to the site www.MilitaryFactory.com. It is the product of many hours of research and work made possible with the help of contributors, veterans, insiders, and topic specialists. If you happen upon this text anywhere else on the internet or in print, please let us know at MilitaryFactory AT gmail DOT com so that we may take appropriate action against the offender / offending site and continue to protect this original work.
Advertisements

(Showcased performance specifications pertain to the base Arado Ar E.340 production variant. Performance specifications showcased above are subject to environmental factors as well as aircraft configuration. Estimates are made when Real Data not available. Compare this aircraft entry against any other in our database or View aircraft by powerplant type)
PROPOSED:
3 x 20mm MG 151/20 automatic cannons in turret.
2 x 13mm EDL 131 machine guns in turret.

Up to 13,000lb of conventional drop bombs (estimated). 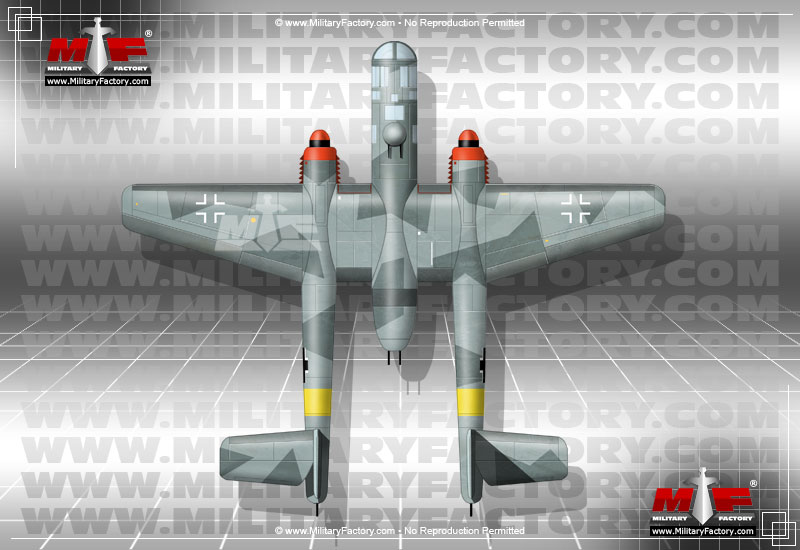