Authored By: Staff Writer | Last Edited: 05/31/2016 | Content ©www.MilitaryFactory.com | The following text is exclusive to this site. 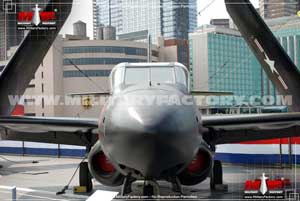 The Douglas Skyknight was a dedicated carrier-based night fighter serving with the United States Navy (USN) and Marine Corps (USMC) from 1951 to 1970. The series became the world's first jet-powered carrier-based night-fighter to enter operational service and achieved aviation history's first jet-versus-jet nighttime kill during the Korean War when an F3D Skyknight downed a North Korean Yak-15 in 1952. The Skyknight series was one of the few American aircraft to see combat service in both the Korean War (1950-1953) and the Vietnam War (1955-1975) (arguably the most famous of these being the Douglas Skyraider).

The Skyknight was developed from the ground up as a night-fighter intended for after-hours and low-light level work from Untied States carriers. As such, she was designed around a suite of then-advanced radar arrays which worked in conjunction to produce a viable - though maintenance intensive - night-fighting platform. The USN placed a requirement for such an aircraft in 1946 - the final year of World War 2 when jet power was still in its relative infancy - which resulted with the XF3D-1 prototype under the design direction of Ed Heinemann - designer of the famous Douglas A-4 Skyhawk of Vietnam War fame and director of the ubiquitous General Dynamics F-16 Fighting Falcon multirole platform. The USN requirement included a maximum speed of 500 miles per hour, an operational radius of 500 miles and an operational altitude of 40,000 feet.

The Douglas submission - which bested the Grumman design (this to become the F9F Panther in its own right) - was a rather unconventional two-seat, twin-engine aircraft with straight wings. The utilization of two radar facilities for tracking and engagement of hostiles promoted a wider-than-normal nosecone which allowed for side-by-side cockpit seating of the two pilots and a rather overall squat fuselage design (earning the aircraft the unflattering nickname of "Willie the Whale"). The radar warning receiver (RWR)was added in a rear-facing mounting to the base of the empennage. An escape "tunnel" through the rear of the airframe did away with costly and complicated ejection seats, allowing the pilots an escape route to parachute out from. The required thrust and range was countered by installation of 2 x Westinghouse J34 turbojet engines fitted low at center with aspiration through the front of the integrated nacelles and exhaust under the base of the empennage. The wings were mid-mounted straight monoplanes which provided the necessary control flight control at altitude. Armament - intended to bring down large bomber-type aircraft under the cover of darkness - consisted of 4 x 20mm Hispano-Suiza M2 cannons, these fitted under the forward fuselage.

As a "bomber destroyer", the XF3D-1 could rely on "stealth" through darkness, its cannon armament and its radar suite to accomplish the role. It was not entirely intended as a direct dogfighting champion in the same mold as the more famous North American F-86 Sabre with its high performance, sleek line design and swept-back wings. The XF3D-1 could, therefore, be given a modest powerplant and straight wing appendages resulting in a more relaxed design.

The XF3D-1 was readied in early 1948 and achieved fist flight on March 23rd of that year (three prototypes were eventually completed). The USN saw what it liked and contracted for 28 x F3D-1 production systems as the "Skynight". Production was underway a short time later and deliveries began in June. The rather limited production numbers of the F3D-1 mark restricted their usage as Skyknight trainers while preparations were made for the improved "F3D-2" mark to follow. The F3D-2 was ordered by the USN in 1949.©MilitaryFactory.com
Advertisements

The definitive F3D-2 would be fitted with more advanced Westinghouse J46 series turbojet engines in revised nacelles as well as a more powerful radar search array. However, the J46 development was running into technical delays resulting in the basic J34-WE-36 series engines being substituted during production. Manufacture of this mark totaled 237 units through March 23rd, 1952. In service, the F3D-2 proved some 100 miles per hour faster than the original production mark and offered greater operational ranges twice that of the F3D-1, quickly outdistancing itself from her older sister. Provision for High-Explosive (HE) air-to-air rockets was added which served to broaden the tactical usefulness of the F3D family as a whole and a thicker bulletproof canopy was designed for improved crew protection. An automatic pilot lessened overall crew workloads and integrated wing spoilers were installed for improved rate-of-roll.

With the F3D-2 gaining traction, Douglas set out to develop an even more advanced and improved Skyknight variant with the expected J46 Westinghouse engines through the "F3D-3" production mark. Additionally, the airframe was revised to incorporate full swept-back wings making it a vastly more modern design in appearance. However, the technical issues of the J46 engine program continued which ultimately led to its cancellation. In turn, the proposed F3D-3 was written off.

On June 25th, 1950, North Korean forces, with the blessing of the Soviet Union and China, invaded the democratic South. The Korean Peninsula had been divided into two major zones followed the dismantling of the Japanese Empire at the end of World War 2. The North would be supported managed by the Soviet Union while the South would be largely influenced by the West - led by the United States of America. The surprise attack netted the North large swathes of territory before the advance was stalled and ultimately driven back by the United Nations coalition. The war ended in a loose armistice on July 27th, 1953 which remains to this day (2012) (technically the Korean War never "ended" hence the ongoing tensions in the region).

During the conflict, both sides utilized a mix of modern advanced weaponry coupled with decades-old designs emerging from (or even before) World War 2. As such, the Skyknight would face off against propeller-driven fighters and jet-powered aircraft as the norm. When not called for direct night-fighter patrol, interception or strike sorties, the aircraft was used as an escort platform for the Boeing B-29 Superfortress in night operations where its armament and onboard radar facility could be brought to bear. The war became home to the first jet-versus-jet fighter duals and the first night-time destruction of a jet aircraft (November 3rd, 1952) by a jet aircraft (a USMC F3D-2 over a Yak-15). The downing of four of the fabled Mikoyan-Gurevich MiG-15 "Fagot" jet-powered fighters were ultimately included in the Skyknight war total of six. The MiG-15 certainly held the performance edge with its speed, agility and swept-wing performance. However, in the dark of night, the Skyknight was king and its radar was utilized to good effect in searching and accurately neutralizing the communist aerial threat. USMC Skyknight aviators would eventually claim the highest tally of night-fighter kills in all of the Korean War all for the loss of one aircraft (Bick/Linton July 2nd, 1953).

By this time in American military history, the Skyknight had seen its best fighting days. The improved technology of missile weaponry made the cannon-armed interceptor a thing of the past - warplanners envisioned a future where all dogfighting would be settled at range through missile weapons (of course proven untrue in the Vietnam War to come). The USN and USMC commissioned for more advanced aircraft in time which resulted in a reduced role for the remaining Skyknight family. One of the more important developments at this time became the AIM-7 "Sparrow" medium-range air-to-air missile of which only 38 Skyknights (as the F3D-2M) were modified to carry and fire (4 x missiles, 2 to each wing). The aircraft series was gradually replaced as a frontline unit by more advanced types bringing an end to her high profile operations of old. Several received extended service lives thanks to modification as trainers for up and coming Radar Intercept Officers (RIO). In 1962, the American military coordinated to revise their aircraft marking system and this created the newer (and cleaner) "F-10" designation for the remaining operational F3D Skyknight family. As such, the F3D-1 and the F3D-2 aircraft still in circulation became the "F-10A" and "F-10B" respectively.

Despite their "background" existence, the Skyknight was still in play as the Vietnam War evolved to include evermore American involvement (Skyknights were actually brought out of retirement). F-10B airframes were outfitted with Electronic CounterMeasures (ECM) equipment and redesignated as "EF-10B" for the new role (formally known as "Electronic Reconnaissance and Countermeasures"). Many aircraft were pressed into service in whatever way imaginable during the war - the Douglas A-1 "Skyraider" of the Korean War and the A-26 "Invader" of World War 2 fame were also still in play to certain extents. EF-10B platforms were in operational service until 1970 to which the last USMC Skyknight mount was removed from service. This brought an end to the Skyknight operational life as a whole for the aircraft was never sold outside of the United States - leaving the USN and USMC as the sole operators of the type. Additionally ECM-minded Skyknights gave good service as reconnaissance platforms during the tumultuous moments of the 13-day "Cuban Missile Crisis" of 1962.©MilitaryFactory.com
Note: The above text is EXCLUSIVE to the site www.MilitaryFactory.com. It is the product of many hours of research and work made possible with the help of contributors, veterans, insiders, and topic specialists. If you happen upon this text anywhere else on the internet or in print, please let us know at MilitaryFactory AT gmail DOT com so that we may take appropriate action against the offender / offending site and continue to protect this original work.
Advertisements

(Showcased performance specifications pertain to the Douglas F3D-2 Skyknight production variant. Performance specifications showcased above are subject to environmental factors as well as aircraft configuration. Estimates are made when Real Data not available. Compare this aircraft entry against any other in our database or View aircraft by powerplant type)
STANDARD:
4 x 20mm Hispano-Suiza M2 cannons in lower forward fuselage. 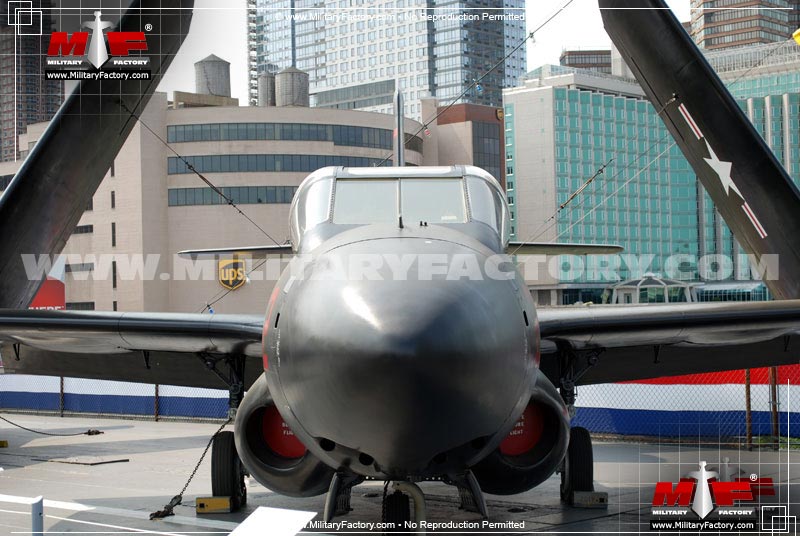 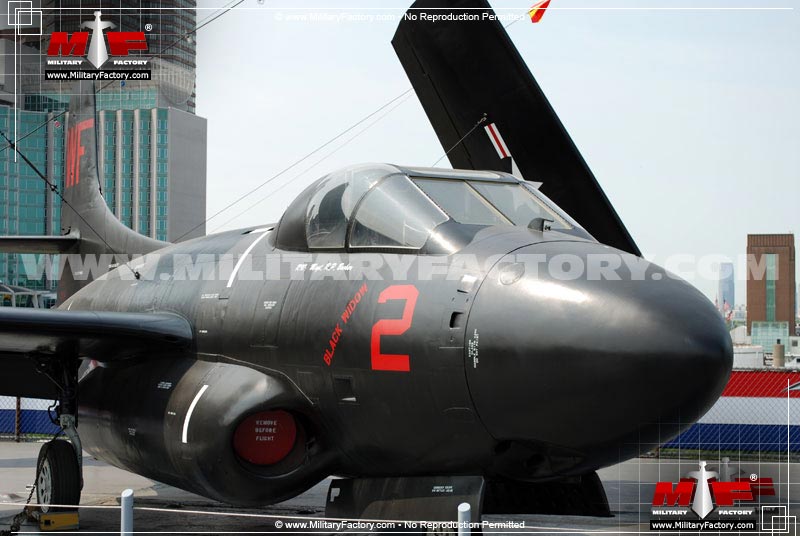 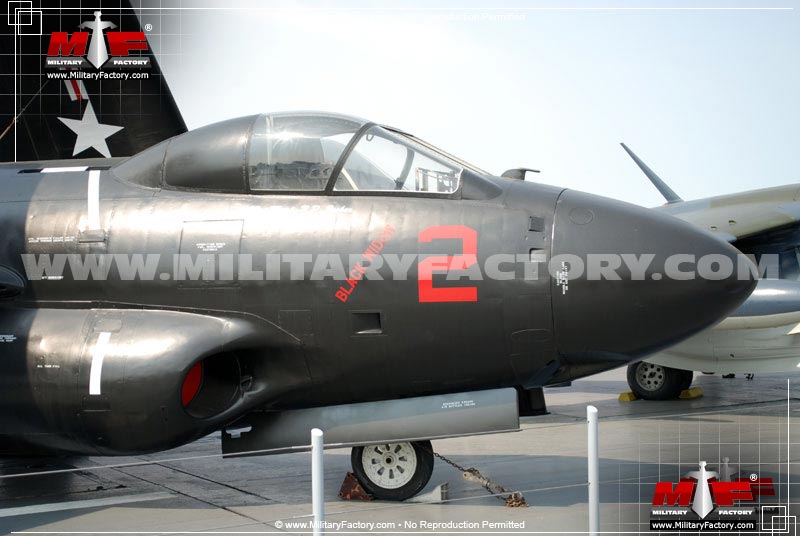 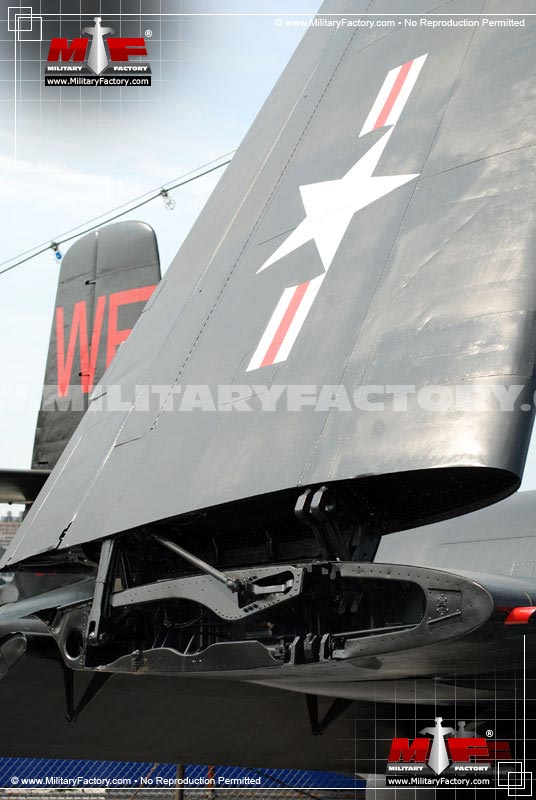 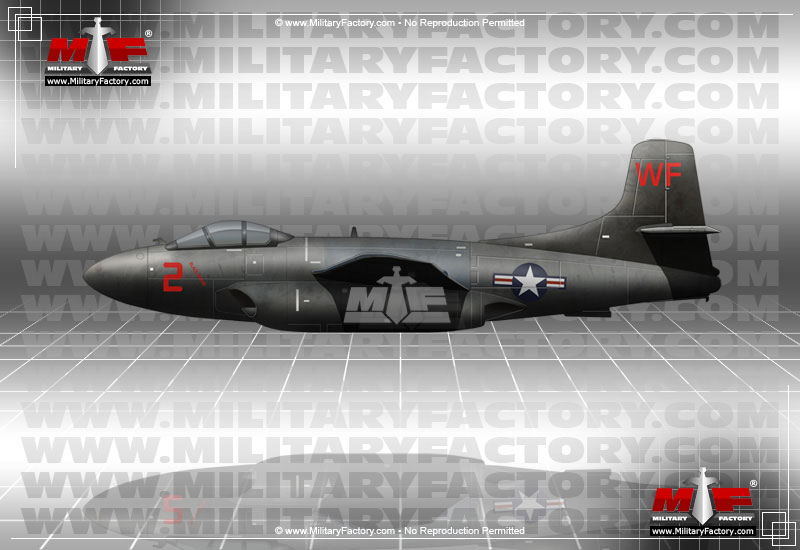