The Douglas A-24 Banshee was the U.S. Army version of the U.S. Navy SBD Dauntless dive bomber with a few changes to suit the service.

Authored By: Dan Alex | Last Edited: 05/25/2021 | Content ©www.MilitaryFactory.com | The following text is exclusive to this site. 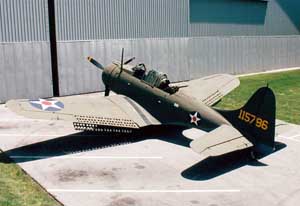 Prior to World War 2 (1939-1945), United States military aviation doctrine centered primarily on gaining complete air superiority over the enemy with a sound stock of "pursuit" fighters meeting the enemy head on. A secondary focus was provided to lightweight bomb delivery platforms and those that did emerge during the prewar period were typically shipped overseas to foreign customers like France, Britain, and the Dutch. However, all that changed when the Germans - through their Blitzkrieg of Western Europe - showcased the dive bomber in terrifying fashion through its shrieking Junkers Ju 87 "Stuka". The aircraft rained ordnance down on key targets and troop formations ahead of the main invading force - softening areas prior to involvement of ground elements. As such, the U.S. Army Air Forces (USAAF) quickly shifted its focus to acquiring strike platforms for the dive bombing role all its own.

Army officials preferred to stay away from more complex twin-engined designs and favored development of a single-engine, monoplane wing form utilizing a crew of two or three. Defensive armament was a must to help defend what would most likely be a slow-moving airplane. Several initiatives were pushed including the Douglas A-17, the Curtiss A-18, and the Vultee A-19 though none were winners in the Army search until the service took on a small stock of U.S. Navy Douglas SBD "Dauntless" dive bombers in July of 1940. With a few revisions - namely the deletion of the carrier deck arrestor equipment and replacement of Navy radio kits - the SBD was reconstituted for the Army in the new A-24 "Banshee" form. While not the complete solution for the Army, the Banshee would suffice until a proper aircraft was adopted. The initial Army mark was the SBD-3 (SBD-3A) model of the Navy as the "A-24" and the Army order was absorbed into the existing Navy order of July 1940. Army versions also replaced the solid tailwheels with pneumatic types for land-based take-offs and landings.

As with other American dive bombers of the period, the aircraft featured perforated dive brakes along its wing trailing edges to slow its drop when attacking. Self-sealing fuel tanks were a must as was armoring for self-preservation of crew and aircraft. As with the SBD before it, the Banshee used a modest machine gun armament as standard: 2 x 0.50 caliber heavy machine guns were fixed into the cowling for operation by the pilot and 1 x 0.30 caliber medium machine gun was added to a flexible mounting at the rear cockpit for protecting the vulnerable "six" of the aircraft. Like the SBD, the Banshee carried a crew of two - pilot and gunner. The aircraft's bombload was set across three available hardpoints - one under fuselage centerline and one under each wing. A typical load was 1 x 500lb / 1,000lb bomb under centerline or 1 x 100lb bomb at each wing station.
Advertisements

The first Banshees arrived in U.S. Army hands for June of 1941 and these were outfitted with Wright R-1820-52 radial engines of 1,000 horsepower. The Banshee's initial assignment was with the 27th Bombardment Group (Light) of Hunter Field, Georgia and training began in earnest. Three squadrons were ultimately formed during the early part of the war.

With the Philippines under threat from Japanese invasion, A-24s were routed to the islands to help strengthen the American defense there. However, the swift Japanese advance forced the A-24s to be rerouted to Australia for final assembly. When unpackaged, the A-24s were quickly found to be in very used condition from their training period earlier. Australian personnel quickly rebuilt the aircraft and added makeshift fixes to weak spots and even altogether missing components. Such was the condition of these aircraft that some had their worn out aviation tires replaced with standard truck tires!

The 16th, 17th, and 91st Bombardment Squadrons were formed in Australia in preparation for the defense of Java. Fifteen A-24s set out though only seven were combat worthy by the time of their arrival (these also lacked the needed self-sealing fuel tanks and armoring). From this lot, the aircraft fought against the odds and generated a poor early showing - limited operational ranges, lacking appropriate firepower, and becoming fodder to enemy fighters when not provided with escorts. The aircraft did manage several direct hits on enemy ships during the campaign prior to the Allied evacuation of Java. The remaining A-24s in Australia were now formed into the 3rd Bombardment Group and the 8th Bombardment Squadron when assigned to the defense of New Guinea. Losses continued to mount as showcased in a July 1942 sortie which saw seven A-24s launched and only one return home.

Despite the emerging combat record, the Army committed to the A-24 with another order in July 1942 - primarily because their order for A-25 "Shrike" aircraft (the Army version of the Navy's Curtiss SB2C "Helldiver") was running into delays. March 1943 saw further A-24s added to the Army stock as some were pulled from the existing U.S. Navy inventory - these forms were designated as A-24A and were equivalent to the SBD-4A with increased bomb-carrying capacity and an additional rear cockpit machine gun (2 x 0.30 caliber machine guns on the flexible mount). 170 pf this newer mark were procured in all, joining the original 168 A-24 models. The final Banshee form was the A-24B which was the SBD-5A and its Wright R-1820-60 radial engine of 1,200 horsepower. The Army optimistically contracted for 1,200 of these aircraft but netted only 615 from the order by the middle of 1943 as the service began a departure from the need for a dedicated dive bombing platform - fighter-bombers and medium bombers seemed more than up to the task for the USAAF. Final Banshee deliveries occurred in December of 1943.

A-24Bs were flown against the Japanese at the Gilbert Islands and these provided much better results than previously seen with the line. By the end of their service tenures, A-24s served in the training role for pilots and gunners and were further used as tow aircraft for aerial targets. The USAAF passed on some of its A-24 stock to the USMC who could make proper use a direct bombing platform in the Close Air Support (CAS) role. Foreign operators of the Banshee went on to become Chile (A-24B model, 12 examples), France (Free French Forces, as many as 50 examples), and Mexico (28).

As an interesting aside regarding the A-24, the U.S. Army tested a "shrieking" system (by Chrysler) to mimic the terrifying diving sound generated by attacking German Stukas over Europe. Needless to say, this feature was not implement into production A-24s.
Advertisements

General Assessment
Firepower
Performance
Survivability
Versatility
Impact
Values are derrived from a variety of categories related to the design, overall function, and historical influence of this aircraft in aviation history.
Overall Rating
The overall rating takes into account over 60 individual factors related to this aircraft entry.
50
Rating is out of a possible 100 points.
Relative Maximum Speed
Hi: 300mph
Lo: 150mph
This entry's maximum listed speed (250mph). 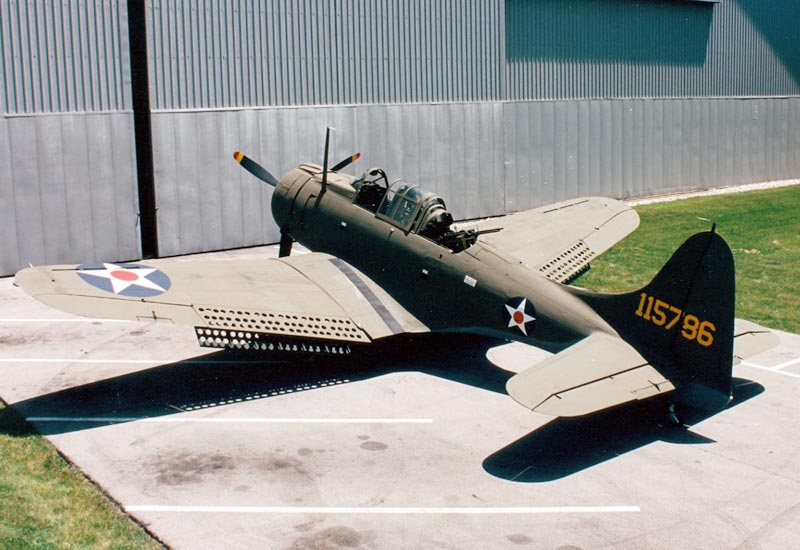 Image from the National Museum of the United States Air Force of Dayton, Ohio.
2 / 3 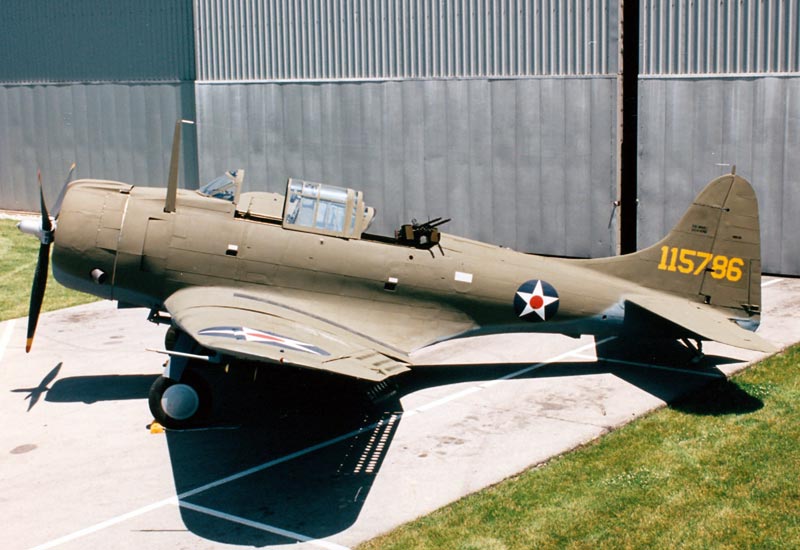 Image from the National Museum of the United States Air Force of Dayton, Ohio.
3 / 3 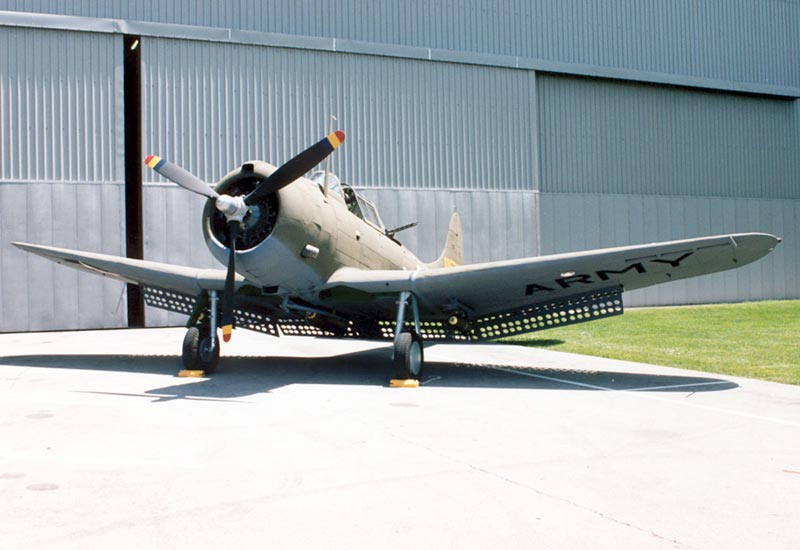 Image from the National Museum of the United States Air Force of Dayton, Ohio.
❮ ❯

Aviation developments of similar form and function, or related to, the Douglas A-24 Banshee...