Authored By: Staff Writer | Last Edited: 01/15/2018 | Content ©www.MilitaryFactory.com | The following text is exclusive to this site. 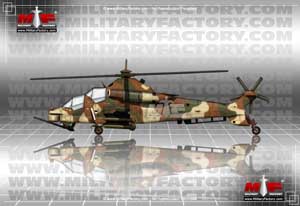 The Denel (then Atlas) AH-2 Rooivalk (translating to "Kestrel") was an ambitious and indigenous undertaking by the nation of South Africa. At the time of its development, the Rooivalk was heralded as one of the top performing and capable helicopters in existence and destined to become the best attack helicopters ever made. Unfortunately, cost overruns, limited production and no export orders have seen the system become a bloated and outdated design that is now in the hands of politics in deciding the fate of the machine.

The Rooivalk was born from a need of the South African Air Force to field a capable attack helicopter. Atlas (before becoming known as Denel) produced the XH-1 Alpha design to which served the company well in terms of developmental research. The XH-1 was based highly on the French-made Aerospatiale Alouette III system, though hardly a dedicated attack helicopter platform and still utilizing 1960's technology. XH-1 would flew in early 1986 followed by two converted XTP-1 Beta gunships in the form of Aerospatiale SA 330 Pumas (production versions of the Rooivalk would indeed feature the SA 330's transmission and rotor system), designed from the outset as test beds. Utilizing information gained form both test types, designs were being drawn up for the Rooivalk as early as 1984 with the initial flyable XH-2 Rooivalk getting airborne by early 1990. From the XH-2, two more developmental models appeared in XDM and EDM forms (see variants description down the page).

Production Rooivalks were being received by early 1999 with total deliveries being limited to just twelve examples. Naval versions were also under consideration, though many a setback has contributed to the projects delay and foreseeable demise. To any end, the Rooivalk would have been a major player on the foreign market would circumstances had been different at home and abroad. In any case, development of the Rooivalk - it being an indigenous undertaking - could yield some profitability for future home-bread attack helicopter designs by the African nation.

Design of the "production" Rooivalk produced something in the vein of the Italian Mangusta, with the pilot and gunner seated in a tandem seat cockpit. Short wing stubs offered up four hardpoints to which the Rooivalk could mount rocket pods or anti-tank missiles of the ZT6 Mokopa variety. Additionally, the wing stubs wingtips could support the French-made Mistral air-to-air missile system for self-defense. Standard armament included the chin-mounted Armscor F2 20mm cannon. Up to sixteen ZT6 anti-tank missiles could be carried, similar to the AH-64 Apache's use of the Hellfire. Twin powerful Turbomeca Makila 1K2 turboshaft engines powered a large four-blade main rotor and a five-blade tail rotor system.©MilitaryFactory.com
Advertisements

The delays and cost overruns have extensively hampered further production and any international interest in the form of export orders. The system remains outdated as it still retains computer technology that is some twenty years old. Additionally, the Denel company was suffering from financial unrest, scaring off any potential international sales who had a fear of purchasing the unit only to see its underlying support disappear in the future. Denel ties to the Eurocopter firm might save the Rooivalk project in that respect, though that kind of partnership remains to be seen seeing it that Denel was looking to sell Rooivalks on the export market knowing it was also selling French-made components in the process.

As of this writing, only 12 examples have been delivered with few in complete operational form. There are talks of either canceling the entire program in full and retiring the existing units or taking on another series of developmental versions and bringing out a new and up-to-date Rooivalk attack helicopter. The status of the future of the Rooivalk program is under debate.

The Rooivalk Mk 1.1 is a new standard in play that is set to modernize the existing AH-2 fleet. This will install a missile warning system as well as updated avionics. The work will take place from April 2017 on.

2013 marked the first combat operations for the Rooivalk series when three units were committed to the United Nations Force Intervention Brigade in the Democratic Republic of the Congo.

September 2016 - The Rooivalk's good showing against insurgents in the Democratic Republic of the Congo during its 2013 peacekeeping mission has given rise to talks concerning an export variant of the AH-2 - the Rooivalk Mk II.©MilitaryFactory.com
Note: The above text is EXCLUSIVE to the site www.MilitaryFactory.com. It is the product of many hours of research and work made possible with the help of contributors, veterans, insiders, and topic specialists. If you happen upon this text anywhere else on the internet or in print, please let us know at MilitaryFactory AT gmail DOT com so that we may take appropriate action against the offender / offending site and continue to protect this original work.
Advertisements

South Africa
(OPERATORS list includes past, present, and future operators when applicable)
✓ Ground Attack (Bombing, Strafing)
Ability to conduct aerial bombing of ground targets by way of (but not limited to) guns, bombs, missiles, rockets, and the like. ✓ Close-Air Support (CAS)
Developed to operate in close proximity to active ground elements by way of a broad array of air-to-ground ordnance and munitions options.

(Showcased performance specifications pertain to the base Denel AH-2 Rooivalk (Kestrel) production variant. Performance specifications showcased above are subject to environmental factors as well as aircraft configuration. Estimates are made when Real Data not available. Compare this aircraft entry against any other in our database or View aircraft by powerplant type)
STANDARD:
1 x 20mm Armscor F2 cannon in chin-mounted turret.

OPTIONAL:
Mission-specific ordnance can include any of the following:

(Not all ordnance types may be represented in the showcase above)
Hardpoint Mountings: 6 (including wingtip mounts) 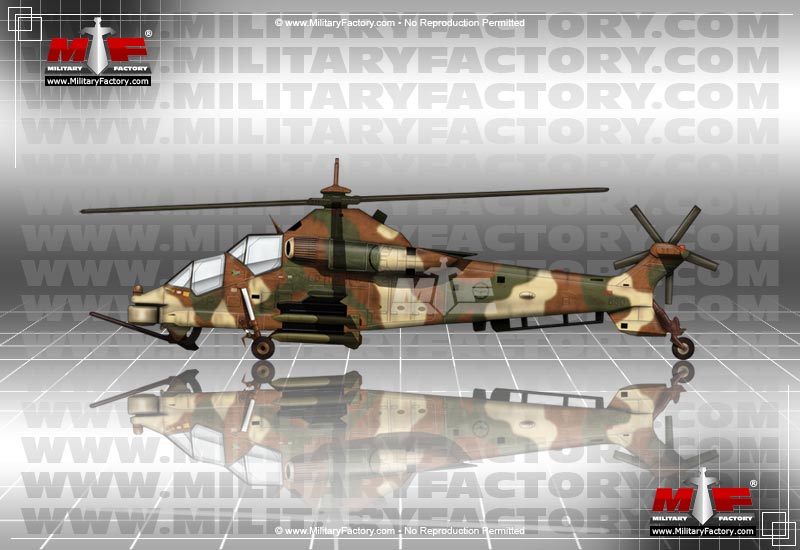