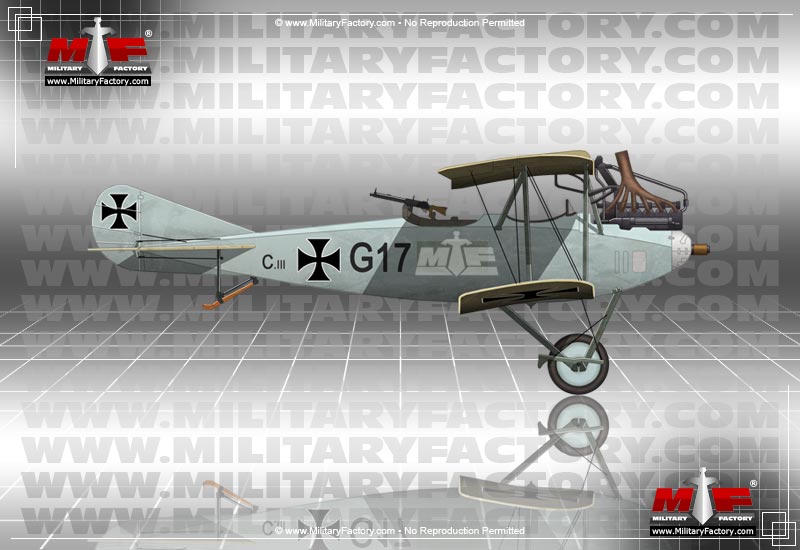 The effective Albatros C.III biplane became the most-produced of the C-type reconnaissance aircraft fielded by the Germans during World War 2.

Albatros built several "C-type" twin-seat reconnaissance biplanes for the German Air Service in World War 1 but none were produced to the levels of the Albatros C.III model introduced in 1916. By this time, the war had bogged down in the quagmire of trench warfare and any viable military weapon was in play to unseat the defender - including armed scouts which provided essential over-the-horizon reporting, observation of enemy movements far away, and engagement of targets of opportunity. Before her final days, the successful C.III model ended in the inventories of the German Empire, Bulgaria, Finland, Latvia, Lithuania, Poland, and the Ottoman Empire.

Continuing the long line of what essentially proved to be "short-term" reconnaissance biplanes, the Albatros C.III was an effort to improve upon the successes of the earlier C.I, itself an armed form of the original Albatros B.II model series. The C.I, however, flipped its crew with the pilot at front and the observer/gunner at rear. The C.III carried this design quality and followed the lines of the earlier designs quite closely. It retained the dual-bay biplane wing arrangement, forward-mounted engine, and conventional tail unit. Its undercarriage was fixed and consistent with the period, centered on two large main wheels and a wood tail skid. The engine mount was of particular note for its large exhaust manifold assembly emanating from the upper engine section, decidedly obstructing the forward view. A sole 7.92mm Spandau machine gun was set to the starboard side of the engine, synchronized to fire through the spinning, two-bladed propeller arrangement. The rear observer/gunner managed a trainable 7.92mm Parabellum machine gun to protect the aircraft's more vulnerable "six".

In practice, the C.III was a valuable aircraft for the German Air Service, capable of undertaking a variety of roles beyond that of reconnaissance flights. It could be outfitted with up to 200lb of internally-held drop stores for light bombing of valued targets. Its machine guns could also strafe unprotected ground targets as they were found. Handling and agility of the mount was deemed good and crews favored the C.III over all other C-type designs from Albatros. Its overall construction made for a robust military instrument which carried it through to the final days of the war - something of a rarity for early-war biplanes. Many existed after the Armistice and were forced to be handed over to the Allies for destruction or reissue to allied nations.

The C.III was deployed with one of two engine installations - one being a 150 horsepower Benz Bz.III and the other a 160 horsepower Mercedes D.III inline. Speeds reached approximately 87 miles per hour with a service ceiling of 11,000 feet and mission endurance window of about four hours. The Albatros C.VI was a variant of the C.III line which incorporated a 180 horsepower Argus As III series 6-cylinder inline. The new engine led to a reinforced engine mounting but provided a slight increase in performance - notably speed. Production of this variant was very limited. A floatplane form was also devised and this became the one-off Albatros W.2. These featured a Mercedes D.II engine with the applicable floatplanes added to the fuselage in place of its wheeled undercarriage.

OPTIONAL:
Up to 200lb of internal stores (bomb bay).