The AgustaWestland A129 Mangusta was designed from the outset to fulfill an Italian Army attack helicopter requirement.

Authored By: Dan Alex | Last Edited: 05/27/2021 | Content ©www.MilitaryFactory.com | The following text is exclusive to this site. 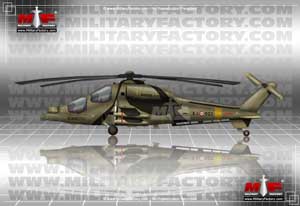 The Agusta A129 "Mangusta" ("Mongoose") is a modern Italian-designed and developed, two-seat, twin-engined battlefield helicopter developed specifically for the anti-armor/attack role. The aircraft was originally in development to a joint 1972 Italian Army and West German Army requirement for such an air vehicle when helicopter manufacturers Agusta of Italy and MBB (Messerschmitt-Bolkow-Blohm) of West Germany came together to flesh out a possible solution. However, the West German participation was short-lived, leaving Agusta to carry on solo.

In the beginning, the Agusta A109 product was targeted for modification until the program developed into the late 1970s to begat an all-new design. A slimmer, stepped-tandem-seat configuration was adopted as well as engines high-mounted onto the fuselage sides. Survivability was key to such a vehicle and armoring, weaponry and automation was integral to the final product - now designated the A129.

A working prototype went airborne for the first time on September 11th, 1983 and the Italian Army originally eyed some 100 total units. With the end of the Cold War in 1991, the attack helicopter requirement was not so pressing, leading to a reduction of A129 procurement to a more manageable 60 units with the first delivered in October of 1990. This then marked the first attack helicopter to be wholly designed, developed and produced in Europe. The Agusta brand label eventually evolved to become AgustaWestland and, thusly, the name is now carried by the still-in-service A129 product.

It bears mention that the attack helicopter became a mainstay of world militaries during the Cold War decades when the threat from masses of Soviet tanks in the East was very real, particularly across European territories. As such, many armed forces dedicated funding and developmental resources for delivering a mobile weapons platform to counter this threat. The A129 Mangusta, therefore, joined other like-systems in service during this period - perhaps the most famous of these being the American Hughes AH-64 "Apache" tank killer.

In the A129, seating for the two crew follows well-accepted attack helicopter doctrine which sees the weapons officer seated in the forward cockpit and the pilot in the raised, second offering at rear. Windscreens are glazed to minimize glint with the side panels ejecting during crash/emergency landings. The entire air frame is made "crash worthy" to an extent in an effort to preserve the crew as ejection seats are impossible in a helicopter design. Power was originally served through 2 x Piaggio (licensed Rolls-Royce) Gem 2-1004D turboshaft engines delivering up to 890 horsepower each while driving a four-bladed main rotor and two-bladed tail rotor (the latter facing portside). This provided the helicopter with a maximum speed of 170 miles per hour, a cruising speed of 155 miles per hour, a combat range out to 320 miles and a ferry range out to 620 miles on internal fuel stores. The helicopter also sported a service ceiling of 15,500 feet with a rate-of-climb nearing 2,025 feet per minute.©MilitaryFactory.com
Advertisements

Production of the first 45 units ended in 1992 and this was then followed by an improved form based on a new initiative - the A129 "International" - which numbered the final 15 examples. The new model brought about various design and systematic improvements to broaden inherent mission capabilities and performance qualities of the base Mangusta line. Its prototype went airborne for the first time on January 9th, 1995.

Armament of the Mangusta line has since grown to include a powered chin turret with the three-barreled, 20mm M197 Gatling-style cannon as standard. Other armament proved variable and displayed across two wingstubs with a pair of hardpoints afforded to each assembly. These hardpoints could accept up to 8 x BGM-71 TOW/AGM-114 "Hellfire" anti-tank missiles or 8 x "Mistral"/AIM-92 "Stinger" air-to-air missiles. Additionally, up to 4 x rocket pods (38 x 81mm OR 76 x 70mm unguided) could be carried as well as a mixed armament load to suit mission requirements (missiles and rockets for example). The hardpoints were also cleared to carry 12.7mm machine gun pods as required, increasing the platform's battlefield versatility.

In all, there have been just four major A129 marks beginning with the original A129 models. The A129 "International" mark brought about use of a five-bladed rotor assembly as well as a chin turret mounting the M197 Gatling gun. Avionics were upgraded for the better and the powerplants improved to a pair of LHTEC T800 series turboshaft engines. Its weapon systems also supported the launching of American TOW/Hellfire anti-tank missiles and short-ranged Stinger air-to-air missiles. The follow-up A129CBT ("ComBaT") therefore included many of the A129 International's realized features as well as an uprated transmission arrangement while still retaining use of the original Rolls-Royce Gem 2 series engines.

All original A129s have been modernized to the A129CBT standard. A newer, armed reconnaissance standard is the ARH-129D of which the Italian Army hopes to upgraded from twenty-four existing A129 airframes and purchase a further twenty-four helicopters in time.

The most modern offshoot of the Mangusta is now the Turkish-derived T-129 "ATAK" which is based on the Italian Army's A-129CBT model. It is intended as a local attack helicopter solution and will make use of Turkish designed avionics software and missile/mission systems. The T-129 is still under development (as of March 2014) by TAI (Turkish Aerospace Industries).

There have been several proposed - yet ultimately abandoned - A129 initiatives throughout the Mangusta's service life. These included a troop-carrying armored transport gunship (similar in tactical scope to the Soviet/Russian "Hind" series), an over-water maritime assault version for interested navies, an armed scout model and a multi-role/multi-mission offering. None were furthered.

As such, the only current operators of the A129 series remain Italy and - soon to join them - Turkey. To date, combat service of Mangustas has centered around United Nations initiatives including peacekeeping/support initiatives across Afghanistan, Angola, Iraq, Macedonia and Somalia.

January 2017 - The Italian Army hopes to retire its existing stock of A129 attack helicopters in or around 2025. Leonardo has been contracted to develop a successor with advanced capabilities.©MilitaryFactory.com
Note: The above text is EXCLUSIVE to the site www.MilitaryFactory.com. It is the product of many hours of research and work made possible with the help of contributors, veterans, insiders, and topic specialists. If you happen upon this text anywhere else on the internet or in print, please let us know at MilitaryFactory AT gmail DOT com so that we may take appropriate action against the offender / offending site and continue to protect this original work.
Advertisements

Italy; Turkey (T-129 development)
(OPERATORS list includes past, present, and future operators when applicable)
✓ Ground Attack (Bombing, Strafing)
Ability to conduct aerial bombing of ground targets by way of (but not limited to) guns, bombs, missiles, rockets, and the like. ✓ Close-Air Support (CAS)
Developed to operate in close proximity to active ground elements by way of a broad array of air-to-ground ordnance and munitions options.

(Showcased performance specifications pertain to the Leonardo A129 Mangusta production variant. Performance specifications showcased above are subject to environmental factors as well as aircraft configuration. Estimates are made when Real Data not available. Compare this aircraft entry against any other in our database or View aircraft by powerplant type)
STANDARD:
1 x 20mm M197 Gatling gun in powered chin turret

OPTIONAL:
Mission-specific ordnance may include any of the following: 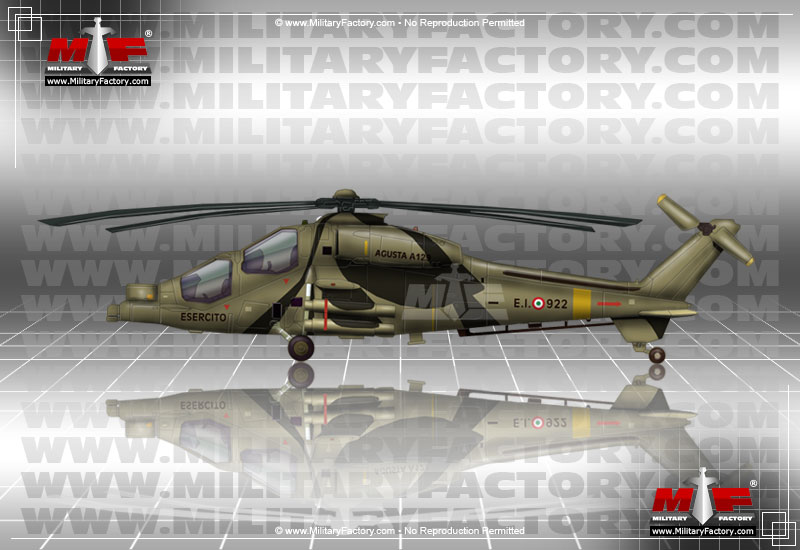 Aviation developments of similar form and function, or related to, the Leonardo A129 Mangusta (Mongoose)...