The Macchi MC.200 Saetta represented one of the new generation of Italian-produced, piston-engine fighters eventually used in World War 2.

Authored By: Staff Writer | Last Edited: 01/07/2018 | Content ©www.MilitaryFactory.com | The following text is exclusive to this site. 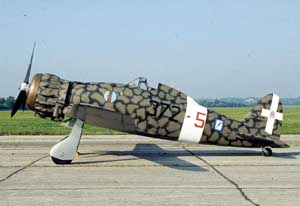 The Macchi C.200 Saetta ("Lightning" or "Arrow") became a hugely important contributor for the nation of Italy during World War 2 - both as a "first-generation", all-modern metal monoplane fighter and as a combat warplane. The model begat a line of progressively successful, and more powerful, fighters that included the C.202 Folgore ("Thunderbolt") and C.205 Veltro ("Greyhound") detailed elsewhere on this site. Design of the C.200 was attributed to Mario Castoldi whose prewar experience came from record-setting floatplane racers and this exposure served the C.200 project well in developing a refined, streamlined fighter design ultimately limited only by performance and its light armament. Despite this, it proved an extremely agile fighter for the period as well as a stable gunnery platform while supplying excellent climbing and diving capabilities. These qualities allowed it to be adapted to roles beyond that of fighter and it saw service in bomber-escort, fighter-bomber, trainer, and interceptor roles by war's end. Production yielded a total of 1,153 aircraft with the last formally retired in 1947.

The C.200 was being developed as early as 1935 to a Regia Aeronautica (Italian Air Force) fighter requirement against other competing types. Castoldi's background as a racing aircraft engineer meant that the new Italian fighter would be well-streamlined in many respects, its contours set around a massive radial piston engine at front. The design would incorporate several modern qualities about it - an enclosed cockpit, monoplane wings, a retractable undercarriage, and stressed metal skin. A prototype was ready for 1937 and made its first flight on December 24th.

Power came from a Fiat A74 RC38 14-cylinder air-cooled radial piston engine developing 870 horsepower while driving a three-blade propeller unit in a "puller" configuration. This engine stayed the aircraft's primary installation for the duration of the war. Performance indicated a maximum speed of 315 miles per hour with a range out to 355 miles. The aircraft's service ceiling was 29,200 feet with a rate-of-climb reaching 3,030 feet per minute.

Further flight testing revealed some stability issues but and these were addressed with needed changes. On the whole she proved a wholly viable mount showcasing maneuverability, fast-climbing, and a robust airframe - though she was not particularly fast when compared to her contemporaries. The pilot's position at center was slightly elevated for better viewing over the nose. The wing mainplanes were set ahead of midships with the cockpit over center of the fuselage design. The engine was encased in a compartment at front with a short tail section installed at the rear. The tail exhibited the usual single vertical tail fin and low-set tailplane arrangement typical seen in World War 2 fighters. The undercarriage was of a "tail-dragger" arrangement. A sliding canopy was fitted over the cockpit and rested over the raised fuselage spine when opened for entry/exit.
Advertisements

The armament of just 2 x 12.7mm heavy machine guns ultimately proved a limiting factor by the end of the C.200's story - though this arrangement was in keeping with traditional armament installations for many fighters of the period. The machine guns were fitted to the upper nose area over the engine and were further synchronized to fire through the spinning propeller blades.

In 1938, Regia Aeronautica authorities reviewed the competitors and decided on the C.200 prototype for serial production. This then began in June of 1939 - just months before the outbreak of World War 2 in September - and ran into July of 1942 with a total of 1,153 aircraft being built. Of these, Macchi factories only produced about 345 as Breda and SAI Ambrosini facilities covered the needed rest of the Regia Aeronautica order. First examples were delivered during July 1939 and factories outputted some 144 by September 1st - the date of the German invasion of Poland to mark the official start of the war. Between the end of the year and the fall of the next, the aircraft was revised, losing its sliding canopy assembly - at the behest of Italian pilots - and being given modified wings for improved control. The original canopy had proven dangerous to a bailing pilot so a new glazed version was introduced that incorporated an open-air top panel. The new wing corrected an autorotation problem seen in early aircraft of the series. These delays meant that operational-level numbers were not achieved until late 1940.

The C.200 soldiered along for the Italian Air Force across all major fronts in World War 2. Its first actions were against the British at Malta and they then supported the Italian invasion of Greece. Units also covered Axis operations across North Africa and flew operationally over Yugoslavia before participating along the East Front against the Soviet Union. It remained in frontline use until 1942 before given up in favor of higher-performance alternatives - namely the Macchi C.202.

With a reduced-role status, the fighter was minimally converted for duty as a fighter-bomber, carrying bomb loads between 250lbs and 660lbs under the wings. The standardized 2 x 12.7mm machine gun armament remained consistent despite its limited punch. Outperformed in the dogfighting role by the new speedier mounts being fielded by the Allies, the C.200 could still serve as a capable bombing platform. Other roles pressed onto the series then included interception over Italian airspace and bomber escort for as long as the Air Force continued its bombing campaign.

Italy's participation as an Axis power came to an end in September of 1943 with its surrender to the Allies. This spawned the Ally-aligned co-belligerent forces as well as the Axis-aligned Rupibblica Sociale Italiana. By this time, only 52 C.200 aircraft remained in service and 23 were claimed by co-belligerent forces while some eight examples served with the Axis. When their combat usefulness had expired, C.200s saw final service as trainers for new generations of Italian airmen. Some were also taken on - though in limited numbers - by the German Luftwaffe though their contribution was minimal.

Attrition and limited production figures eventually left few Saettas by the end of the war and these did not exist long into the post-war years - the last airframe retired in 1947. A whole example is on display at the United States Air Force Museum of Dayton, Ohio, USA for appreciation.
Advertisements

Kingdom of Italy; Nazi Germany
(OPERATORS list includes past, present, and future operators when applicable)
✓ Air-to-Air Combat, Fighter
General ability to actively engage other aircraft of similar form and function, typically through guns, missiles, and/or aerial rockets. ✓ Interception
Ability to intercept inbound aerial threats by way of high-performance, typically speed and rate-of-climb. ✓ Ground Attack (Bombing, Strafing)
Ability to conduct aerial bombing of ground targets by way of (but not limited to) guns, bombs, missiles, rockets, and the like. ✓ Training (General)
Developed ability to be used as a dedicated trainer for student pilots (typically under the supervision of an instructor).

(Showcased performance specifications pertain to the base Macchi C.200 Saetta (Lightning) production variant. Compare this aircraft entry against any other in our database or View aircraft by powerplant type)
STANDARD:
2 x 12.7mm Breda-SAFAT machine guns in engine cowling.

OPTIONAL (Model Dependent):
Between 250lbs and 650lbs of externally-carried drop ordnance under the wings. 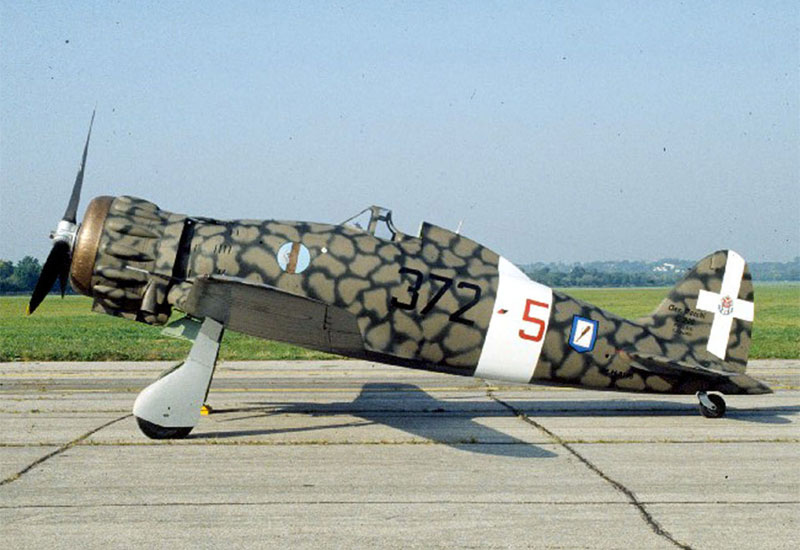 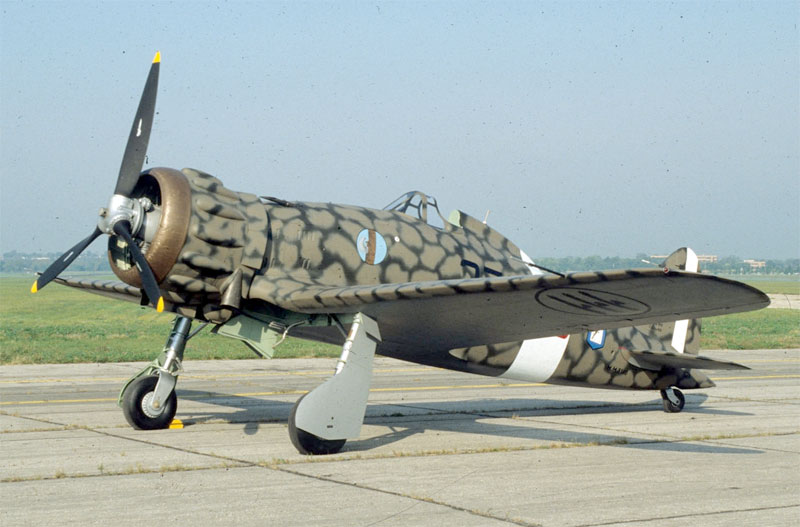 Front left side view of the Macchi C.200 Saetta fighter on display; color
3 / 8 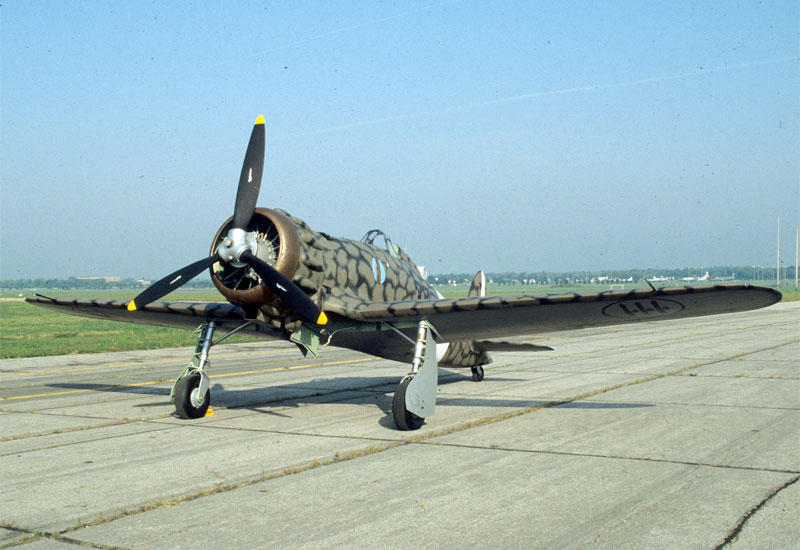 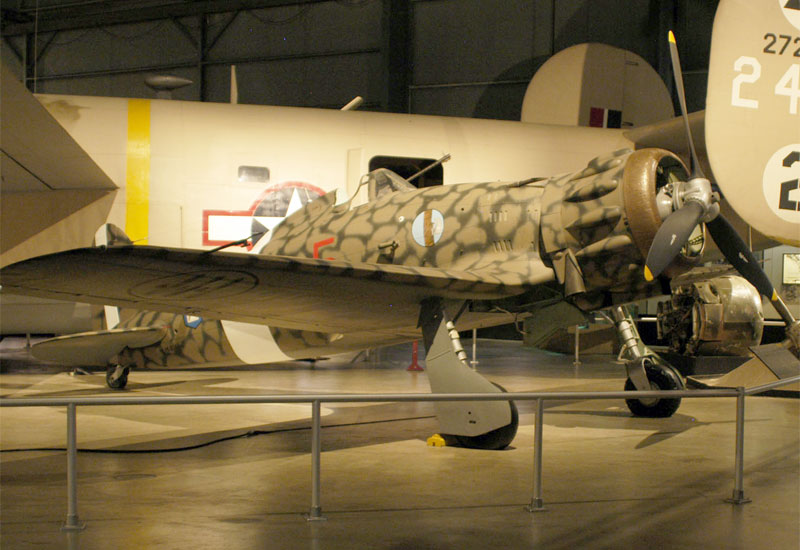 Front right side view of the Macchi C.200 Saetta fighter on display at the USAF Museum; color
5 / 8 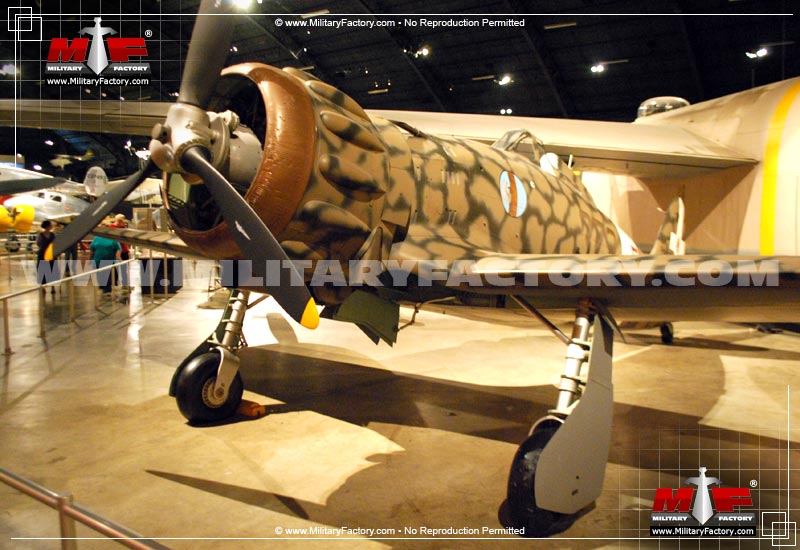 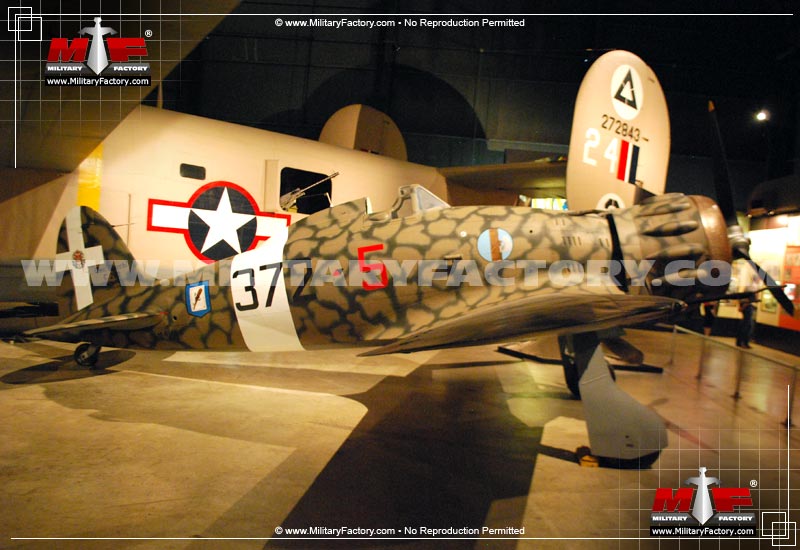 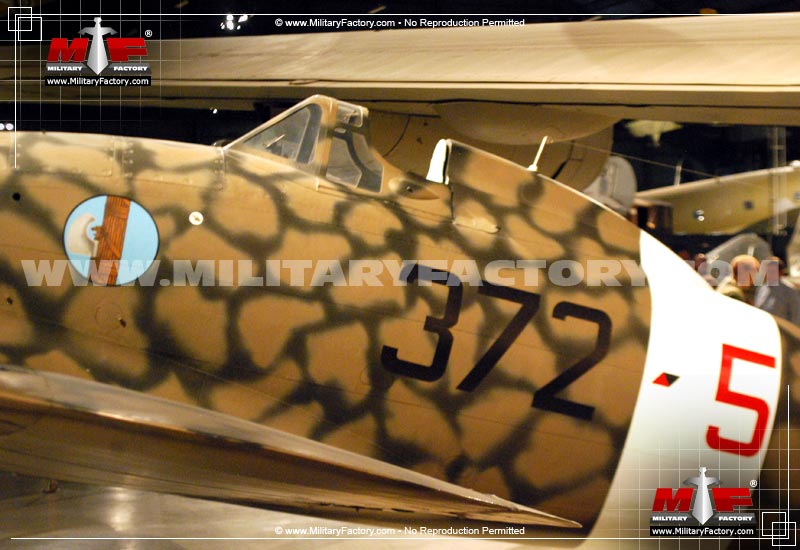 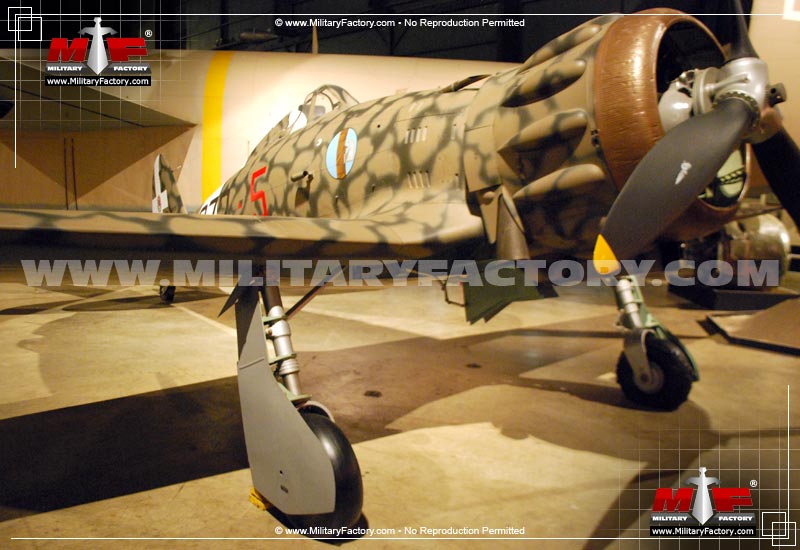