The Grumman F9F Panther was used extensively by the USN and USMC during the Korean War before some were passed on to the Argentine Navy.

Authored By: Staff Writer | Last Edited: 10/24/2017 | Content ©www.MilitaryFactory.com | The following text is exclusive to this site. 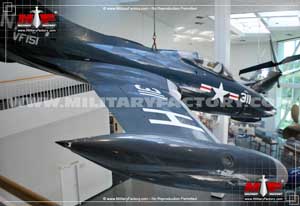 Grumman managed a long-standing tradition of successfully fulfilling US Navy carrier-based fighter requirements. It developed the propeller-driven F4F Wildcat which was used extensively in the early stages of World War 2 and followed this with the war-winning F6F Hellcat which proved more than a match for Japanese "Zeroes". The powerful prop-powered F7F Tigercat then followed and the fighter line culminated in the excellent "swing-wing" jet-powered F-14 Tomcat of the Cold War years. During the Vietnam War, Grumman delivered its A-6 Intruder strike class which made a legacy for itself when launching from American carriers against North Vietnam targets. The company also developed various over-water, carrier-based transport aircraft, specialized systems platforms and a line of civilian airframes to further pad its resume. However, it was the F9F "Panther" carrier-based fighter that not only became the first jet-powered fighter of note for the United States Navy but the first jet fighter designed, developed and produced by the Grumman concern. To further solidify its position in American military aviation, the Panther was also taken on by the storied Blue Angels aerobatic demonstration team (until 1954).

Like most early jet-powered aircraft, the Panther was born in the latter stages of World War 2 during a time when the turbojet engine was just beginning to take shape through notable work occurring in America, Britain, Germany and the Soviet Union. The United States Navy had already begun looking to the future when it commissioned for a jet-powered fighter to serve on its carrier decks, armed with radar for self-tracking of potential targets while being capable of combat service in both day and night environments and all-weather scenarios.

To fulfill this lofty order, Grumman began work on a design (the G-75) fitted with four turbojet engines mounted in nacelles at the wings as the "XF9F-1" prototype. The airframe also included two crew. Four engines were necessary due to the rather low output exhibited by early turbojet engines. However, the use of four engines was a rather restrictive design feature on an aircraft intended for the space-strapped American carriers so it was, with good fortune, that advancing engine technology soon allowed the required output from a simplified twin-engine configuration - and the second crewmember was also dropped from the design. The revised prototype (USN XF9F-2, Grumman Model G-79) went airborne for the first time on November 24th, 1947. However, the two intended engines had not yet been installed, the airframe instead making use of a single British Rolls-Royce Nene for basic flight testing.
Advertisements

Pratt & Whitney was charged with serial production of the Nene under the "J42" designation. As early turbojets proved thirsty systems, it was decided that the XF9F should incorporate wingtip fuel tanks for additional fuel storage and, thusly, increased operational ranges. Considering carrier-based aircraft often operated over large spans of endless ocean, this was something of a requirement. Wingtip fuel tanks were officially tested on a prototype in February of 1948. The added weight unexpectedly increased the roll rate of the airframe which proved an added advantage, particularly in a close-ranged gun fight. Testing of the tanks proved successful and it was adopted as a standard fitting for the upcoming production forms.

Carrier trials involving prototypes were completed in March of 1949 to which the series was cleared for service as the F9F-2 "Panther" in September of that year. Examples were established in USN service by May of 1949.

The Panther was designed around a deep, tubular fuselage housing the cockpit, turbojet engine, fuel stores and available avionics. The engine aspirated through triangular side intakes and exhausted through a single ring at the base of the tail. The cockpit was set ahead of amidships with a single-piece forward windscreen and a large-area, rearward-sliding canopy section overhead allowing for excellent views out of the cockpit. The empennage featured a single vertical tail fin detailed with high-mounted tailplanes. The main wing appendages were low-set along the fuselage sides and formed as extensions of the intake ducts making up the wing roots. These wings were straight in their general design and each were capped by the aforementioned fuel tank pods. As a carrier-based aircraft, the wings were also designed to fold upwards along a hinged section outboard of the intake ductwork. Another carrier aircraft quality was the installation of a tailhook for the required short-distance landing. The undercarriage was wholly retractable and featured a pair of single-wheeled main legs and a single-wheeled nose leg.

Two initial prototypes were completed under the XF9F-2 designation. This was then followed by the third prototype - XF9F-3. Original production models became the F9F-2 and all were powered by a Pratt & Whitney J42 series turbojet engine. F9F-2B was used to signify F9F-2 models that were given underwing rocket/bomb racks for the ground attack role. Once earlier F9F-2 marks were updated to the F9F-2B standard, the B-designation was officially retired.

The F9F-2B was powered by the Pratt & Whitney J42-P-8 turbojet engine outputting 5,700lbs thrust (the license-built British Nene turbojet). Performance figures included a maximum speed of 545 miles per hour, a service ceiling of 44,600 feet and range of 1,353 miles. Rate-of-climb measured 5,140 feet per minute. Dimensions included a length of 37 feet, 3 inches, a wingspan of 38 feet and a height of 11 feet, 4 inches. Armament was 4 x 20mm cannons and support for up to 2,000lbs of underwing ordnance. The aircraft featured an empty weight of 10,000lbs and a maximum take-off weight of 19,500lbs.

The F9F-2P was a dedicated photographic reconnaissance mount lacking armament. These versions were born out of necessity during the Korean War (1950-1953).

The F9F-3 was a new variant powered by an Allison J33 turbojet engine. This mark was actually developed in the event that the Pratt & Whitney J42 series engines failed to prove themselves as planned. Some fifty-four F9F-3 mounts were completed in all though this collection was later re-engined with the standardized J42 once the Pratt & Whitney powerplant successfully cleared evaluations.

The XF9F-4 was a one-off prototype that led directly to the F9F-4 production model. The F9F-4 was an improved Panther granted a lengthened fuselage which allowed for increased fuel storage and, therefore, improved operational ranges to a certain extent. These retained the J42 series engines though now included a blown-air arrangement which worked with slot flaps providing better controlled approach speeds.

The F9F-5 then followed and these were essentially F9F-4 airframes outfitted with the Pratt & Whitney J48 engine (licensed version of the British Rolls-Royce RB.44 "Tay"). A total of 616 were produced to this standard, becoming the quantitative mark of the whole Panther series. Additionally, the variant included a water injection system to increase thrust output to 7,000lbs. The F9F-5 began deliveries in 1950 and these officially completed in 1953. As in the earlier F9F-2P, the F9F-5P variant was an unarmed photographic reconnaissance model fitting cameras in a lengthened nose assembly. Thirty-six of this version were produced.

The F9F-5K were decommissioned F9F-5 Panthers used as unmanned target drones. The F9F-5KD was a drone director and these were later redesignated to DF-9E during the 1962 US aircraft nomenclature restructuring.

The F9F became the US Navy's quantitative jet-powered fighter of the Korean War where it managed to record a healthy 78,000 combat sorties by the end of the fighting. The Panther drew the first USN air-to-air kill of the war when an F9F downed a communist North Korean Yakovlev Yak-9 fighter on July 3rd, 1950, this Panther (F9F-2B) launching from the USS Valley Forge as part of VF-51 ("Sundowners"). Primarily utilized in the ground attack role throughout the conflict, the Panther nonetheless was successful in bringing down the highly-vaunted MiG-15 jet fighter on several occasions (seven in all, the first on November 9th, 1950). Lieutenant Royce Williams achieved the outstanding feat of bringing down four such MiG fighters which, in retrospect proved quite a feat as these were later revealed to be piloted by Russian Navy aviators as opposed to the poorer-quality North Korean pilots. The United States Marine Corps became the other active participant in the theater and utilized their F9Fs in similar fashion. Overall, Panthers proved a strong addition to UN actions over the peninsula. Models that served in the war were of the F9F-2, -3 and -5 marks.

The End of the Line

The Panther enjoyed operational service with USN squadrons up until 1956 before being retired in full by 1958. The Panther was pressed into service as jet trainers for new generations of naval and marine aviators and were then passed on to reserve units. Twenty-four aircraft were then purchased by the Argentine Navy in 1958 though utilized as land-based attack aircraft during their career overseas (Argentina became the sole export operator of the series). Some Panthers were pressed into combat service during the "Argentine Navy Revolt" of 1963 and in the border actions of 1965 against neighboring Chile. By the late 1960s, the Argentine Navy had moved to upgrade their stocks and took on the Douglas A-4 Skyhawk instead, leaving the Panther to retirement in 1969.

In all, 1,382 Panther aircraft were delivered by Grumman. The line was notably evolved in the similar F9F "Cougar" series which exhibited a near-identical form save for its swept-wing surfaces. The use of swept-wings was pressed by the success of the MiG-15 in the Korean War which more or less rendered straight-wing jet fighter aircraft somewhat obsolete. The Cougar first flew in 1951 and production totaled a 1,392 units - its primary users (again) becoming the USN, the USMC and, eventually, the Argentine Navy.
Advertisements

(Showcased performance specifications pertain to the Grumman F9F-2B Panther production variant. Compare this aircraft entry against any other in our database or View aircraft by powerplant type)
STANDARD:
4 x 20mm M2 cannons in nose

Up to 2,000lbs of external stores held underwing. 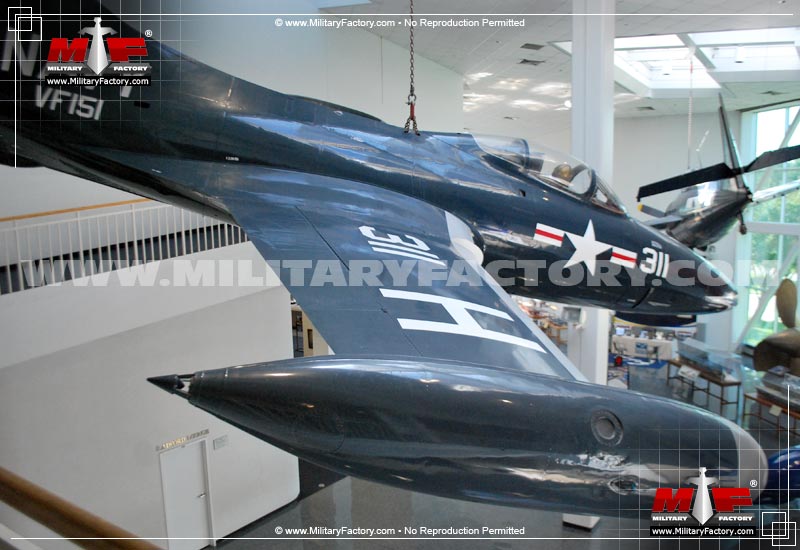 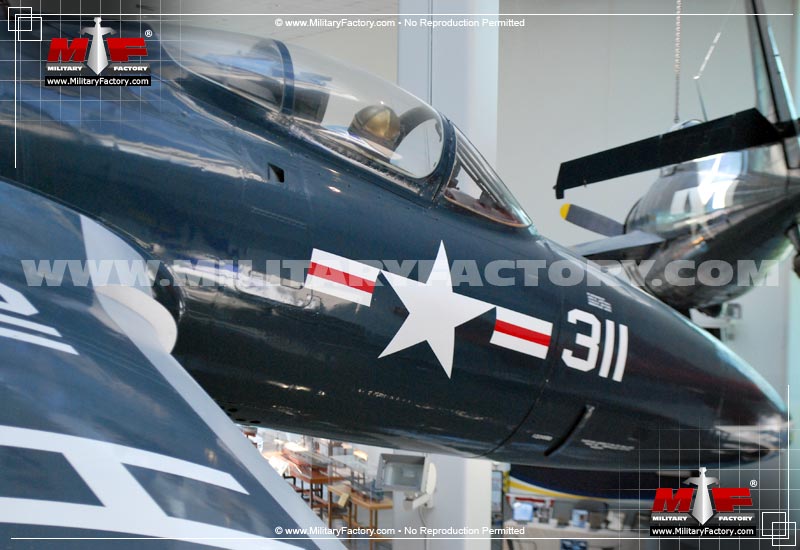 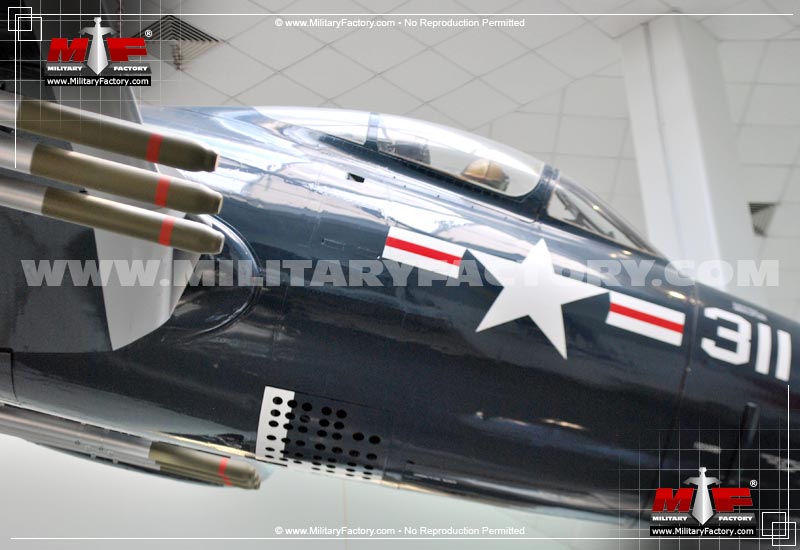 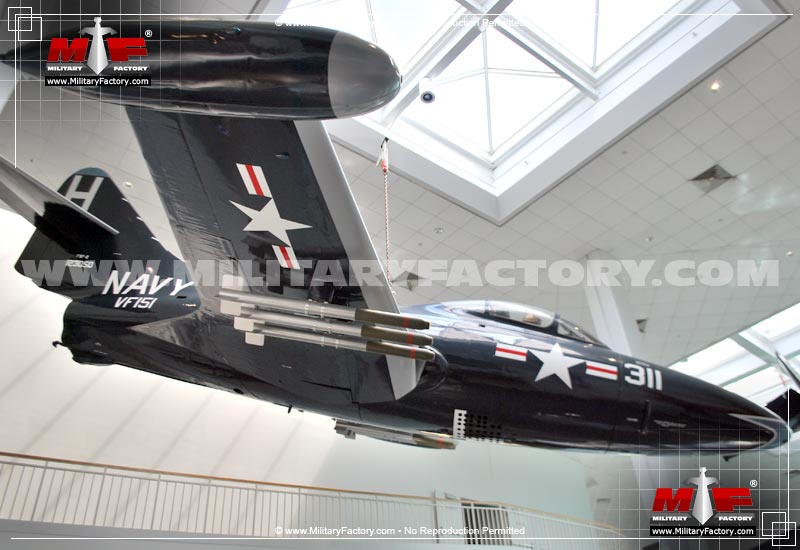 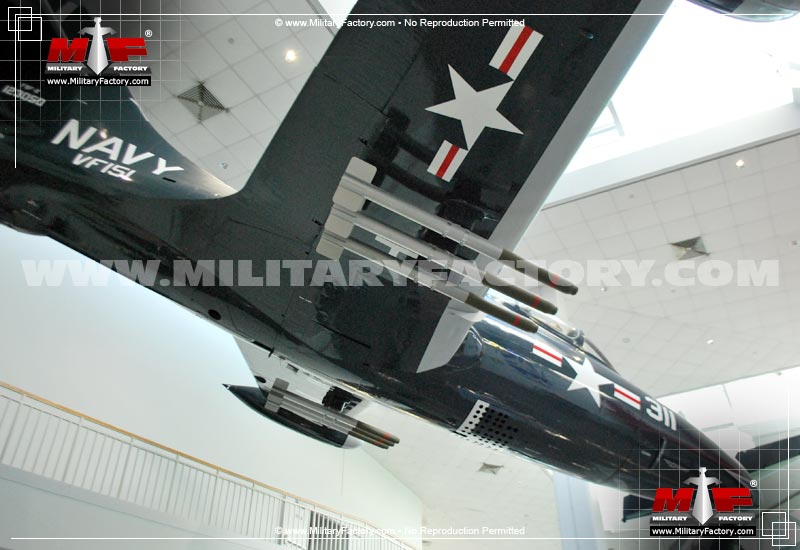 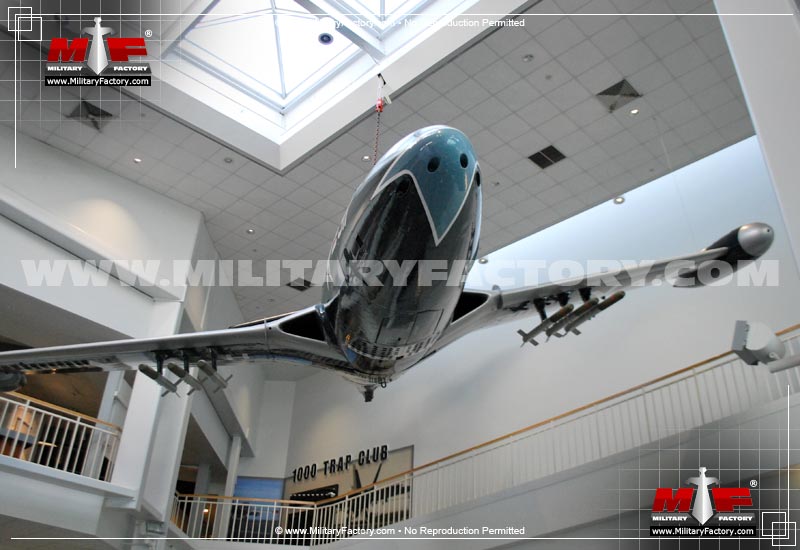 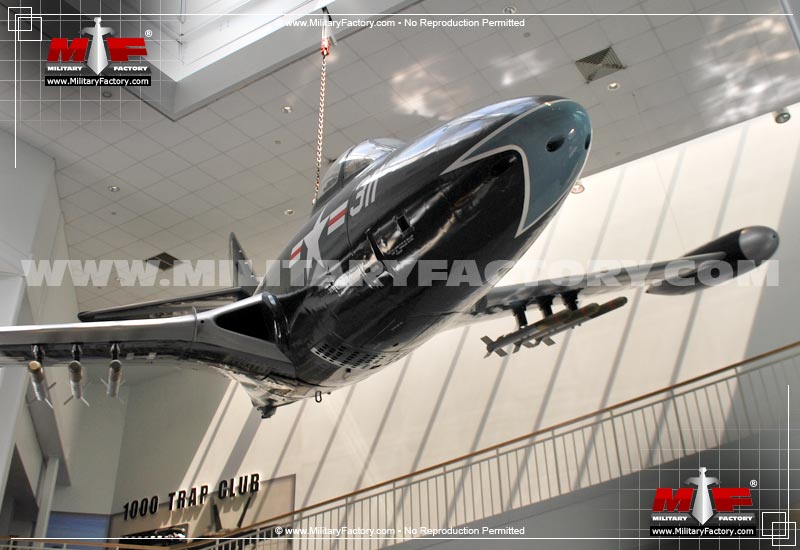 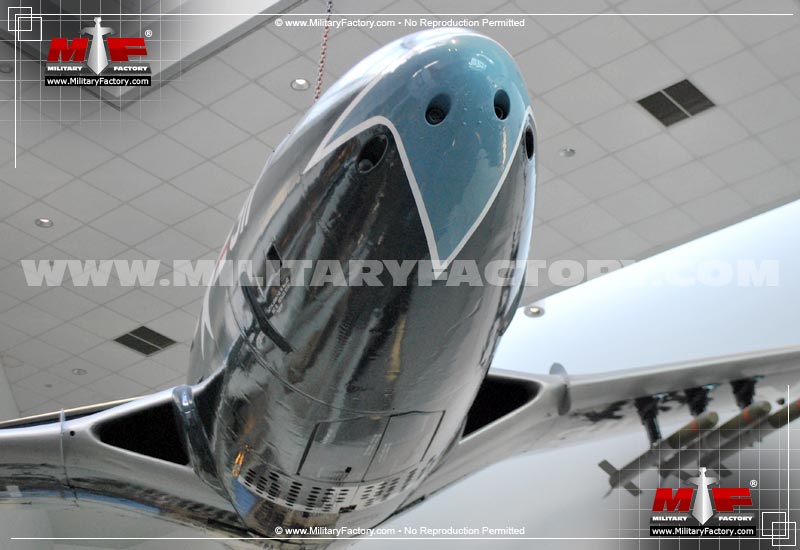 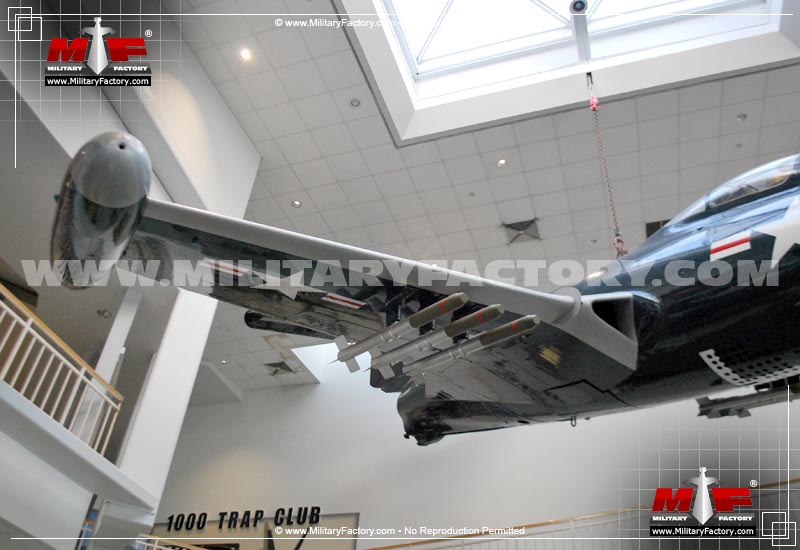 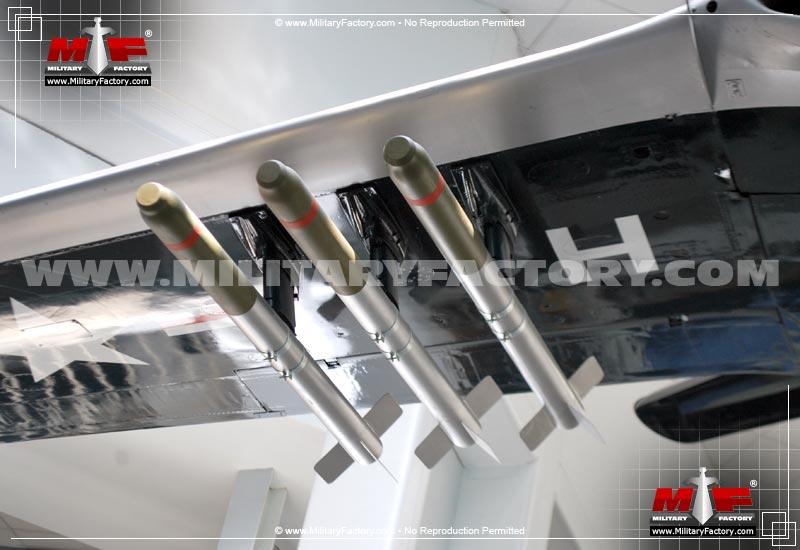 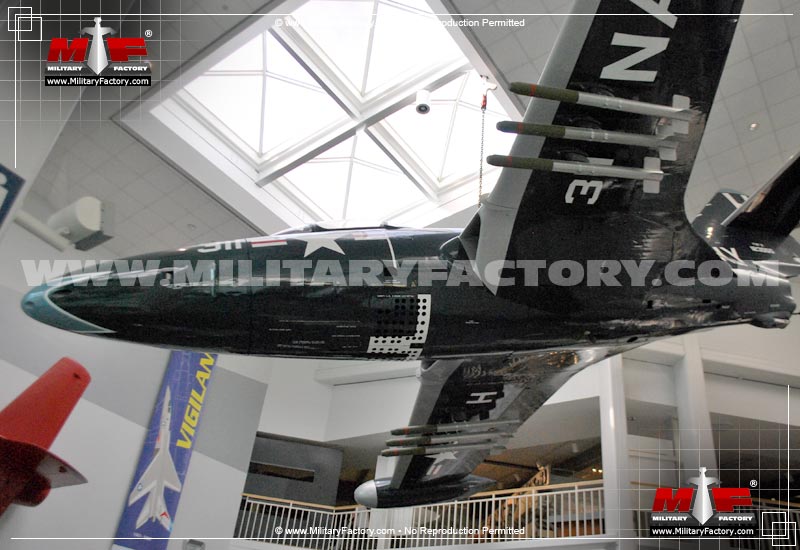 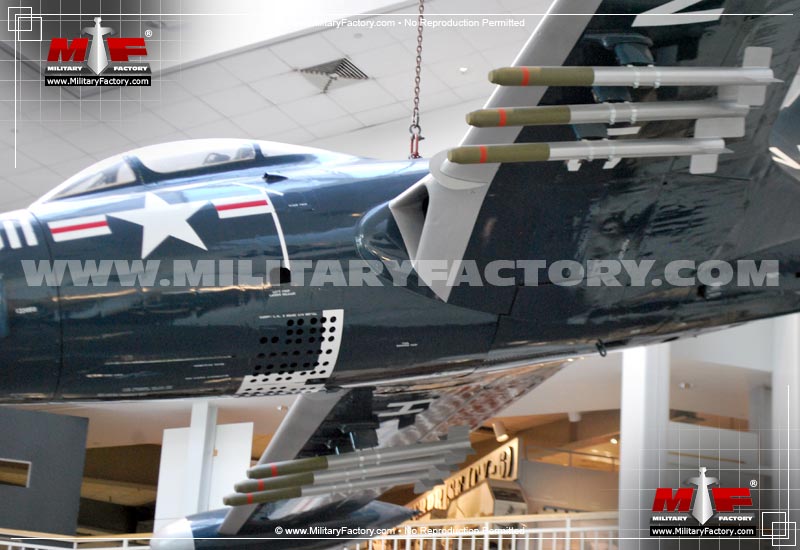 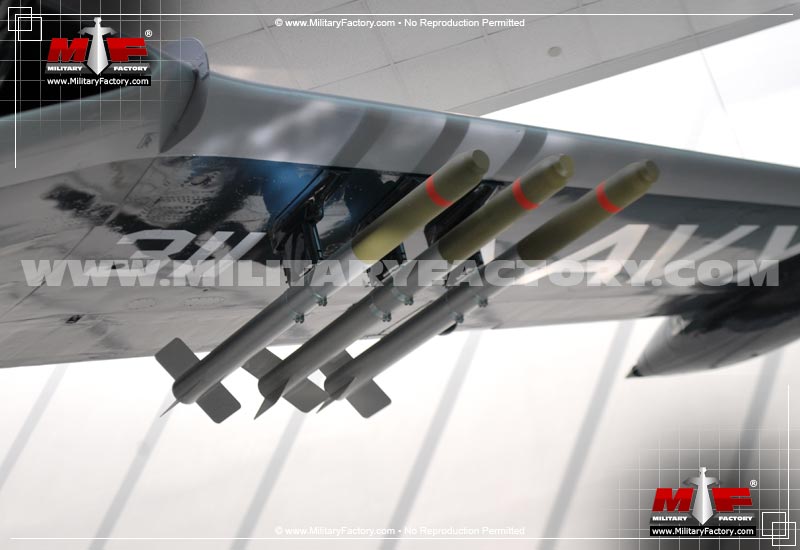 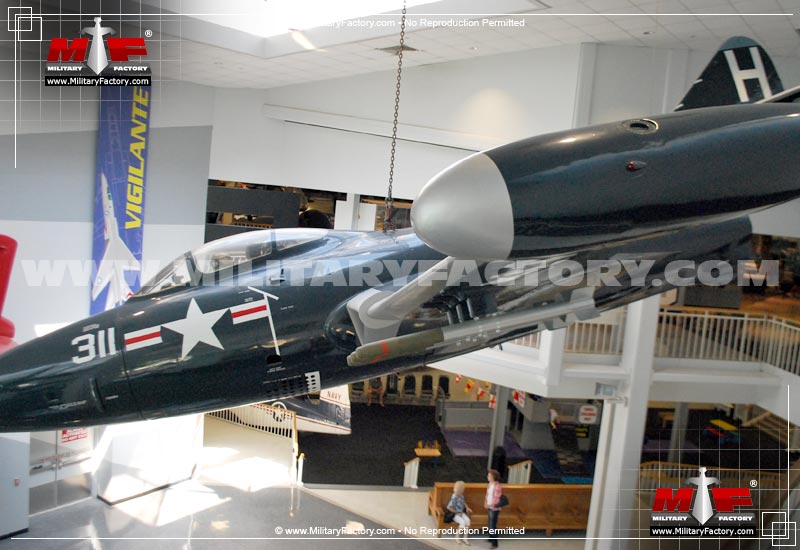 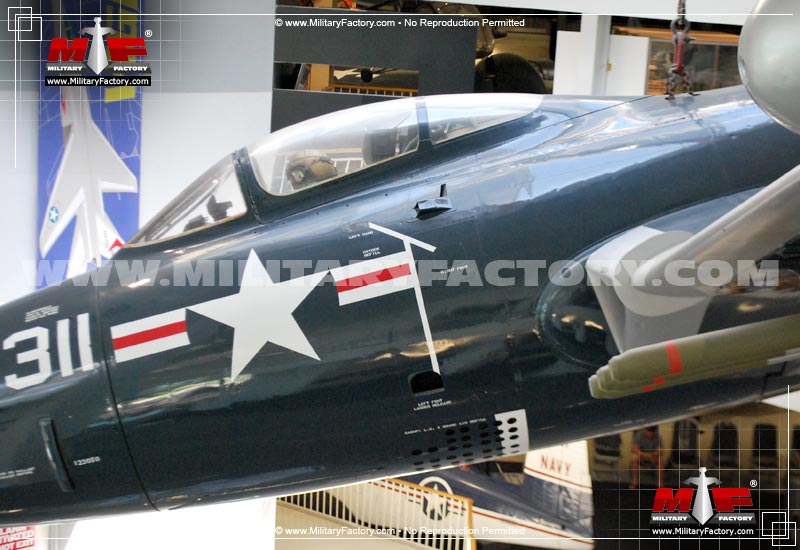