The HAL HF-24 Marut became the first indigenous jet fighter of India and the first supersonic type to be developed by the company. 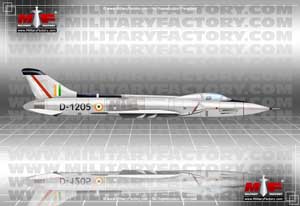 The modern Indian Air Force (IAF) has a relatively young history when compared to world heavyweights but strides have been made at supporting a local military industrial effort to make the nation a self-sustained world military power. The journey has included endeavors such as the HAL HF-24 "Marut" ("Spirit of the Tempest"), India's first jet-powered fighter. Design of the aircraft was headed by famous German aviation engineer Kurt Tank (creator of the classic World War 2-era Focke-Wulf Fw 190 piston-powered fighter) and involved Indian engineering from Hindustan Aircraft Limited (HAL).

Despite its promising nature, only 147 Maruts were ever completed and the aircraft appeared in service for only a short time, being retired from frontline service in 1985 after a career that began in the 1960s. It only ever served the IAF and was not exported in any form while its legacy showcased an aircraft that proved expensive to develop that produced only marginal results in service.

Years removed since the close of World War 2 (1939-1945) - and ultimately gaining independence from the British crown - the Indian Air Staff set to work on a jet fighter project that would allow the nation a new form of independence, this from military reliance from abroad. With little or no turbojet development experience on hand, the ministry hired Kurt Tank to help begin a new chapter for the Indian Air Force. Tank set about to create an aircraft from the experience gained during and after the war related to swept-wing, jet-powered designs. Along with his expertise, about a dozen more German engineers joined the fray, relocating to India to assist with the challenging project.

Prior to Tank's arrival, he worked in Argentina with his team to provide a new swept-wing, jet-powered combat aircraft for the Argentine military. One design concept became the FMA IA-43 "Pulqui" ("Arrow") which featured the classic 1950s fighter form - nose-mounted intake, forward-set cockpit, "T-style" tail unit, and swept-back wing mainplanes. Its qualities were noticeably from the such aircraft developments as the late-war Focke-Wulf Ta 183 "Huckebein" jet-powered fighter. Despite a first flight of the Argentine aircraft on June 27th, 1950, only five were ever completed and the design came to nothing by the end.

Design work on the all-weather, Mach 2- capable Indian fighter began in 1957. The "X-241" was developed as a full-scale research glider to prove the concept sound at low cost. First flight (by towing) was on April 3rd, 1959 and over 85 flights followed until a failed nosewheel leg led to a crash landing. A full-working prototype reached the skies on June 17th, 1961 and featured twin turbojet engines developing nearly 5,000 lb of thrust each, a single-seat design, and low-mounted swept-wings along a basic cylindrical fuselage. The tail unit featured a single vertical fin with low-mounted elevators along the fuselage sides.©MilitaryFactory.com
Advertisements

The design advanced as the "Marut" and entered service in a Mk 1model form during 1967. As the Indian government had pushed ahead with an indigenous nuclear program, more promising engine installations became limited from foreign suppliers which forced the Mk 1 to take on a pair of British Bristol Siddeley Orpheus Mk 703 series turbojet engines of 4,850 lb thrust each. Engine production was therefore local through paid license. Maximum speed reached 690 miles per hour with a combat radius out to 245 miles and service ceiling of 45,100 feet. The forced selection of the Orpheus would forever limit the combat capabilities of the Marut as a frontline fighter and its role therefore moved along the lines of a fighter-bomber / strike platform instead.

Standard armament of the Marut became 4 x 30mm ADEN cannons with 120 rounds fitted per gun installation. A retractable rocket pack with 50 x 68mm (2.68") rockets also became a part of the Marut's armament suite and there were four underwing hardpoints for the carrying of up to 4,000 lb of external ordnance - mainly conventional drop bombs and rocket pods.

The Mk 1 existed as the dominant service model in the Marut legacy. Mk 1T designated aircraft were eighteen two-seat airframes utilized for the training role. The Mk 1A was an early pre-production aircraft outfitted with Bristol Siddeley "Orpheus" 703 afterburning engines providing up to 5,720 lb of thrust each but was not furthered into a production form. The Mk 1 BX served as a testbed for the Egyptian Brandner E-300 turbojet engine and nothing more. The Mk 1R were two production Maruts fitted 2 x Bristol Siddeley Orpheus 703 afterburning engines of 5,720 lb thrust each. The Mk 2 was a proposed Marut fighter variant with a pair of Rolls-Royce Turbomeca "Adour" engines - though this mark never saw the light of day as a production fighter either.

The HF-24 went on to stock three total IAF units - Nos 10, 31, and 220 - and on-call strength was never to be more than sixteen or so ready aircraft. First combat actions were recorded during the Indo-Pak War of 1971 where the type proved a sound attack platform despite its performance limitations. None were lost to Pakistani interceptors and fighters directly though at least four were downed by ground-based fire and two destroyed while on the ground. Its only air kill came on December 7th, 1971 when a Marut pilot downed a Pakistani Air Force North American F-86 "Sabre" jet fighter. During the conflict the Marut showcased good survival qualities based on after-action reports - several instances saw Maruts arriving back home under the power of a single engine.

India's first homegrown fighter did not meet overall expectations during a period when other global offerings proved much more advanced. 1975 saw the Marut production run reach the century mark (100 aircraft) but the line had already become woefully outdated by then-modern standards and held little in the way of advancement despite the cost and development work already sunk into the program. At the very least, the Marut served to provide a newly-independent nation much valuable experience in the world of military aviation - from concept and design to development and production of nearly all related systems, including the all-important engines, and helped to influence similar aviation initiatives that lay for the nation in the decades ahead.©MilitaryFactory.com
Note: The above text is EXCLUSIVE to the site www.MilitaryFactory.com. It is the product of many hours of research and work made possible with the help of contributors, veterans, insiders, and topic specialists. If you happen upon this text anywhere else on the internet or in print, please let us know at MilitaryFactory AT gmail DOT com so that we may take appropriate action against the offender / offending site and continue to protect this original work.
Advertisements

India
(OPERATORS list includes past, present, and future operators when applicable)
✓ Air-to-Air Combat, Fighter
General ability to actively engage other aircraft of similar form and function, typically through guns, missiles, and/or aerial rockets. ✓ Ground Attack (Bombing, Strafing)
Ability to conduct aerial bombing of ground targets by way of (but not limited to) guns, bombs, missiles, rockets, and the like. ✓ Close-Air Support (CAS)
Developed to operate in close proximity to active ground elements by way of a broad array of air-to-ground ordnance and munitions options. ✓ Training (General)
Developed ability to be used as a dedicated trainer for student pilots (typically under the supervision of an instructor).

(Showcased performance specifications pertain to the HAL HF-24 Marut production variant. Performance specifications showcased above are subject to environmental factors as well as aircraft configuration. Estimates are made when Real Data not available. Compare this aircraft entry against any other in our database or View aircraft by powerplant type)
STANDARD:
4 x 30mm ADEN internal cannons
50 x 68mm (2.68") MATRA rockets in retractable underside launcher pack.

(Not all ordnance types may be represented in the showcase above)
Hardpoint Mountings: 4 (all underwing)

General Assessment
Firepower
Performance
Survivability
Versatility
Impact
Values are derrived from a variety of categories related to the design, overall function, and historical influence of this aircraft in aviation history.
Overall Rating
The overall rating takes into account over 60 individual factors related to this aircraft entry.
60
Rating is out of a possible 100 points.
Relative Maximum Speed
Hi: 750mph
Lo: 375mph
This entry's maximum listed speed (691mph). 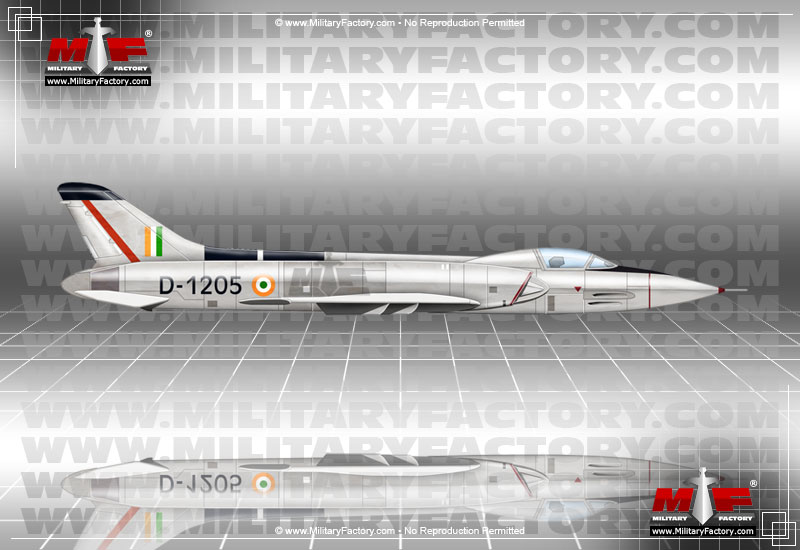