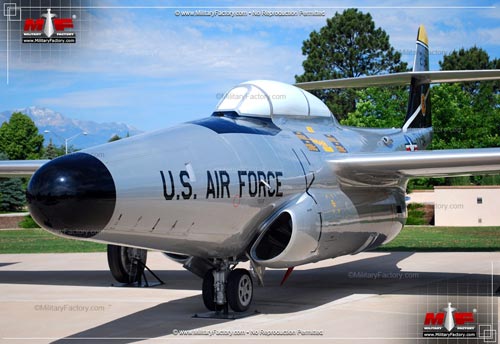 The Northrop F-89 Scorpion delivered a decade of service to the United States Air Force, charged with the critical defense of the upper North of the American continent from Soviet bomber incursions during the Cold War. The design was a relatively large two-seat, jet-powered fighter-type interceptor aircraft specifically designed to a USAF specification intended to replace the outgoing, propeller-driven Northrop F-61 "Black Widow" and North American F-82 "Twin Mustang" aircraft with origins in World War 2. The USAF commissioned work on the program in 1945 which resulted in a first flight of the XP-89 prototype on August 16th, 1948. The F-89 Scorpion was officially introduced in September of 1950 as the newest USAF dedicated interceptor.

The F-89, itself, was largely conventional for the time, arranged with an internal twin-engine turbojet configuration and air intakes mounted low along the fuselage sides. The engines exhausted from individual ports under and behind each wing root at the base of the empennage. One of the more novel design features was use of the "deceleron" control surface which was utilized as a "speedbrake" for lining up behind potential targets prior to firing. The aircraft was managed by two crewmembers - the pilot in the forward cockpit with the radar operator in the rear. The elongated nose cone assembly housed a powerful radar system that would be utilized for the required interception sorties. The wings were straight assemblies fitted at amidships and (eventually) capped with wingtip-mounted unguided rocket pods in streamlined nacelles (up to 104 x "Mighty Mouse" rockets were housed altogether). Additionally, later Scorpion models could be outfitted with a combination load of Falcon air-to-air missiles and Mighty Mouse rockets - all intended to bring down large enemy bombers. While not granted exceptional performance benefits in her design (no thanks to the use of straight wings lacking any sweep), the F-89 was gifted with a service ceiling that allowed the system to avoid potentially lethal low-altitude confrontations with ground-launched missiles or enemy interceptors. When at rest, the F-89 certainly promoted a very distinct low-set profile, its fuselage belly nearly skirting the turf. The undercarriage was wholly retractable and consisted of two single-wheeled main legs under the wings and a single-wheeled nose leg under and ahead of the cockpit floor.

internally, and the main reason for the aircraft's existence and success, the ultimate form of the F-89 was equipped with the then-powerful AN/APG-40 series radar suite coupled to the AN/APA-84 computer system capable of tracking aerial targets up to 50 miles out. The system was tied to the technologically-laden Hughes fire control system (FCS) which featured an integrated advanced autopilot function. All told, the collective system was designed to be able to track targets, guide the aircraft to within range of the onboard armament and automatically engage targets without pilot input.

The F-89 series served the USAF primarily throughout the tumultuous 1950s in a frontline capacity before being relegated to second line duty the decade following. All F-89 versions were then out of service by the end of the 1960s after some 1,050 examples had been delivered. At the time of its inception, the F-89 marked two "firsts" becoming the first operational combat-level aircraft outfitted with nuclear-tipped air-to-air weaponry (in the Genie rocket) and the first USAF jet-powered fighter to support guided munitions. Ex-USAF mounts were transferred to the Air National Guard for the remainder of her days. The last F-89 was retired from ANG service in July 1969.
Advertisements

Operational production variants were preceded by the original XF-89 prototype (2 x Allison J-35-A-9 engines of 4,000lbs thrust each) which was followed by the XF-89A prototype (J-35-A-21A engine of 5,100lbs thrust each - 6,800lbs thrust with afterburner). The initial production model (essentially operational evaluation mounts) became the F-89A of which only eight were produced and these were slightly different from the prototypes in that their tailplanes were modified. Additionally, these production models fitted 6 x cannons as base armament. The F-89B was the second production airframe which incorporated an improved avionics package and 40 of the type were produced by Northrop, eventually dogged (and ultimately limited) by engine issues. These were naturally followed into service by the improved F-89C with their 2 x J-35-A-21/-33 series engines of 5,600lb/7,400lb thrust each. however, wing integrity issues eventually plagued all three of these early marks which limited them in many ways - especially production numbers.

The definitive production mark of the Scorpion line became the F-89D (born of a modified F-89B as the "YF-89D") which did away with the onboard internal cannon arrangement and brought about use of wingtip rocket launchers instead. The type was further advanced by the installation of the Hughes E-6 FCS, AN/APG-40 radar with AN/APA-84 series computer. The F-89D was produced in 682 examples, far outweighing all previous marks in the series by numbers alone. The F-89 enjoyed a listed maximum speed of 635 miles per hour with an ferry range of 1,360 miles. It could hit service ceilings of near-50,000 feet altitude and rise to intercept at 7,440 feet per second on full afterburner thrust. Overall bomb load was limited to 3,200lbs of externally held ordnance.

The F-89D was then followed by the F-89H of which 156 were produced (developed from three F-89D modified models under the "YF-89H" designation). These incorporated the E-9 fire control system with support for 6 x GAR-1/-2 Falcon semi-active homing/infrared (respectively) air-to-air missiles along with 42 x FFAR (Folding-Fin Aerial Rockets).

Some 350 F-89D models were later converted to the "F-89J" standard (Project Ding Dong) which utilized several underwing stations for 2 x MB-1 Genie nuclear-tipped air-to-air rockets alongside 4 x Falcon air-to-air missiles. Fuel pods or rocket pods could also be carried along the wingtip mounts as normal. During "Operation Plumb Bob" over Nevada on July 19th, 1957, the F-89J became the first aircraft to ever fire and detonate a nuclear-tipped rocket.

The "DF-89A" designation was given to ex-F-89A airframes converted to drones. Similarly, "DF-89D" drones were based on the F-89B production mark.

The F-89 was proposed or trialed in several other forms prior to its end days. The YF-89E served as a single prototype (a converted F-89C production model) for the Allison YJ71-A-3 engine of 7,000lb dry and 9,500lb afterburner engine. The F-89G was a proposed variant to be finished with the Hughes MA-1 fire control system and support for GAR-1/GAR-2 Falcon air-to-air missiles. The F-89F, another proposal, was given an all-new fuselage and wing design while incorporating the J71 series turbojet engine - alas, this mark was also not selected for serial production.

In the end, the F-89 proved a viable dedicated bomber interceptor and established a presence as a potent deterrent while providing technological stepping stone to future like-minded interceptor designs to follow. Its incorporation of an integrated autopilot system with tracking and targeting radar along with automatic weapon function would usher in a new age of interceptors that, in turn, would lead to all-new, more technologically evolved designs.
Advertisements

(Not all ordnance types may be represented in the showcase above)
Hardpoint Mountings: 5 (including wing tip mounts) 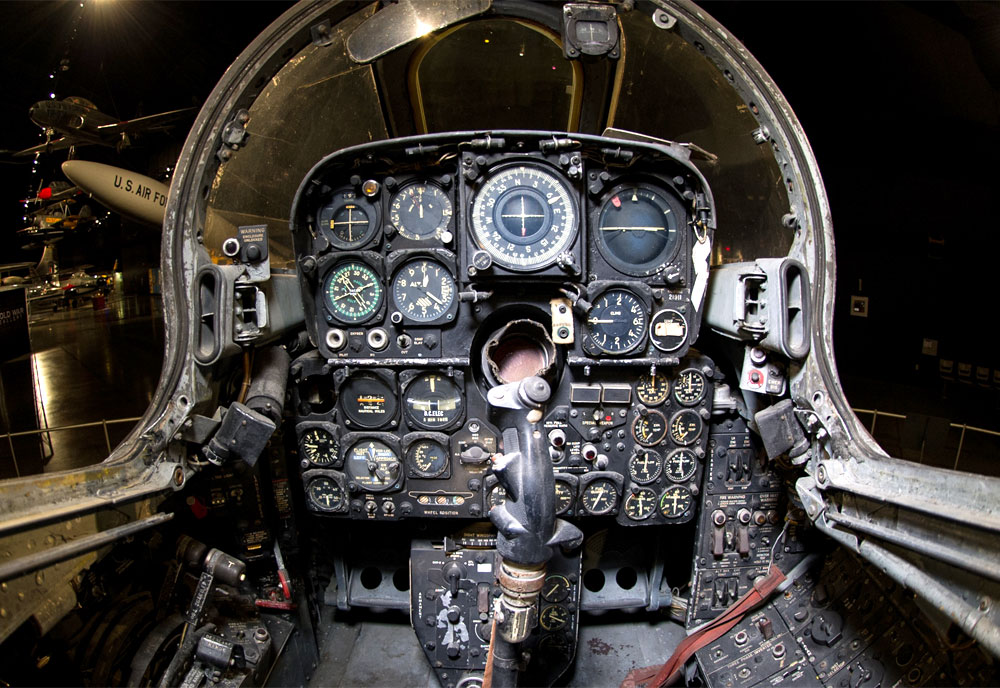 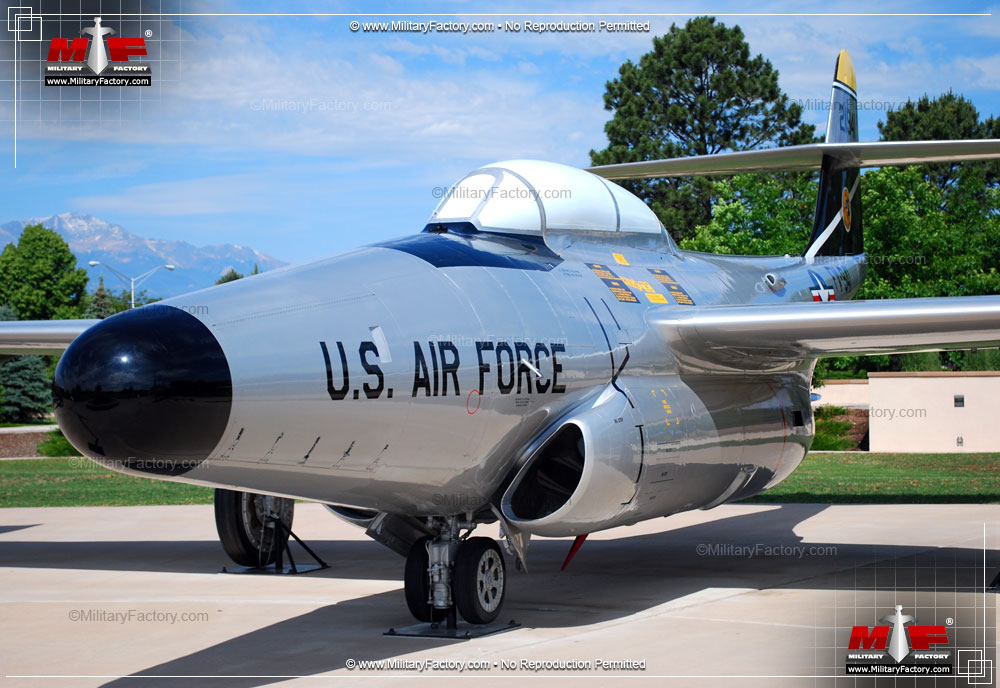 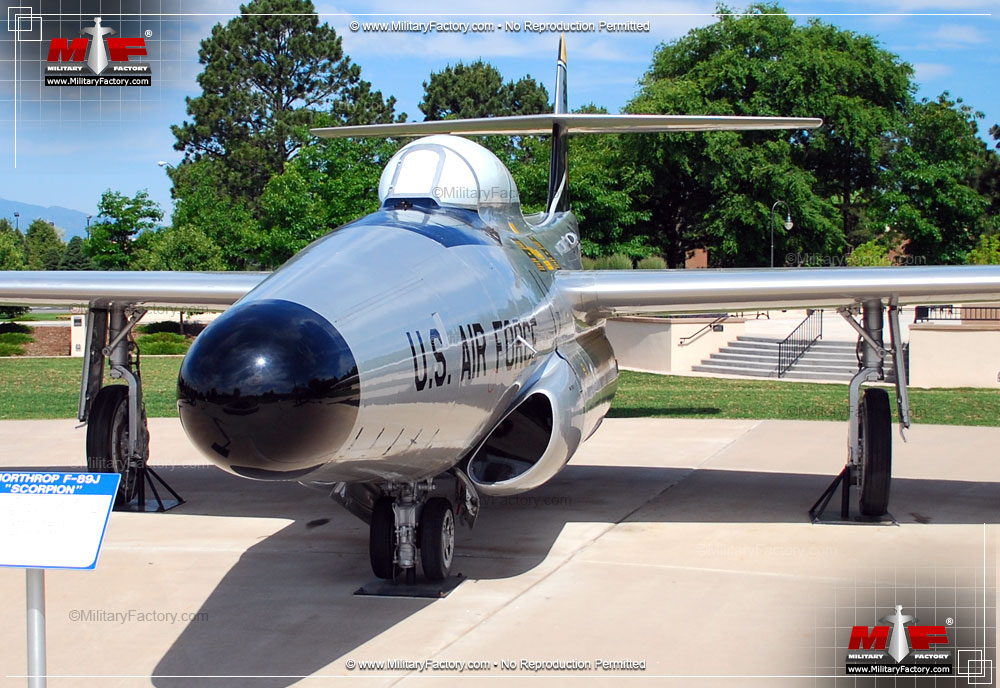 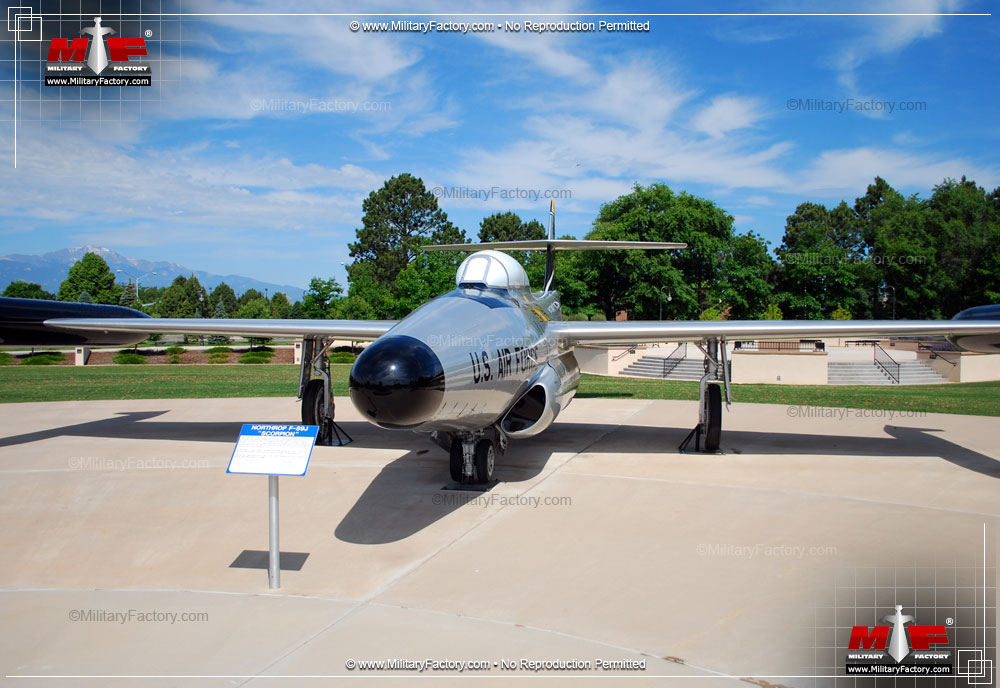 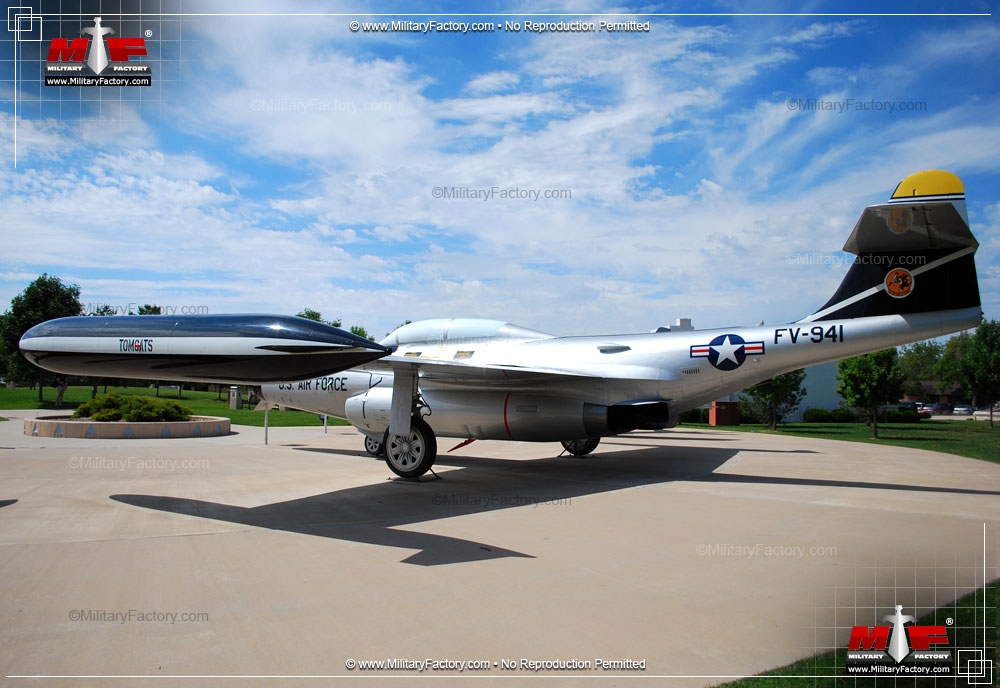 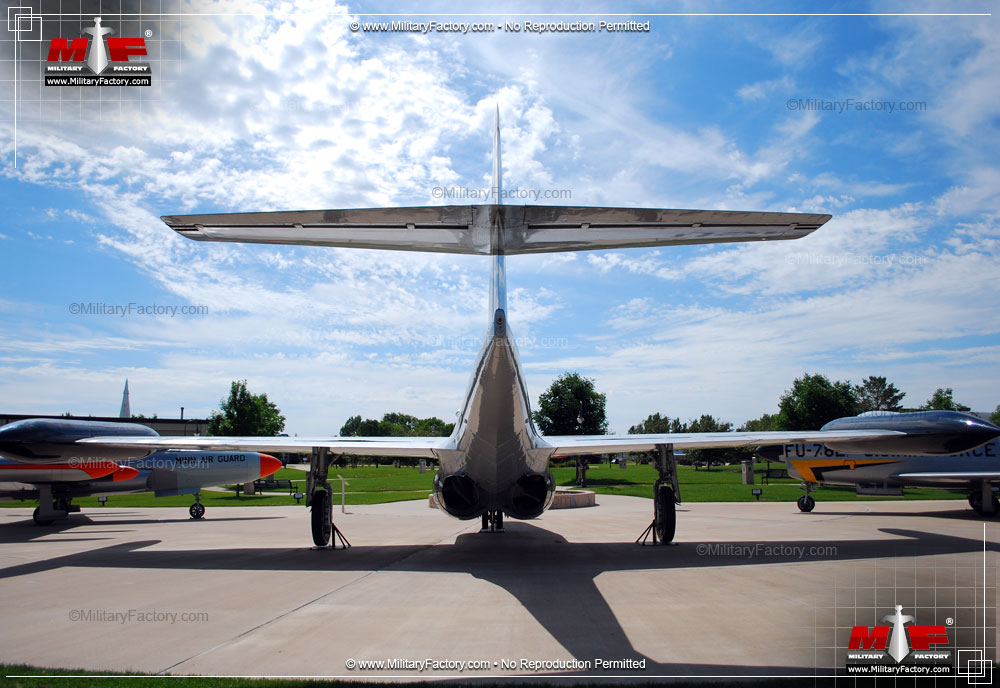 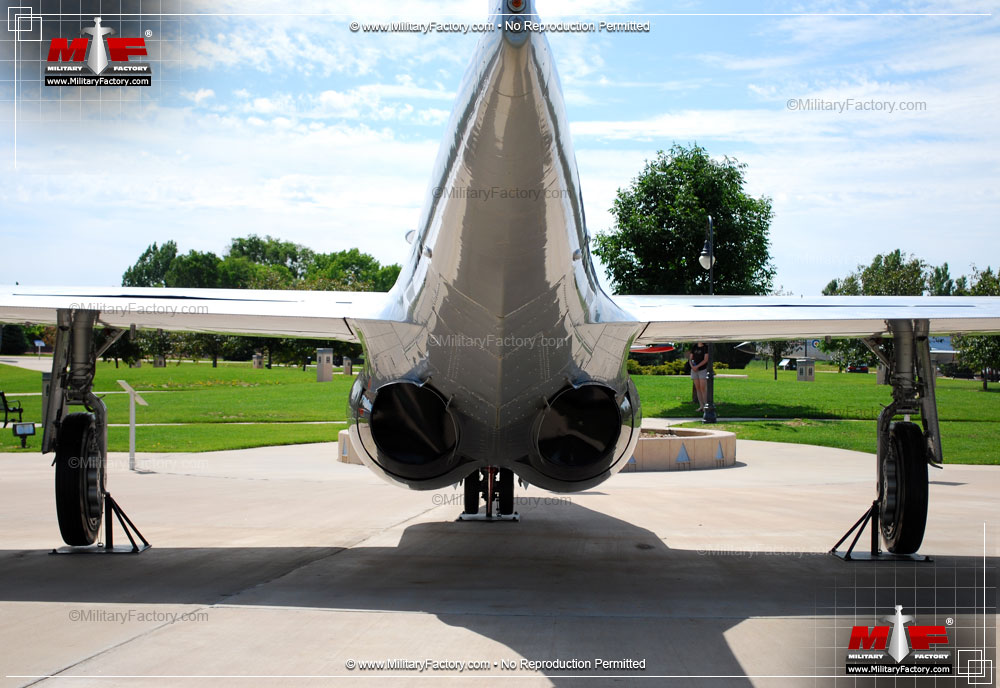 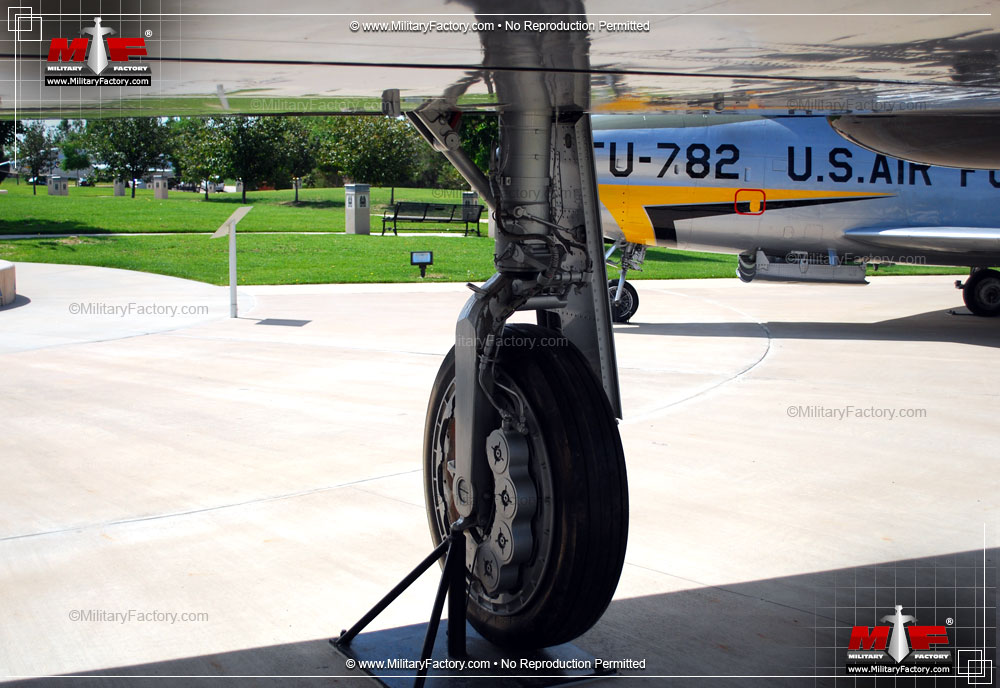 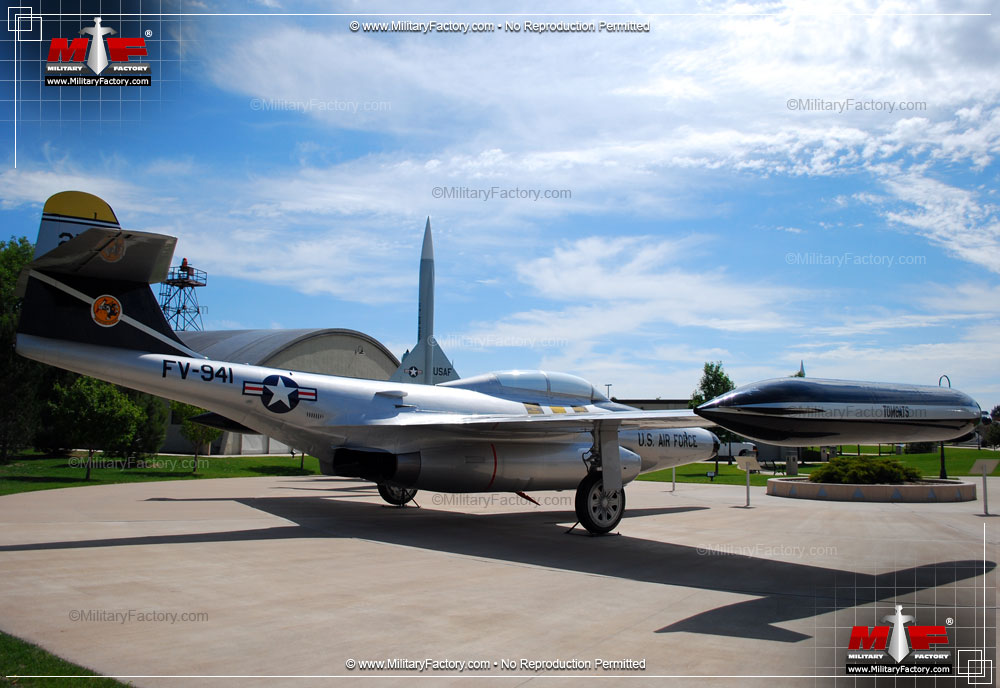 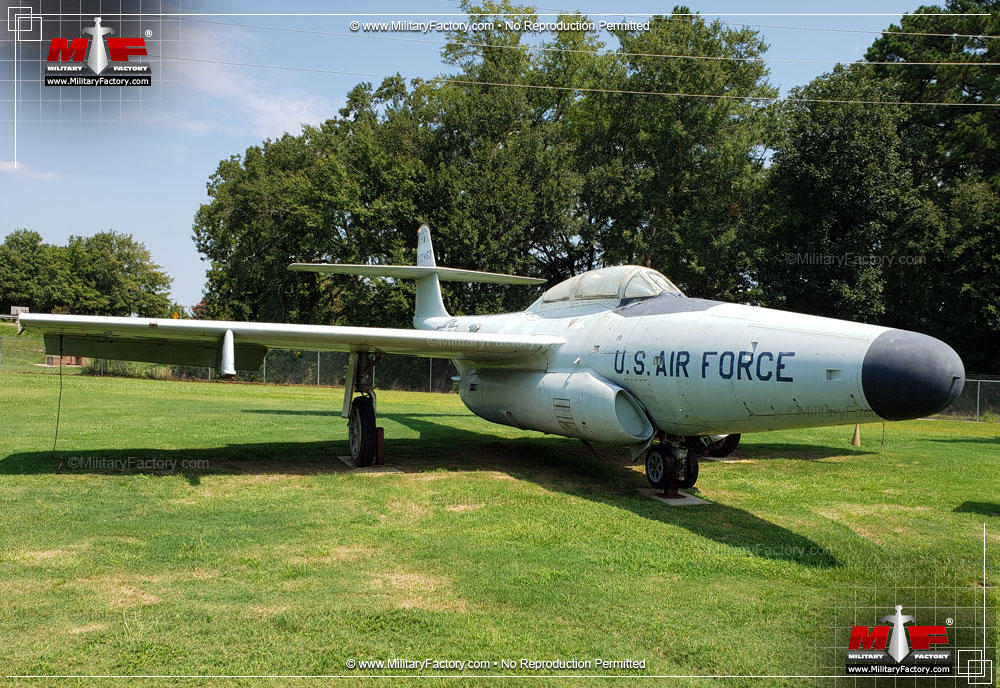 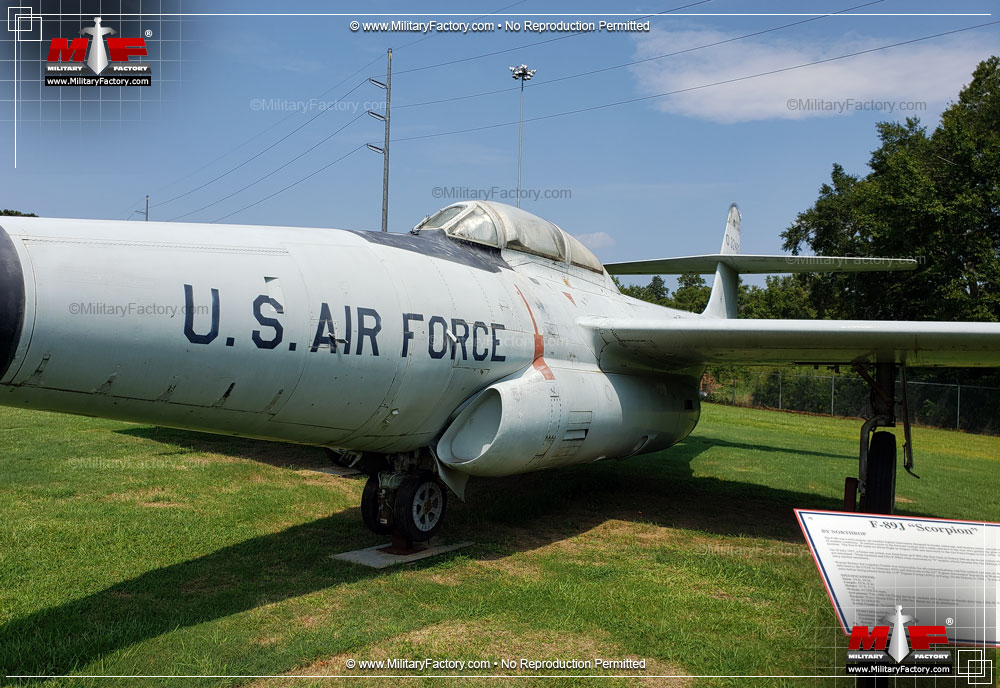 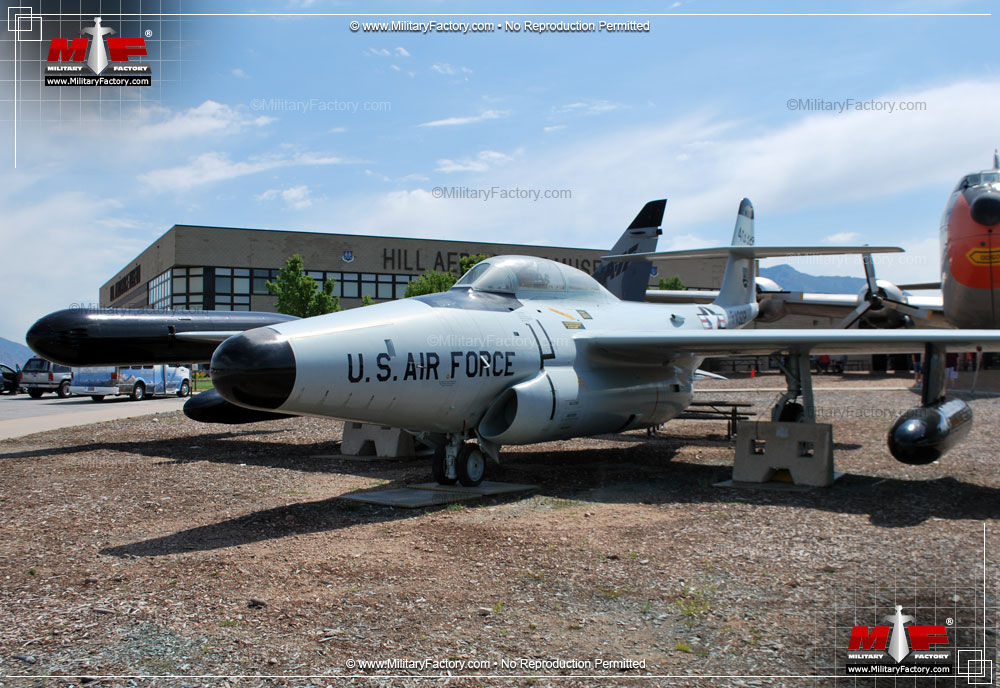 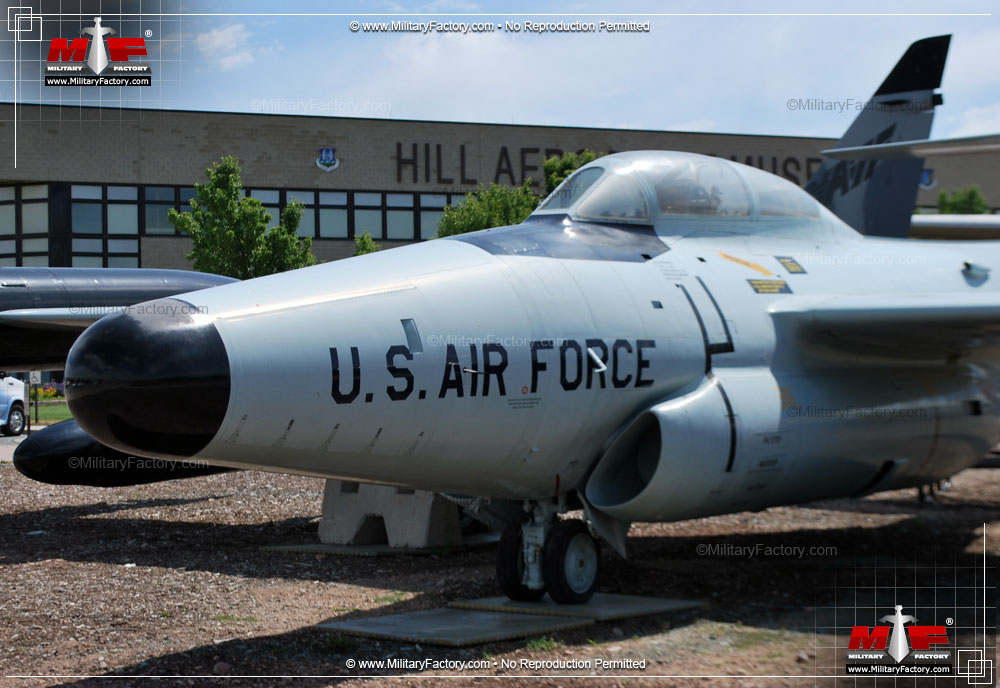 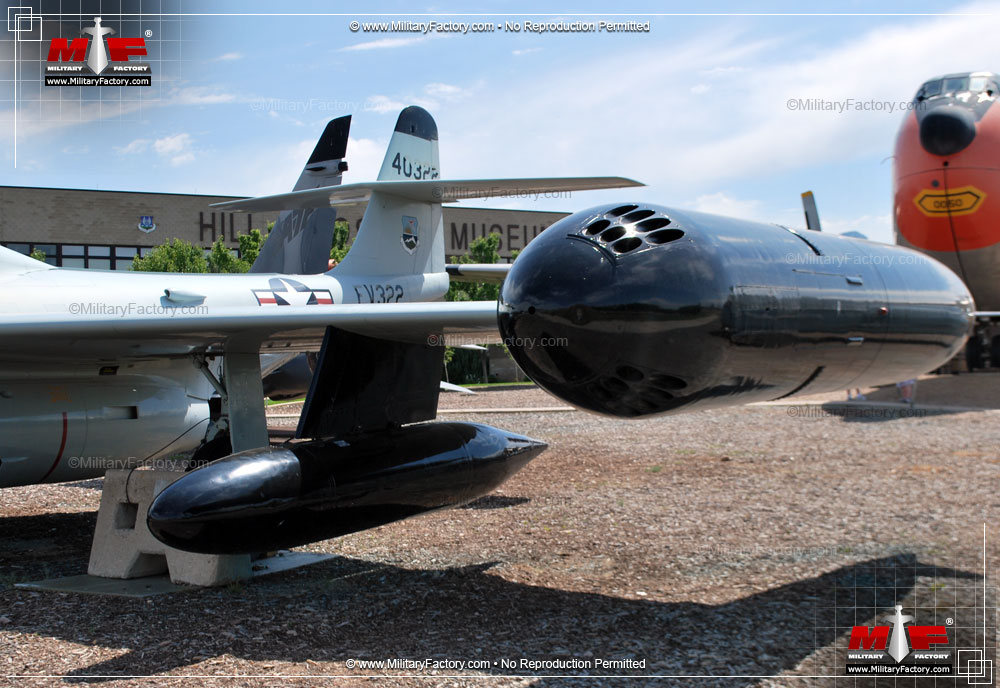 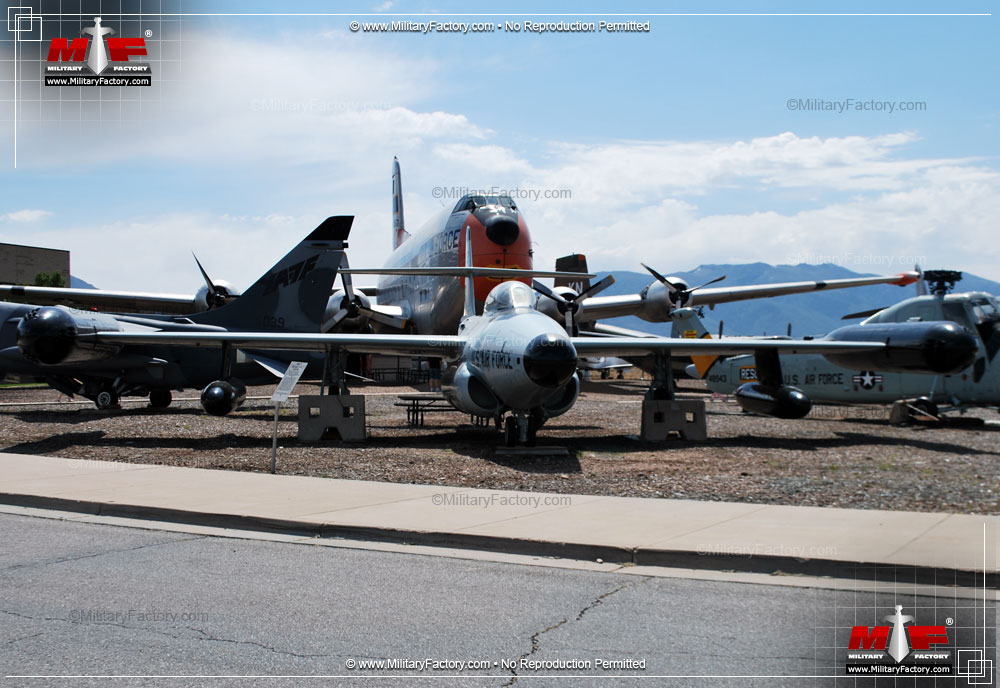 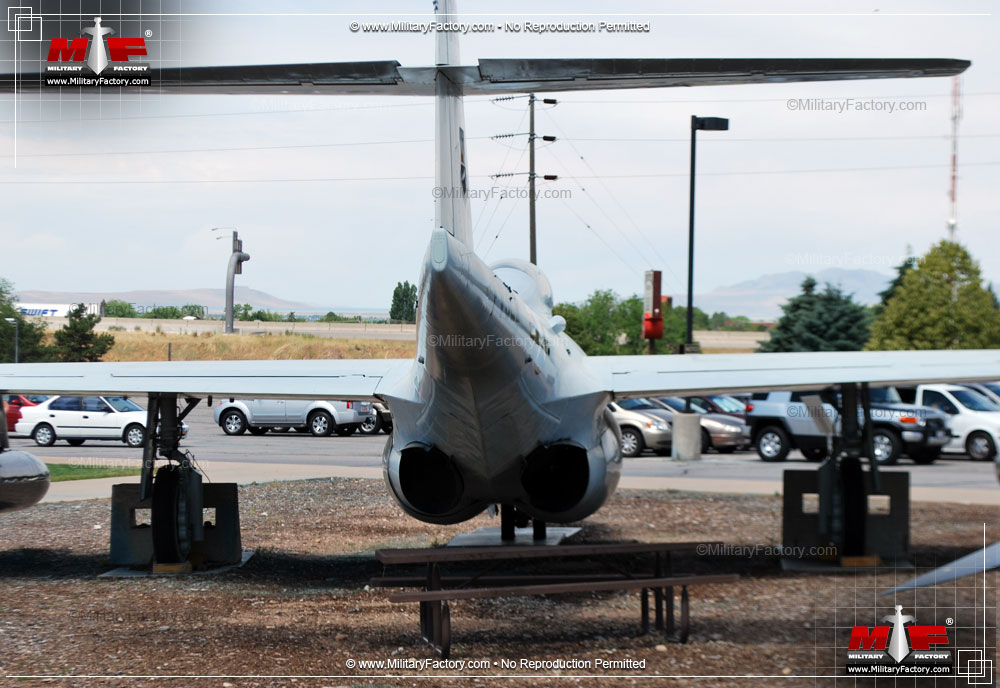 Aviation developments of similar form and function, or related to, the Northrop F-89 Scorpion...